Two men have been jailed for a total of 70 years after murdering a mother and her four-year-old son by setting their house on fire because of a £400 drugs debt.

The blaze killed Gina Ingles, 34, and her son Milo Ingles-Bailey, while her partner, Toby Jarrett, spent months in hospital after jumping from the first floor window of the house in Eastbourne, East Sussex.

Fire investigators found Ms Ingles crouching over her deceased son, with the pair huddled under a windowsill in their burnt-out bedroom. A dog they were looking after for a friend was found dead next to them.

The blaze was started in the dead of night after petrol poured through the front door was ignited at the home on July 10, 2018.

Firefighters found a burning fuel can outside the house – an item which became a vital piece of evidence in a murder case that took detectives to Portugal and back.

Jacob Barnard, 32, and his enforcer Andrew Milne, 42, were each found guilty of two counts of murder and one of attempted murder, following a trial, and appeared at Brighton Crown Court on Friday for sentencing. 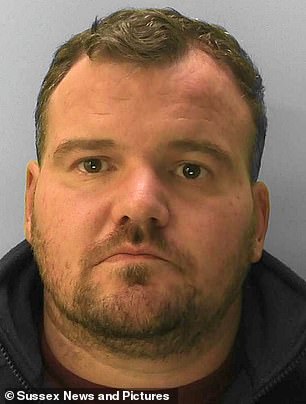 Jacob ‘Jake’ Barnard (pictured left), 31, and henchman Andrew Milne (right), 42, were convicted of murdering Gina Ingles, 34, and her son Milo Ingles-Bailey and the attempted murder of Toby Jarrett by setting fire to the family home 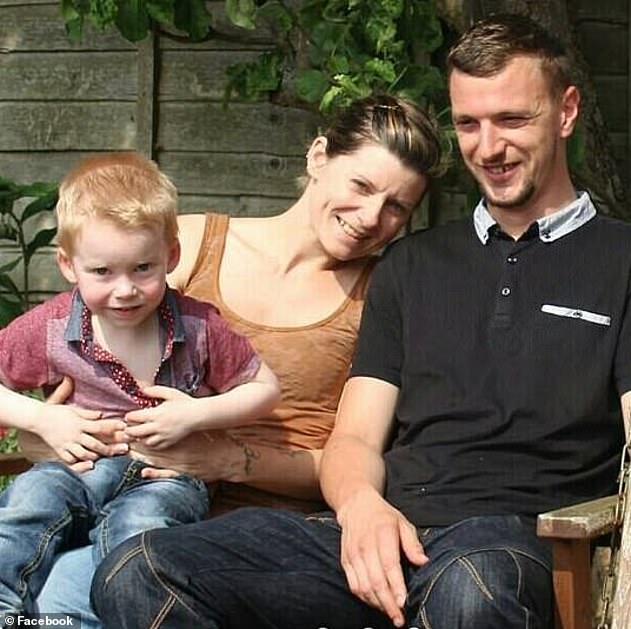 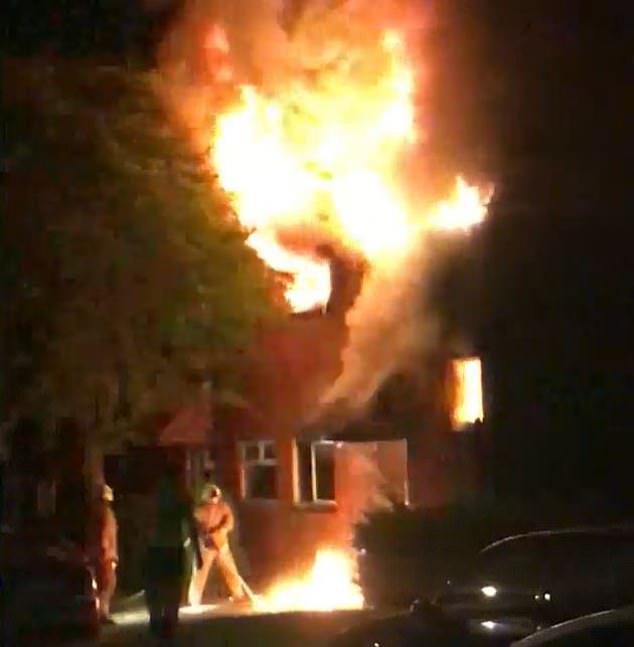 The blaze (pictured) was started in the dead of night after petrol poured through the front door was ignited at the home on July 10, 2018

Another man, 31-year-old John Tabakis, was convicted of perverting the course of justice and will be sentenced at a later date.

Jayne Ingles, whose daughter and grandson lost their lives in the blaze, said her family will ‘never understand’ what happened.

In a statement read out by the prosecution she said: ‘I still close my eyes and imagine Gina waking to find the house on fire.

‘Today, even as justice is done, it doesn’t really change a thing for us, it doesn’t bring Gina and Milo back to us.’

Mrs Justice Philippa Whipple spoke of the suffering of Ms Ingles and her son Milo as the fire ripped through the house. 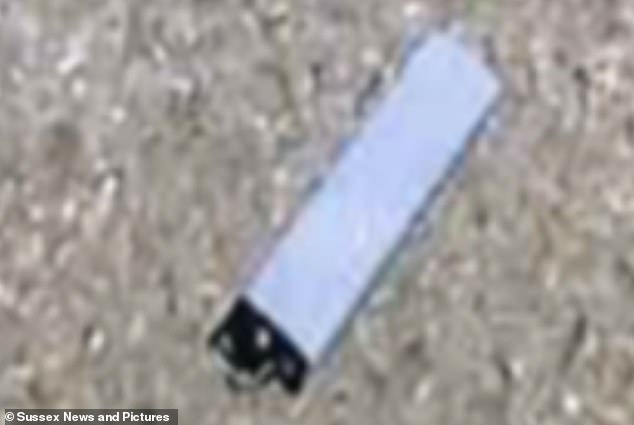 She said: ‘They must have been terrified in their last moments as smoke and fire engulfed them.’

Sentencing Barnard and Milne, she said they ‘gave no warning’, adding: ‘This was a crime under cover of darkness, a crime of stealth and cowardice. They lit the fire and then disappeared into the night.’

They are believed to be the two men seen walking away from the fire, as captured on CCTV.

DNA recovered from the burning fuel can matched Milne, who is believed to have acted as Barnard’s muscle, collecting unpaid debts, by force if necessary.

The deliberate fire was Barnard and Milne’s way of enforcing a drugs debt, police say. 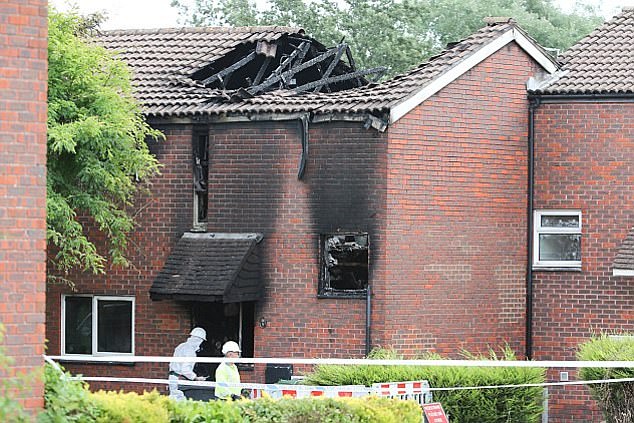 Investigators said patterns of burning showed fire started in the hallway and spread up the staircase to the top floor and roof (pictured: forensic officers at the family home in Eastbourne)

The court heard that the debt may have been about £400. Police raided Milne’s address and found machetes, knives, a Taser, and a balaclava.

A police pursuit of Barnard led them to Portugal, where he was interviewed and later extradited to the UK to face murder charges.

Senior investigating officer Gordon Denslow said: ‘This was a carefully planned, cowardly, but horrific attack carried out by Barnard and Milne in the middle of the night against a defenceless family.

‘Tabakis then knowingly tried to help them get away with their crimes by driving the car they used during the attack to Portugal, just hours afterwards.’

Firefighters took more than two hours to douse the fire.

The couple leapt out of bed with Ms Ingles heading straight to her son’s room. 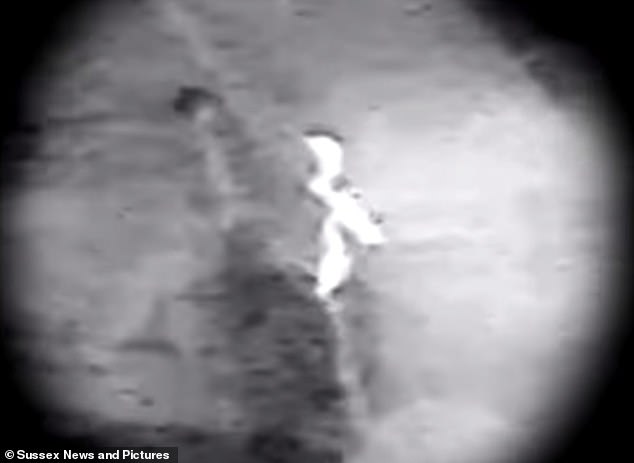 As flames lapped the walls, she grabbed Milo from his bed and ran back across the burning landing to her room.

Mr Jarrett was badly burned as he crossed the landing after her. He fell to the ground after balancing on the bedroom windowsill.

Kate Lumsdon QC told the jury: ‘Struggling to his feet, he shouted to Gina to pass Milo down to him. There was no reply. He shouted and shouted but he could not see Gina or Milo.

‘Days later, when the house was assessed as safe to enter, the remains of the bodies of Gina and Milo were found in Gina’s bedroom, under the window.

‘Gina was crouching over Milo, protecting him.’ 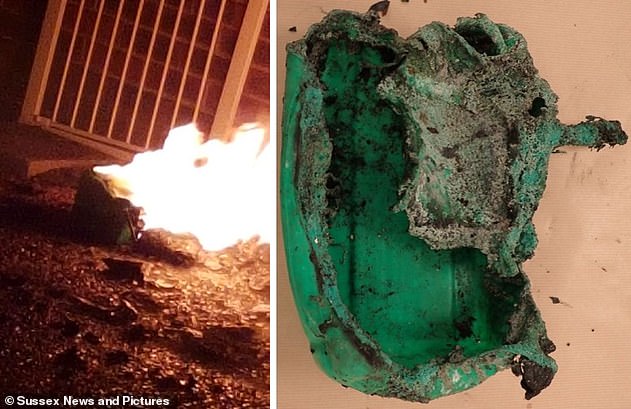 Ms Lumsdon told the court: ‘Fire ripped through the small terraced house like a torch.’

The jury was told Mr Jarrett owed £400 to a local drug dealer. Ms Lumsdon said the fire was intended to send a message.

She said: ‘The general message sent out to the wider drug community – don’t mess with this drugs line.’

The fire took more than two hours to put out, the court heard.

Investigators said patterns of burning showed fire started in the hallway and spread up the staircase to the top floor and roof.

Toby Jarrett suffered partial full thickness burns to 40 per cent of his body, five fractured vertebrae in his back and a fractured pelvis.

One of the first firefighters on the scene noticed a burning green fuel can as he approached the front doorway. 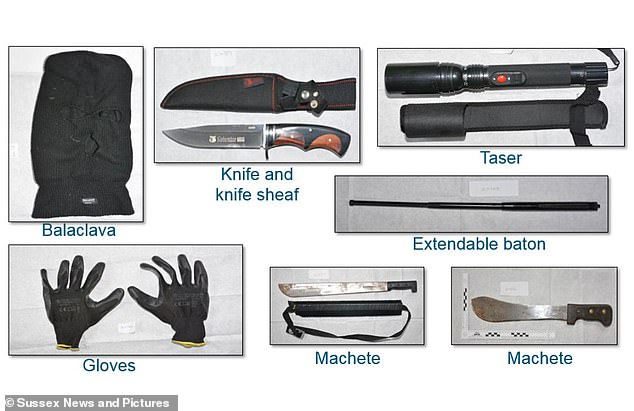 The weapons found in Milne’s shed. Police found a collection of knives, an extendable baton, a taser together with gloves and a balaclava

Barnard ran his drug empire from a villa in Macieira, Portugal, the court heard.

He dealt in second hand cars, buying them in the UK and taking them to Portugal to sell on.

Ms Lumsdon said: ‘He also dealt in drugs. He said that someone had owed him money and he wanted to make an example of him.

‘He said that he and 2a Scottish guy” had poured petrol through the letterbox and set fire to the house.’

Barnard was convicted of drugs offences in Portugal and jailed in June last year.

Milne, known as Scotty or Scottish, denied he was Barnard’s enforcer in the UK, Ms Lumsdon said.

Police uncovered a hoard of weapons when they searched Milne’s shed.

The cars used by Barnard and Milne. Barnard dealt in second hand cars, buying them in the UK and taking them to Portugal to sell on

They found a collection of knives, an extendable baton, a taser together with gloves and a balaclava.

In October 2018, Milne, originally from Glasgow, sent a text message to his girlfriend after she complained about having too much work.

He wrote: ‘Set it on fire and walk out but just as you leave drop the lighter like a mike xxxxx.’

On January 5 this year following extradition proceedings, Barnard was flown into Gatwick from Portugal and arrested.

He will be returned to Portugal to finish his sentence there.