Two grown men were busted having a ‘Harry Potter style’ fight with tree branches over a road rage incident.

The two men reportedly broke out into a fight after one man honked at the other from his car while he attempted to cross the street in Cabramatta, southwest Sydney, on Saturday afternoon.

Witness-captured footage of the strange fight has been viewed more than 34,000 times since it was uploaded on Saturday night.

The video shows the two men ran off the road into a small park.

Two men were spotted fighting each other with sticks, reportedly over a road rage incident

The man in a yellow high-visibility jacket repeatedly swiped at the man in a white shirt who readily swung back, both are armed with small sticks.

The men continued to lash at each other before the man in white ducked to the side to grab a bigger branch.

The man in yellow immediately stepped back from the fight and attempted to use his phone but the man in white continued to follow and hit out at him.

Eventually a third man stepped in to break up the fight and sent the men off to walk in opposite directions. 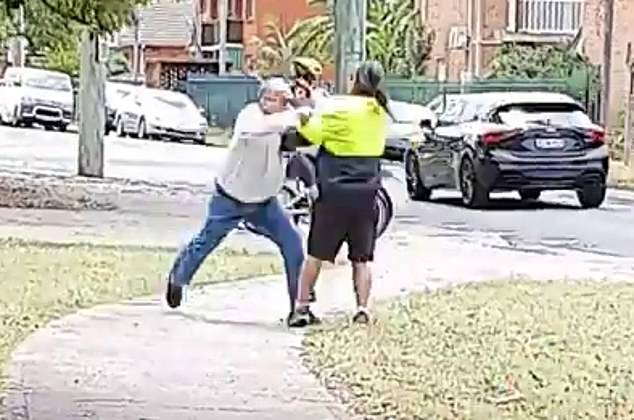 While the fight could have easily turned dangerous, commenters were quick to have a laugh at the men’s unusual weapons.

‘That’s quite the sticky situation,’ one person commented.

‘What in the Harry Potter is going on?,’ another asked.

‘They look like kids playing in the park with sticks! Where are their parents?’ one posted.