Two bungling assassins who shot an autistic ‘gentle giant’ on his own doorstep in a case of mistaken identity after they went to the wrong house have been found guilty of murder.

Chad Gordon, 27, was blasted in the face when he opened his door to the pair, who had travelled to his home in Tottenham, north London, on a stolen moped on May 18 last year.

The shooting was said to have been in revenge for the death of the killers’ friend, who had been stabbed five days earlier.

However, Mason Sani-Semedo, 19, and 20-year-old Cameron Robinson went to the wrong address and shot Mr Gordon instead, jurors heard.

Mr Gordon was ‘non-confrontational’ and had no involvement in criminal activity, the hearing at the Old Bailey was told.

His killers denied murder but were convicted after the jury considered their verdicts for 21 hours and 43 minutes.

Chad Gordon (pictured above), 27, described as a ‘gentle giant’, was ‘non-confrontational’ and had no involvement in criminal activity, the hearing at the Old Bailey was told 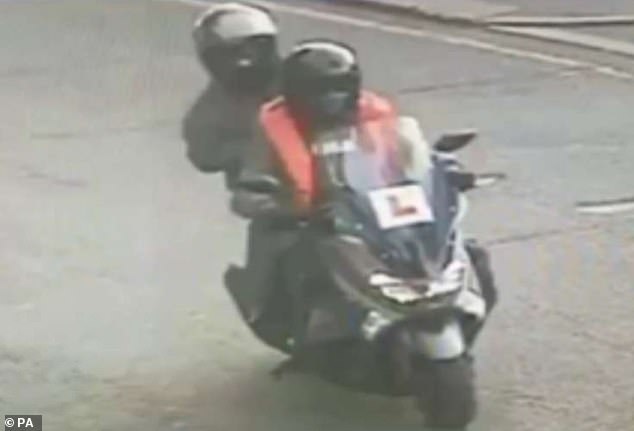 Mason Sani-Semedo, 19, and 20-year-old Cameron Robinson, the two gunmen who have been found guilty of murder, on a stolen moped moments before the shooting in May last year 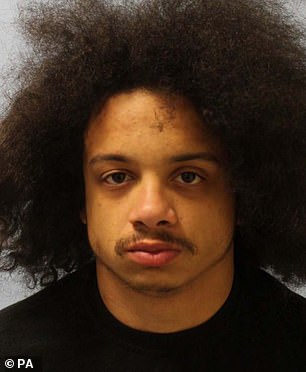 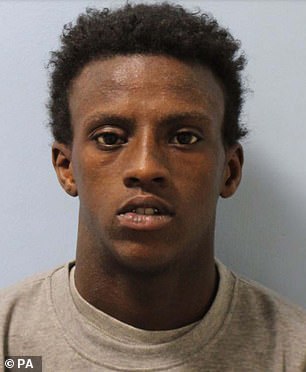 Robinson (pictured left), of Dagenham, and Sani-Semedo (right), of Tottenham, denied murder but were convicted after the jury considered their verdicts for 21 hours and 43 minutes

Mr Gordon’s father lowered his head and shook with emotion at the back of the court as his son’s killers were convicted.

Prosecutor Oliver Glasgow said neighbours of Mr Gordon were ‘not so popular’ and had been linked to the killing of a friend of the defendants.

At around 8pm they blasted Mr Gordon in the face with a 9mm pistol as he opened his front door, sending him to the ground with a ‘crash’, jurors heard.

The victim’s family and friends rushed to try and help him.

When Mr Gordon’s aunt confronted the killers they told her to ‘shut the f*** up’ and held her at gunpoint in front of a young child by her side, the court heard.

Mr Glasgow said: ‘The evening of Monday 18 last year was warm and sunny. Few of the residents of Haringey were outside enjoying the weather.

‘As a result of the travel restrictions that had been imposed as part of the first phase of national lockdown many people chose to remain indoors and the streets of London were eerily quiet.

‘The site of a moped being ridden by two riders therefore went unnoticed by many. Such a sight was not unusual, but the reason for the riders’ journey was anything but usual.

‘The two young men were armed with a 9mm handgun and together with the help of their friends they had set off on a plan to kill and destroy evidence that might link them to the violence that was about to take place.’

The stolen moped was alleged to be torched with a jerry can of petrol procured by Javarn Carter-Fraser, 23, while Clive Spencer and Talye Olabesi, both aged 24, prepared a change of clothes to help them escape undetected. 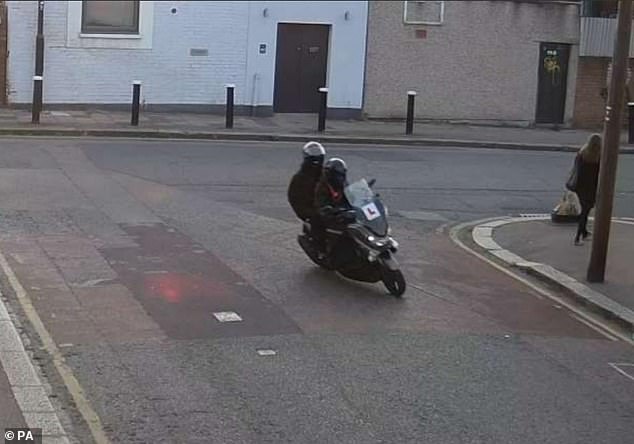 The pair on a moped before the shooting. Prosecutor Oliver Glasgow said neighbours of Mr Gordon were ‘not so popular’ and had been linked to the killing of a friend of the defendants 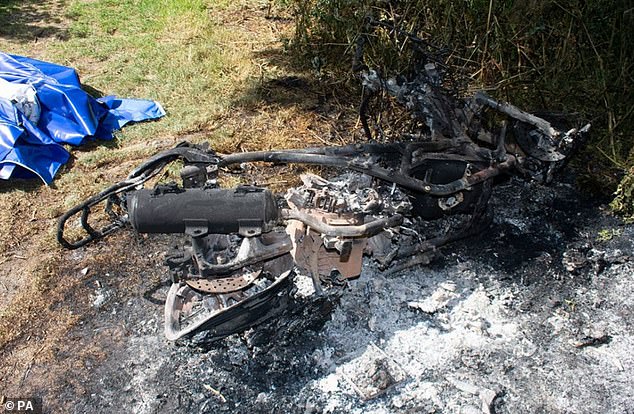 The burnt moped, which was allegedly torched with a jerry can of petrol procured by Carter-Fraser and later found in Lee Valley, that was used by Robinson and Sani-Semedo

Olabisi, Spencer and Carter-Fraser, who reached the semi-final in Britain’s Got Talent in 2015, were cleared of murder.

The court heard how Carter-Fraser, who has learning difficulties, had won trophies and toured as a dancer.

Giving evidence, he denied knowing anything about a murder plot.

He told jurors that Robinson had come to his house and asked him to store two crash helmets and some petrol.

On the day of the shooting, he was told to leave it in an alleyway by his house in Tottenham.

Mr Carter-Fraser said he had never questioned Robinson about it but assumed he was going to steal a moped to ride.

In his evidence, Olabisi also denied any involvement in the murder.

Mr Glasgow said the one part of the plan that had ‘not been properly thought through’ was the address the killers were targeting. 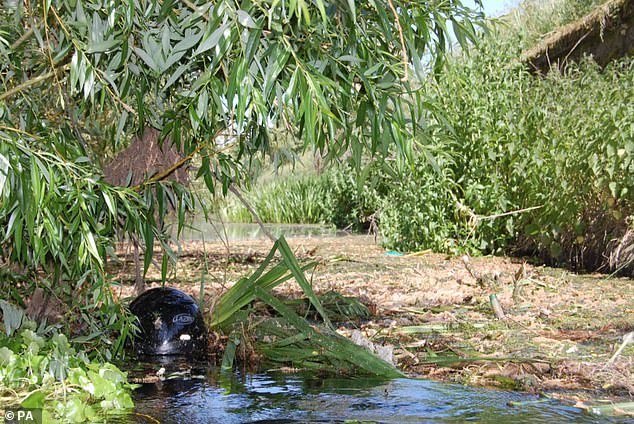 A helmet was also found in Lee Valley. Prosecutor Oliver Glasgow said the one part of the plan that had ‘not been properly thought through’ was the address the killers were targeting

He said: ‘While the actual identity of the intended target cannot be known with any certainty one thing is clear and that is the person the gunmen shot dead was not the man they meant to.

‘He was shy quiet and spent much of his time on his own but despite that he was a well-liked and polite young man and no one had an unkind word to say about him.

‘What made his murder such a tragedy is that it appears the gunmen went to his address by mistake.

‘He lived with his family. His immediate neighbours were not as popular with the local residents.’

Mr Glasgow added: ‘These defendants were responsible for planning and executing the shooting or seeking revenge for the death of their friend but in the end achieving nothing more than adding to the capital’s murder statistics last year.

‘The bullet struck Mr Gordon in the face and went straight through his head before lodging right in his skull. The damage was catastrophic and there was no chance of survival.

‘There was a crash as Chad Gordon collapsed to the ground. His family and friends were quickly beside him but there was nothing that could be done to save him.

‘They pointed the gun at his aunt. They told her to shut the f*** up. She threw herself to the ground and covered her young child who was with her. 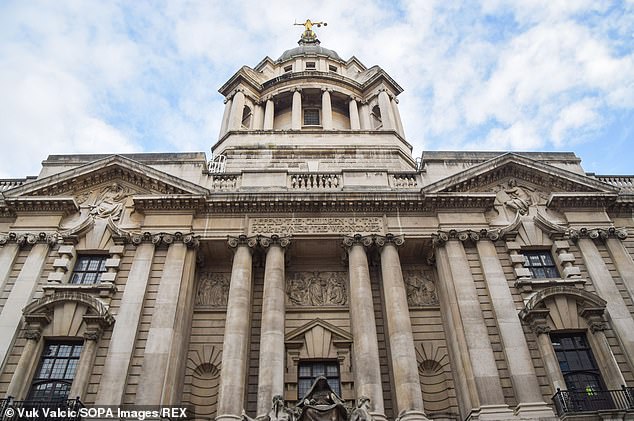 Robinson and Sani-Semedo denied but were convicted of murder and possession of a firearm with intent to cause fear of violence. They were remanded in custody ahead of their Old Bailey (file photo of court, above) sentencing on June 8

‘Mason Sani-Semedo and Cameron Robinson simply jumped on their moped and pulled away.’

Detectives collected hours of CCTV evidence for the prosecution, believed to be the largest amount in a Metropolitan Police homicide investigation.

Mr Glasgow said: ‘He’s described by his aunt as a gentle giant, non-confrontational with no involvement in any criminality.

‘No one who knew Chad Gordon can understand why he was targeted in such a violent and shocking way and most believe a mistake must have been made by his killers.’

Robinson, of Dagenham, and Sani-Semedo, of Tottenham, denied but were convicted of murder and possession of a firearm with intent to cause fear of violence.

They were remanded in custody ahead of their Old Bailey sentencing on June 8.

Olabisi, of no fixed address, Spencer and Carter-Fraser, both of Tottenham, denied and were cleared of murder.