‘Chief Twit’ Elon Musk has confirmed that he will be dropping the 280 character limit on Twitter ‘soon’.

The new social media boss made the announcement this morning while responding to an 82 tweet-long thread.

Users are currently restricted to tweets of 280 characters, but ditching this is one of a long list of promises Musk has made regarding the future of the site.

He first broached the subject pre-takeover, in April, where he expressed that ‘Twitter is *way* overdue for long form tweets‘.

Then, at the end of last month, he replied ‘absolutely’ to another Twitter user asking if he could ‘get rid of character limits’.

However, despite these claims, Musk also revealed yesterday that he plans to reduce his time at the company and eventually find a new leader. 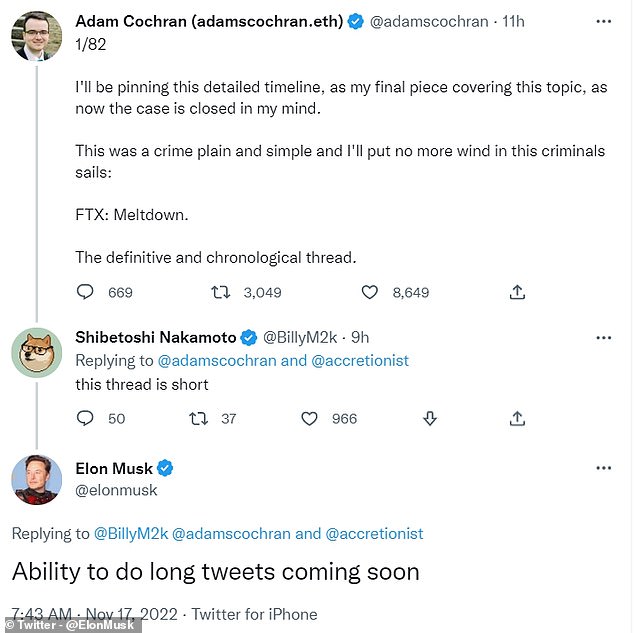 When Twitter first launched in 2006, tweets were capped at 140 characters, which was fairly restrictive.

But in 2018, Twitter doubled this limit to 280 characters to make it easier for users to ‘express themselves.’

Jane Manchun Wong posted a screenshot of what Twitter Articles was likely to look like, indicating that they could have their own dedicated section within the app.

Then in June, this feature appeared to evolve in ‘Twitter Notes’, which let users post blogs of up to 2,500 words, and was trialled by a few writers.

Notes allowed people post text, photos, videos, GIFs and embedded tweets in a single piece of content, and even edit it afterwards.

However, the tool did not make it out of the testing stage prior to Musk’s takeover earlier this month, who has since made a series of rapid changes at the company. 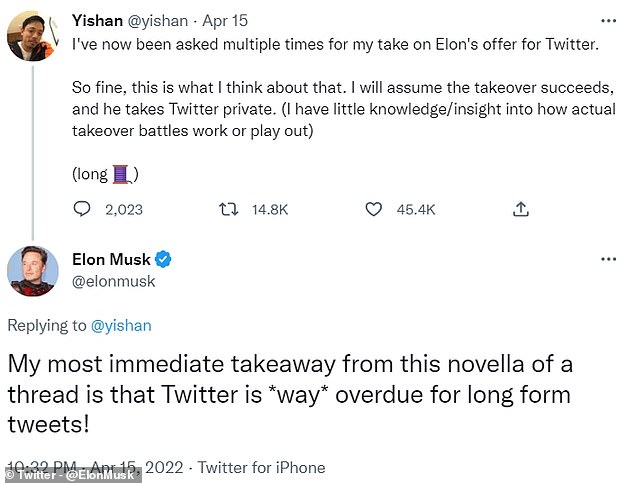 He first broached the subject of ditching Twitter’s character limit pre-takeover, in April, where he expressed that ‘Twitter is *way* overdue for long form tweets’ 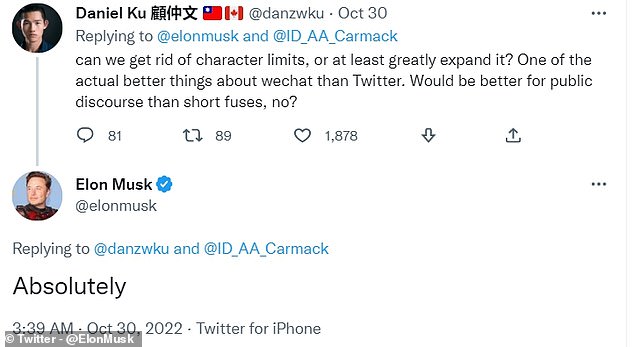 Then, at the end of last month, he replied ‘Absolutely’ to another Twitter user asking if he could ‘get rid of character limits’

The billionaire quickly fired Twitter’s previous CEO and other senior leaders and then laid off half its staff earlier this month.

He also made remarks about Twitter’s future leadership while defending his $56 billion (£47 billion) pay package at Tesla Inc in court yesterday.

‘I expect to reduce my time at Twitter and find somebody else to run Twitter over time,’ he said.

However Musk later said in a tweet that he will continue to run Twitter until it is in a strong place, though it will ‘take some time.’

In the court in Delaware, USA, he added that changes to a more ‘hardcore’ work environment at Twitter will be done by the end of next week.

On Wednesday morning, employees were told they need to sign a pledge to be able to stay on in their roles where they would be ‘working long hours at high intensity’, according to the Washington Post.

Staff received an email stating: ‘If you are sure that you want to be part of the new Twitter, please click yes on the link below.’

It linked to an online form, with Musk telling employees that if they did not sign by 5pm Eastern time on Thursday they would get three months of severance pay.

April 2: Musk announces that he owns 9.2 percent of the company, making him its largest single shareholder.

May 13: Musk says Twitter deal is on hold pending a review of bot accounts.

May 26: Musk is sued by Twitter for stock manipulation during takeover.

October 4: Musk proposes again to go ahead with the deal at the original price.

October 26: Musk visits Twitter HQ with a sink, updates his bio to ‘Chief Twit’ and sets his location to Twitter HQ.

October 27: Musk is officially made the new owner of Twitter, and tweets ‘the bird is freed’.

November 1: Musk confirms plans to change the system of ‘Blue Tick’ verification on Twitter, for a reduced subscription fee of $8 a month.

November 4: Musk lays off half of Twitter’s workforce as an alleged cost-cutting measure, claiming he had ‘no choice’.

November 11: The Twitter Blue service is paused due to accounts purchasing verification and using it to impersonate brands and public figures.

November 12: Musk fires 80 per cent of Twitter contractors without warning.

November 15: Musk fires employees that posted negatively about him on the business messaging app Slack. The lawsuit between Musk and Twitter is dismissed.

November 16:  Twitter staff are told they need to sign a pledge to be able to stay on in their roles where they would be ‘working long hours at high intensity’, or receive three months of severance pay.