A woman has shared the extensive quarantine routine she has been following to give herself a sense of ‘structure’ and ‘control’ amid the coronavirus pandemic, and while some people appreciated the motivation, others couldn’t resist mocking her jam-packed schedule by comparing it to their lazy days at home.

Last Tuesday, Twitter user @plntbasedcutie posted a comprehensive list detailing every thing she does while quarantined, starting with her waking up at 7 a.m. and ending with her going to bed at 10 p.m.

‘My Quarantine Routine!’ she tweeted. ‘This is just a general guide for myself based on my goals & what works for me! I’m allowing a lot flexibility with myself & not pressuring myself to complete everything. this is just to give me structure & a sense of control & stability.’ 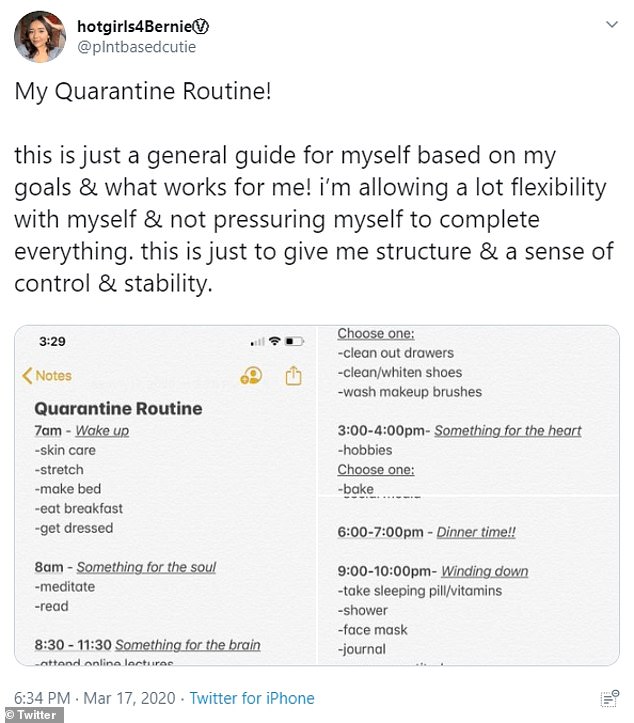 Making it work: She explained in her tweet that the detailed scheduled helps give her a sense of ‘structure’ and ‘control’ amid the coronavirus pandemic

The Twitter user organized the list hour by hour with different headings for each activity, beginning with ‘Wake Up’ at 7 a.m.

During this time, she does her skincare routine, makes her bed, eats breakfast, and gets dressed for the day.

An hour later, she meditates and reads for a half-hour, calling this time allotment ‘something for the soul.’

From 8:30 a.m. to 11:30 a.m., she does ‘something for the brain,’ which could be anything from attending an online lecture, doing school work, or even working on a puzzle to stimulate the mind. 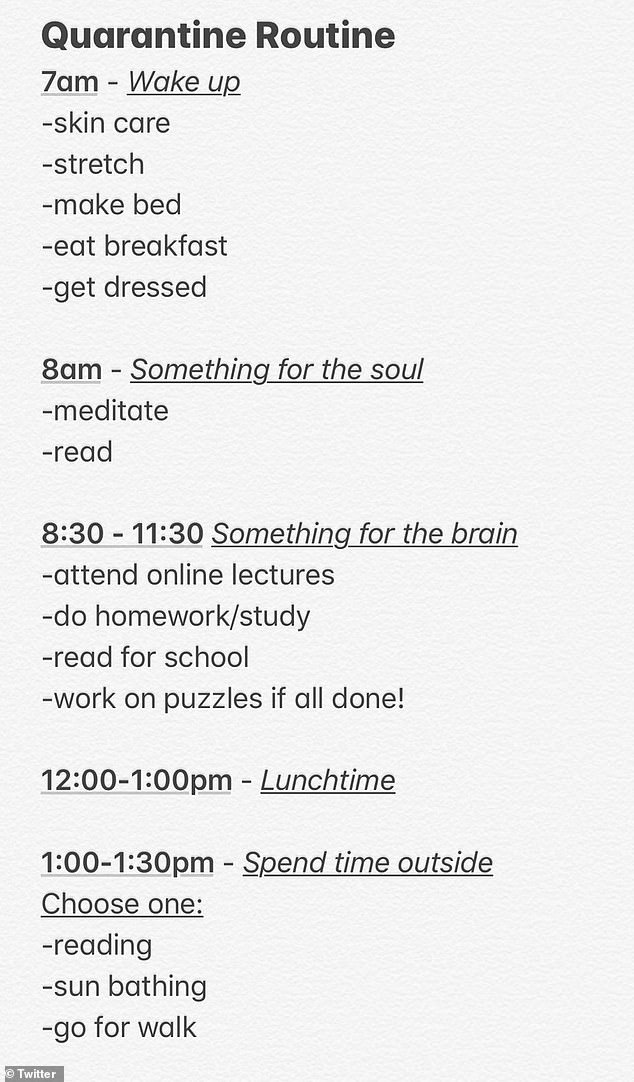 Play-by-play: The woman organized the list hour by hour with different headings for each activity, staring with ‘Wake up’ at 7 a.m. 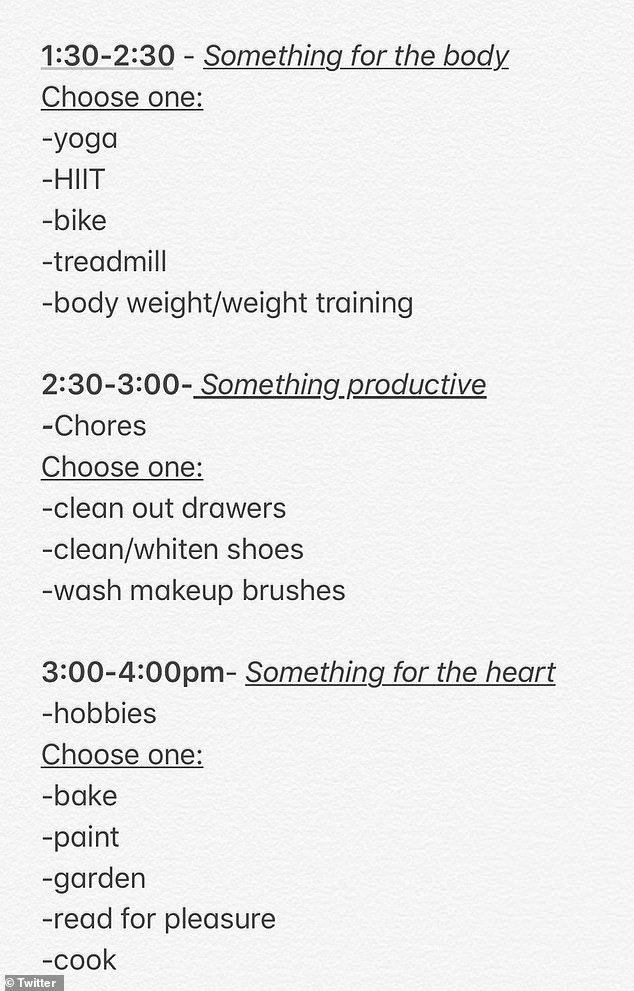 Time for everything: From 1:30 p.m. to 4 p.m., she works out, does something productive, and enjoys a hobby 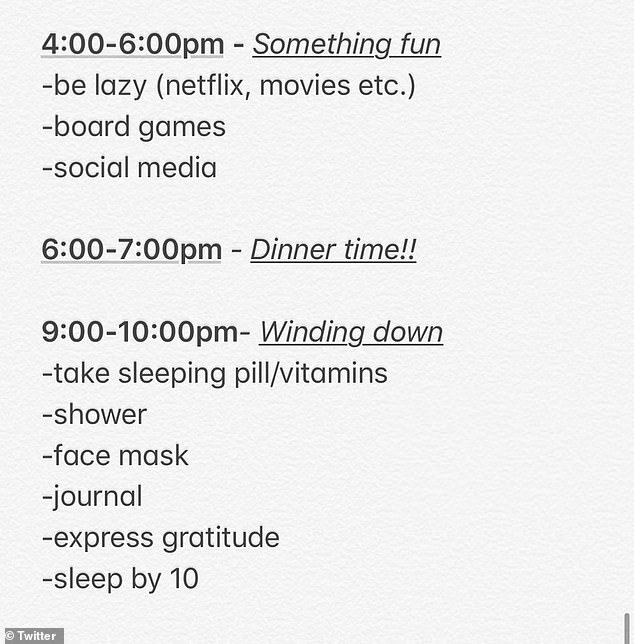 It’s all here: She even set apart time for hobbies and being lazy before going to bed at 10 p.m. on the dot

The woman sets aside an hour for herself to each lunch from 12 p.m. to 1 p.m., and she spends the following half-fhour outside, either reading, sunbathing, or going for a walk.

From 1:30 p.m. to 2:30 p.m., she does ‘something for the body,’ explaining that people can choose yoga, HIIT, riding a bike, a treadmill workout, or weight training.

After her workout, she likes to do ‘something productive’ for a half-hour, whether it be chores, cleaning out her drawers, cleaning her shoes, or washing her makeup brushes.

The Twitter user even set apart time for personal interests and being lazy. From 3 p.m. to 4 p.m. she recommends doing a hobby such as baking or painting followed by two hours of Netflix, board, games, and social media.

Inspired: Some people appreciated the motivation and said they were going to make their own scheduled to follow during these uncertain times

Before going to bed at 10 p.m. on the dot, she takes a sleeping pill and vitamins, showers, puts on a face mask, journals, and expresses gratitude.

The woman’s quarantine routine has been liked more than 530,000 times, and many commenters thanked her for the inspiration.

‘I love this! I tried to follow this today (with the only exception that I woke up around 11am),’ one person wrote, while another added: ‘Your tweet actually motivated me to get out of bed and make my own healthy routine.’ 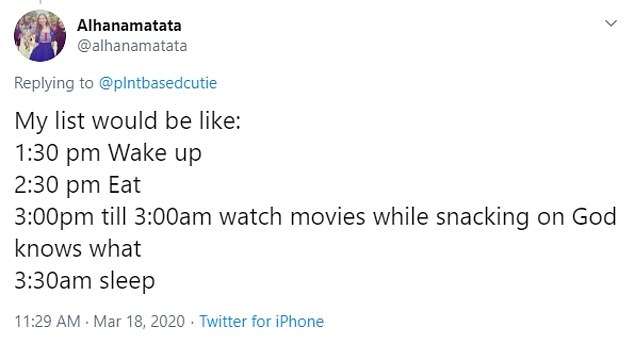 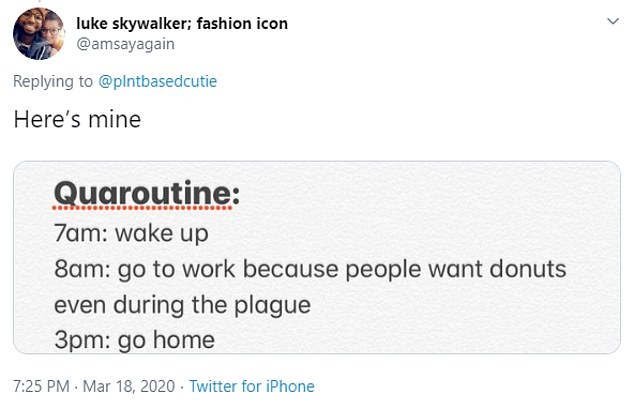 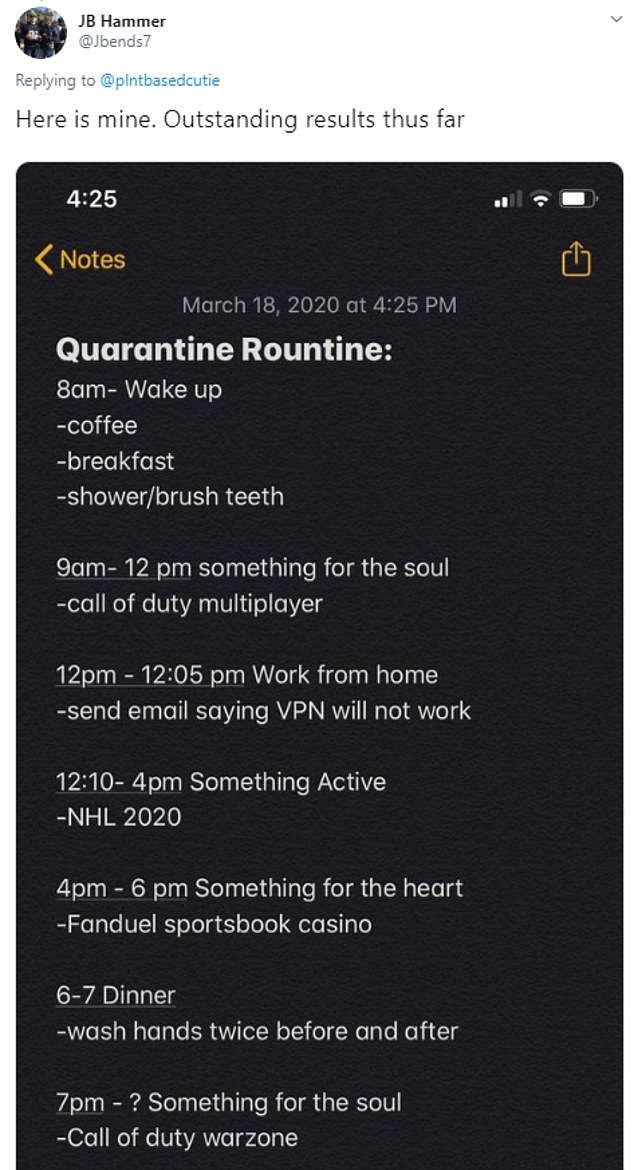 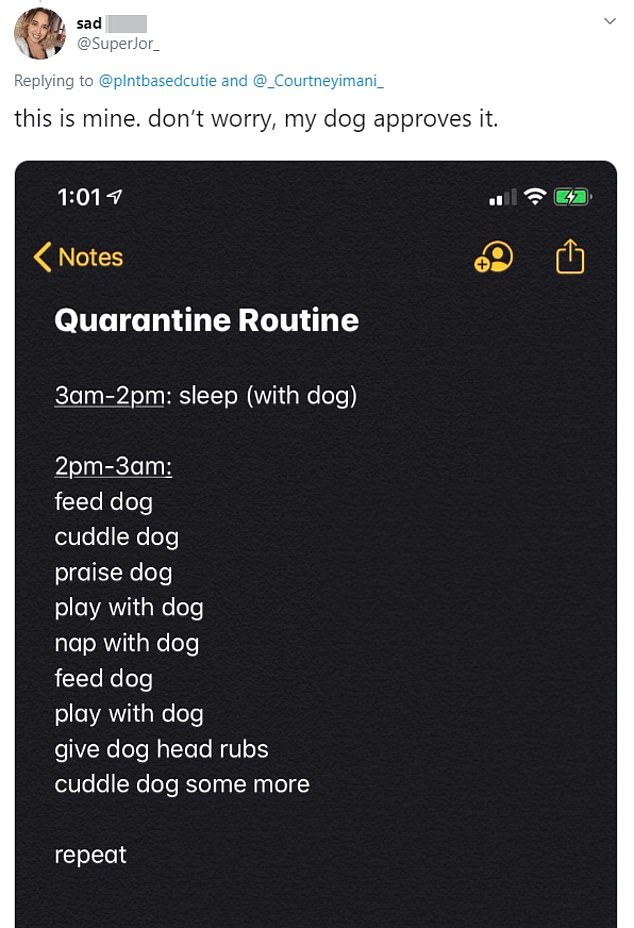 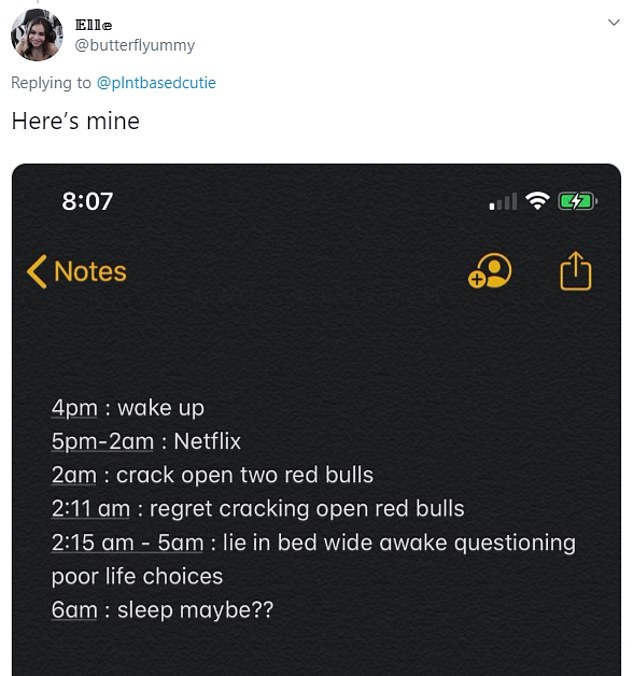 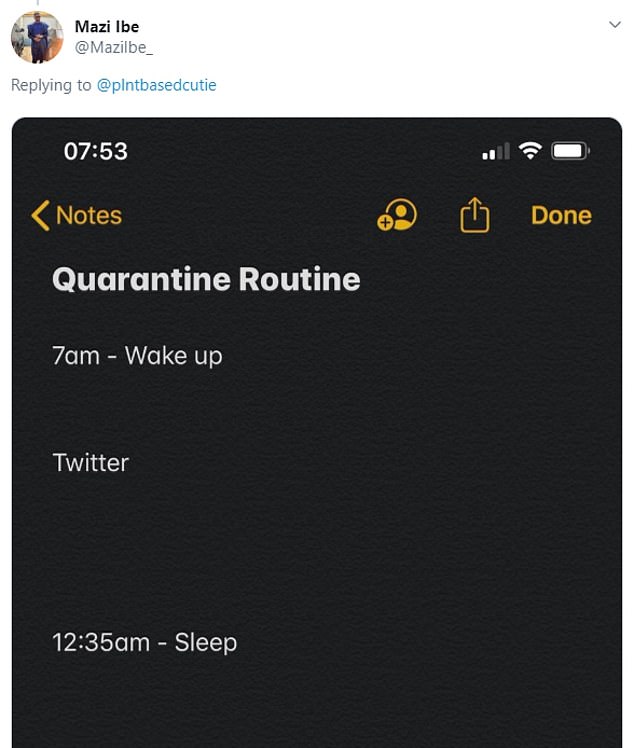 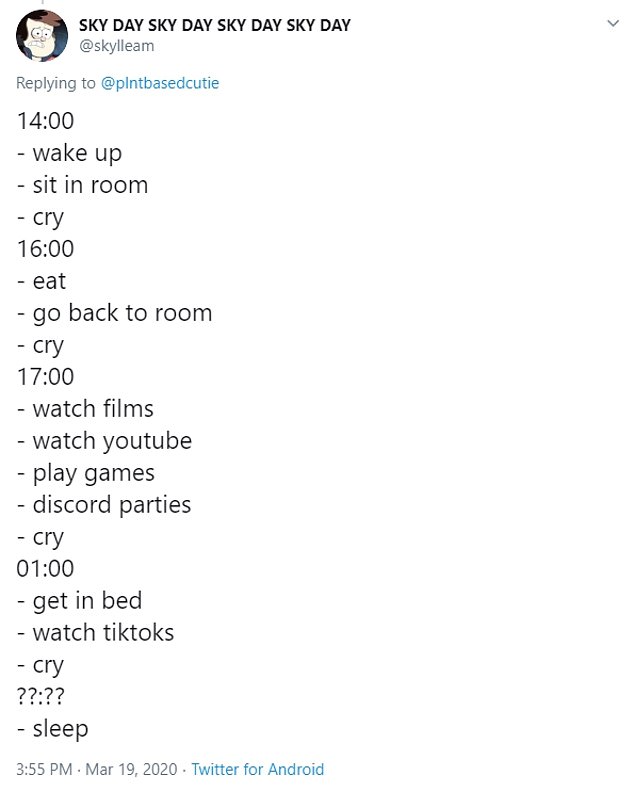 Not the same: Other people couldn’t resist poking fun of the woman’s schedule by comparing it to their own lazy days at home

‘I just know you’re a Virgo and I’m living for this routine right now,’ someone else gushed.

Others, however, took the opportunity to poke fun of the routine — and themselves — by sharing their daily schedules that consist of mostly sleeping, eating, and playing video games.

‘This is mine. Don’t worry, My dog approves it,’ someone else tweeted, sharing that she sleeps with her dog from 3 a.m. to 2 p.m. and spends all the time in between feeding, cuddling, and praising her beloved pet. 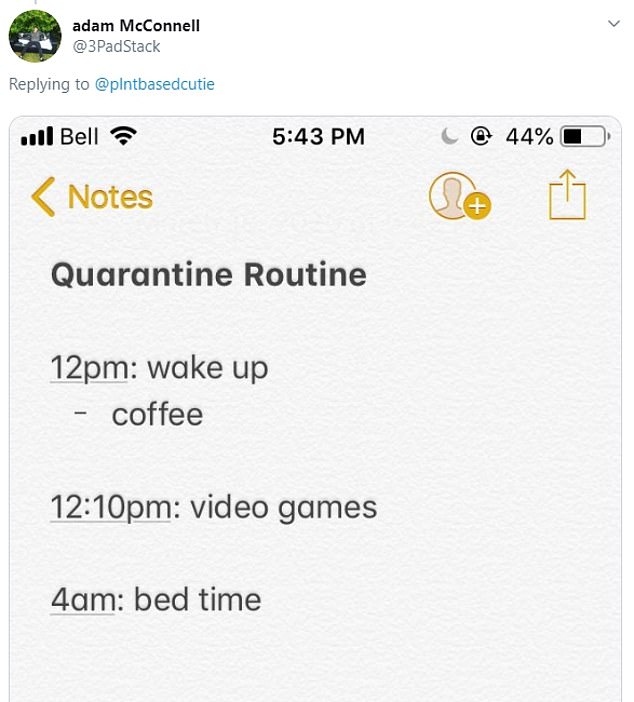 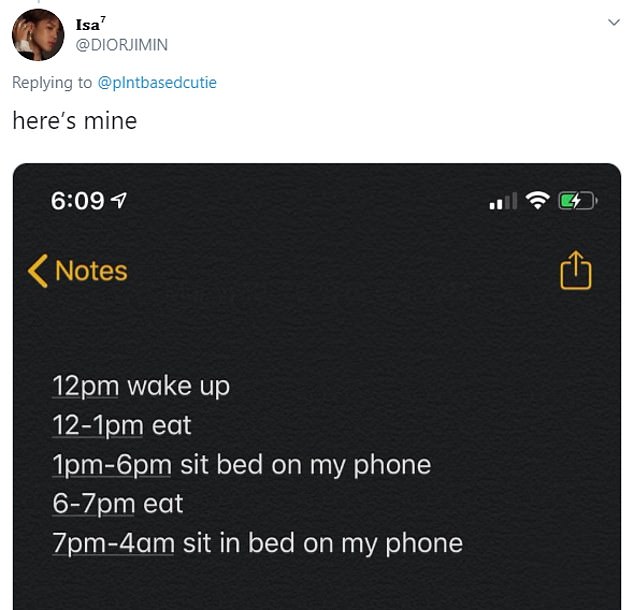 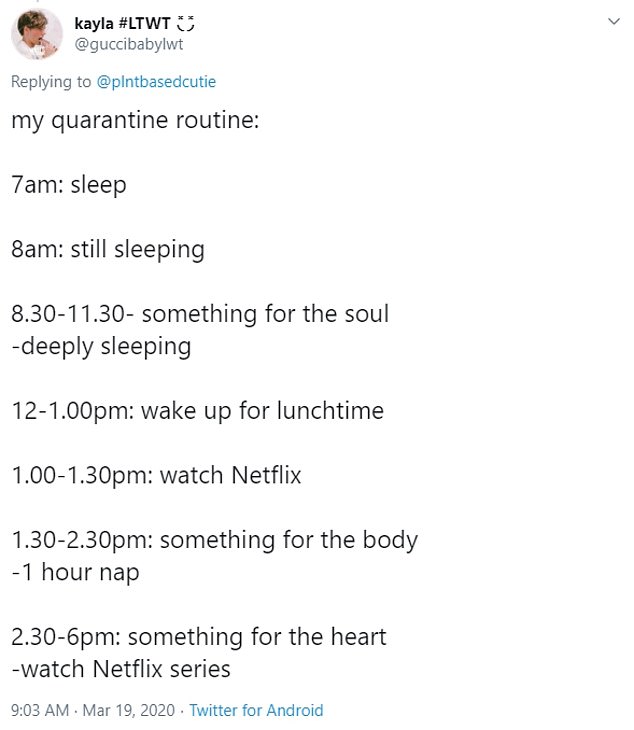 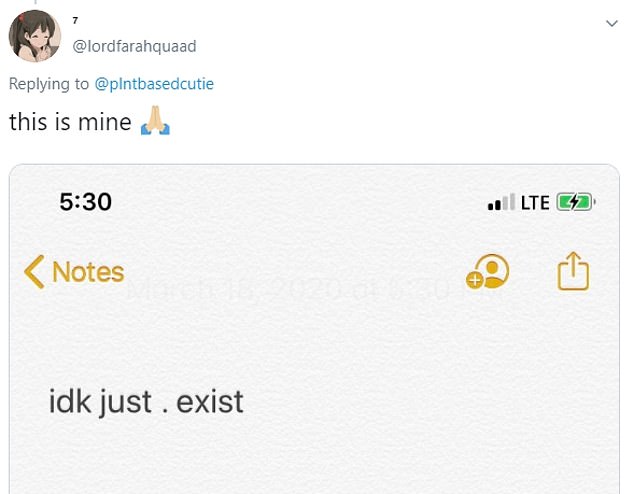 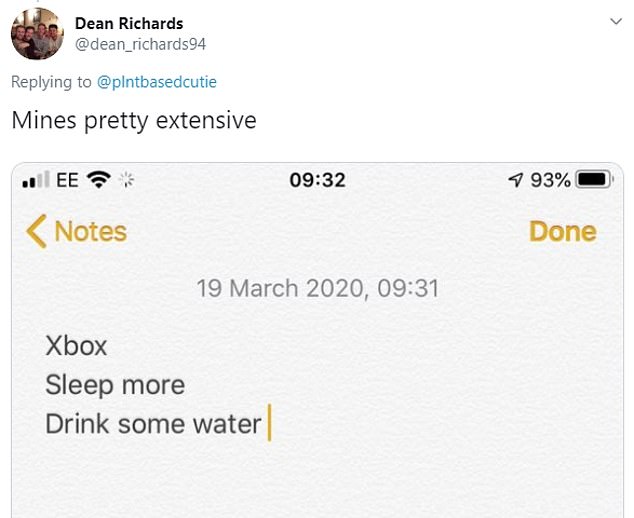 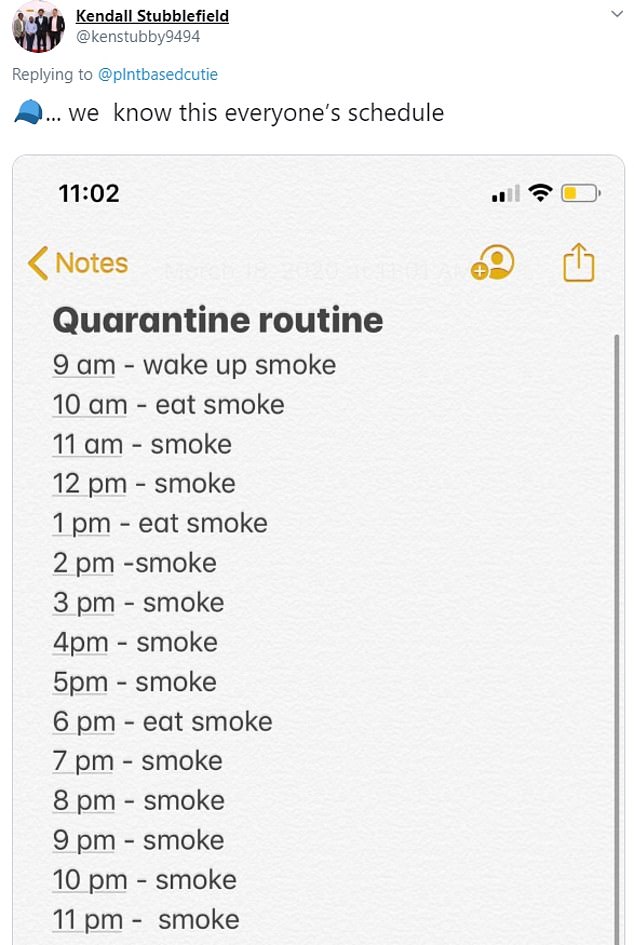 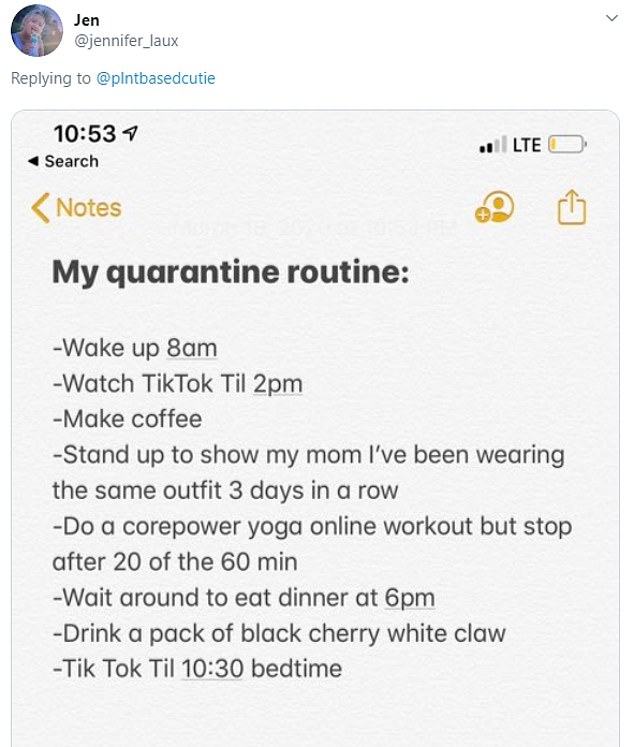 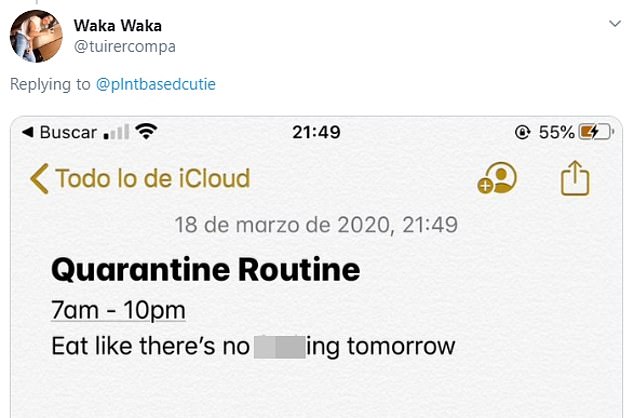 Time to kill: Many admitted that they spend most of their days eating, sleeping, binging TV, playing video games

Many commenters agreed that they have been spending their days in quarantine lounging around and doing the bare minimum to get by.

‘I just wake up at 10 am and make lunch and watch YouTube/Netflix and go on Twitter/Instagram/TikTok/Reddit all day. Then supper,’ another commented. ‘Stay up till 2am doing the same thing. ASMR. Fall asleep. And that’s on being self-isolated for 2 years already and despising schedules of any kind.’ 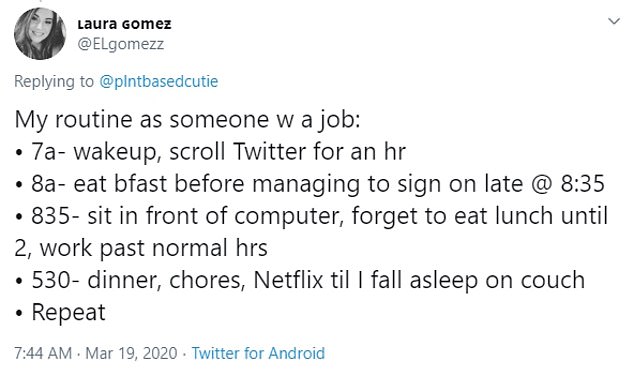 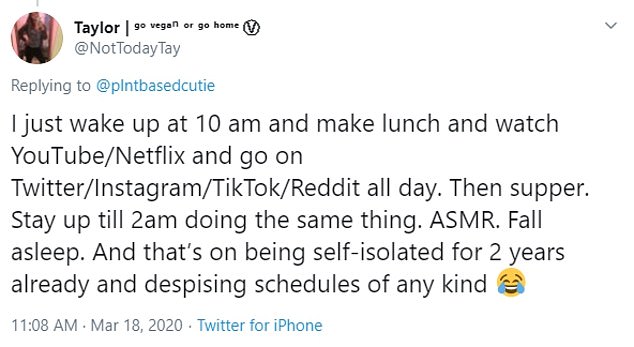 You do you: The woman who first posted her routine later returned to Twitter to assure people that they don’t have to have a schedule like hers

‘Cool, I’ve just kinda been eroding away,’ someone else responded.

The woman who first posted her routine later returned to Twitter to assure people that they don’t have to have a schedule like hers; they should be doing whatever they need to do to keep sane in these uncertain times.

‘Be kind to yourselves & remember that simply resting is enough!! We’re all doing our best & that looks different for everyone. Stay healthy,’ she wrote, adding: ‘A lot of people are saying that their mental health is too bad to do this & I totally get it.

‘I have major depressive disorder, I make/follow routines as a healthy coping mechanism. Keeping myself busy helps me from spiraling. It’s a process. Be easy on yourselves.’