Twitter has taken the number one spot in ‘US News’ on Apple’s App Store for the second time since Elon Musk’s $44 billion takeover in October.

Apple ranks apps based on user reviews and ratings, and as of Tuesday, Twitter has a 4.6 rating and several comments thank Musk ‘for restoring free speech.’

Twitter bounced between sixth and seventh when the $44 billion officially closed last year, but climbed to number one on November 9 and again on Monday.

Since Musk named himself Chief Twit, the lowest the platform has ranked was 11 – and it happened just days after the app sat at the top slot in November.

It is unclear what caused the recent climb for Twitter, but the move follows Musk’s release of the Twitter Files that could keep users on the hook for the latest news.

Elon Musk’s Twitter is ranked as the number one app for US News in Apple’s App Store. This is the second time Twitter has been at the top since Musk took over in October

Musk’s role as CEO has been a rollercoaster – industry experts have gone as far as to call it his ‘Twitter Circus.’

However, the billionaire acknowledged his faults in an interview last month with All-In Podcast.

‘My error rate in being the Chief Twit will be less over time, but in the beginning, we’ll obviously make a lot more mistakes because I’m new to… hey, I just got here, man,’ Musk said.

‘I think we’ll have fewer gaffes in the future,’ he added. ‘I think we’re actually executing well and getting things done.’

And the lasted rise of Twitter in the App Store suggests the app and Musk are heading in the right direction, first reported on by Teslarati.

On October 28, two days after the purchase of Twitter by Elon Musk was finalized, Twitter went from seventh to sixth in the App Store for the best US News apps.

And then it hit number one for the first time several weeks after that was immediately followed by the nose dive to eleventh.

Around the time Twitter sat at number one in November, Musk released an updated version of its iOS app that allowed users to pay a monthly fee for the coveted blue checkmark.

However, Musk pulled the feature just days after due to a flood of celebrity and company impersonators who wreaked havoc on the site – and the world.

Then on November 24, Musk said the relaunch of the monthly subscription would not roll out until the next month.

And this may have been the reason for Twitter’s nose dive to the eleventh spot, as the two occurred around the same time.

Musk has recently been pulling back the current on how Twitter was operating before his takeover, sharing a series of Twitter Files.

The Twitter Files began on December 2 after Musk promised to release the company’s internal dialogue regarding the suppression of the New York Post’s Hunter Biden laptop story.

Apple ranks apps based on user reviews and ratings, and as of Tuesday, Twitter has a 4.6 rating and several comments thank Musk ‘for restoring free speech’

The leaks have now gone beyond the Hunter Biden story to show how the company worked with the FBI to suppress free speech.

The files also show Twitter shadow-banned conservatives, despite claiming they did not, and how the FBI urged the former staff to delete pro-Trump tweets.

And on Monday, the latest dump of Twitter Files shows Pfizer board member and former FDA head Scott Gottlieb used his influence to pressure Twitter to flag a tweet that cast doubt on Covid-19 vaccines. 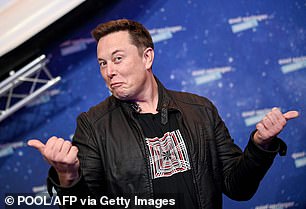 Musk’s role as CEO has been a rollercoaster – industry experts have gone as far as to call it his ‘Twitter Circus.’ However, the billionaire acknowledged his faults in an interview last month

The tweet – made by a former Government health official – was subsequently slapped with a ‘Misleading’ label, despite the debate around immunity still dividing scientists to this day.

While it is unclear if the latest dump of Twitter Files has anything to do with Twitter sitting at the top of the App Store, users appear to be excited to see it unravel on the social media platform.

Elon Musk teases release of bombshell Fauci Files in this week’s Twitter document dump amid his war with America’s top infectious disease expert: ‘One thing is for sure, it won’t be boring’