Is this the perfect ad for a Covid-19 Christmas? Hilarious Twitter thread imagines this year’s TV spot might look like – from a ‘Captain Tom Moore vs Joe Wicks mash-up’ to ‘kids singing on Zoom’

Each year, the John Lewis Christmas advert is eagerly awaited and brings a dose of feel-good festive cheer.

However, after months of working from home and socially distancing to prevent the spread of the coronavirus, and with new restrictions on the way, it is possible this year’s offering might be decidedly more austere.

After people chipped in with their own suggestions, the official Twitter account for John Lewis and Partners got in on the joke, saying they were taking notes.

Each year, the John Lewis Christmas advert is eagerly awaited and brings a dose of feel-good festive cheer (pictured, last year’s characters). But this year could be decidedly more austere

Jonathan started the thread, writing: ‘Dreading the John Lewis Christmas advert this year. Probably a cover of Fix You by a children’s choir, singing to all their nans via Zoom. Any other thoughts.’

Like Jonathan, many suggested the video conference system Zoom, which was popular throughout the strict lockdown put in place in March, should appear in the commercial.

Captain Tom Moore, who raised  £32,79 million for the NHS in the run up to his 100th birthday, was also named by some to be the hero of their imagined advert or making an appearance.

One person also mentioned Marcus Rashford’s campaign with Fareshare to raise £20 million to provide food for children that would have received free meals if still at school.

Scroll down for a selection of our favourites… 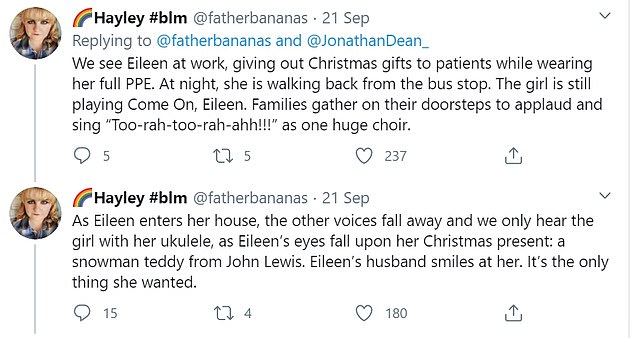 People were left in stitches after the official account for John Lewis and Partners chimed in, saying it was adding the suggestions to their ideas’ list