Billionaire Amazon founder Jeff Bezos has gone toe-to-toe with Leonardo DiCaprio, issuing a joking threat to the actor on Twitter after his girlfriend Lauren Sanchez was caught ‘thirsting’ over him while attending a gala event on Saturday night.

Video from the 10th Annual Los Angeles County Museum of Art (LACMA) Art and Film Gala shows Sanchez, 51, visibly swooning over DiCaprio, 46, while seemingly ignoring her partner Bezos, 57, who was standing right beside her as she gazed adoringly at the star.

In response to the clip, Bezos attempted to go mano-e-mano with DiCaprio, calling him out on Twitter, while jokingly threatening to push the actor off a cliff.

‘Leo, come over here, I want to show you something… @LeoDiCaprio,’ the businessman wrote alongside an image of himself posing next to a sign that reads: ‘Danger! Steep cliff, fatal drop.’ 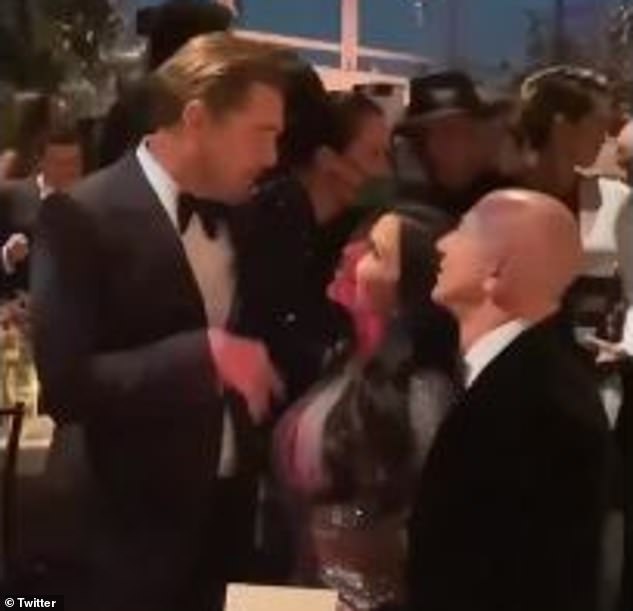 DiCaprio, 46, seemed to make quite the impression on Sanchez, 51, who was visibly besotted with him, despite standing next to Bezos, 57 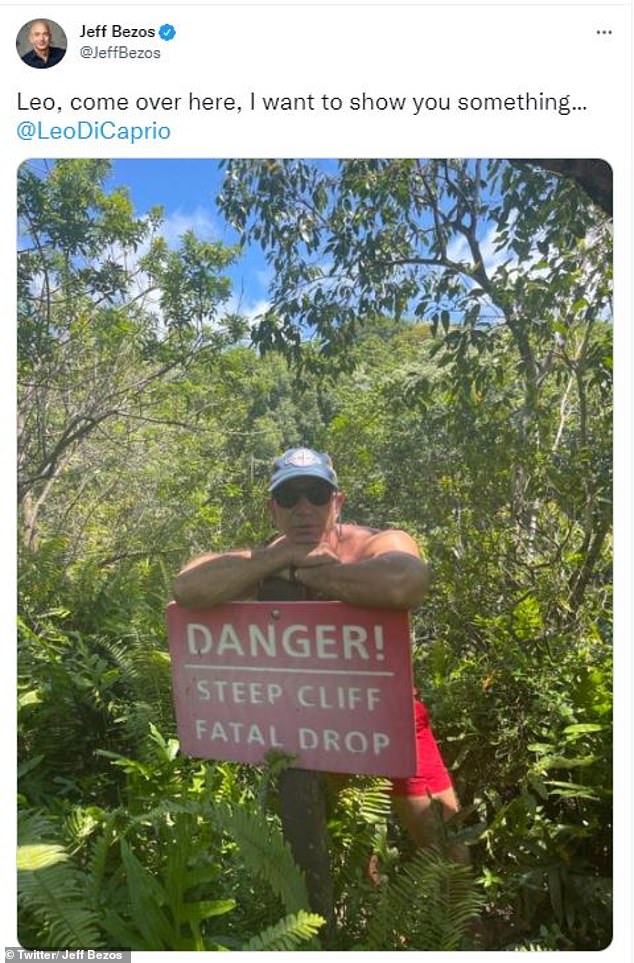 Bezos’ macho Twitter post was shared not long after user @2cooI2blog posted footage Sanchez cozying up to the Once Upon A Time in Hollywood star on Sunday, the day after the gala.

The video, which has been viewed more than 10.2 million times, shows a smiling Sanchez leaning in towards DiCaprio as she gazes up at him while they chat.

Although the details of their brief conversation cannot be heard over the background noise in the room, she is seen grinning in response to something the actor said, while he gestures with his hands, before turning to walk away.

The news anchor was dressed to the nines in a long-sleeve silver gown that featured cutouts at her waist and a thigh-high slit that revealed her platform heels.

Bezos was standing next to her the entire time, but people felt there was a full-on flirtation — at least on Sanchez’s end.

‘Sis walked in with the richest man on the planet and risked it all when she got next to Leonardo,’ one person wrote. 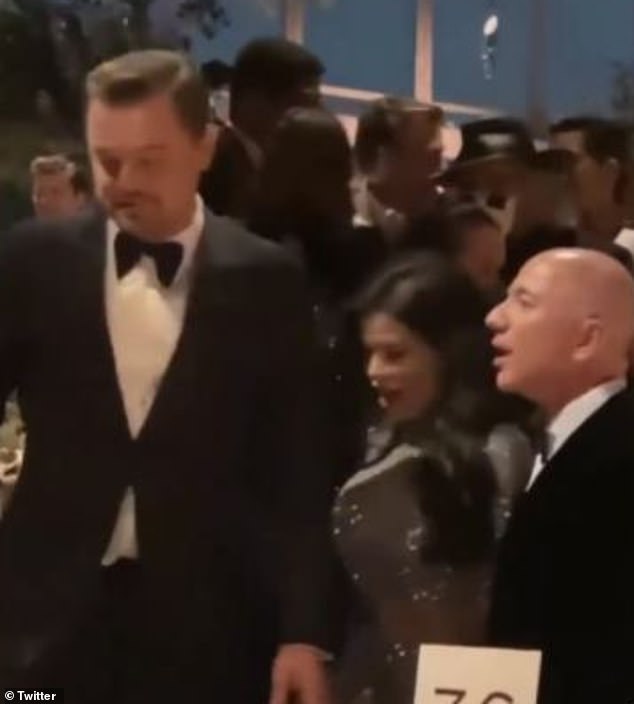 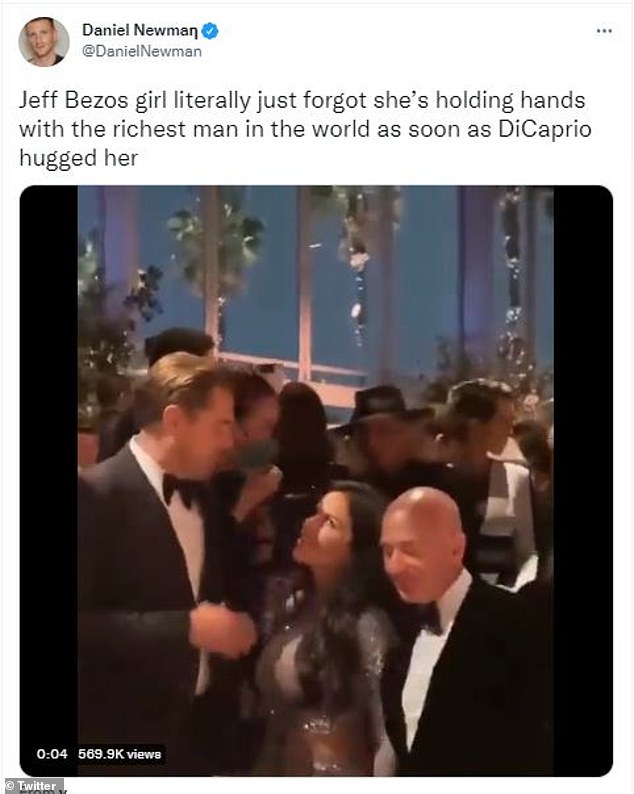 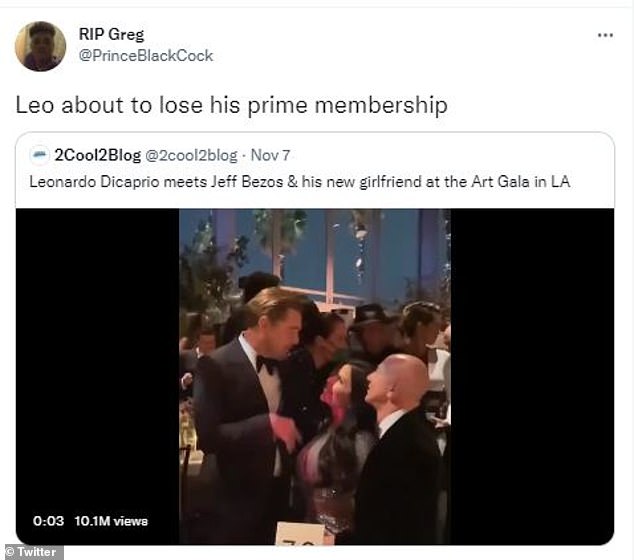 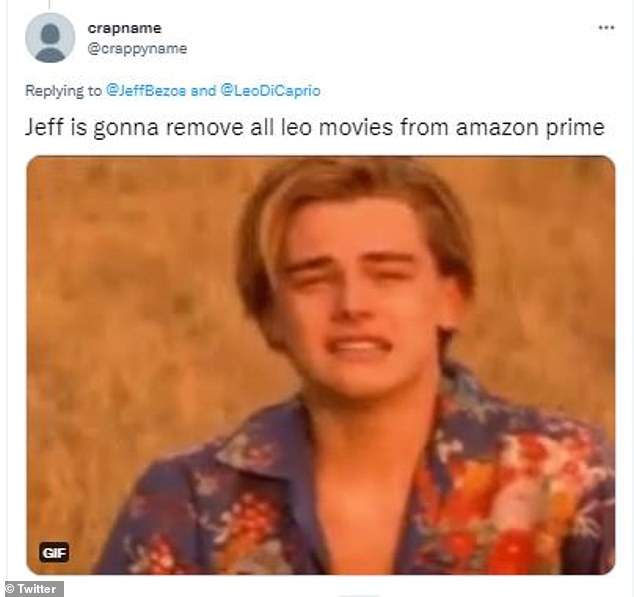 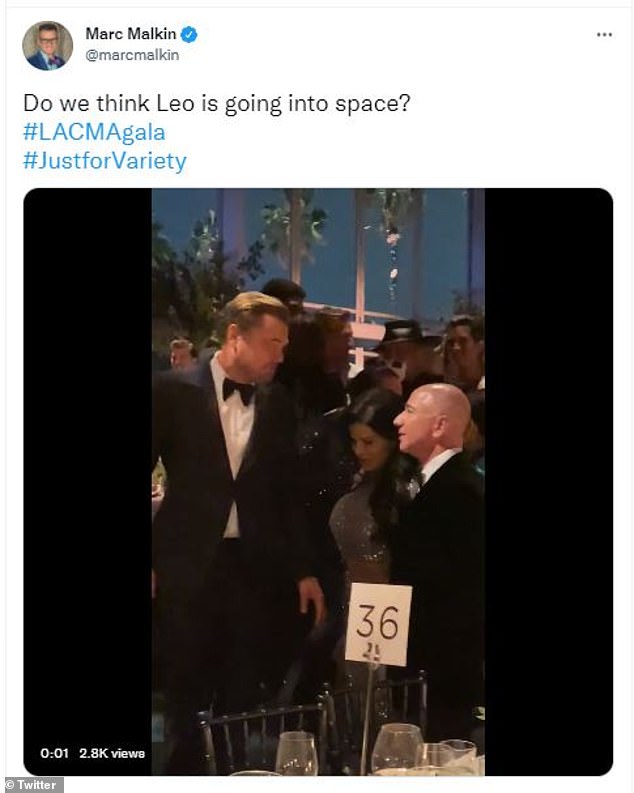 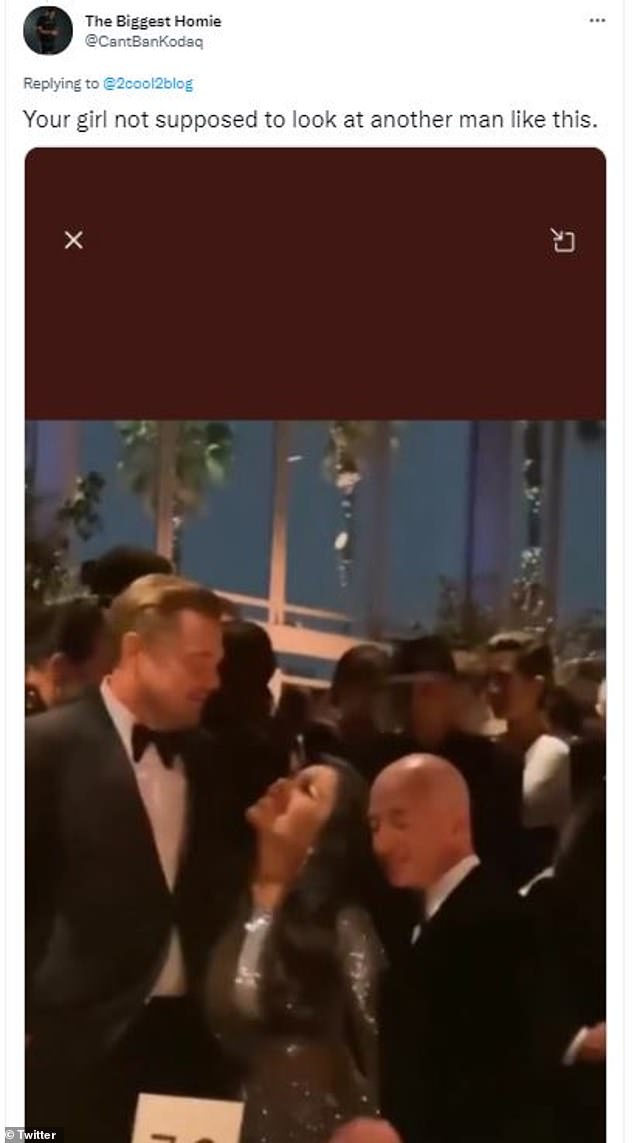 ‘Jeff Bezos girl literally just forgot she’s holding hands with the richest man in the world as soon as DiCaprio hugged her,’ another person added.

Someone else tweeted: ‘Find you someone who looks at you the way Jeff Bezos’ girlfriend looks at Leo DiCaprio.’

Others couldn’t resist pointing out how Sanchez stared at DiCaprio’s backside as he walked away from them while sharing screenshots of the moment.

‘How she checks him out as he leaves,’ one Twitter user wrote, while another added: ‘That face while checkin out Leo’s backside…’

‘He knows it’s over,’ someone else captioned a snapshot of Bezos’ face during the awkward exchange between his girlfriend and the Titanic hunk.

A few people were also concerned that DiCaprio was about to find himself in the billionaire’s bad graces, which could affect him in a number of ways. 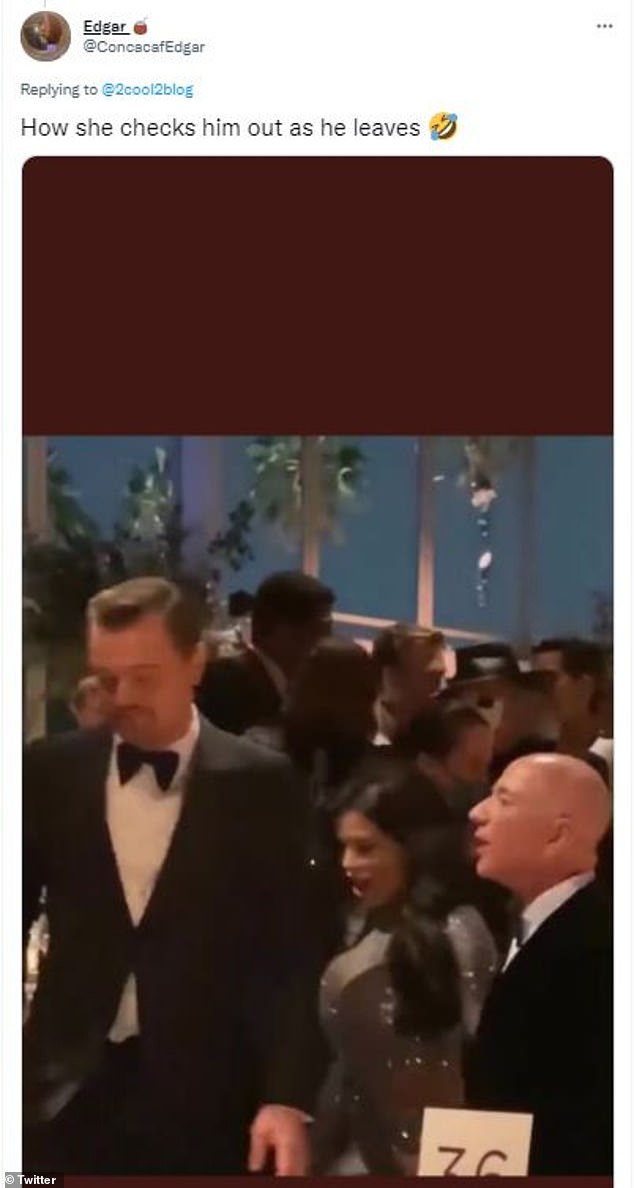 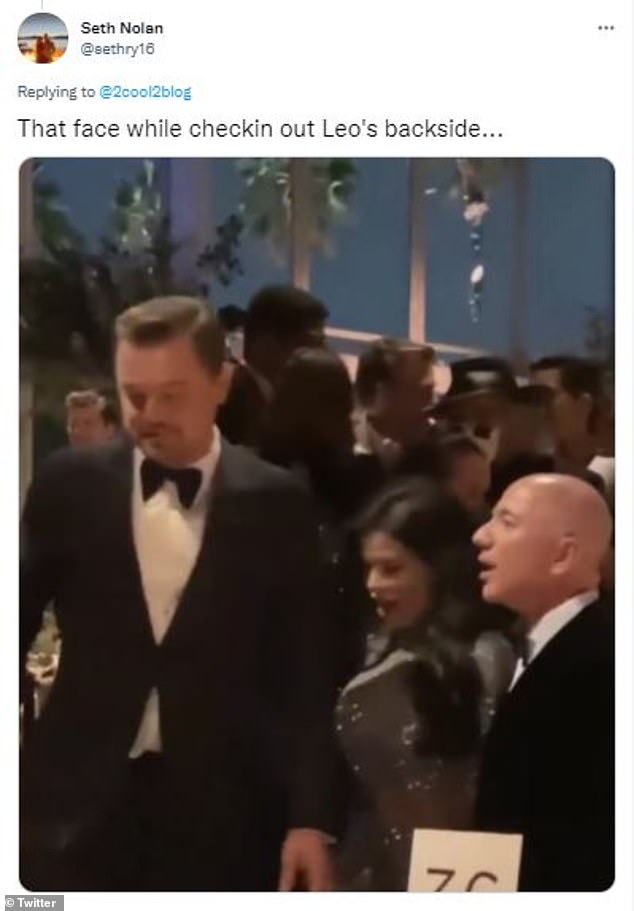 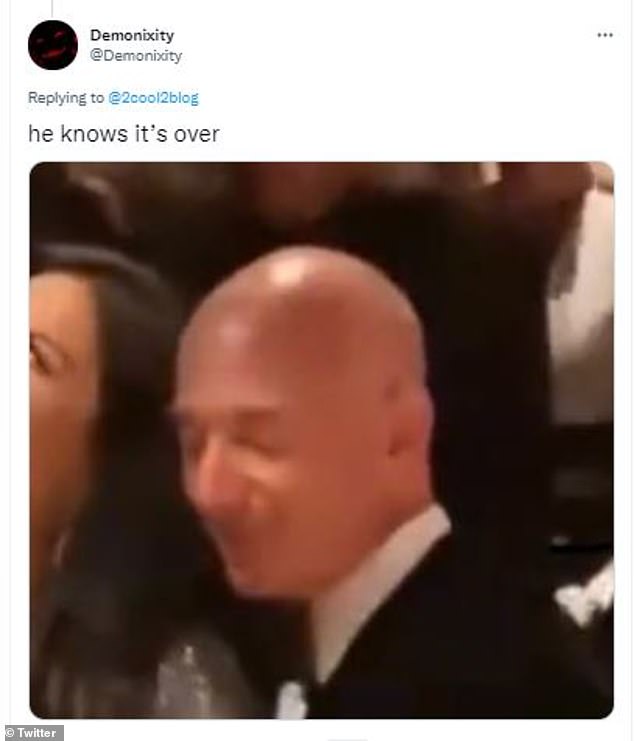 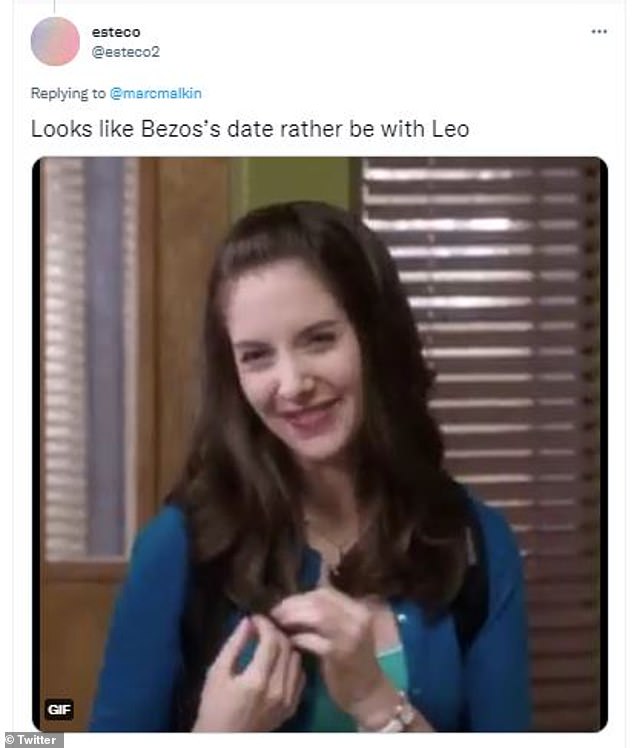 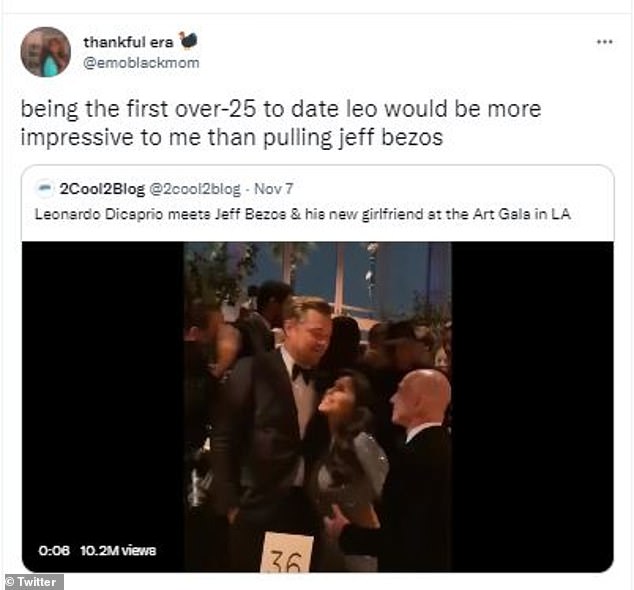 ‘Leo about to lose his Prime membership,’ one viewer joked, while another commented: ‘Jeff is gonna remove all Leo movies from Amazon Prime.’

Bezos has been in a relationship with Sanchez for nearly three years now. Their romance was publicly revealed in January 2019, just hours after he announced that he was divorcing his then-wife of 25 years, Mackenzie Scott.

DiCaprio’s girlfriend of four years, model Camila Morrone, 24, was also at the event, though they didn’t walk the red carpet together.

The handsome actor is known for dating young models, and some speculated that it would be harder for Sanchez to land DiCaprio than one of the richest men in the world.

‘Being the first over-25 to date Leo would be more impressive to me than pulling Jeff Bezos,’ one person explained.

Sanchez has yet to comment on the viral video, but she did take to Instagram to share photos from the gala, including one of herself giving her beau a loving look.

Another shows them posing with Salma Hayek and her husband husband François-Henri Pinault, the CEO of Kering, the company that owns Gucci. 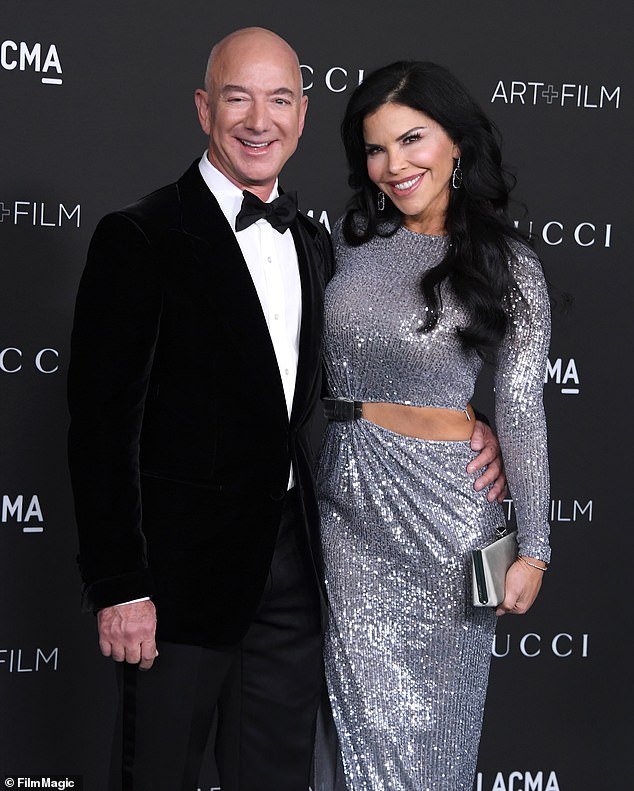 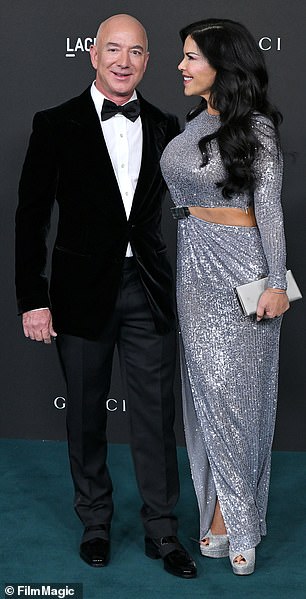 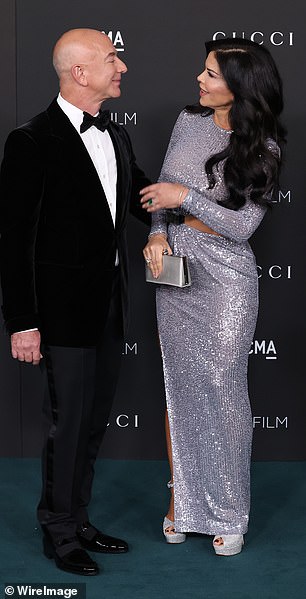 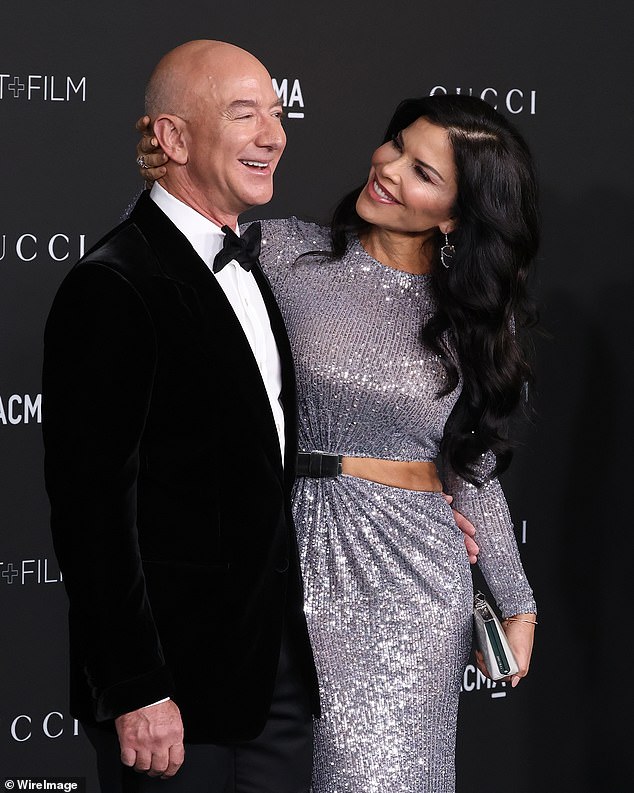 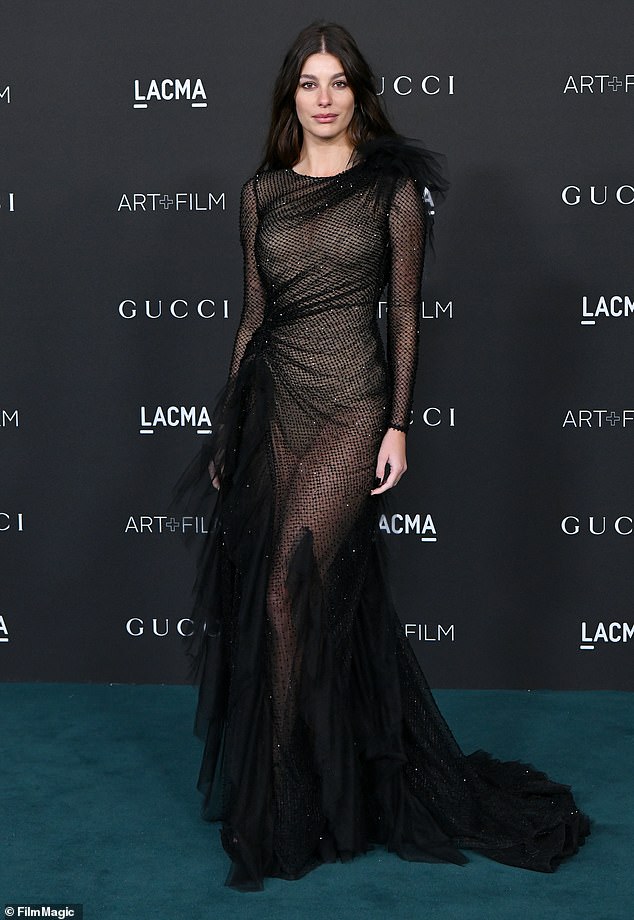 DiCaprio’s girlfriend of four years, model Camila Morrone, 24, was also at the event, though they didn’t walk the red carpet together 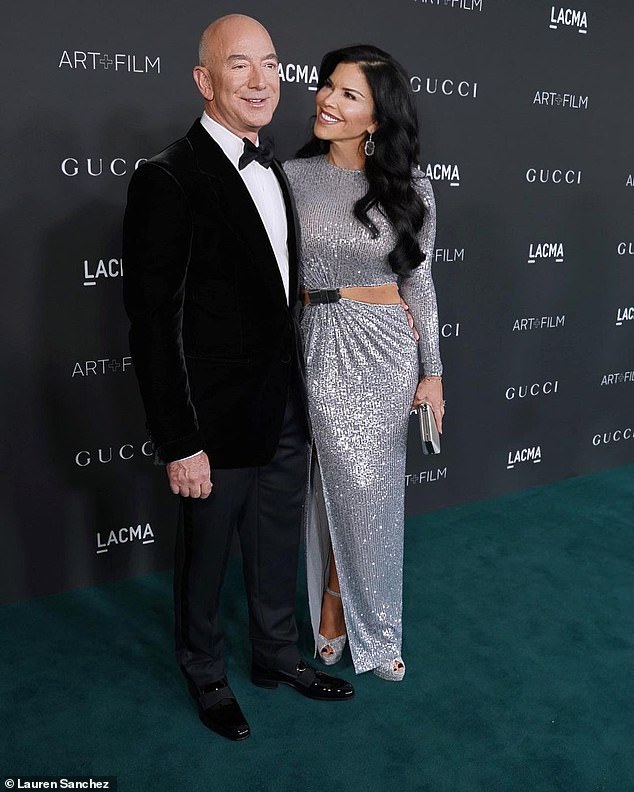 Sanchez has yet to comment on the viral video, but she did take to Instagram to share photos from the gala, including one of herself giving her beau a loving look 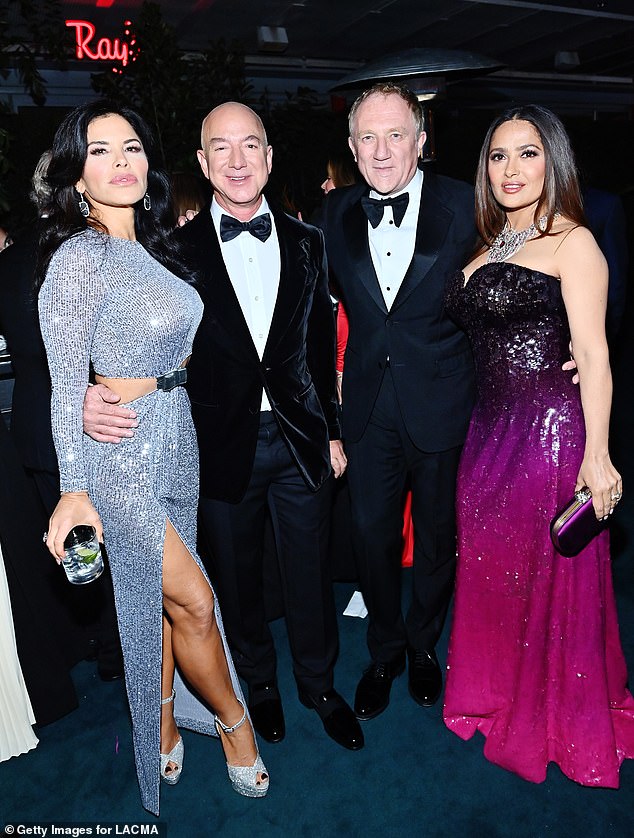 Another shows them posing with Salma Hayek and her husband husband François-Henri Pinault, the CEO of Kering, the company that owns Gucc 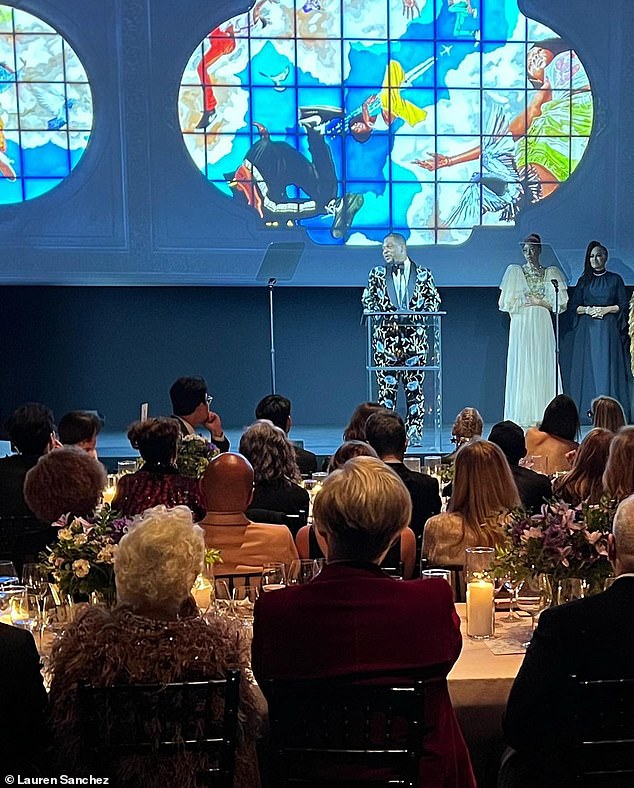 While DiCaprio didn’t make the cut in her post, she did mention him as one of the event’s co-chairs in her gushing caption.

‘Beautiful evening last night at the @LACMA Art + Film Gala hosted by the amazing @1evachow and @leonardodicaprio,’ she wrote. ‘A huge congratulations to this year’s honorees @asherald, @kehindewiley and Steve Spielberg!

‘An amazing event that will benefit important museum initiatives, exhibitions, and programming for years to come.’

Although DiCaprio has yet to respond to Bezos’ threatening tweet, the actor has called out the Amazon founder on Twitter in the past.

In August 2020, the Titanic star called for the Amazon founder to ‘make Election Day a day off’ for all company employees, while retweeting a post shared by comedian Sarah Silverman.

The original tweet mentioned Bezos along with several other big-name businesses, including Walmart and Pepsi, and read: ‘HEY BIG BUSINESSES, who’s gonna step up and make Election Day a day off instead of a classist farce? WHO’S IN?? @JeffBezos @Walmart @amazon @PepsiCo @CocaCola @McDonalds.’