The lawsuit filed on Tuesday in Delaware cites Musk’s May 16 tweet, among others, as evidence that he publicly disparaged Twitter, in violation of the merger agreement, before he backed out of the deal entirely.

Musk’s tweet with the smiling poop emoji came in response to Twitter CEO Parag Agrawal, who had sent several tweets explaining the company’s procedures to combat spam and fake accounts, a battle Agrawal described as ‘dynamic.’

Last week, Musk said he was terminating the buyout deal over concerns about bots and fake accounts, and he responded to the lawsuit with a tweet explaining that his use of the colorful emoji was shorthand for ‘BS’, a common abbreviation for ‘bulls**t.’

Now Twitter is seeking a court judgement to force Musk to buy the company at $54.20 per share, as he agreed in the April 25 merger deal — and many legal and financial experts believe the social media platform has a strong case.

Twitter’s lawsuit includes a screenshot of the billionaire responding to its CEO with the poop emoji, saying it’s evidence he disparaged the company in violation of the buyout deal 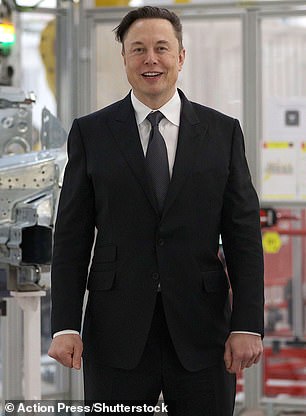 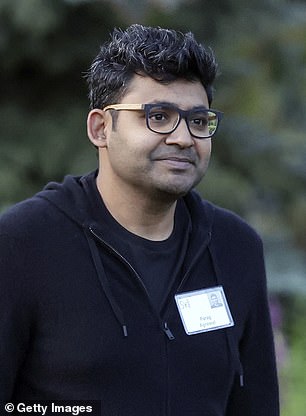 Twitter’s lawsuit cites numerous tweets from Musk as evidence that he violated the merger agreement by disparaging the company and revealing non-public information.

In one May 17 tweet, Musk appeared to encourage the SEC to investigate the accuracy of Twitter’s public disclosures.

The company argues that these tweets violate the merger agreement, which states in part that Musk is allowed to tweet about the buyout ‘so long as such Tweets do not disparage the Company or any of its Representatives.’

While Musk’s tweets are presented as evidence he has been pursuing the takeover in ‘bad faith’ — but the crux of Twitter’s argument is that the world’s richest man is bound by the deal to buy the company he signed on April 25.

The suit notes the deal includes no contingency requiring Musk to secure financing, and that the billionaire waived the customary right to due diligence, which refers to the type of investigation into business fundamentals that he later pursued regarding fake accounts.

Twitter stock jumped nearly 8 percent on Wednesday, to $36.75, in a sign that investors view the company’s lawsuit as likely to succeed in some capacity. 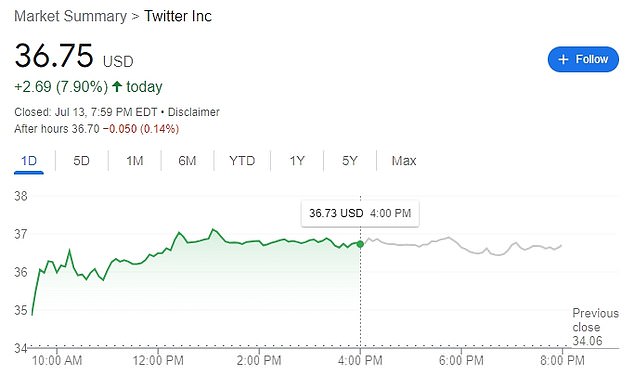 Twitter stock jumped nearly 8 percent on Wednesday, to $36.75, in a sign that investors view the company’s lawsuit as likely to succeed in some capacity 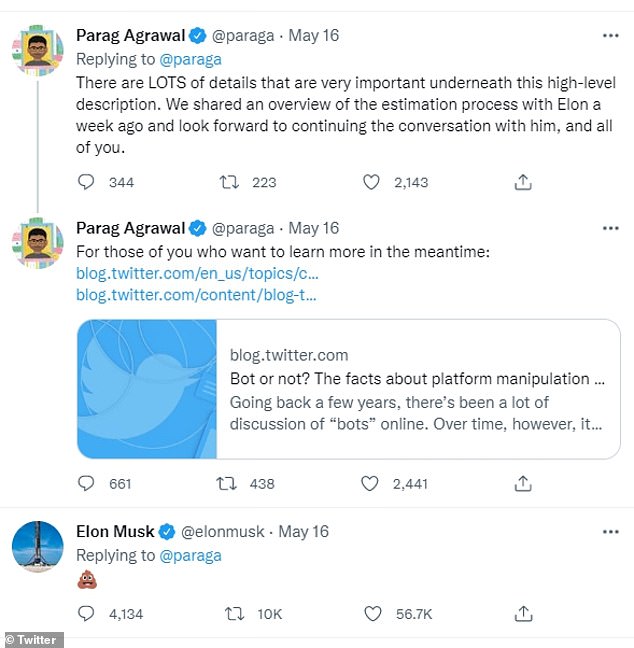 Wedbush analyst Dan Ives wrote in a note obtained by DailyMail.com that ‘many investors spent last night reading the case and ultimately concluded that this Game of Thrones battle in court will result in some version of a Twitter win.’

‘This will be a fierce battle in court with the fake account/bot issue front and center, but ultimately Twitter’s Board is holding Musk’s feet to the fire to finish the deal at the agreed upon price,’ wrote Ives.

The lawsuit ultimately states that Musk ‘refuses to honor his obligations to Twitter and its stockholders because the deal he signed no longer serves his personal interests’.

Twitter’s lawyers said the company was given little time to comply with Musk’s demands for information on fake accounts, and argued that they suspected he was trying to use the data to form a competitor.

‘Steadfast in its commitment to consummate the merger, Twitter continued to try to get Musk’s team what it demanded while safeguarding its customers’ data and harboring very real concerns about how Musk might use the data if he succeeded in escaping the deal,’ the lawsuit stated.

Twitter’s lawyers argued that if the company continued to bow to Musk’s demands, it would ‘expose Twitter to competitive harm.’ 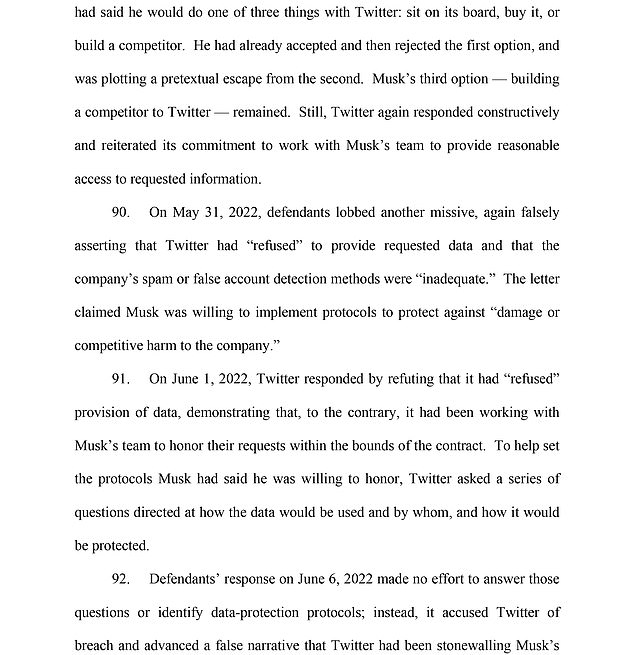 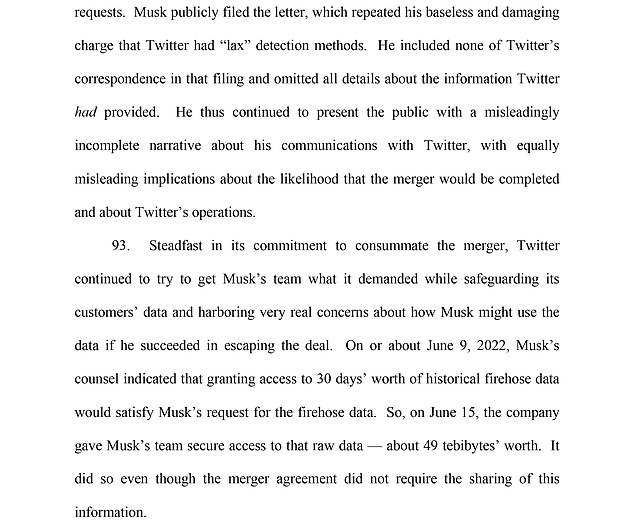 They added that despite saying he would back away from the deal, Musk has allegedly continued to mine Twitter’s confidential data.

‘Twitter has bent over backwards to provide Musk the information he has requested, including, most notably, the full ‘firehose’ data set that he has been mining for weeks — and has been continuing to mine since purporting to terminate — with the assistance of undisclosed data reviewers,’ the lawsuit stated.

It contains a reference to a number of tweets about the deal from Musk, including the poo emoji he sent in reply to a tweet from the platform’s chief executive about fake account numbers.

‘Twitter describes Elon Musk as a hypocrite who has trashed the company and caused “irreparable damage,”‘ Navarra told the PA news agency.

‘Yet Twitter wants a judge to force Elon Musk to pay up and complete the 44 billion dollar takeover deal he started. This could end up being the world’s most expensive case of “If you break it, you pay for it.”‘

Kathaleen McCormick took over the role of chancellor, or chief judge, last year after the retirement of Andre Bouchard on the Court of Chancery, a favored venue for large corporate disputes.

Among McCormick’s first decisions will be a request by Twitter to hold a four-day trial in September, an incredibly tight time frame for such a complicated case.

McCormick’s final ruling on the merger can be appealed to the Delaware Supreme Court.