‘Baby number….?’ Twitter celebrates the birth of Boris Johnson and Carrie Symonds’ baby with comedy memes – joking the PM’s ‘only been back for two days and can now take paternity leave’

If the news that Boris Johnson and Carrie Symonds have welcomed a baby boy into the world this morning took a nation in lockdown by surprise, it wasn’t long before social media clicked into gear and conjured up a thousand memes on the happy news.

The news, announced just before 10am this morning, quickly sent the hashtag #borisbaby soaring to the top of Twitter’s trending column.

While many posted memes showing the PM, 55, and his girlfriend whooping with delight, and saying the news gave the nation a much-needed moment of joy, others couldn’t resist referencing Mr Johnson’s expanding brood – with a mischievous Wikipedia editor changing the reference to how many children the PM has to an uncertain ‘6 or 7’. 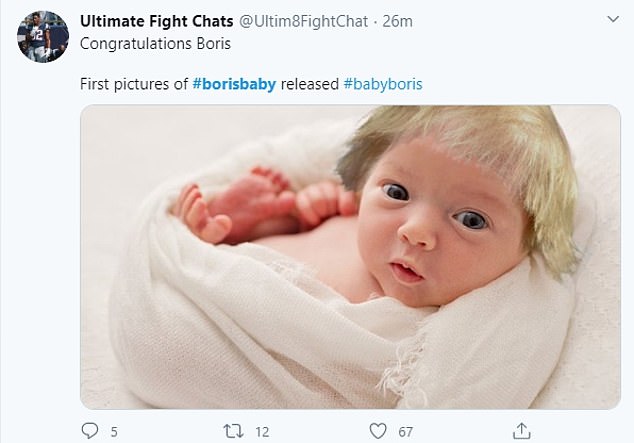 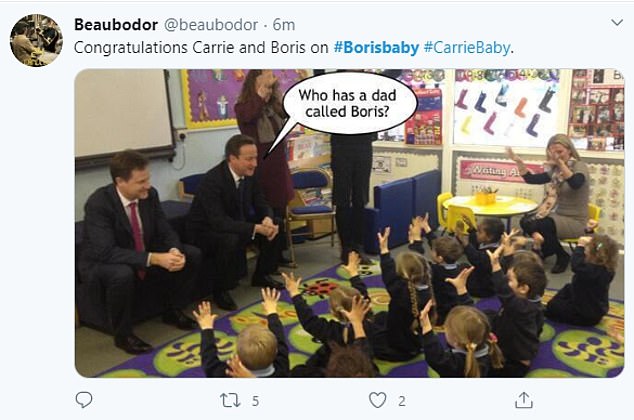 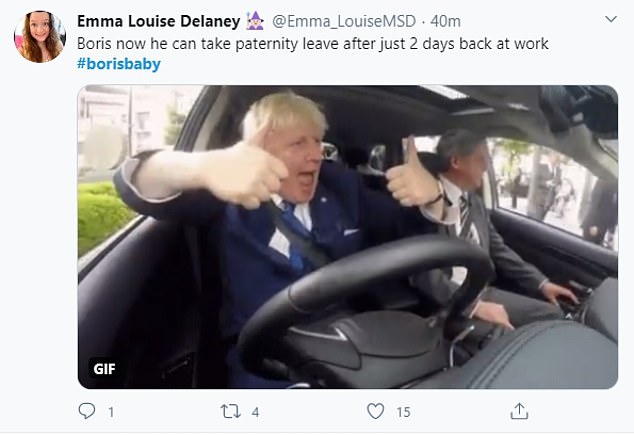 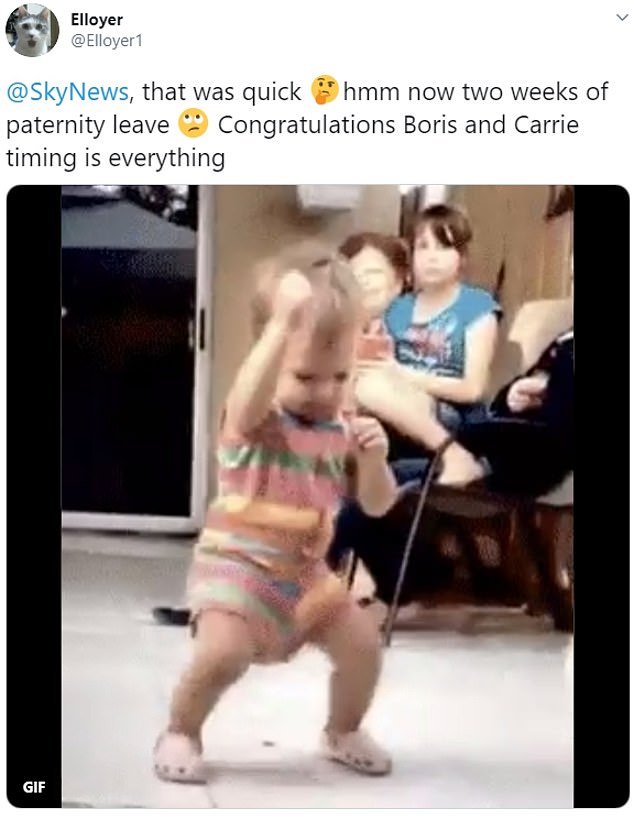 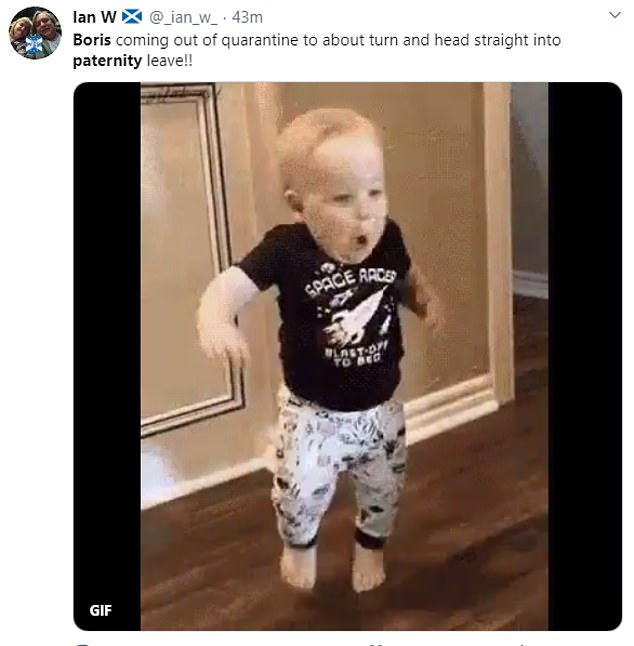 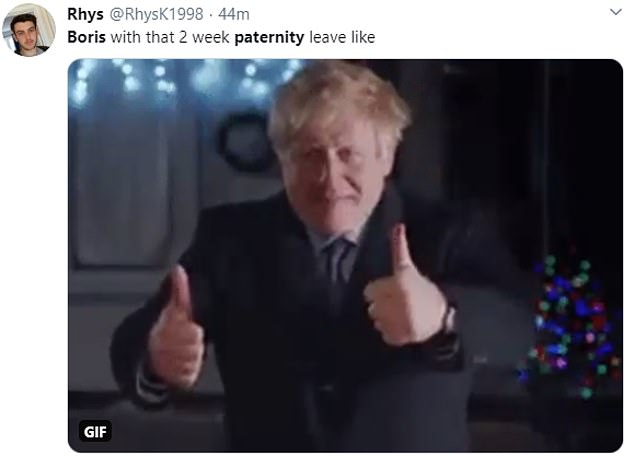 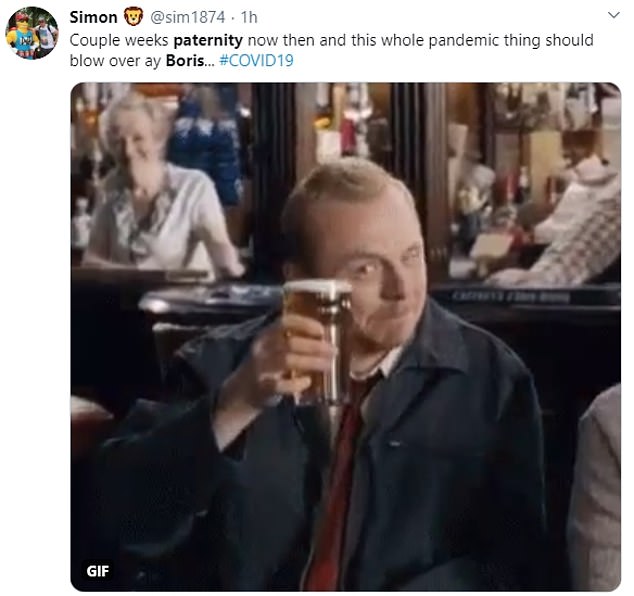 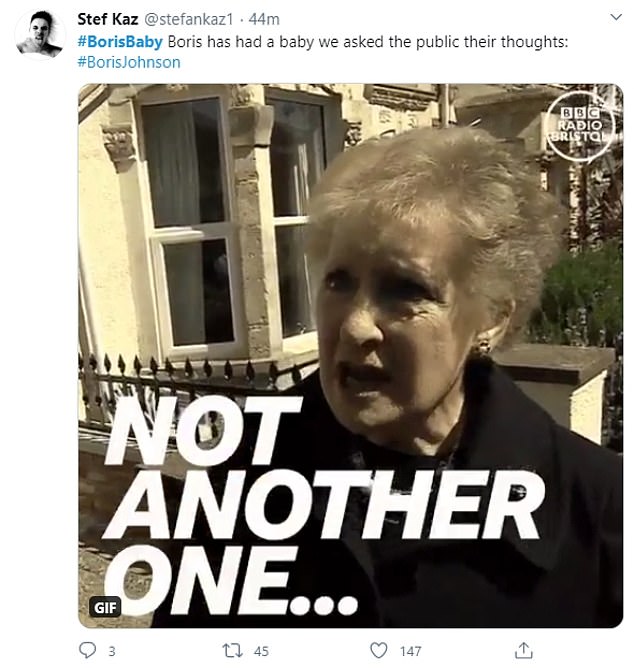 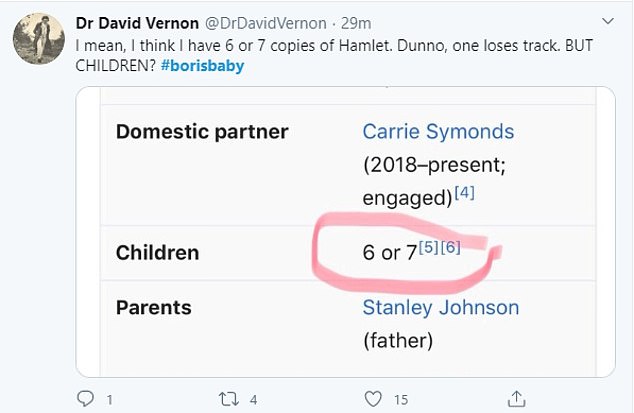 Elsewhere, there were plenty of snaps of blonde-haired babies doing the rounds, as social media comedians suggested that Boris junior may have been born with a mop of unruly hair like his father’s.

Others showed dancing toddlers jigging with joy, suggesting that’s how Mr Johnson might feel at the prospect of two weeks of paternity leave, after just two days back at Number 10 following his battle with Covid-19.

There was the gif of a cat furiously typing away, with its poster suggesting that it might be how ‘Eton’s administrative staff’ might look while adding the PM’s offspring to the private school’s waiting list.

Another kept in mind the couple’s ‘fur baby’, saying Dilyn would have a ‘beautiful friendship’ with the new baby. 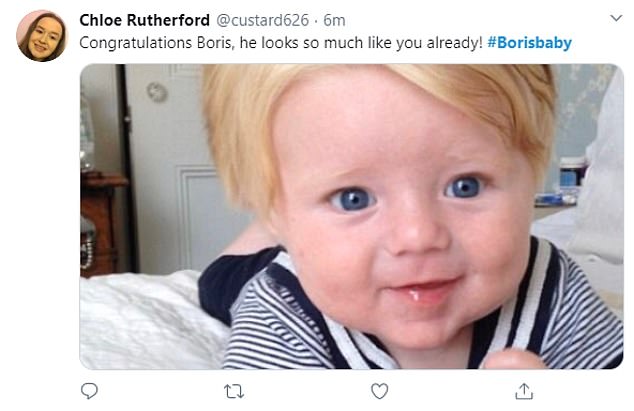 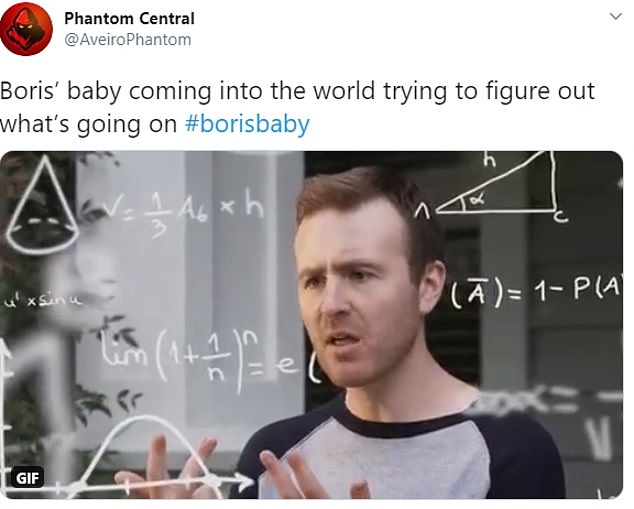 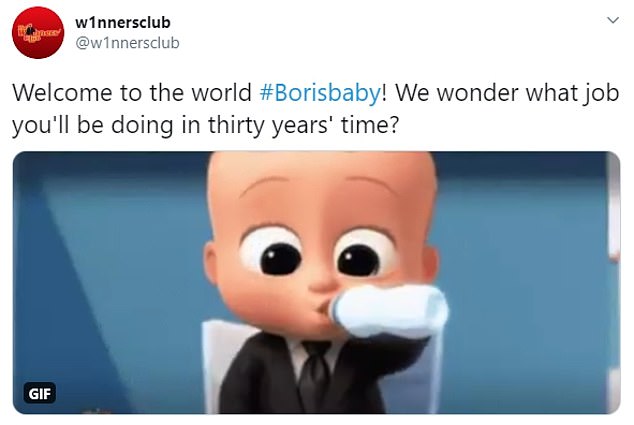 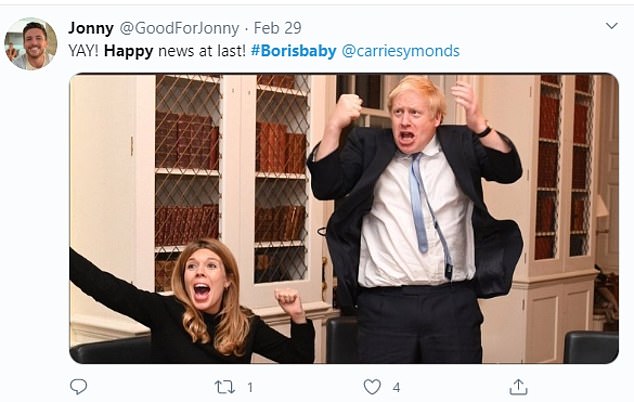 Mr Johnson is said to have been by his 32-year-old fiancee’s side throughout the labour before their son entered the world in the early hours of this morning.

The safe arrival of their child, Carrie’s first and Boris’ sixth, has come as a shock because Miss Symonds was expected to give birth later in the summer, although a due date was never confirmed by the couple.

They announced the pregnancy on February 29, days after the PM’s divorce from Marina Wheeler was confirmed, and got engaged while holidaying on the exclusive Caribbean island of Mustique over the new year. 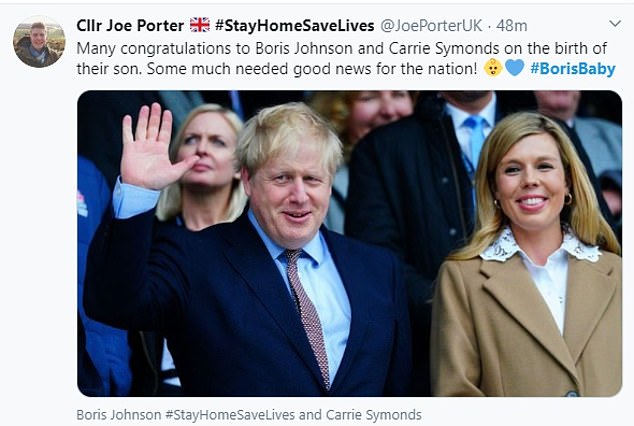 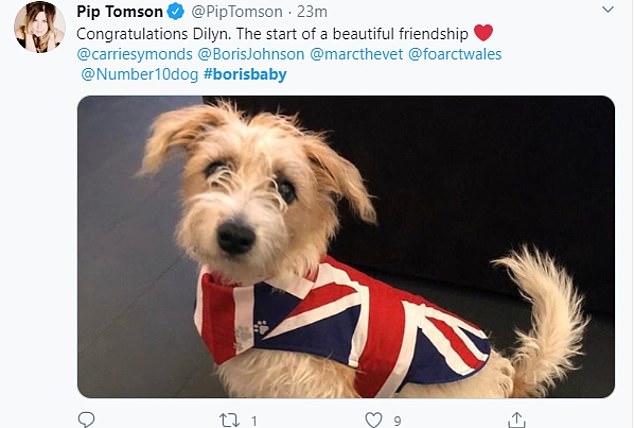 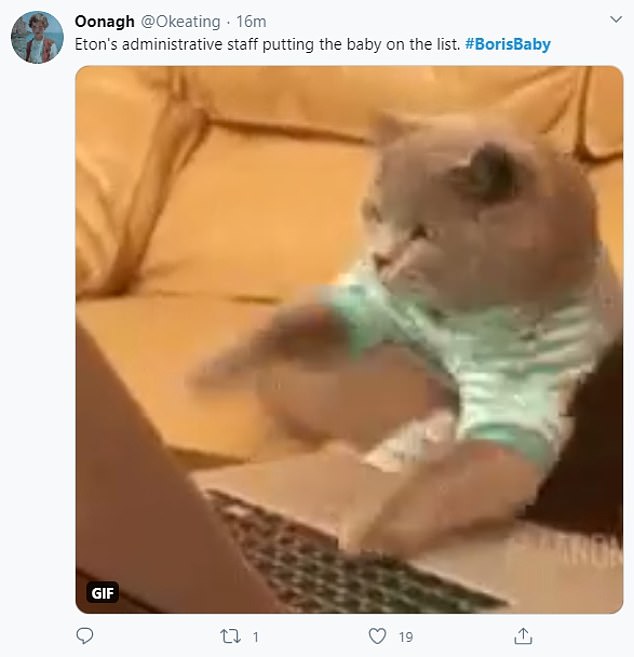 How many children does the PM have?

He also has a fifth child, Stephanie Macintyre, with art consultant Helen Macintyre. Ms Macintyre’s daughter is allegedly one of two children he fathered as a result of an affair.

The Appeal Court ruled in 2013 that the public had a right to know that he had fathered a daughter during an adulterous liaison while Mayor of London in 2009 – but also mentioned the possibility of a second baby.

It is not known if the Prime Minister has any more children – but his baby boy with Carrie Symonds is officially his sixth.

Announcing the birth of their son, who has not been named yet, his spokesperson said: ‘The Prime Minister and Ms Symonds are thrilled to announce the birth of a healthy baby boy at a London hospital earlier this morning.

Both mother and baby are doing very well. The PM and Ms Symonds would like to thank the fantastic NHS maternity team.

No 10 have not revealed the hospital they went to – although St Thomas’, where Mr Johnson was in intensive care this month, is the closest to Downing Street. It was previously reported that Carrie had wanted a home birth but these have largely suspended by the NHS because of coronavirus.

Mr Johnson said in early March that he is likely to take his two-week paternity leave when their child is born – but it is not known if he will take a fortnight off now at a time of national emergency.

There are also concerns that key decisions over the coronavirus lockdown and how to ease Britain out of it will be delayed because of the Prime Minister’s new baby.