One hospital worker counted at least 30 bodies amid fears of possibly many more.

The attack in Mogadishu occurred on a day when the president, prime minister and other senior officials were meeting to discuss expanded efforts to combat violent extremism, especially by the al Qaeda-affiliated al-Shabab group that often targets the capital.

It also came five years after another massive blast in the exact same location killed more than 500 people. 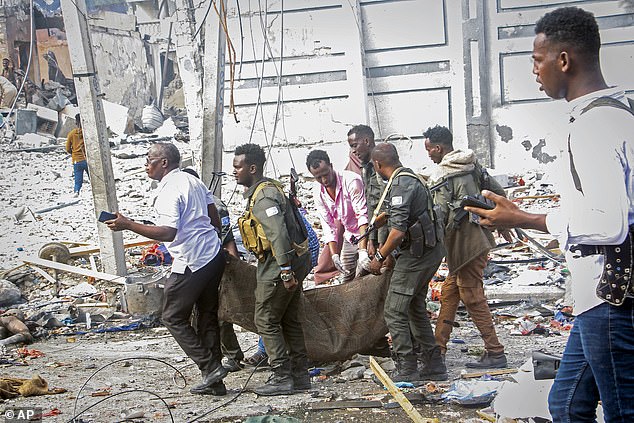 One hospital worker said they have seen at least 30 dead bodies, though there is no exact death toll yet 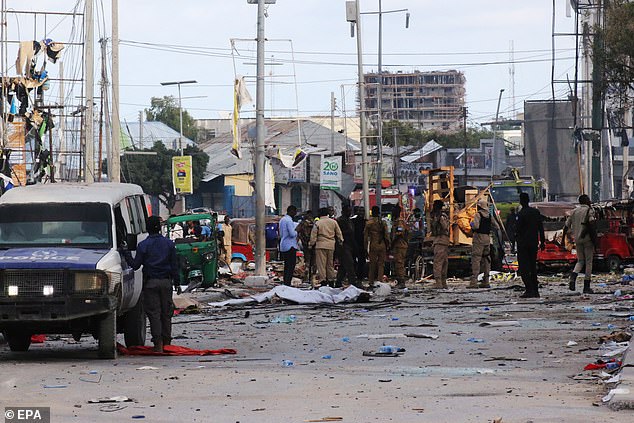 Security officials claim Al-Shabab are responsible, but the terror organisation rarely admits its role in attacks which claim the lives of large numbers of civilians

There was no immediate claim of responsibility. Al-Shabab rarely claims attacks with large numbers of civilians killed, as in the 2017 blast.

A volunteer at the Medina hospital, Hassan Osman, said ‘out of the total of at least 30 dead people brought to the hospital, the majority of them are women. I have seen this with my own eyes’.

At the hospital and elsewhere, frantic relatives peeked under plastic sheeting and into body bags, looking for loved ones.

The Aamin ambulance service said they had collected at least 35 wounded. One ambulance responding to the first attack was destroyed by the second blast, director Abdulkadir Adan added in a tweet.

‘I was 100 metres away when the second blast occurred,’ witness Abdirazak Hassan said.

‘I couldn’t count the bodies on the ground due to the (number of) fatalities.’

He said the first blast hit the perimeter wall of the education ministry, where street vendors and money changers were located.

An Associated Press journalist at the scene said the second blast occurred in front of a busy restaurant during lunchtime. The blasts demolished tuk-tuks and other vehicles in an area of many restaurants and hotels.

He saw ‘many’ bodies and said they appeared to be civilians traveling on public transport. 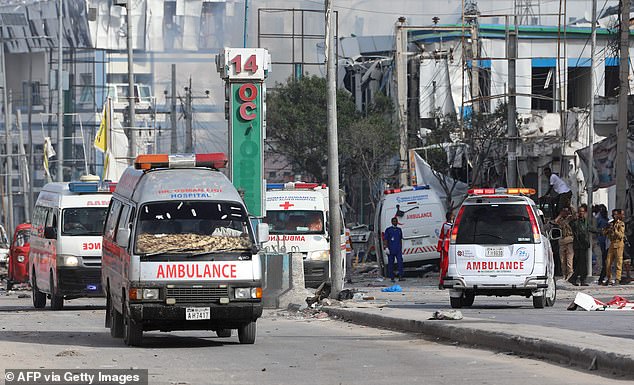 Ambulances raced to the scene to pick up the wounded, while many bodies were found lying in the street 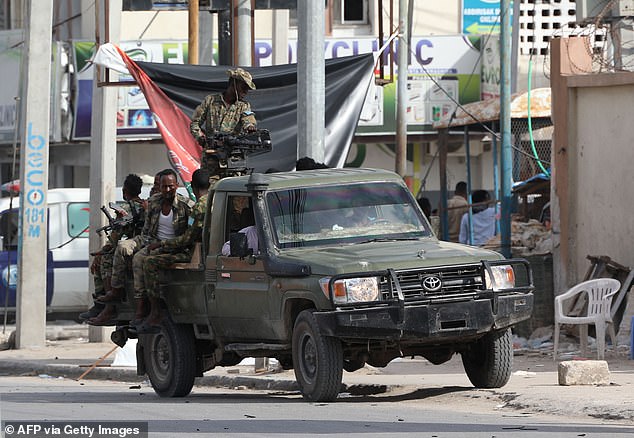 The Somali Journalists Syndicate, citing colleagues and police, said one journalist was killed and two others wounded by the second blast while rushing to the scene of the first.

The attack occurred at Zobe junction, which was the scene of a huge al-Shabab truck bombing in 2017 that killed more than 500 people.

Somalia’s government has been engaged in a high-profile new offensive against the extremist group that the United States has described as one of al Qaeda’s deadliest organisations.

The president has described it as ‘total war’ against the extremists, who control large parts of central and southern Somalia and have been the target of scores of US airstrikes in recent years.

The extremists have responded by killing prominent clan leaders in an apparent effort to dissuade support for that government offensive.

On Saturday, Prime Minister Hamza Abdi Barre said the attack would not dampen the public uprising against al-Shabab, and he and the president expressed the government’s determination to wipe out the extremist group.