A pair of miracle twins born on a leap day celebrate their first birthday despite being four years old.

Twins Kody and Leo, from Shipley, West Yorkshire, officially turn one today – four years after they were born by emergency c-section on February 29 2016.

And the twins are not the only ones celebrating their unusual birthday, as centenarian Vera Blundell from Romsey, Hampshire, will blow out her candles for just the 25th time.

Brothers Kody and Leo, from Shipley, West Yorkshire, officially turn one today despite being four

The 100-year-old great-grandmother is one of around five million so-called ‘leaplings’ across the world born on February 29, a day which falls just once every four years.

Parents Sally Jennings and Robert Jacques were elated to discover they were expecting naturally conceived twins in 2015.

However they were dealt a devastating blow when Sally developed Hellp Syndrome, a potentially-fatal pregnancy complication which caused organ failure at six months. 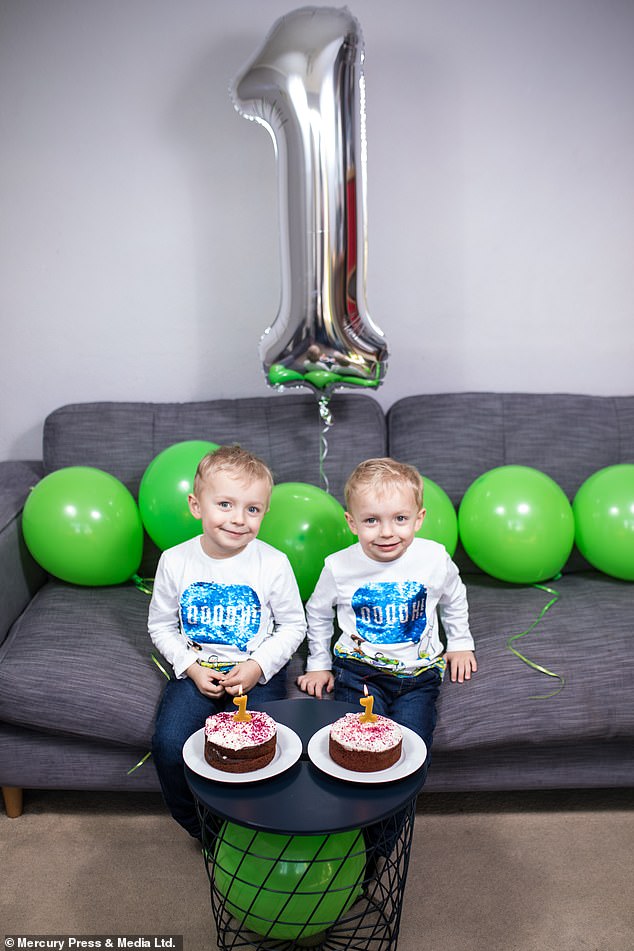 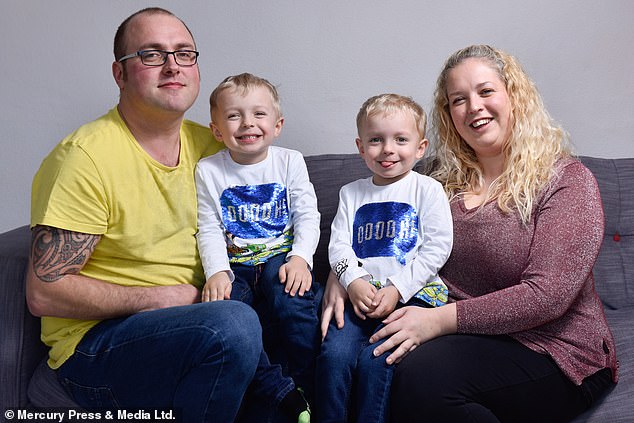 The support worker was rushed into theatre at 7pm on February 29, 2016 to deliver the boys eight weeks before her April due date, with Kody weighing 4lbs 1oz and his brother Leo weighing 3lbs.

But the family say their boys’ peculiar birthday makes them even more special and admit people are stunned when they reveal the boisterous four-year-olds are ‘leaplings’ and have only just turned one.

Production operative Robert said: ‘It’s the look on people’s faces when you tell them, they don’t really understand and it takes them a while to get it. 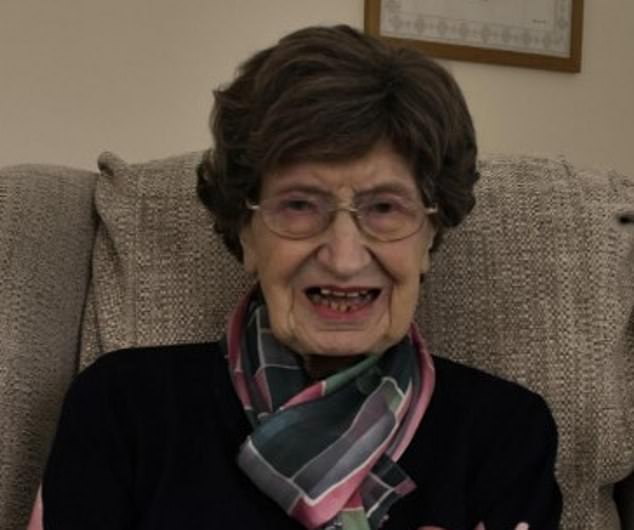 Centenarian Vera Blundell from Romsey, Hampshire, will blow out her candles for just the 25th time today

‘I thought most people knew about leap years but some people have never even heard of it or they’ve never really realised that there would be people born on February 29.

‘A couple of months before the boys were born, we were talking about when they were going to arrive and made the joke that it was a leap year so it could happen then, but because they were due in April we never thought they would actually come then.

‘When they were born I was joking saying it was going to be nice and cheap when it came to birthdays.’ 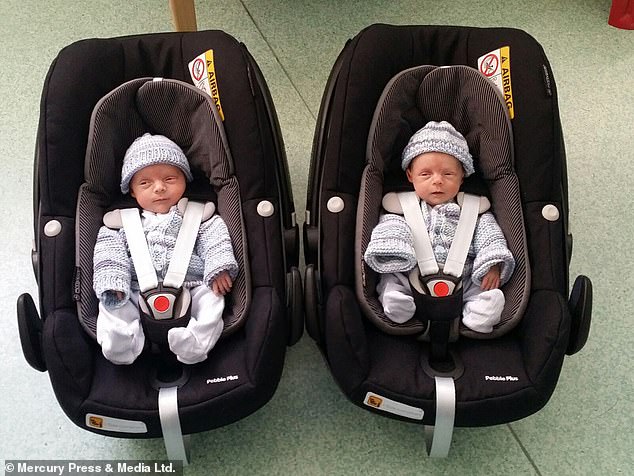 Father Robert said: ‘When they were born I was joking saying it was going to be nice and cheap when it came to birthdays.’ Pictured: Twins Leo and Kody as newborns

Despite some minor bleeding, Sally’s pregnancy had seemed relatively uncomplicated until she started experiencing serious fatigue and black flashes in her vision at six months along.

The mother-to-be was diagnosed with pre-eclampsia, a common disorder in women pregnant with twins, which causes high blood pressure and low platelet count.

According to the Office for National Statistics 10,796 people have been born on February 29 since 1995.

Most countries and territories tend to recognise that a Leap Day baby has legally ‘aged’ on March 1 of non-Leap Years, including England, Wales, Hong Kong.

Famous stars with a February 29 birthday is Superman along with The Godfather actor Alex Rocco, rapper Saul Williams and Get Shorty actor Dennis Farina.

She later developed potentially fatal Hellp Syndrome which saw her red blood cells begin to rupture and kidneys start to fail and she was rushed to theatre, where the boys were born just after 10pm.

Sally said: ‘I think because of what we were going through at the time we didn’t really think about it until after they were born.

‘It was quite exciting when it sunk in that we had leap year babies.

‘They’re still quite young so I don’t think they fully understand yet, but we do tell them they’re leaplings and that even though they’re four they’re technically only turning one.

‘We haven’t really experienced any problems with the birth date so far but I suspect as they get older and they have to fill their date of birth out on paperwork they might face more everyday issues with it.

‘I think it just makes it feel all the more special really and hopefully when they get older they will feel special to them too.

‘The bond between them as twins is so strong, it’s something we will never be able to truly understand.

‘I think the fact they are leap year babies just heightens that even further.’

Revealing the secret to a long life, great-grandmonther Vera Blundell said ‘health and luck’, as well as an active lifestyle is her secret.

She plans to celebrate the milestone with a party organised by her family.

Mrs Blundell who has five grand-children and seven great grand-children – used to run a florists with her husband but has been retired for more than 30 years.

During the Second World War, she would cycle to work at the Edwin Jones department store in Southampton, despite daylight bombing overhead.

She met her husband, Harold Blundell, whilst working in the International Stores, and they married in June 1941.

Mr Blundell took on the family business, a fruit and vegetable shop, and developed the business over the years.

The couple went on to have three children, and were together for 58 years until Harold’s death in 1999.

The couple handed the business to their two daughters when they retired in 1989.

The former Royal Navy pilot who was born in 1944 put out an invitation for other leap year babies to attend a party at a hotel in Bude and had around 14 responses.

Speaking ahead of the party Christopher said: ‘It seemed a good idea to have such a party – I don’t know if it’s happened before – it may be unique. 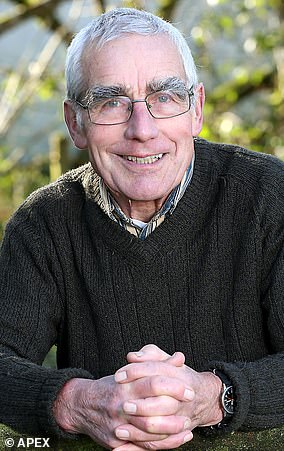 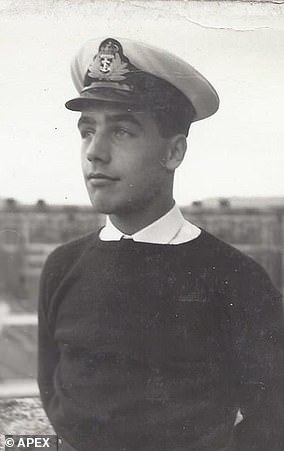 Christopher Darwin (left), 76, from Bude, Cornwall, celebrated his 19th birthday today. The former Royal Navy pilot was born in 1944 and joined the Navy in 1962 (right)

‘In my case I hardly remember birthdays one to four and beyond that I was working.

‘I married just after my eighth and my wife Heather has arranged several excellent birthday bashes since then.’ 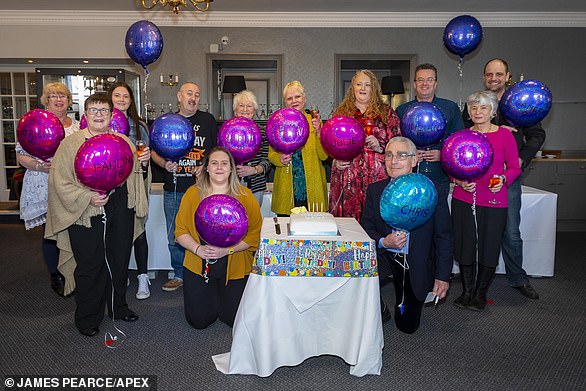 He added: ‘I plan name tags with birthday numbers and guests can certainly dress as their leap year ages.

‘I shall provide the buffet and the first hour (Happy Hour) of the drinks – under-age alcohol may be permitted.

He added: ‘I shall need some evidence – a passport, or a driving licence from the over-fives.’