At a hospital’s opening ceremony in Istanbul, he said: ‘They’re either going to understand the language of politics and diplomacy, or in the field with painful experiences.’

Ankara is currently facing off against Greece and Cyprus over oil and gas exploration rights in the eastern Mediterranean. All sides have deployed naval and air forces to assert their competing claims in the region.

‘They are going to understand that Turkey has the political, economic and military power to tear up the immoral maps and documents imposed,’ Erdogan added, referring to areas marked by Greece and Cyprus as their economic maritime zones.

Turkish President Recep Tayyip Erdogan (pictured) said Greece will ‘understand the language of politics and diplomacy, or in the field with painful experiences’

He stressed that Turkey was ‘ready for every eventuality and result’.

Meanwhile, Turkish media reported that tanks were being moved towards the Greek border.

The Cumhuriyet newspaper said 40 tanks were being transported from the Syrian border to Edirne in northwest Turkey and carried photographs of armoured vehicles loaded on trucks.

A military official speaking on condition of anonymity in line with government regulations said the deployment was a regular movement of forces and unconnected to tension with Greece.

The president’s comments come after NATO said military officers from Greece and Turkey had begun technical discussions to reduce the risk of armed conflict or accidents. 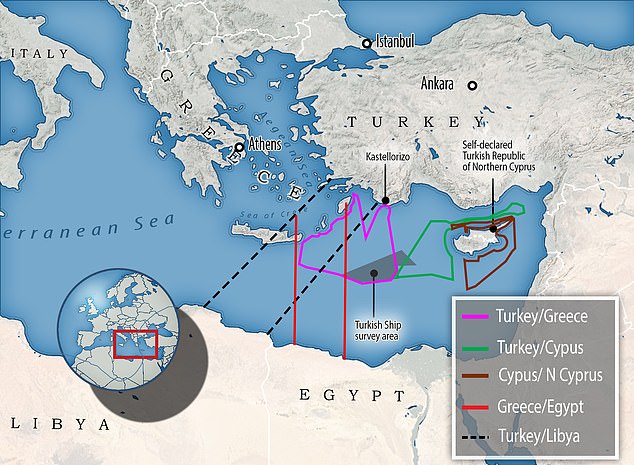 The two NATO allies have been locked for weeks in a tense standoff in the eastern Mediterranean, where Turkey is prospecting the seabed for energy reserves in an area Greece claims as its own continental shelf.

Ankara says it has every right to prospect there and accuses Athens of trying to grab an unfair share of maritime resources.

Simulated dogfights between Greek and Turkish fighter pilots have multiplied over the Aegean Sea and the eastern Mediterranean.

A Turkish and a Greek frigate collided last month, reportedly causing minor damage to the Turkish frigate but no injuries.

Erdogan said Turkey had repeatedly expressed its willingness to come to a just agreement.

He said: ‘Our word is sincere. The problem is those before us disregard our rights and try to situate themselves above us.’ 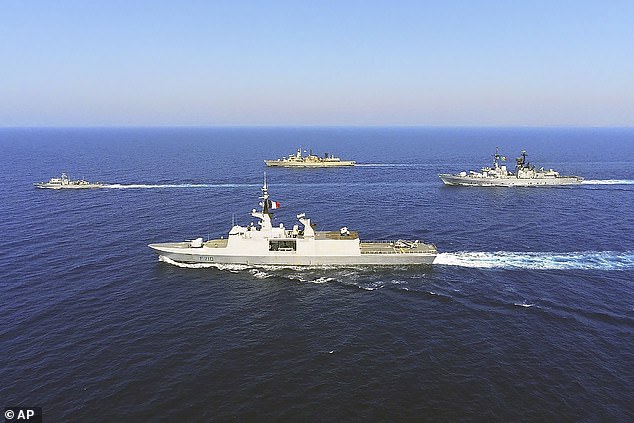 Ships from Greece, Italy, Cyprus and France participate in a joint military exercise which was held from August 26 to 28 south of Turkey in the eastern Mediterranean sea

Turkey faces a wide range of opponents in the eastern Mediterranean. France, Italy and the United Arab Emirates have all sent forces to join war games with either Greece or Cyprus in recent weeks.

Egypt has signed an energy exploration deal with Athens for the Mediterranean.

The European Union, which counts Greece and Cyprus as members, has also threatened possible sanctions against Ankara over its ‘illegal’ actions.

This week, the US announced it was easing a 33-year-old arms embargo against ethnically divided Cyprus.

The island split in 1974 when Turkey invaded following a coup by supporters of union with Greece. 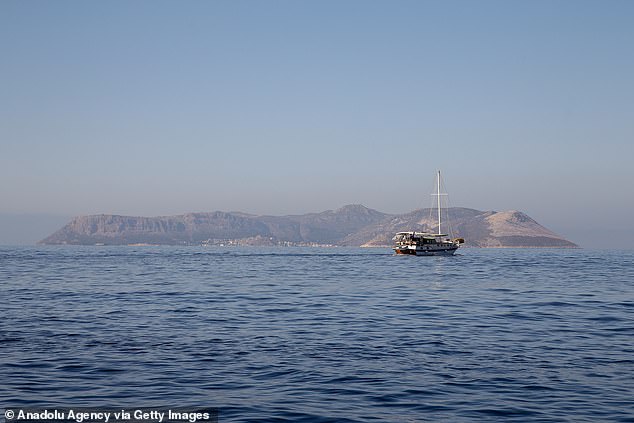 The Greek island Kastellorizo is just 1.2 miles from the Turkish coast and can be seen from Turkey’s Antalya province

Turkey is the only nation to recognise a Turkish Cypriot declaration of independence and it maintains more than 35,000 troops in northern Cyprus.

The recent crisis is the most serious in Turkish-Greek relations in decades. The neighbours have come to the brink of war three times since the mid-1970s, including once over maritime resources in the Aegean.

Tensions between the two countries escalated in August, with both sides staging military drills. 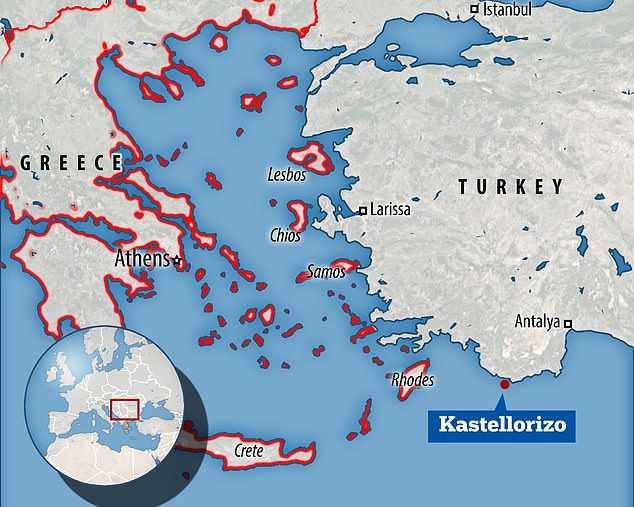 Turkey accused Greece of ‘piracy’ and attempting to ‘arm’ the island at the centre of their row energy resources in the Mediterranean.

Greece argues that waters surrounding Kastellorizo are under their sovereignty and oppose any Turkish exploration nearby.

The rocky island is the island furthest removed from Greece and is 1.2 miles off the Turkish coast.

On August 10, Turkish navy ships escorted an exploration vessel, the Oruc Reis, into the waters south of Kastellorizo.

Four days before, Greece had signed an agreement with Egypt on the two countries’ respective maritime economic zones, which the parliament in Athens waved through on Thursday.

But its claim that the waters around the island are under Greek sovereignty had Ankara seeing red, after recent discoveries of large gas deposits in the eastern Mediterranean.

A Greek and a Turkish warship were involved in a mild collision on August 14 during a standoff in the eastern Mediterranean, in what a Greek defence source called an accident but Ankara described as a provocation. 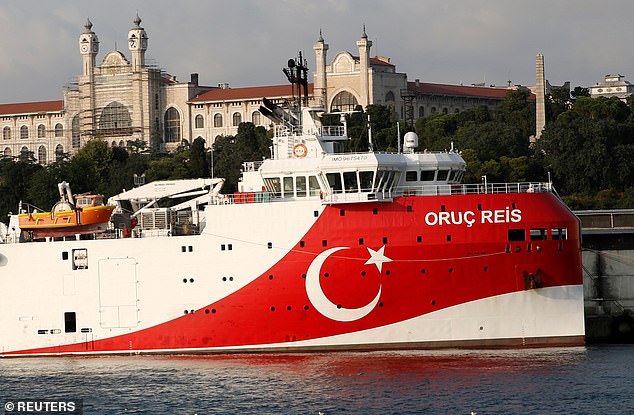