Turkey’s foreign ministry condemned Wednesday’s siege of the US Capitol building by supporters of President Trump as America’s global rivals seized on the chaotic scenes from Washington.

Turkey called for calm and urged for ‘common sense’ to resolve the ‘political crisis’ in the US after protesters broke into the United States Capitol aimed at thwarting a peaceful transfer of power to President-elect Joe Biden.

President Recep Tayyip Erdogan’s Foreign Ministry called the events ‘worrying’, saying ‘we believe that the US will overcome this domestic crisis calmly,’ with Turkish citizens in the US being urged to stay away from crowded places where demonstrations are held.

‘We follow the events in the USA with concern and invite the parties to calmness. We believe that problems will always be solved within law and democracy,’ Turkey’s Parliament Speaker Mustafa Sentop said on Twitter.

‘As Turkey, we have always been in favour of the law and democracy and we recommend it to everyone,’ he added.

Trump supporters gather outside the Capitol, Wednesday, Jan. 6, 2021, in Washington. As Congress prepares to affirm President-elect Joe Biden’s victory, thousands of people have gathered to show their support for President Donald Trump and his claims of election fraud 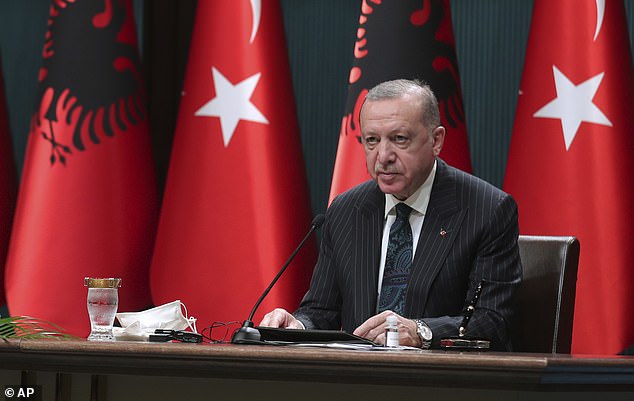 Turkey’s President Recep Tayyip Erdogan, pictured on Wednesday. Turkey’s foreign ministry called the events in the US ‘worrying’, saying ‘we believe that the US will overcome this domestic crisis calmly’

‘We follow the events in the USA with concern and invite the parties to calmness. We believe that problems will always be solved within law and democracy,’ Turkey’s Parliament Speaker Mustafa Sentop said on Twitter (pictured)

A number of allies also reacted with alarm to the scenes in Washington DC as a number of countries outside the US maintained live coverage of the events.

In the UK, Prime Minister Boris Johnson said the scenes were ‘disgraceful’ and called for the peaceful transition of power, with Biden’s inauguration set to take place on January 20, when he would take over from the incumbent.

‘Disgraceful scenes in U.S. Congress,’ Johnson tweeted. ‘The United States stands for democracy around the world and it is now vital that there should be a peaceful and orderly transfer of power.’

Keir Starmer, Leader of the UK Labour Party – the country’s opposition party – also reacted to the events, saying: ‘Horrendous scenes from the US. These are not ‘protesters’ – this a direct attack on democracy and legislators carrying out the will of the American people.’

The first minister of Scotland Nicola Sturgeon described the scenes as ‘utterly horrifying’ and called for ‘solidarity with those … on the side of democracy and the peaceful and constitutional transfer of power.’

Speaking to Canada’s News 1130 radio station in Vancouver, Canadian Prime Minister Justin Trudeau said that he was concerned and ‘following the situation minute by minute.’

‘I think the American democratic institutions are strong, and hopefully everything will return to normal shortly,’ he added.

In the UK, Prime Minister Boris Johnson said the scenes were ‘disgraceful’ and called for the peaceful transition of power on Twitter (pictured)

Keir Starmer, Leader of the UK Labour Party – the country’s opposition party said: ‘Horrendous scenes from the US. These are not ‘protesters’ – this a direct attack on democracy and legislators carrying out the will of the American people.’

German Foreign Minister Heiko Maas said: ‘Enemies of democracy will be happy to see these unbelievable pictures from #WashingtonDC,’ he wrote. ‘Riotous words turn into violent acts — on the steps of the Reichstag, and now in the #Capitol. The disdain for democratic institutions is devastating’

German Foreign Minister Heiko Maas said: ‘Enemies of democracy will be happy to see these unbelievable pictures from #WashingtonDC. Riotous words turn into violent acts — on the steps of the Reichstag, and now in the #Capitol. The disdain for democratic institutions is devastating.’

Protesters in Germany attempted to story the Reichstag government building in Berlin during a mass rally against coronavirus restrictions.

‘The United States Congress has been the symbol of freedom and democracy around the world for centuries,’ wrote Armin Laschet, the leader of North Rhine-Westphalia, Germany’s most populous federal state. 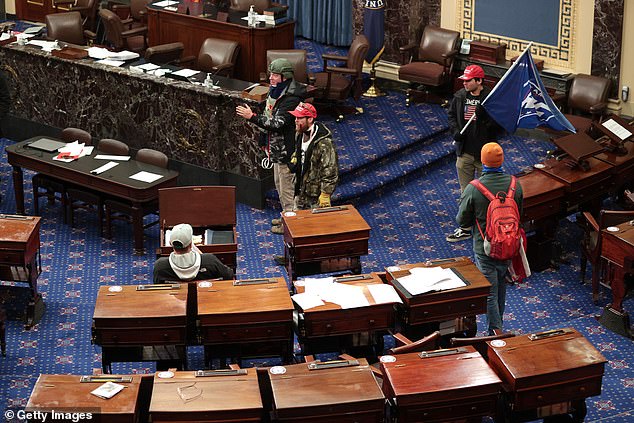 ‘The attacks on the Capitol by fanatical Trump supporters hurt every friend of the United States,’ he said.

Wednesday’s ordinarily mundane procedure of Congress certifying a new president was always going to be extraordinary, with Republican supporters of Mr Trump vowing to protest over the results of an election that they have baselessly insisted was reversed by fraud.

But even the unusual deliberations, which included the Republican vice president and Senate majority leader defying Mr Trump’s demands, were quickly overtaken.

In a raucous, out-of-control scene, protesters fought past police and breached the building, shouting and waving Trump and American flags as they marched through the halls.

One person was reported shot at the Capitol, according to a person familiar with the situation. That person’s condition was unknown.

The attack forced politicians to rush from the building and interrupted challenges to Joe Biden’s Electoral College victory. 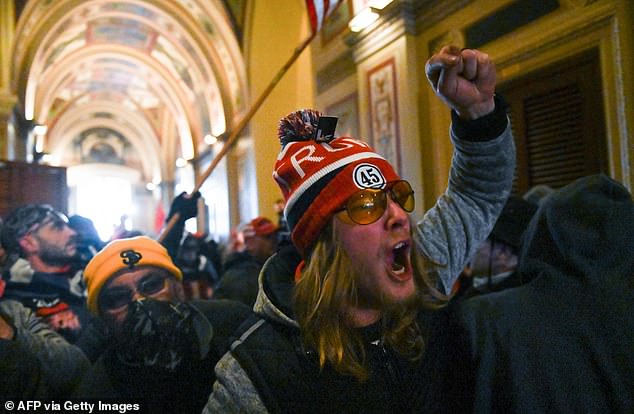 Supporters of US President Donald Trump protest inside the US Capitol on January 6, 2021, in Washington, DC

President Trump issued a restrained call for peace well after the protests was under way but did not urge supporters to disperse. Earlier he had seemingly egged them on to march to Capitol Hill.

Senators were being evacuated. Some House politicians tweeted they were sheltering in place in their offices.

Demonstrators fought with Capitol Police and then forced their way into the building, not long after a huge rally near the White House during which Trump egged them on to march to Capitol Hill.

Politicians had convened for an extraordinary joint session to confirm the Electoral College results.

Though fellow Republicans were behind the challenge to Biden’s 306-232 Electoral College victory, Senate Majority Leader Mitch McConnell sought to lower tensions and argued against it. He warned the country ‘cannot keep drifting apart into two separate tribes’ with ‘separate facts.’

Mr McConnell declared: ‘The voters, the courts and the states all have spoken.’

But other Republicans, including House GOP leaders among Mr Trump’s allies were acting out the pleas of supporters at his huge Wednesday rally up Pennsylvania Avenue outside the White House to ‘fight for Trump.’

‘We have to fix this,’ said Rep Steve Scalise of Louisiana, the GOP whip.

The last-gasp effort is all but certain to fail, defeated by bipartisan majorities in Congress prepared to accept the November results. Mr Biden is to be inaugurated on January 20. 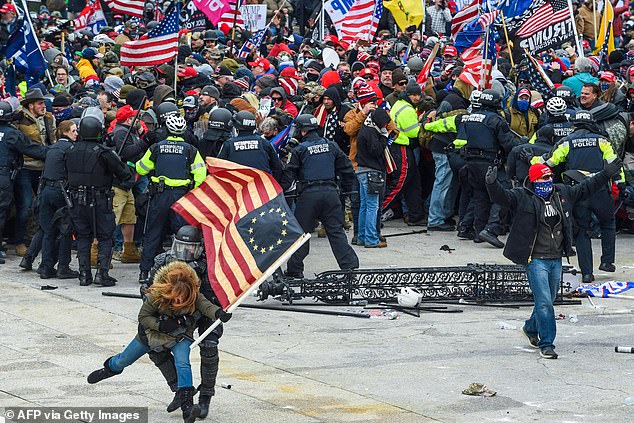 Trump supporters clash with police and security forces as they storm the US Capitol in Washington, DC on January 6, 2021

Still, Mr Trump vowed to he would ‘never concede’ and urged the massive crowd to march to the Capitol where hundreds had already gathered under tight security.

‘We will never give up,’ Mr Trump told his noontime rally.

Vice President Mike Pence was closely watched as he stepped onto the dais to preside over the joint session in the House chamber.

Mr Pence has a largely ceremonial role, opening the sealed envelopes from the states after they are carried in mahogany boxes used for the occasion, and reading the results aloud.

But he was under growing pressure from Trump to overturn the will of the voters and tip the results in the president’s favour, despite having no legal power to affect the outcome.

‘Do it Mike, this is a time for extreme courage!’ Mr Trump tweeted.

But Mr Pence, in a statement shortly before presiding, defied Mr Trump, saying he could not claim ‘unilateral authority’ to reject the electoral votes that make Mr Biden president.