EXPRESS INFORMER > News & Politics > Tucker Carlson taunts CNN as he tells them ‘Fox News will be around for a long, long time’

Fox News’ Tucker Carlson revealed on his Friday night show that CNN is allegedly attempting to force the network off the air and has contacted six cable carriers about discontinuing service.

Earlier on Friday, CNN journalists had blasted Fox for being ‘irresponsible and dangerous’ and slammed Carlson, in particular, for not saying that the rioting Trump supporters on Wedneday were mounting an insurrection.

‘With enemies like this, Fox News will be around for a long, long time,’ Carlson claimed at the end of a long monologue in which he tore into rival host Brianna Keilar and branded CNN’s president Jeff Zucker ‘the dwarf king’.

The Fox host voiced his anger after a scathing segment from Keilar in which she accused him of being ‘entirely fantastical’.

Keilar had also ripped into Carlson on her own Twitter account branding him ‘a propagandist. A liar. A parasite’ for his coverage of the riots and Trump’s presidency in general.

Fox News’ Tucker Carlson, pictured, claimed during his Friday night show that CNN is attempting to take the network off the air in an angry tirade against the Trump rival 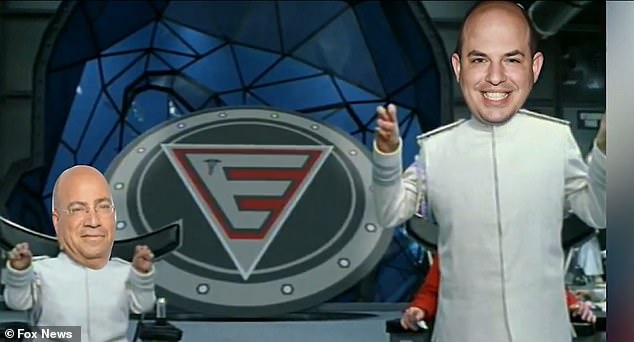 Carlson also launched himself into an extended skit about Zucker in which he cast him as Mini-Me and correspondent Brian Stelter as Dr. Evil, as pictured above

Carlson was also responding to an article from CNN’s Oliver Darcy in which he questioned whether cable carriers should follow guidelines on the content they disseminate and if they should discontinue carrying Fox.

‘So why do AT&T (which I should note is CNN’s parent company), CenturyLink, and Verizon carry OAN? Why do AT&T, CenturyLink, Verizon, Comcast, Charter, and Dish carry Newsmax?’ he questioned.

‘And why do they all carry Fox — which is, frankly, at times just as irresponsible and dangerous with its platform as its smaller competitor networks?

‘I asked all of these companies for comment on Thursday. I asked them if they have any guidelines governing the content that they carry on their platforms,’ Darcy continued.

‘I asked them if they have any regret over carrying right-wing channels that were in many ways partly responsible for what took place in our nation’s capital this week.’

Carlson was enraged by the article and used a segment of his show to berate his rivals for ‘calling for censorship’ of a competitor.

‘Friday morning, CNN announced that it is working to force the Fox News Channel off the air and run this company out of business,’ an angered Carlson said.

‘A number of prominent Democrats, including officeholders, support that effort. CNN staffers have already contacted the six major cable carriers in this country, the companies that carry our signal into your home, and pressured them to drop Fox News.

CNN’s Brianna Keilar had ripped into Carlson on Twitter branding him ‘propagandist. A liar. A parasite’ for his coverage of the riots and Trump’s presidency in general 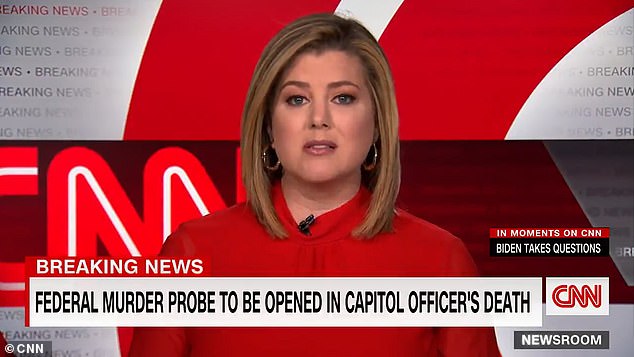 ‘On what pretext, you may ask? On the pretext that this show and others on the channel are directly responsible for the violence at the U.S. Capitol this week.

‘Here you have a news company calling for censorship, a TV network demanding that media conglomerates ban its competitors,’ Carlson continued to rant.

He then launched into his sketch in which he painted Zucker as ‘CNN’s blustery little dwarf king, calling into his morning staff meeting Thursday, having spent a long night sitting on the tiny throne in his apartment, feet dangling just above the floor, watching Fox News and getting angrier and angrier’.

‘By the time he reaches his minions in the CNN newsroom to deliver the day’s orders, the dwarf king’s fleshy face is quivering like jello and crimson with rage. “Make them stop!” he screams. “Make them stop!” The minions jolt to attention,’ he continues.

Carlson claimed that Keilar, who he identified as a former homecoming queen from Orange County, was the first to take up Zucker’s charge and that her main order had been: ‘Stop Fox’. 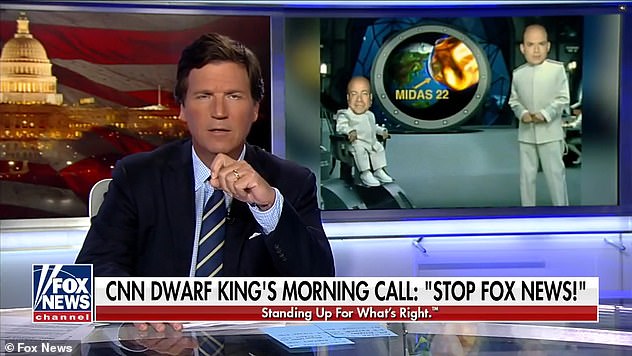 Much of the segment from Carlson involved him mocking CNN’s president Jeff Zucker and correspondent Brian Stelter as Dr. Evil, as pictured above 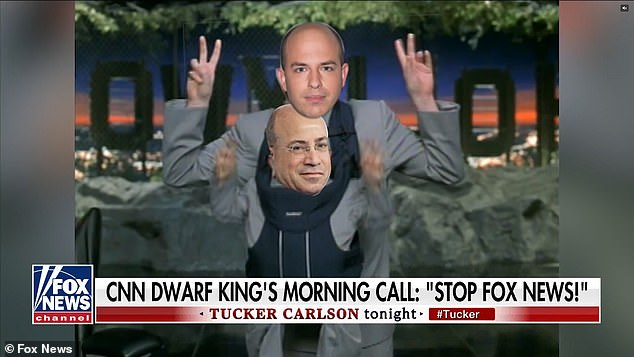 Carlson had even superimposed the pair onto the character’s bodies, pictured

The Fox Host then began to mock Keilar claiming that she had found the instruction ‘confusing’.

‘That was the main command. Then there was that stream of consciousness part, the part where the boss was breathing so heavily it was hard to make out the words. There was “White supremacy,” “insurrection,” “domestic terrorism,” something like that,’ he said of Zucker’s alleged instructions to his CNN hosts.

‘She tries to connect the dots. It’s confusing, but she’s pretty sure the word “insurrection” was in there. Someone “instructed,” maybe, or “acted incorrectly,” something like that. No, it was definitely insurrection. So, she decides to look up the word in the dictionary to see what it means.’

He then claimed that Keilar had been ‘blinded by her white privilege’ as she blasted Carlson for not calling Wednesday’s riot on the Capitol an insurrection.

‘That’s the thing about white privilege. If you keep doing it, you go blind. That’s what the boss said, anyway,’ he said of the CNN host.

CNN or Keilar has not yet responded to Carlson’s comments.

As Carlson raged against attempts to silence Fox News, some are saying cable companies do have an obligation to answer questions on their standards of content.

In an analytical piece on CNN, author Oliver Darcy writes that ‘it is time TV carriers face questions for lending their platforms to dishonest companies that profit off of disinformation and conspiracy theories.

‘After all, it was the very lies that Fox, Newsmax, and OAN spread that helped prime President Trump’s supporters into not believing the truth: that he lost an honest and fair election,’ Darcy writes.

He asked the leading cable providers if they have guidelines ‘governing the content that they carry’ but only received a response from one, CenturyLink.

The company said it provides ‘a variety of broadcast channels covering thousands of topics’ but does not ‘endorse specific media or outlets.’

AT&T, Verizon, Comcast, Charter and Dish did not respond to a request for comment.