Any investment that has generated wealth since before the Coronation must have firm foundations. That is true for the 36 investment trusts that predate the Queen’s accession to the throne.

They have survived the stock market crashes that peppered the early 1970s, October 1987 (Black Monday), 2000 (the bursting of the dotcom bubble), 2008 and 2020 in the wake of the pandemic. Some of the oldest trusts have invested customers’ money through the reign of six Monarchs.

So what is the secret to their longevity?

Looking ahead: Among the 36 trusts in existence longer than the Queen’s reign, some could provide excellent future returns

The earliest trusts were created under Queen Victoria to allow ordinary investors to benefit from global industrial expansion.

Foreign & Colonial was the first, established in 1868 and investing in government bonds from across the world, including South America. Later, Scottish American funded the construction of the US railways while Scottish Mortgage offered mortgages to Malaysian plantation owners who produced the rubber used in the tyres of the Model T Ford car.

Several trusts have the word ‘Scottish’ in their name as they were founded so that Dundee merchants, who were profiting from a boom in sales of jute – a natural fibre – had somewhere to stash their money.

John Newlands, an investment trust historian, says F&C was started to give the investor of ‘moderate means’ a chance to make money. It is a role the trust still fulfils. He says: ‘Fads, fashions and arcane financial schemes have come and gone over the past 70 years, but investment trusts have survived and thrived, based on granite-like foundations.’

Since their inception, the assets held by the UK’s oldest trusts have changed. For example, F&C’s biggest holdings are now shares in tech giants Microsoft, Alphabet and Apple, while Scottish Mortgage holds Covid vaccine maker Moderna and electric car giant Tesla in its portfolio.

Myron Jobson, head of personal finance at investment platform Interactive Investor, says the trusts’ ‘nimbleness to adapt to fundamental economic shifts’ by changing the investments they favour confirms ‘the robustness of their strategy’.

Annabel Brodie-Smith, a director of the Association of Investment Companies, says portfolio changes prove the ability of these stalwarts to adapt. She adds: ‘It’s reassuring for investors to see that over the last 70 years, investment companies have survived bouts of market turbulence.’

According to Investment platform AJ Bell, over the past 20 years, Scottish Mortgage has turned £1,000 into £13,150. BlackRock Smaller Companies, founded in 1906 as the North British Canadian Investment Company, has turned the same sum into £9,349. No trusts predating the Queen’s accession would have lost money over 20 years. The lowest return is 106.3 per cent from Aberdeen Diversified Income & Growth.

James Carthew, investment trust specialist at fund data group QuotedData, agrees the flexibility older trusts have shown has been key to their success, saying: ‘One of the strengths is their ability to adapt to changing market environments.’

An independent board steers the trust, hiring and firing investment managers, adapting objectives and driving down management fees.

However, Carthew says most of the older trusts focus on equities. So investors wanting to invest in different types of assets, such as property, infrastructure and renewable energy, will need to look at newer trusts.

Kyle Caldwell, fund specialist at Interactive Investor, says people must also be aware that investment trusts have features making them riskier than competing vehicles, such as unit trusts or open ended investment companies. The managers can borrow money to increase a trust’s exposure to equities, improving returns if stock markets are rising, but perpetuate losses if share prices are sliding. And because trusts are traded on the stock market, their share price may not fully reflect the value of the underlying assets.

He says: ‘They were once derided as ‘dinosaurs’ run by fuddy-duddies, but, 70 years since the Queen’s accession to the throne, they are thriving rather than becoming extinct.’ 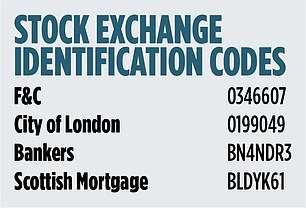 The funds to pick

Among the 36 trusts in existence longer than the Queen’s reign, some could provide excellent future returns.

Over the past three years, the trust has delivered an overall return of 17 per cent. Its income is equivalent to an annual 4.6 per cent.

Caldwell also rates Bankers because of its global diversity. Top holdings include American Express, Microsoft and AstraZeneca. Three-year returns are 20 per cent and the income is equivalent to 2 per cent a year.

Shares in Scottish Mortgage have almost halved from their November 2021 peak. But three-year returns still stand at 52 per cent. Carthew says the company’s focus on ‘identifying and backing future market leaders’ should ensure strong long-term returns.

He adds: ‘The longevity of these trusts and the strong corporate governance that keeps them focused on the needs of investors makes them ideal long-term savings vehicles.