U.S. President Donald Trump’s condition is improving as he is being treated for COVID-19 at a military hospital, and he could return to the White House as early as Monday, the doctors leading his treatment said on Sunday.

That word came the day after a series of contradictory messages from the White House about Trump’s condition caused widespread confusion about his health.

“The patient continues to improve. He has remained without fever since Friday morning, his vital signs are stable,” Dr. Sean Dooley told reporters outside Walter Reed National Military Medical Center in Bethesda, Md., where Trump has been receiving treatment since Friday.

Before his transfer to hospital, late Friday morning, Trump’s oxygen levels dipped and he had a high fever and was given supplemental oxygen for about an hour — but was not short of breath and was soon “moving about” with “only mild symptoms” — said his White House physician, Dr. Sean Conley.

“The fact of the matter is, he’s doing really well,” Conley said.

Trump tweeted thanks to his supporters early Sunday from the hospital. On Saturday, he released a four-minute video on Saturday in which he said the “real test” of his condition will come over the next few days.

“Over the next period of a few days, I guess that’s the real test, so we’ll be seeing what happens over those next couple of days,” Trump said into the camera, looking tired and wearing a jacket and open-necked shirt.

In Sunday’s tweet, Trump said “Thank you so much!” — referring to clusters of supporters who gathered on Saturday night outside the Walter Reed hospital waving Trump 2020 flags.

Trump’s illness has upended the campaign ahead of the Nov. 3 presidential election and cast a spotlight on the president’s handling of the pandemic. The Republican president is trailing Democratic rival Joe Biden in opinion polls.

A Reuters/Ipsos poll published on Sunday found that Biden had opened a 10-point lead over Trump nationally, slightly wider than it has been for the past two months. Some 65 per cent of Americans said Trump likely would not have been infected had he taken the virus more seriously — a view that half of registered Republicans polled supported. Some 55 per cent said they did not believe Trump had been telling the truth about the virus.

Trump has repeatedly played down the threat of the pandemic, even as it has killed more than 208,000 Americans and hammered the U.S. economy.

Differing assessments of Trump’s health from administration officials on Saturday left it unclear how ill the president had become since he tested positive for the coronavirus on Thursday night.

A White House team of doctors said on Saturday morning that Trump’s condition was improving and that he was already talking about returning to the White House.

Within minutes, White House chief of staff Mark Meadows gave reporters a less rosy assessment, saying, “The president’s vitals over the last 24 hours were very concerning, and the next 48 hours will be critical in terms of his care. We’re still not on a clear path to a full recovery.”

Meadows, whose initial comments were delivered on condition that he not be identified, altered his tone hours later, telling Reuters that Trump was doing “very well” and that “doctors are very pleased with his vital signs.”

He did not clarify the discrepancy in his comments. A Trump adviser who spoke on condition of anonymity said the president was not happy to learn of Meadows’s initial remarks.

Administration officials have described the move to Walter Reed as precautionary and said Trump would stay for several days.

However, in an interview with Fox News broadcast Saturday night, Meadows revealed that Trump’s condition on Friday was far worse than officials had made public, saying doctors recommended the president go to the hospital after seeing he had a fever and his blood oxygen level dropped rapidly.

White House physician Dr. Sean P. Conley told reporters outside the hospital on Saturday that Trump had not had trouble breathing and was not given oxygen at Walter Reed.

He declined to give a timetable for Trump’s possible release from the hospital and later had to issue a statement saying he misspoke after appearing to suggest Trump had been diagnosed as early as Wednesday.

In a statement on Saturday evening, Conley said the president was “not yet out of the woods,” but his team remained cautiously optimistic. 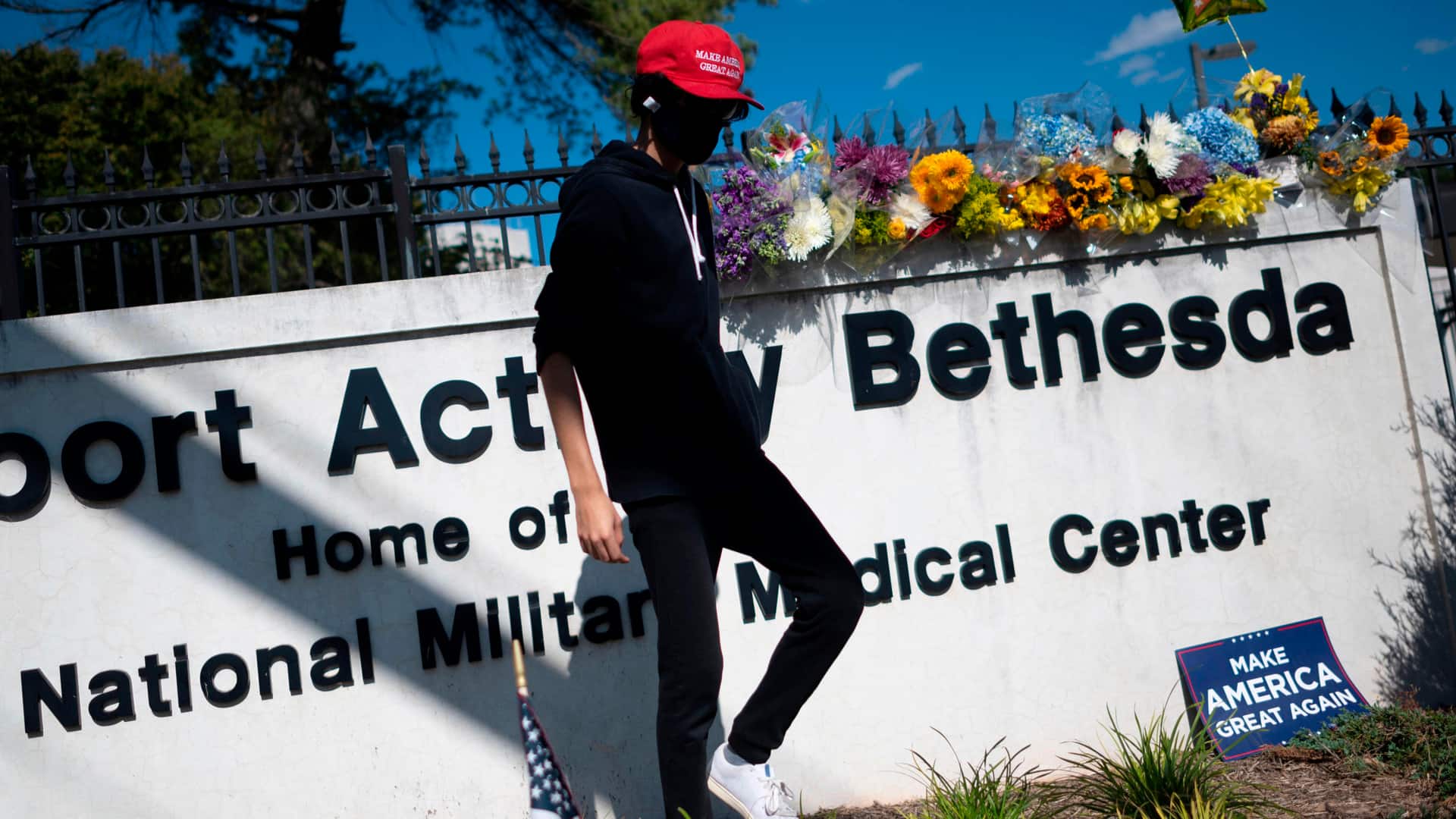 Republican strategist Seth Weathers says U.S. President Donald Trump’s illness could play well for him politically, as it could help voters feel more connected to him. 5:35

“Today’s spectacle — doctors saying one thing, White House sources saying another thing and both later amending their statements — only reinforces the credibility problems of this administration,” said Kyle Kondik, a political analyst at the University of Virginia’s Center for Politics.

With Trump off the campaign trail indefinitely, his campaign announced “Operation MAGA,” based on his slogan “Make America Great Again,” which will see high-profile allies — including Vice-President Mike Pence and Trump’s elder sons, Donald Jr. and Eric — take over in-person campaigning this week.

Biden, who largely avoided direct criticism of Trump during a campaign trip to Michigan on Friday, took a more aggressive tone on Saturday while speaking to a transit workers’ union, even as he wished the president well.

“I’m in a little bit of a spot here, because I don’t want to be attacking the president and the first lady now,” Biden said, adding he hoped Trump and his wife, Melania, who also has the illness, make a full recovery.

But he quickly turned to Trump’s response to the pandemic, calling it “unconscionable” and blasting the president’s comment in an interview this past summer that “it is what it is” when asked about the death toll.

Biden, who tested negative on Friday, told reporters he would next be tested on Sunday. His campaign will begin releasing the results of each test, a spokesperson said.

On the streets of New York, where the pandemic has taken a heavy toll, sympathy for U.S. President Donald Trump and his COVID-19 diagnosis was hard to find Friday. 1:00

Conley said Trump had received the first two doses of a five-day course of remdesivir, an intravenous antiviral drug sold by Gilead Sciences Inc that has been shown to shorten hospital stays.

He is also taking an experimental treatment, Regeneron’s REGN-COV2, as well as zinc, vitamin D, famotidine (sold under the brand name Pepcid), melatonin and Aspirin, Conley has said.