Donald Trump’s calm 10-minute public outing on Veterans Day belied a White House in tumult, as some of his aides say they are certain legal challenges won’t change the election result and they reveal he hasn’t attended an intelligence meeting in weeks.

Trump was seen for the first time in public in days Wednesday when he and first lady Melania visited Arlington National Cemetery to lay a wreath at the Tomb of the Unknown Soldier.

Also in attendance was Acting Defense Secretary Christopher Miller who replaced Mark Esper, after Trump fired him in a tweet Monday.

The president remained uncharacteristically quiet on the brief outing and he is yet to address the nation – other than through a barrage of tweets – since Joe Biden was called the winner of the presidential election Saturday.

However the visit marked a veneer of normalcy for a White House that’s frozen by a defeated president mulling his options, mostly forgoing the mechanics of governing and blocking his inevitable successor.

The president’s aides are growing more certain that legal challenges won’t change the outcome of the election, according to seven campaign and White House officials who spoke on the condition of anonymity to discuss the thinking of the president and others in the executive mansion.

And the president himself has also somewhat resigned himself to losing, according to insiders, who say he is only continuing to fight to keep up the performance for his fans.

Officials said he hasn’t attended an intelligence meeting in weeks, has done little to tackle the surge of coronavirus cases and is spending much of his time watching TV and making phone calls to governors of red states and Sean Hannity. 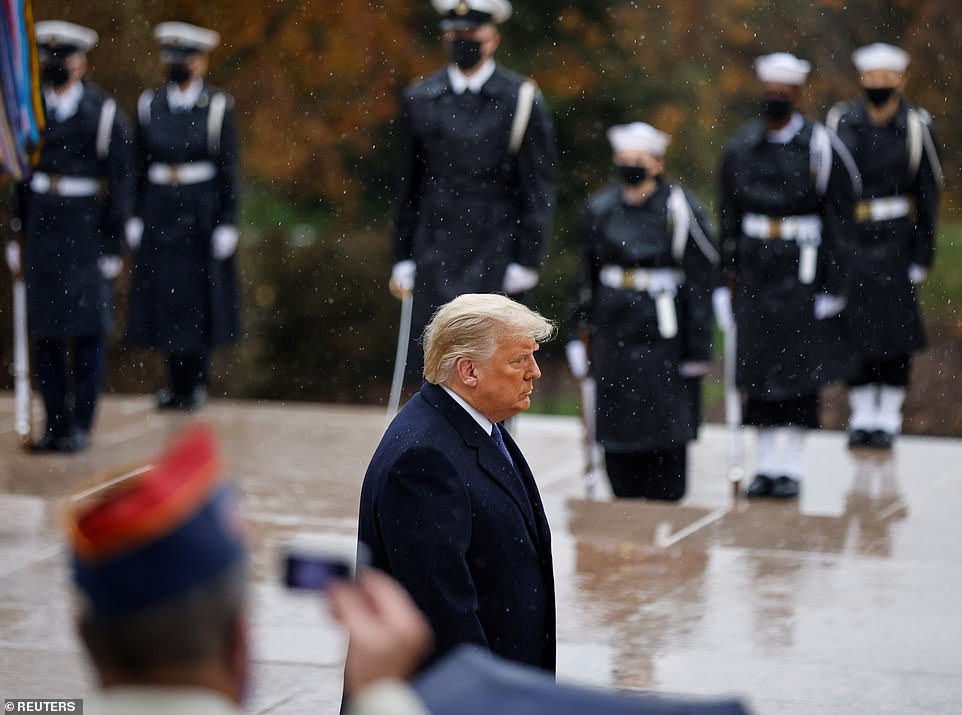 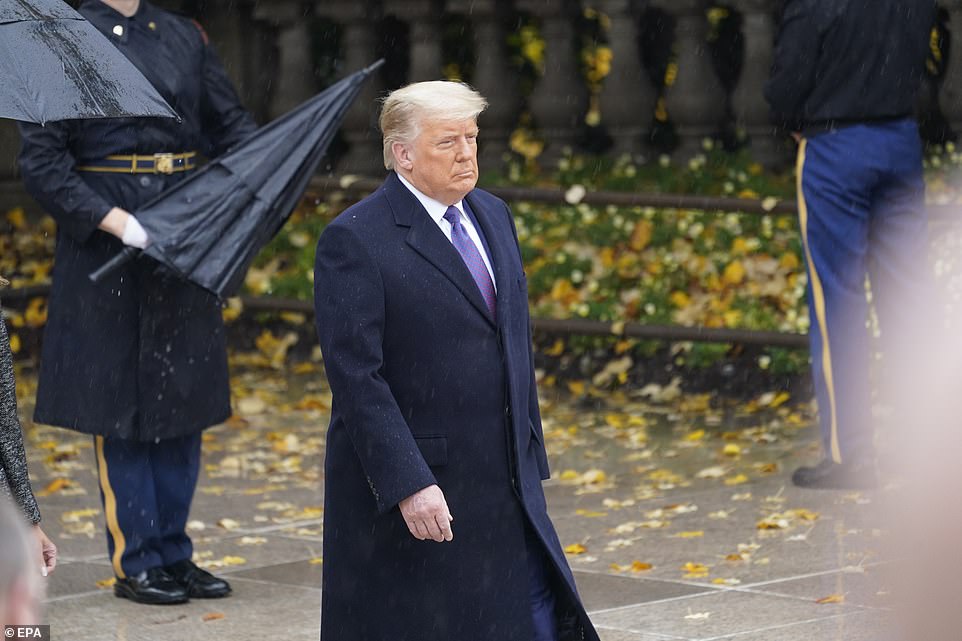 It marked his first public appearance since he was spotted playing golf Sunday. He has spent the past few days in private tweeting unfounded claims of voter fraud

Trump’s appearance at the annual Veterans Day commemoration at Arlington National Cemetery was his first public outing for official business in more than a week after he has spent the past few days in private tweeting unfounded claims of voter fraud.

The president has made no comments in person since Biden clinched the 270 electoral votes on Saturday needed to win the presidency.

Before setting off for the solemn commemoration at Arlington, Trump took to Twitter on Wednesday to slam ‘fake pollsters’ and grouse that a Republican city commissioner who defended the vote tabulation in Philadelphia wasn’t a true Republican.

He also sought to draw attention to a Pennsylvania poll worker who recanted allegations of voter fraud on Tuesday before reasserting his allegations on Wednesday.

Trump later posted a debunked video that had purported to show poll workers collecting ballots too late in California.

‘You are looking at BALLOTS! Is this what our Country has come to?’ Trump fumed.

Although his official schedule has been bare of public events, Trump has made several personnel moves – firing Mark Esper and installing three staunch loyalists in top defense jobs.

Some supporters pushed back against the notion that Trump is shirking his presidential duties.

‘The president is out there as much as he’s ever been on Twitter, and the White House team are moving ahead with budget and staffing priorities,’ said Dan Eberhart, a prominent Republican donor and Trump backer.

‘The president is understandably focused on the ballot counting, but at some point soon he needs to turn his attention back to the lame duck session and putting a capstone on his first four years.’

However, few senior staffers have been around the president in recent days, with many either in quarantine after testing positive for COVID-19 or in isolation after a confirmed exposure or simply not wanting to be near the Oval Office, according to White House staffers and campaign officials. 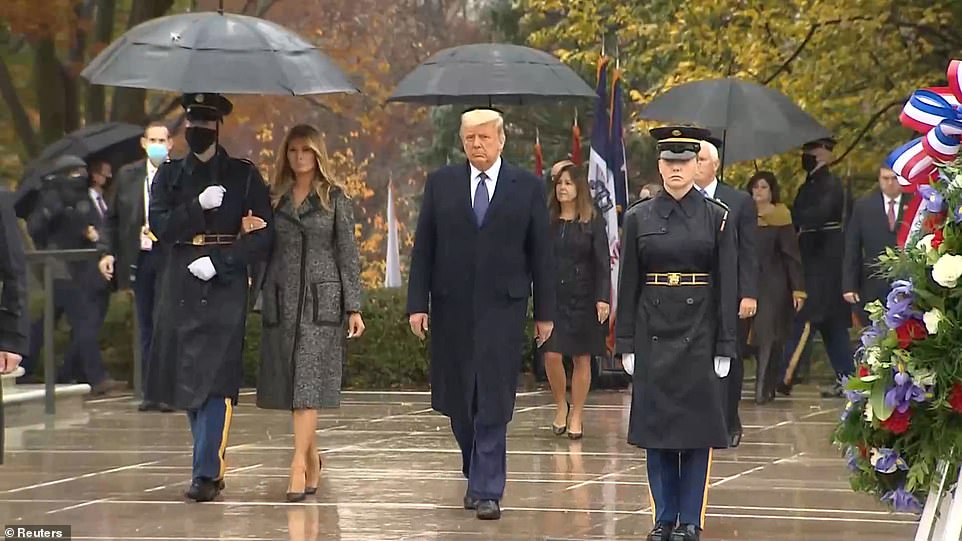 Trump and first lady Melania Trump walk in the rain into the cemetery for Veteran’s Day. The president has made no comments in person since Joe Biden clinched the 270 electoral votes on Saturday needed to win the presidency 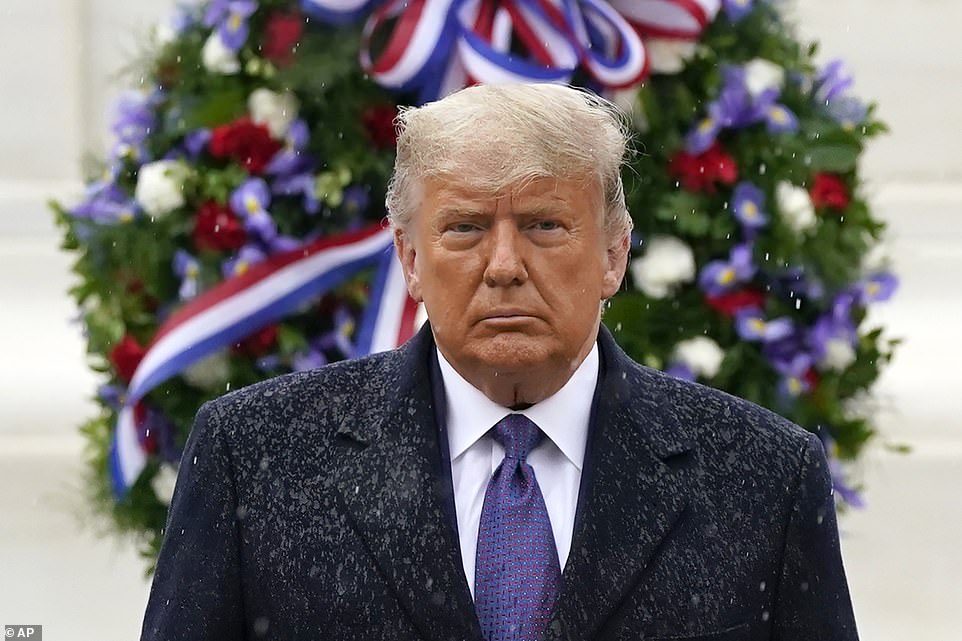 Trump, who was silent during the 10-minute visit, has not publicly addressed the nation since Joe Biden was called the winner of the election Saturday 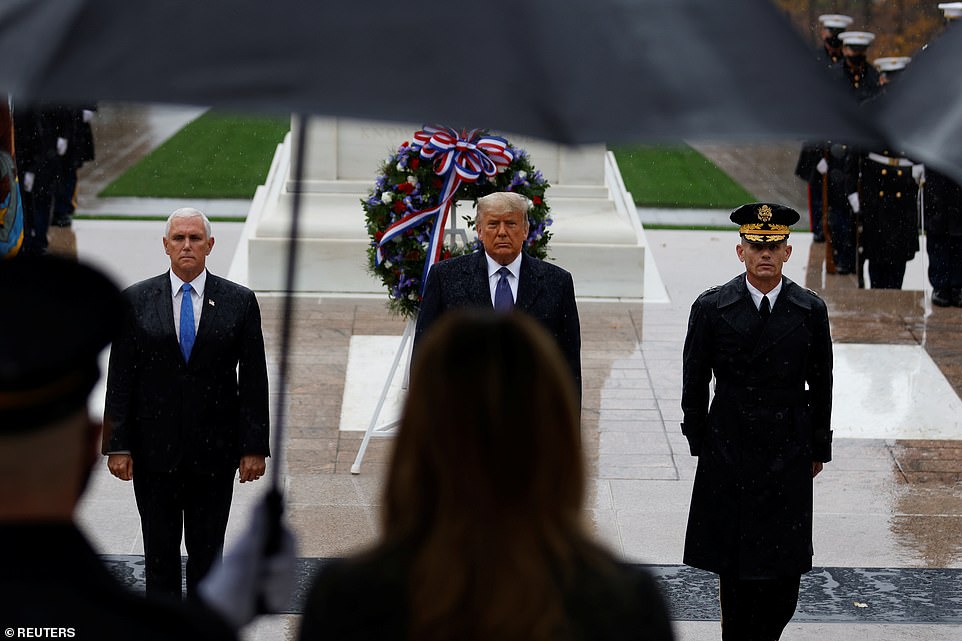 Some aides, who spoke on condition of anonymity, said he hasn’t attended an intelligence briefing in weeks 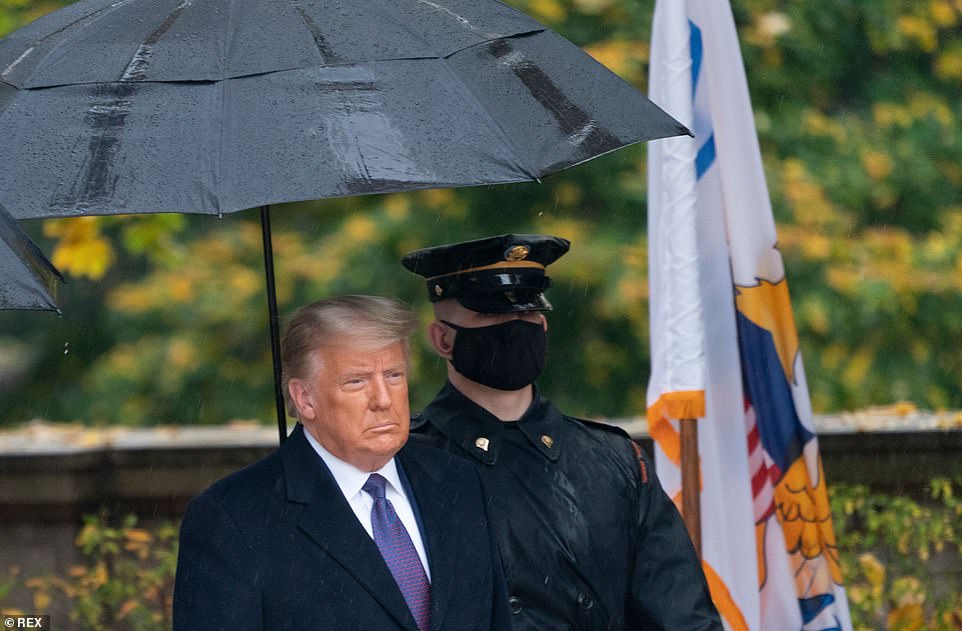 Trump is shielded from the rain. Some aides said they believe he knows he is defeated but must keep up the performance for his supporters

Staff working from the White House thinned out after chief of staff Mark Meadows confirmed last week that he had tested positive for the virus.

Some staffers still believe the election outcome can change with litigation and recounts.

But there is a growing recognition among most that the election is lost and the building will be vacated by January 20.

At times, he has seethed with anger, fuming that he lost to a candidate he doesn’t respect and believing that the media – including what he views as typically friendly Fox News – worked against him. In addition to misdoings with mail-in ballots.

But aides said he has been calmer than his tweets suggest, showing greater understanding of his predicament and believing he needs to keep fighting almost as performance, as a show to the 70 million people who voted for him that he is still battling.

In recent days, some aides, including his daughter Ivanka, have started to talk to him about an endgame, questioning how much longer he wants to fight.

Outside the White House, one prominent former ally turned Trump critic warned that the president was doing potentially irreparable damage to the Republican Party.

‘Trump’s time is running out, even as his rhetoric continues escalating.’

But no one in his inner circle – West Wing staff or Cabinet – is forcefully pushing him to stop.

Though he has been in the Oval Office late two nights this week, the president has done little in the way of governing and has instead been working the phones, according to insiders.

He has called friendly governors – in red states like Arizona, Texas and Florida – and influential confidants in the conservative media, like Sean Hannity. 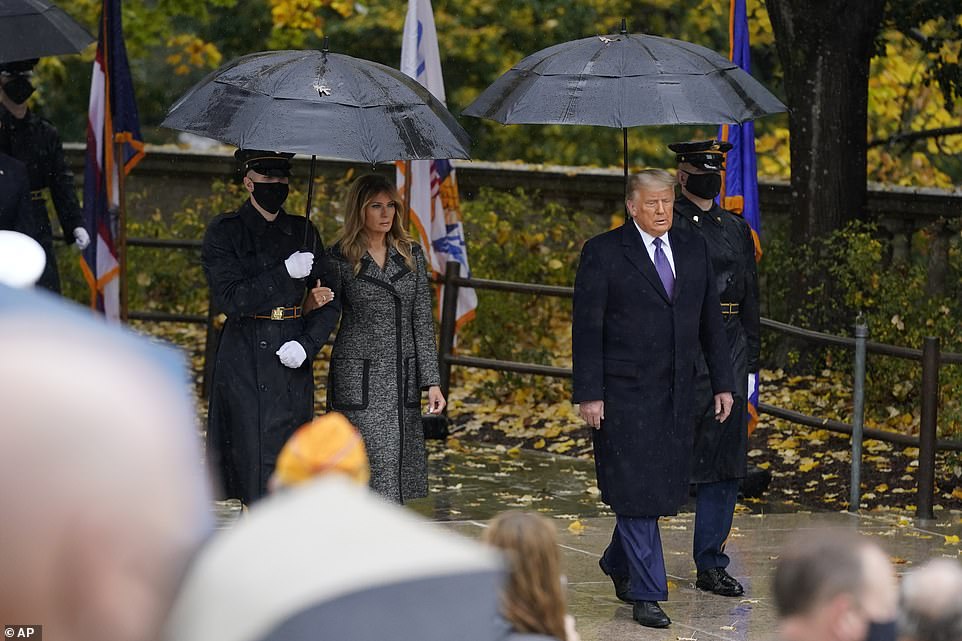 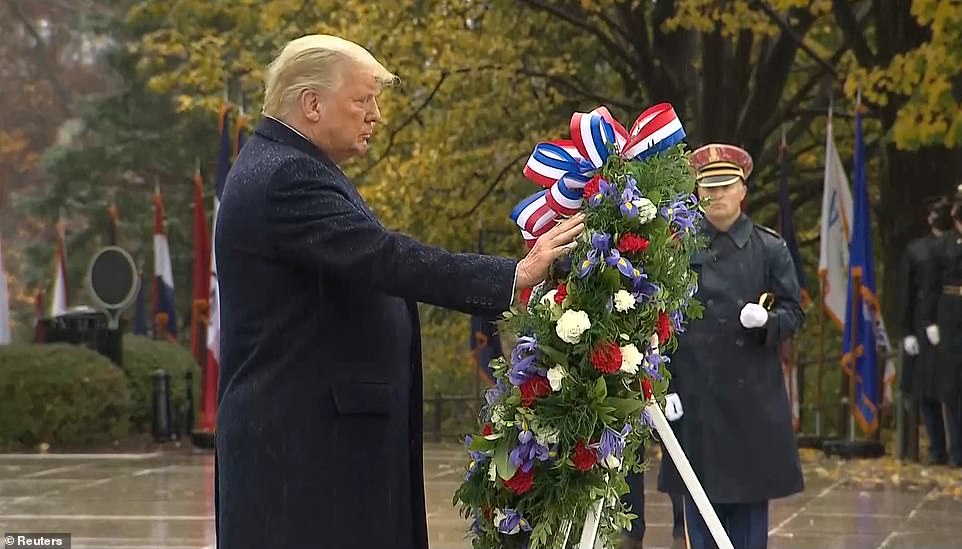 Trump laid a wreath at the Tomb of the Unknown Soldier to mark Veterans Day. He stayed for around 10 minutes and was uncharacteristically silent 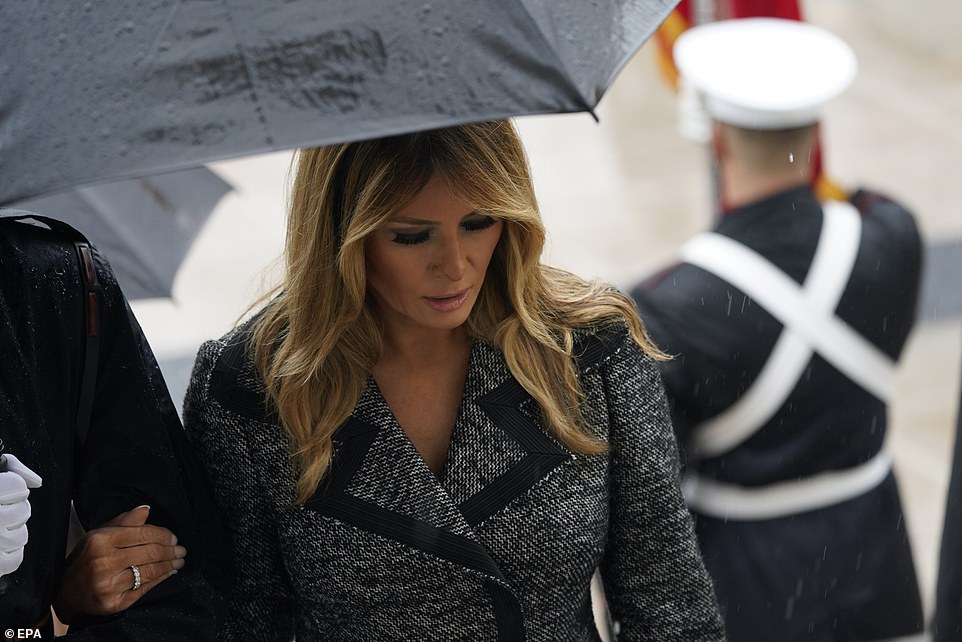 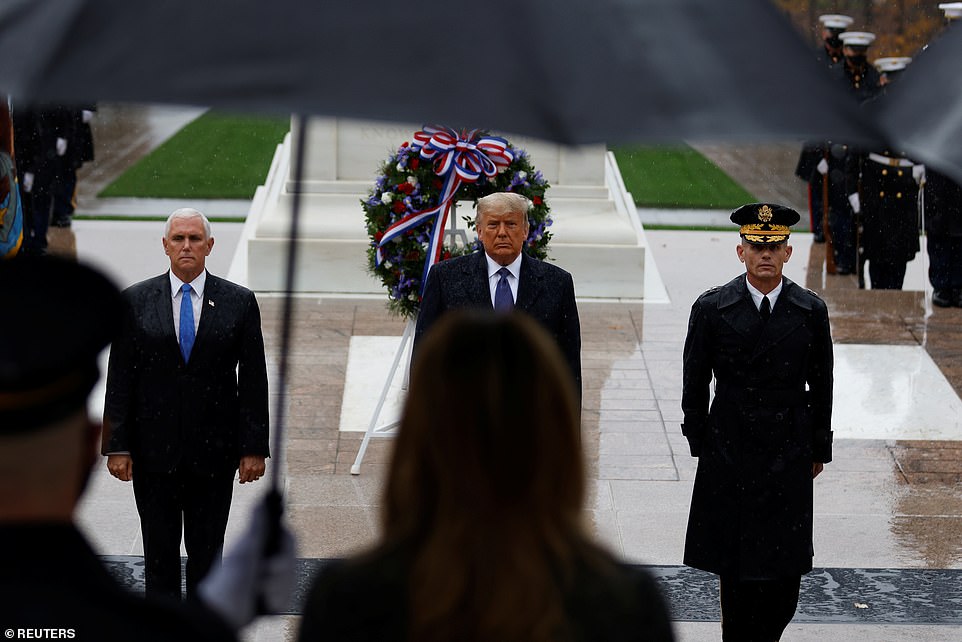 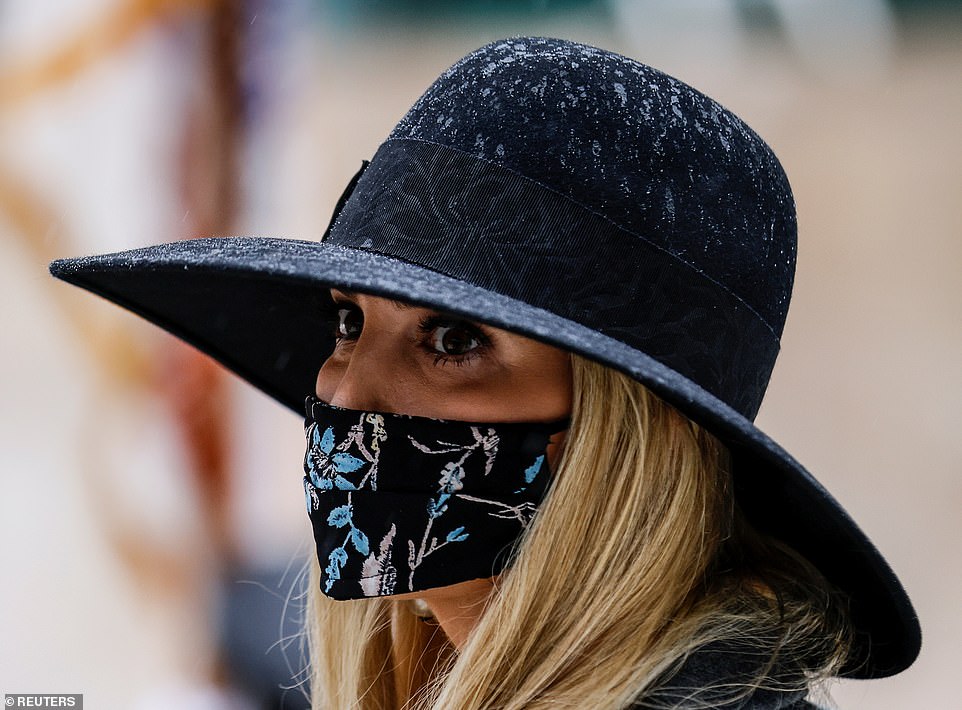 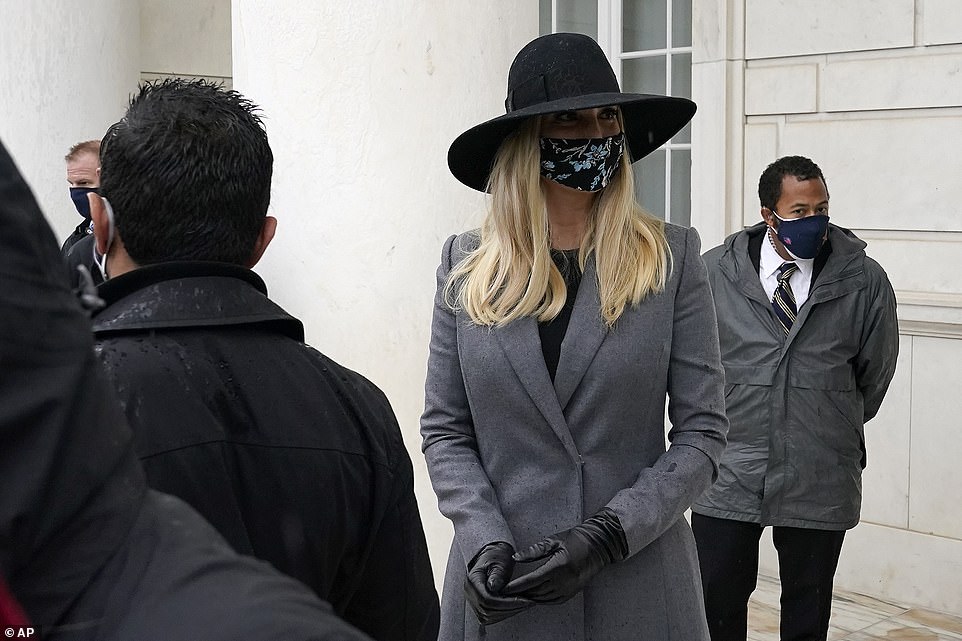 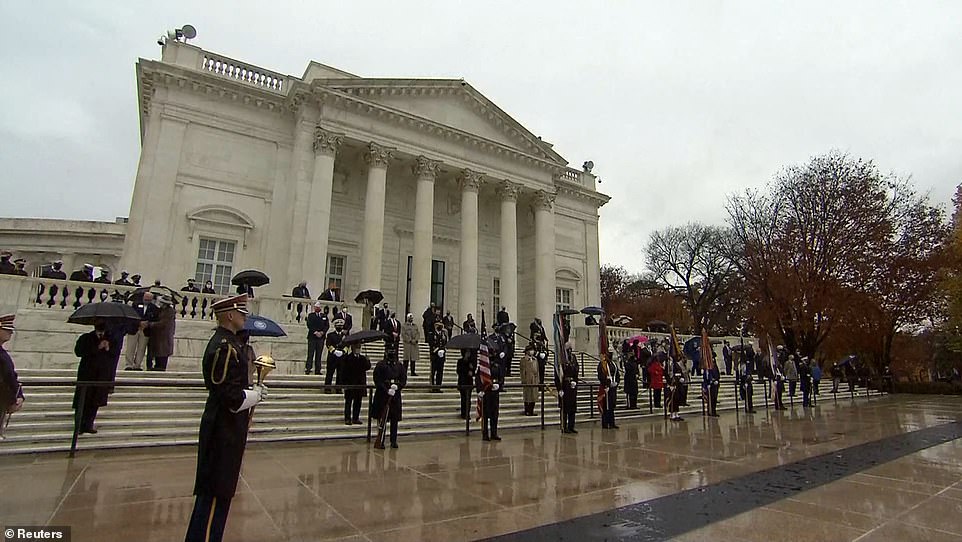 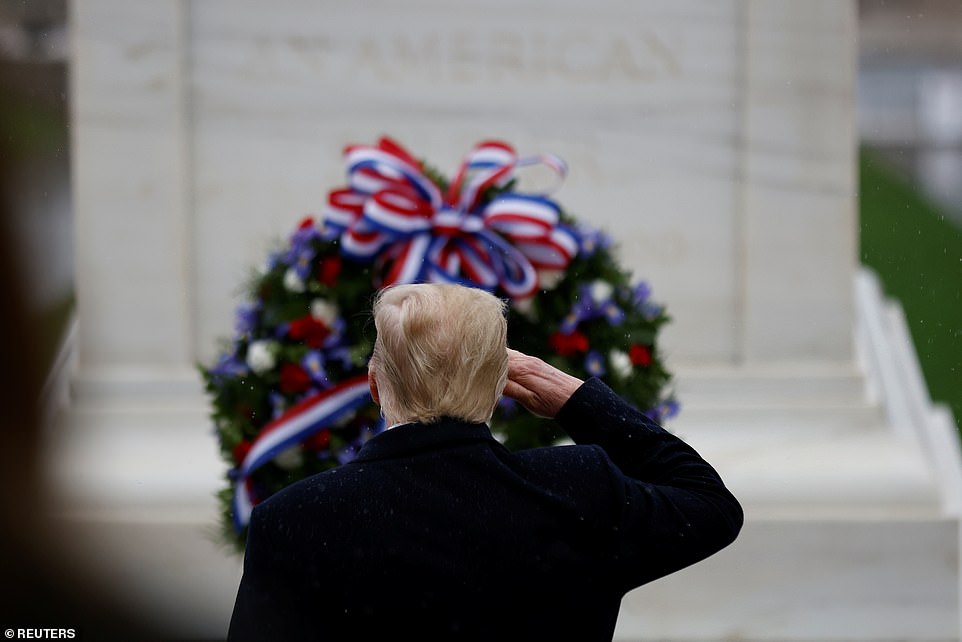 Trump saluted the Tomb of the Unknown Soldier. He has not been seen since the weekend – as major media outlets projected Joe Biden as the winner of the 2020 election 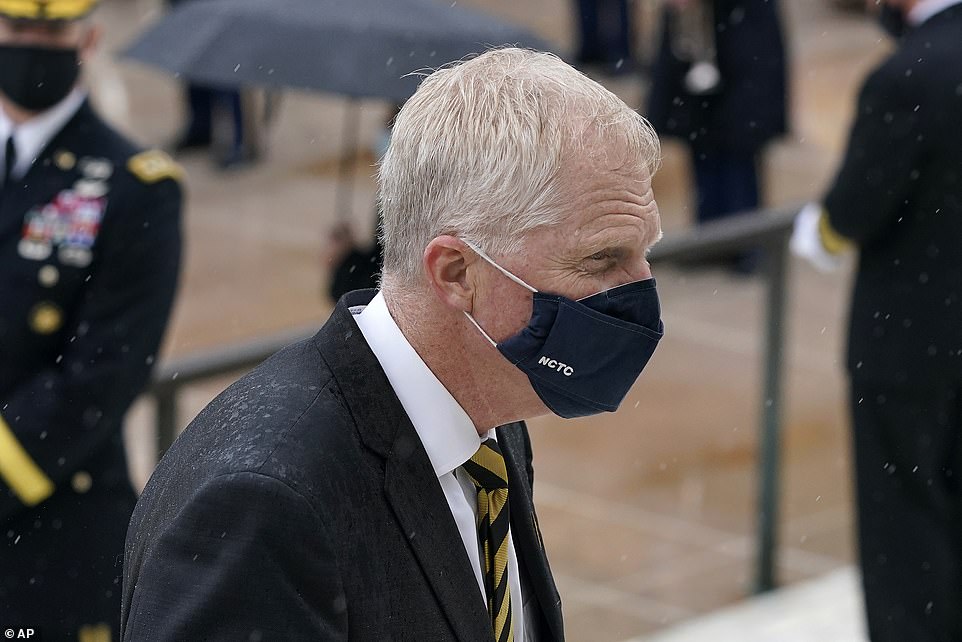 But he has not been as responsive to Republican lawmakers as before the election.

Always an obsessive cable news viewer, he has been watching even more TV than usual in recent weeks, often from his private dining room just off the Oval Office, the officials said.

Trump’s approach to two crucial Senate run-off elections in Georgia remains an open question: He has not yet signaled if he will campaign there, and aides have started to worry that the extended legal battle could sap support for the GOP candidates.

Trump has also begun talking about his own future upon leaving office.

He has mused about declaring he will run again in 2024,and aides believe that he will at least openly flirt with the idea to enhance his relevance and raise interest in whatever money-making efforts he pursues.

While he ponders his options, his involvement in the day-to-day governing of the nation has nearly stopped.

According to his schedule, he has not attended an intelligence briefing in weeks, and the White House has done little of late to manage the pandemic that has surged to record highs in many states.

The president’s resistance to acknowledging the outcome of the race has stalled the transition process. The head of the General Services Administration, a Trump appointee, has held off on certifying Biden as the winner of the election.

The certification – known as ascertainment – would free money for the transition and clear the way for Biden’s team to begin placing transition personnel at federal agencies.

White House spokesman Judd Deere said he was ‘not aware’ of any communications between the White House and the GSA administrator on ascertainment. 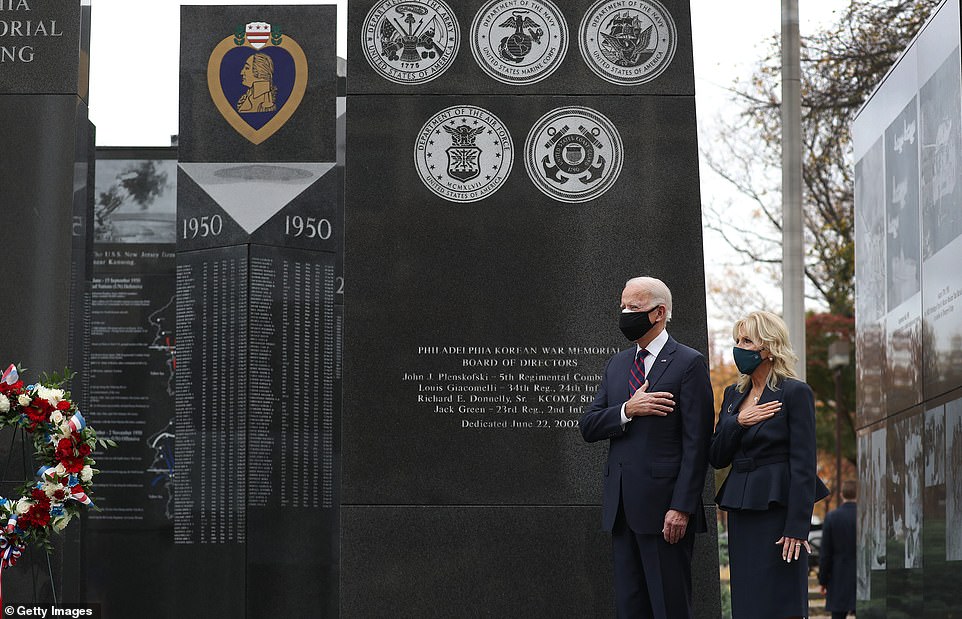 President-elect Joe Biden and his wife Jill also participated in a wreath laying to commemorate Veterans Day on Wednesday in Philadelphia, Pennsylvania 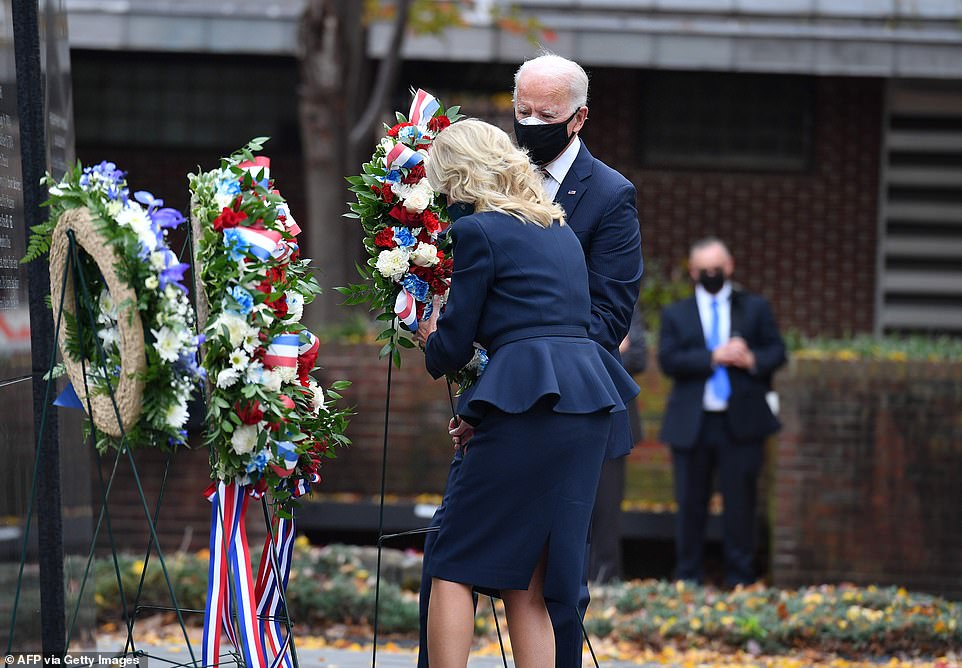 The Biden’s, who donned masks unliked the first couple, paid their respects at the Korean War Memorial at Penn’s Landing in Philadelphia 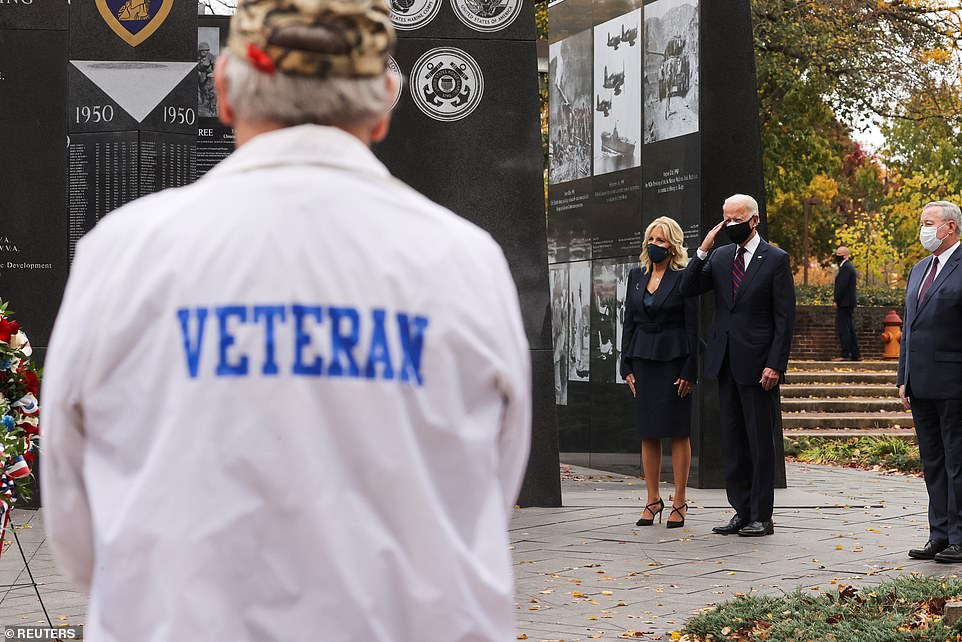 Biden on Tuesday played down the importance of the certification for now and said his team continues to prepare to take reins of the US government.

The president-elect also suggested he wasn’t overly concerned that he’s not yet receiving the President’s Daily Briefing – a highly classified intelligence analysis.

Denis McDonough, who served as White House chief of staff during the Obama administration and helped oversee the 2017 transition of power, said that even as Trump has tried to stymie the transition, significant progress still has been made.

The Biden transition team has published an ethics plan and the Trump administration earlier established a White House Transition Coordinating Council as required by law.

In stark contrast to Trump’s silence, Biden has been holding public events daily and has made several public statements since Saturday, when major media outlets projected him the winner of the presidential election.

Biden and his wife Jill participated in their own commemoration of Veterans Day by laying a wreath at the Korean War Memorial at Penn’s Landing in Philadelphia, Pennsylvania at the same time Trump held his event in Virginia on Wednesday.