Midterms on a knife edge: Nearly 6 in 10 Republican voters want Trump to run in 2024 while 54% of Democrats want Biden to step aside, new poll shows – as inflation remains top concern for Americans ahead of November vote

A new poll released on Sunday shows Donald Trump having more support from his base going into the 2024 election cycle than President Joe Biden does among Democrats.

It also suggests that inflation and the state of the economy remain top concerns for voters less than three months before the November midterms will decide which party controls Congress for the latter half of Biden’s term.

More than 50 percent on sides of the aisle also rated the other party as ‘too extreme’ in a sign of the continuously chilling political climate.

Voters on the left surveyed by USA Today and Ipsos still aren’t enthused about the 79-year-old commander-in-chief – despite a recent boost in his job approval numbers.

Trump, on the other hand, has seen a slight boost in support since the FBI’s raid on his Mar-a-Lago property in search of classified documents.

When just given the two options, 59 percent of Republican voters said they would support the ex-president for another term while 41 percent said ‘it’s time for a change within the Republican Party.’

Forty-four percent of Democrats asked the same about Biden said he ‘should be the Democratic nominee for president in 2024 and deserves re-election.’

That’s despite most left-wing voters expressing positive views about the president, with more than 8 in 10 calling him an experienced operator and believing he’s ‘focused on bringing the country together’ and ‘fighting for the people he represents.’ 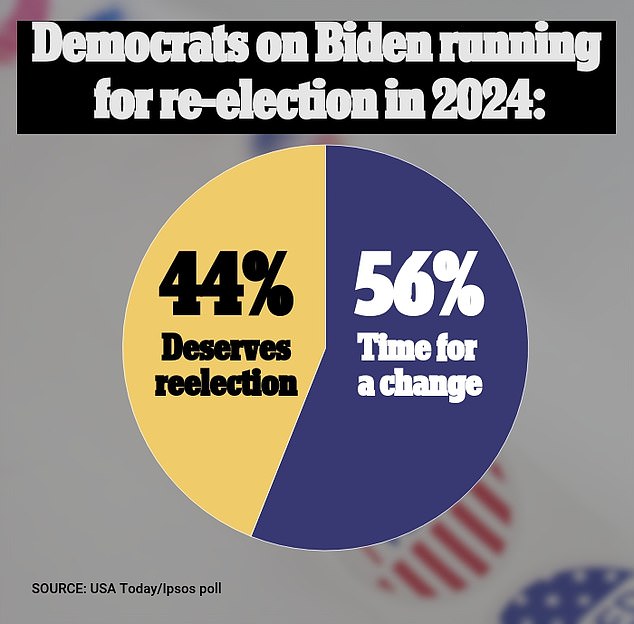 Ninety percent of Republicans said Trump ‘is willing to use all tools at his disposal to get things done.’

More than 85 percent also said he, like Biden, ‘fights for the people he represents’ and against ‘woke corporations and cancel culture.’

It comes as both Biden and his party are enjoying a new wave of support. Outrage over right-wing attacks on abortion rights has breathed new life into left-wing campaigns where they previously faced longer odds.

A CBS News poll also released on Sunday shows Biden’s support rising by three points, from 43 percent in July to 45 percent now. His disapproval rating fell by the same margin – but he remains underwater with 55 percent.

But just 11 percent of respondents to the Ipsos survey said abortion rights were the main issue for the country right now.

A plurality of voters – 46 percent – said ‘inflation or increasing costs’ were their top concern.

Rising gun violence was a distant second with just over a quarter of respondents calling it the main issue.

Inflation rose by 8.5 percent in July, according to the most recently available data. That’s a slight drop-off from 9.1 percent in June but remains in a range not seen since the 1980s. 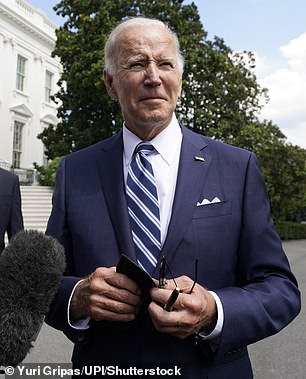 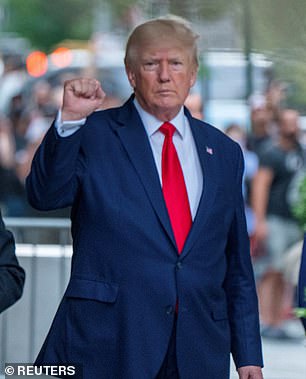 Democrats saw some political relief in recent weeks when gas prices began easing from their all-time high average of $5 per gallon.

At roughly $3.85 today, the national average cost is still about 70 cents more than this time last year.

Trump has likewise seen his support rise in the wake of the FBI’s unannounced search of Mar-a-Lago earlier this month.

Even Republicans who were skeptical of Trump have coalesced to demand transparency at least, and accountability at most, from Justice Department officials who approved the unprecedented operation.

A New York Times poll of GOP voters from early July found that just 49 percent wanted the ex-president to mount a third campaign.

The first survey taken after the raid, released by Morning Consult, saw Trump’s 2024 support shoot up to 58 percent.

That same poll had him at 54 percent support in July.

Trump lashed out against conclusions that his poll numbers benefited from the raid in a statement on his Truth Social app last week. The ex-president took aim at comedian Bill Maher specifically, who discussed Trump’s boost in support on his show.

‘He said I was fortunate to have my home broken into because it was good for my polls. Wrong, it was an assault on liberty, and very bad for our Country, which is incredibly angry right now…And no, I was, and am, leading everybody in the POLLS – BY A LOT!!!’ the former president wrote.