Donald Trump was talked out of announcing his 2024 presidential bid during a campaign rally in Pennsylvania for Senate candidate Dr. Oz, a report suggests.

NBC News claims the former president was told to stand down by advisors on announcing his White House intentions during the rally where he attacked Florida Governor Ron DeSantis, by calling him ‘DeSanctimonious’ and bragged that he is beating him in the polls.

His inner circle said it could distract from the Republican bid to take the House and Senate in Tuesday’s midterms.

But a source told the outlet that he is ‘itching’ to reveal his bid for a second term in office. DailyMail.com has reached out to a Trump spokesman for comment.

Conservatives including Mike Pompeo have criticized Trump for his tirade at DeSantis with just two days before millions of Americans head to the polls.

Donald Trump was talked out of announcing his 2024 presidential bid during a campaign rally in Pennsylvania for Senate candidate Dr. Oz, a report suggests 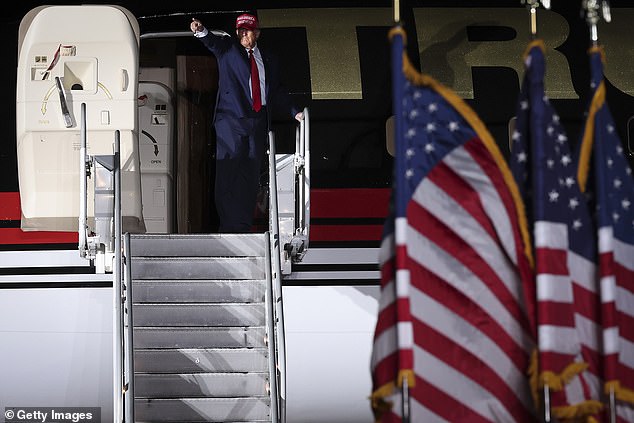 Donald Trump steps off of ‘Trump Force One’ to address supporters in Latrobe, Pennsylvania, for a campaign rally ahead of the midterms

Rod Dreher, a senior editor at The American Conservative called Trump an ‘idiot’ for the attack.

‘DeSantis is a far more effective leader of the Right than Trump was, if, that is, you expect a leader to get a lot done, rather than just talking about it and owning the libs.’

Guy Benson, an editor at Town Hall added: ‘When Desantis wins huge on Tuesday, it will be despite Trump — not because of him, as Trump will try to claim. Despite his instinctive, childish pettiness, he’s doing Ron quite a favor.’

Axios reported last week that Trump is planning on announcing his campaign on November 14.

Doing so too early means donations and campaign finances are restricted by election laws.

Trump did the crowd on Saturday night: I don’t want to do that right now because I’d like to do it … I want to have the focus tonight be on Dr. Oz, and Doug Mastriano. Because we have to win, alright?’

Republicans are expected to make gains on Tuesday night, but the margin could determine Trump’s decision.

Popular Republican governor DeSantis has resisted taking public shots at Trump, perhaps aware of how intertwined their bases are, but has not ruled out the possibility of challenging him in 2024.

His reluctance to do so has rankled Trump, who has widely taken credit for DeSantis’ rise to political stardom from being just another House Republican to winning a close race for the Tallahassee governor’s mansion in 2018.

But more recently, DeSantis made a national name for himself with his vocal criticism of the Biden administration’s COVID-19 precautions and other attacks, as well as legislation targeting LGBTQ youth. 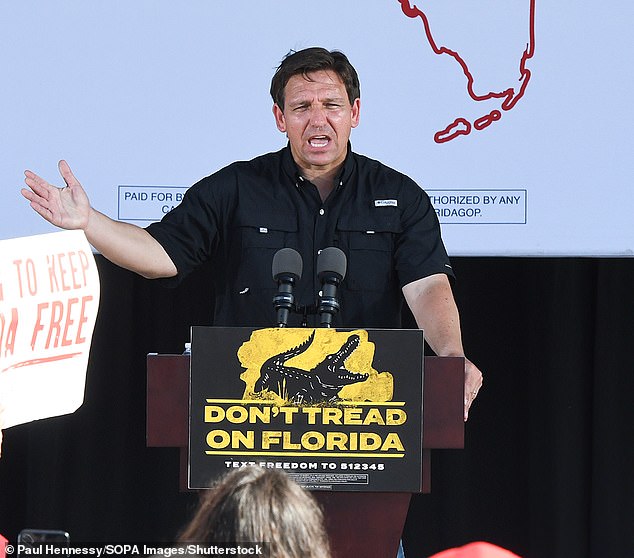 While Trump appears in Miami, DeSantis will speak at three rallies closer to Tampa on Sunday 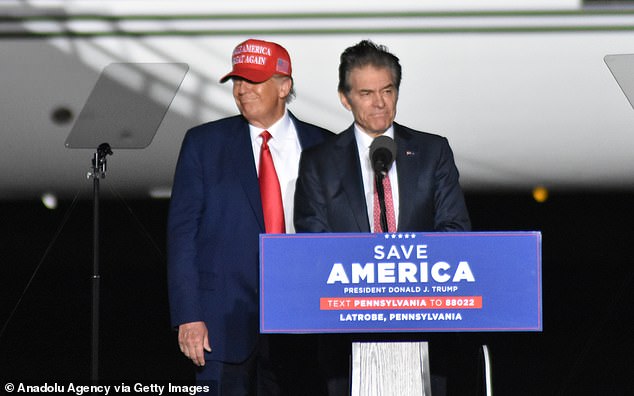 Trump stands behind Senate candidate Dr. Oz, who is in a tight race for the Senate in Pennsylvania with Democrat John Fetterman

The vast majority of early 2024 GOP voter polls have put DeSantis right behind Trump in terms of who Republicans want as their next presidential nominee.

Trump has not yet formally declared his intent to run but he’s dropped several hints making it clear where he leans.

‘We’re winning big, big, big in the Republican Party for the nomination like nobody’s ever seen before,’ the former president said on Saturday night.

He asked for poll numbers to be put up on the screen above him.

‘There it is, Trump at 71, Ron DeSanctimonious at 10 percent,’ Trump said derisively.

Surprisingly, among the first high profile Republicans to rush to DeSantis’ defense was Mike Pompeo – Trump’s former secretary of state and a potential 2024 contender himself.

‘Not tired of winning. [Governor Ron DeSantis] you’ve proven conservative policies work. Florida is better for it. Vote for [DeSantis].’

Trump’s inner circle has been eyeing November 14 as the expected date for him to announce a third bid for the White House, Axios reported last week.

DeSantis, meanwhile, is making the closing arguments for his own re-election bid.

He’s running for a second gubernatorial term against Charlie Crist, a House Democrat who previously governed Florida from Tallahassee as a Republican.

Despite staying mum on his presidential ambitions, DeSantis has amassed a massive $200 million war chest for his 2022 re-election bid – an eye-popping sum for a gubernatorial candidate.

His Sunday rallies are part of his ‘Don’t Tread on Florida’ tour.

It’s seeing him go to Lee, Hillsborough and Sarasota counties to gin up voter support today.