President Donald Trump compared some U.S. cities to Afghanistan as he blasted protesters attempting to pull down statues as ‘troublemakers’ and ‘anarchists’.

Speaking in a Fox News interview with Sean Hannity on Thursday night, the president claimed that living in cites like Chicago, Detroit, Oakland and Baltimore was ‘like living in hell’ as he called for stop and frisk tactics to be used to cut down crime.

‘It’s not a racist statement,’ Trump said. ‘Black people come up to me and say “thank you”. They want help.’

Trump placed the blame with ‘Democrat-run’ cities where protests against racial injustice are ongoing, saying they ‘don’t love our country’ and are ‘taking over’. 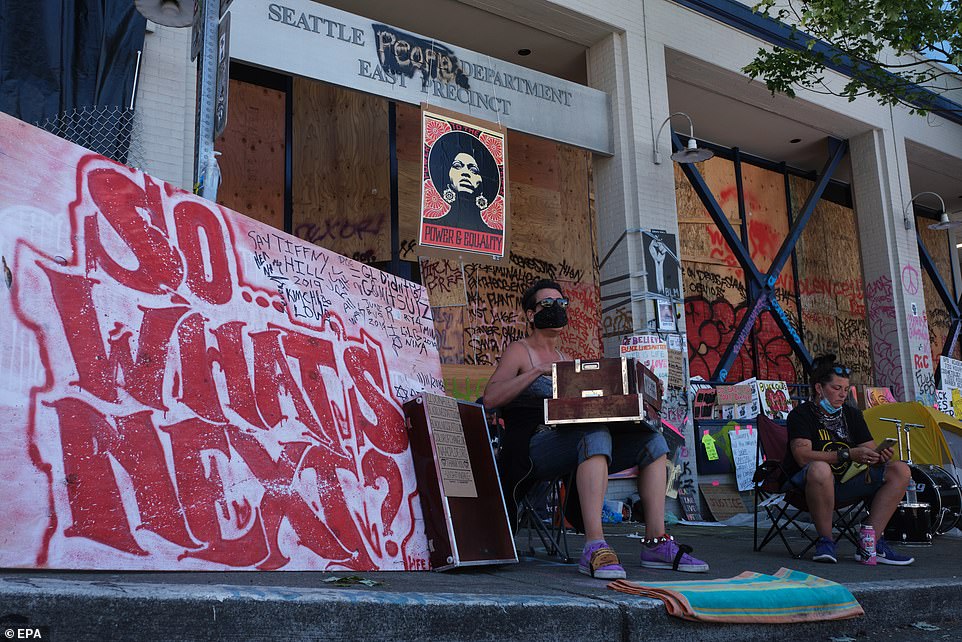 Trump took part in the town hall with Fox News in Green Bay, Wisconsin, where he was visiting Fincantieri Marinette Marine, a Marinette shipyard, to announce a new contract with the military that he says could create up to 6,000 jobs in the area.

The president spoke at length about his response to the coronavirus and Black Lives Matter protests as well as discussing John Bolton, Roger Stone and his own run ins with the press.

On the topic of the recent civil unrest sparked by the death of George Floyd in police custody in Minneapolis on May 25, Trump threatened to intervene in Seattle if authorities did not work to dismantle the autonomous protest zone that has been established there.

‘Because what’s happening, they’re taking over American cities. In all cases, its Democrats. They’re Democrat-run, in all cases.’

During Hannity’s show, the president was heard twice stating that demonstrators who try to topple statues to due tear them down should be hit with a jail sentence of up to ten years, claiming that more than 100 people have been arrested so far.

‘If they want to knock down a statue, they get ten years,’ he stated, citing the Monuments Act.

He threats came after police clashed with protesters in Washington D.C. Monday night as a demonstration attempted to tear down a statue of President Andrew Jackson close to the White House.

Another group of protesters had vowed to bring down a statue of Abraham Lincoln known as the Emancipation Memorial on Thursday night. 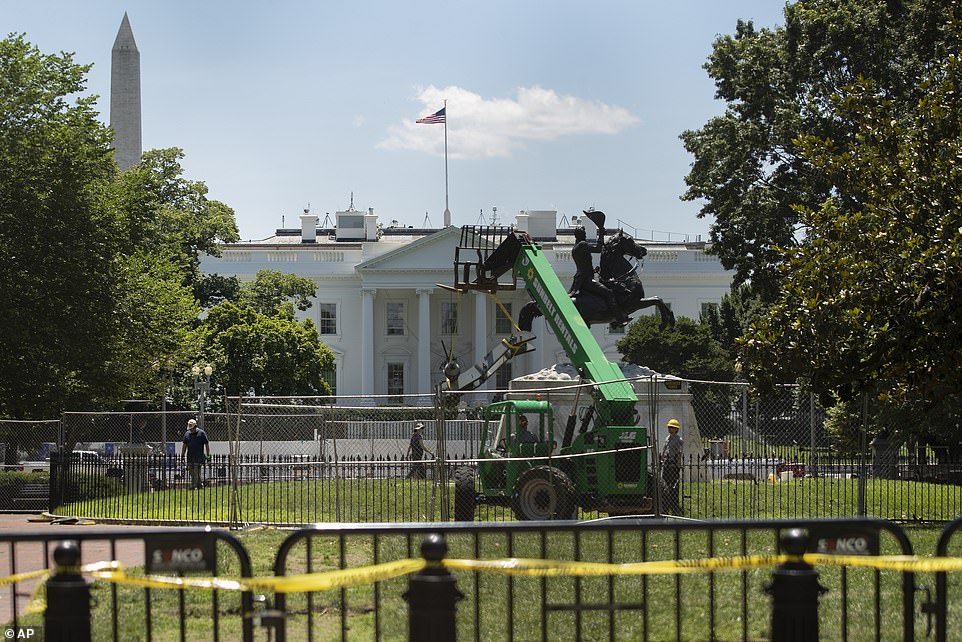 Workers remove part of the cannon at the base of the equestrian statue of President Andrew Jackson in Lafayette Square Park in front of the White House on Wednesday. Trump criticized the protesters who had attempted to take down the statue

‘Andrew Jackson was  a very good President, a very good general,’ Trump said of the attempts to topple the statue Monday.

‘ And Lincoln and that’s the emancipation proclamation. I think they have someone who wasn’t freed getting up and being freed by Lincoln.  I can see controversy but there’s also beauty there … it was paid for by slaves.’

Trump said that he was open to taking things down ‘but they ought to go through a process legally’.

‘These are rioters and a lot of bad people involve. They’d like to get [to statues of] Jesus,’ he added.

‘These have nothing to do with any event but they are troublemaker and anarchists and they want to upset our country.’

‘Joe Biden would have that be the whole country,’ Trump added of Seattle’s autonomius zone and the toppling of status in other cities around the country.

‘It’s so crazy what is happening. Here’s a guy that doesn’t talk. Nobody hears him. When he talks, he can’t put two sentences together. I don’t want to be nice or un-nice, OK? But I mean, the man can’t speak,’ Trump said.

In a tour of a Wisconsin factory also filmed with Hannity on Thursday, Trump was asked about an inaccurate statement made by Biden earlier in the day in which he claimed more than 120million have died from coronavirus in the United States.

‘That’s a third of our population,’ Trump said of the error.

‘This is serious business. We can’t have something like that, that’s a serious error

‘That’s not a slip up, it’s a serious error. That’s not a permissible type of error because there’s something going on.

‘We’re talking about the presidency of the United States.’

During the prerecorded interview, Trump also hits out at John Bolton ahead of his publication of his tell-all memoir ‘The Room Where It Happened’.

‘He didn’t do a good job,’ Trump said of Bolton.

‘He’s the only man I think I ever met – I knew him for a year – I don’t think I ever saw him smile once. I said to him, “John, do you ever smile?” And it tells you something about somebody,’ the president added.

Trump reiterated claims that mail-in voting could lead to voter fraud if it is allowed on-mass for the November election.

The president claimed that an absentee ballot, which he casts himself, is different but that mail-in voting left the election open to interference from China, in particular.