Armed Trump supporters wielding assault rifles and crucifixes protested across America over the weekend in growing support for the President’s claim the election was stolen.

Hundreds rallied with their MAGA flags in downtown Phoenix on Saturday, claiming that Joe Biden had conspired with the media to seize the White House.

The Trump campaign lent support to protests questioning the current vote tally, filing a lawsuit in Arizona Saturday over rejected ballots that Arizona’s Secretary of State said was ‘grasping at straws.’

It comes as Donald Trump saddles up for a series of ‘campaign-style’ rallies at which he will show obituaries of people who were registered to vote fraudulently.

A supporter of U.S. President Donald Trump carries a semi-automatic rifle as he takes part in a ‘Stop the Steal’ protest in front of the Maricopa County Elections Department in Phoenix, Arizona, on Sunday 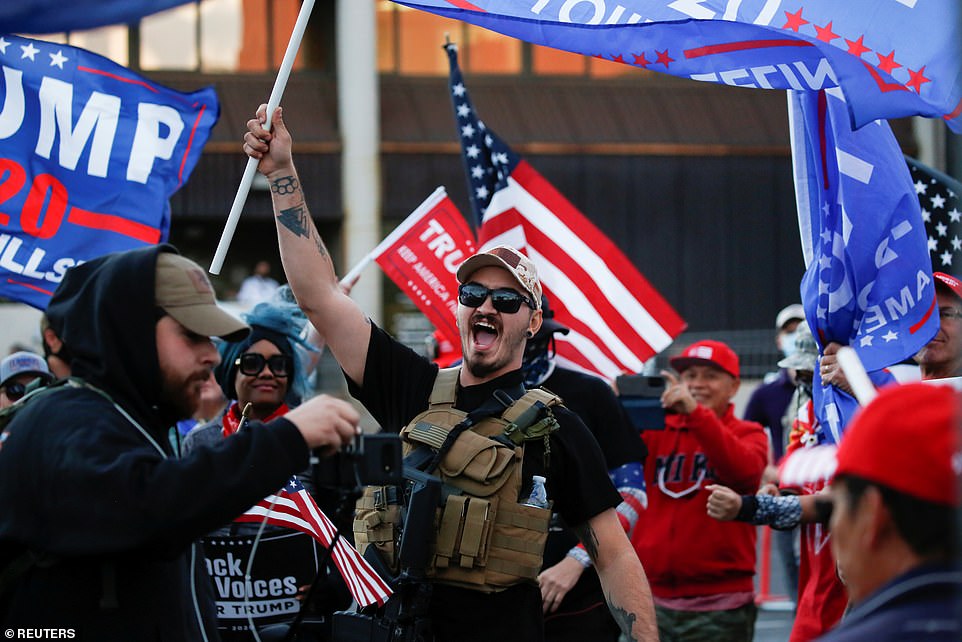 Trump supporters in Phoenix on Sunday as they chanted: ‘Stop the Steal’ 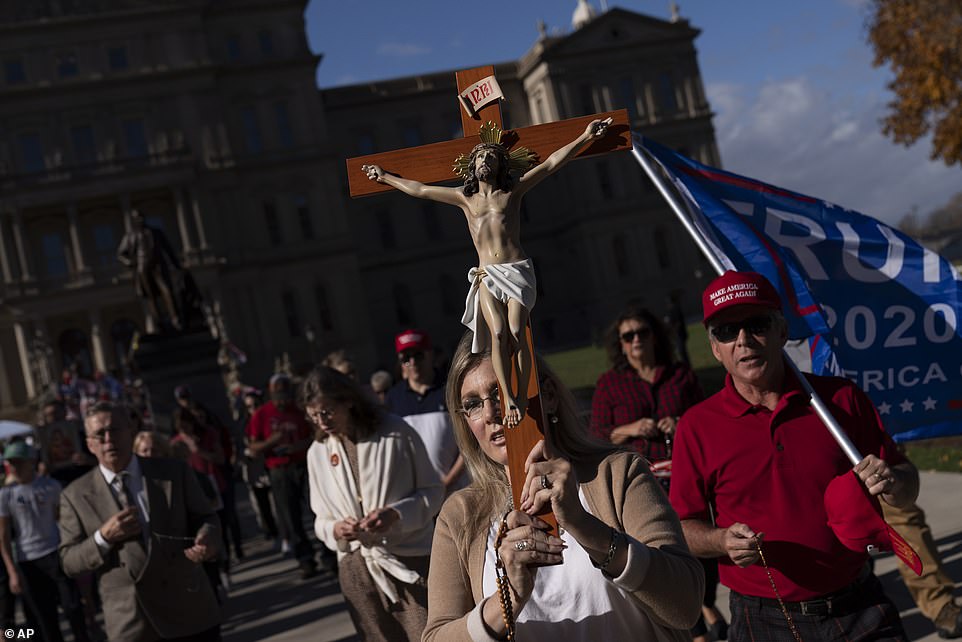 Worshippers pray during a protest with Trump supporters demonstrating against the presidential election results at the State Capitol in Lansing, Michican on Sunday

The president has made it clear that he does not intend to concede, despite analysts who say that there is too much ground to make up, irrespective of the alleged fraud.

One focus of the Trump supporters has been the Maricopa County Elections Department and the Arizona State Capitol, where they have been assembled for days, many of them armed.

They have chanted, ‘Count the legal votes! We are watching you!’ outside the building where election workers continue to count votes.

In Michigan, Trump fans clashed violently with Biden supporters who showed up to counter-protest.

In footage shared on social media, a group of men, some wearing Trump t-shirts and some holding Biden-Harris campaign flags, were seen brawling on the street, forcing bystanders to step in to break up the fight.

In Atlanta, outside the state Capitol in the longtime Republican stronghold of Georgia, chants of ‘Lock him up!’ rang out among an estimated 1,000 Trump supporters. Others chanted, ‘This isn’t over! This isn’t over!’ and ‘Fake news!’

No immediate violence was reported, though at one point, police moved to separate Trump opponents from supporters. 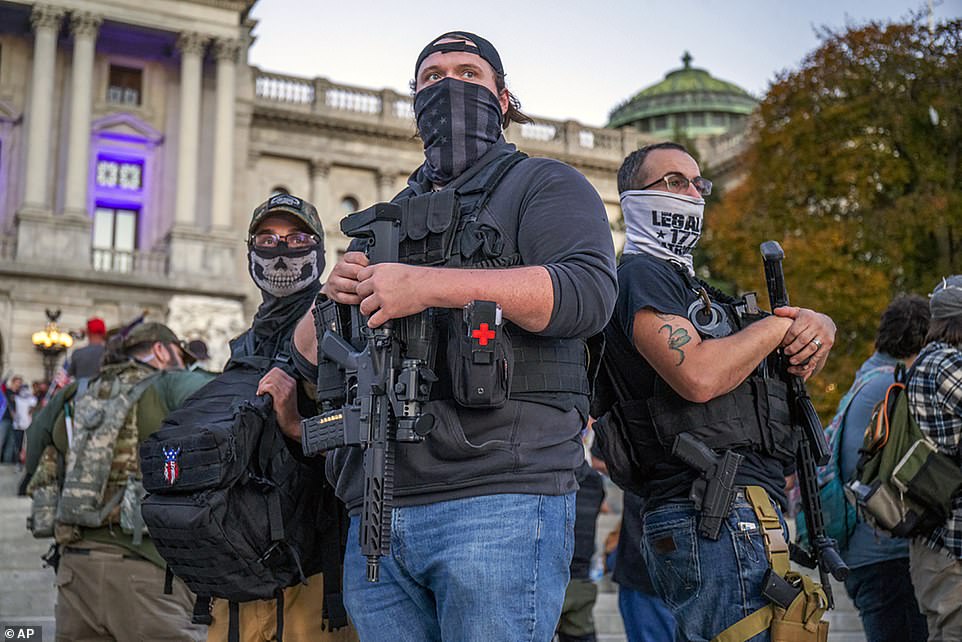 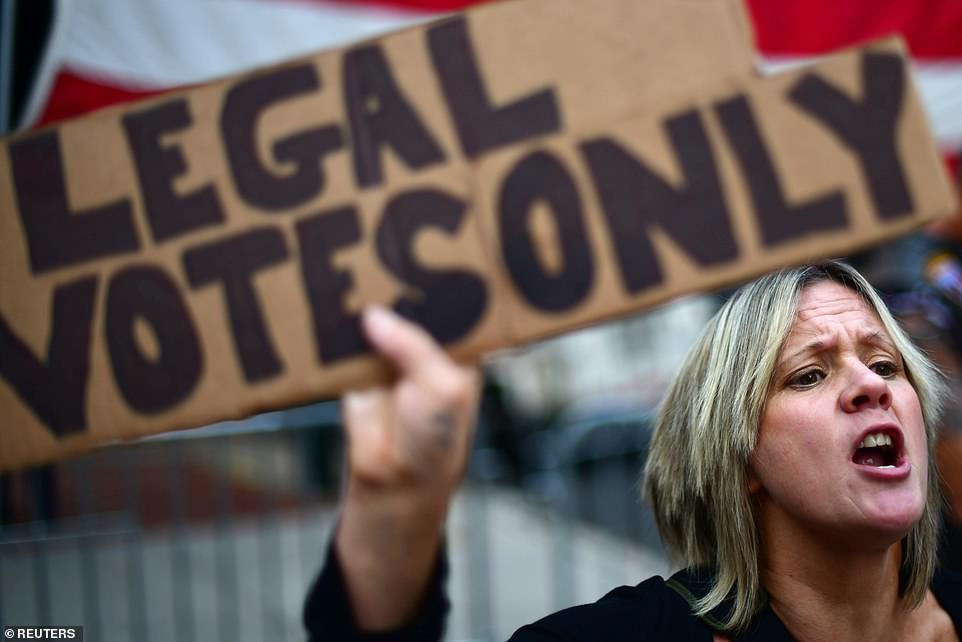 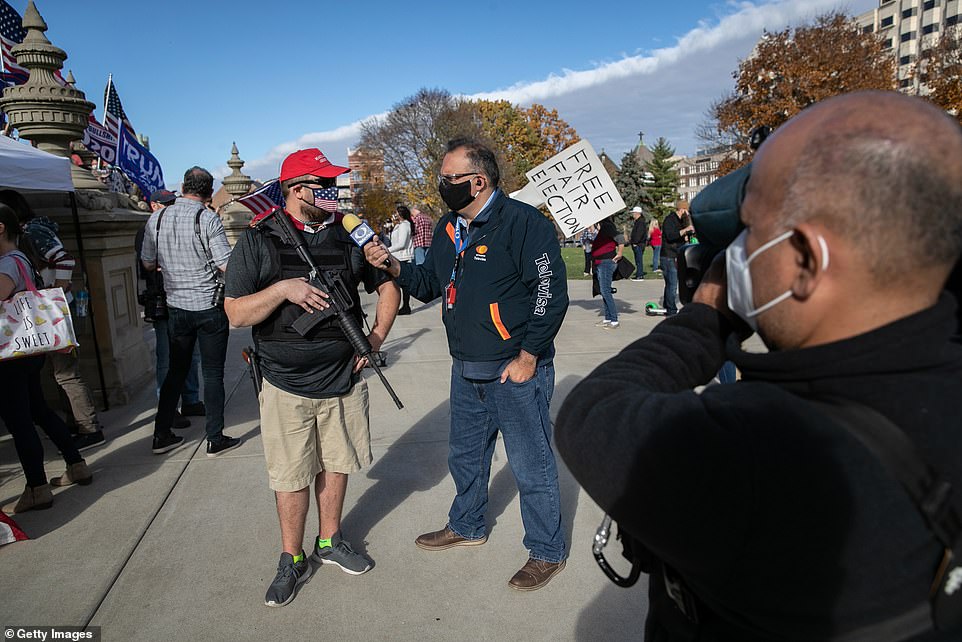 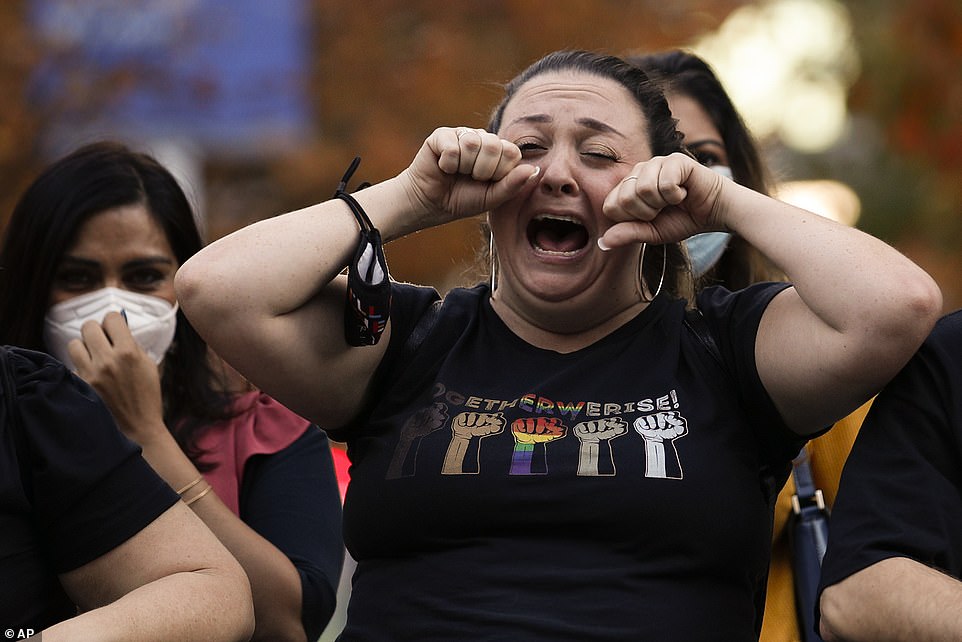 A supporter of President-elect Joe Biden pretends to cry as she taunts supporters of President Donald Trump protesting outside the Pennsylvania Convention Center in Philadelphia, Sunday 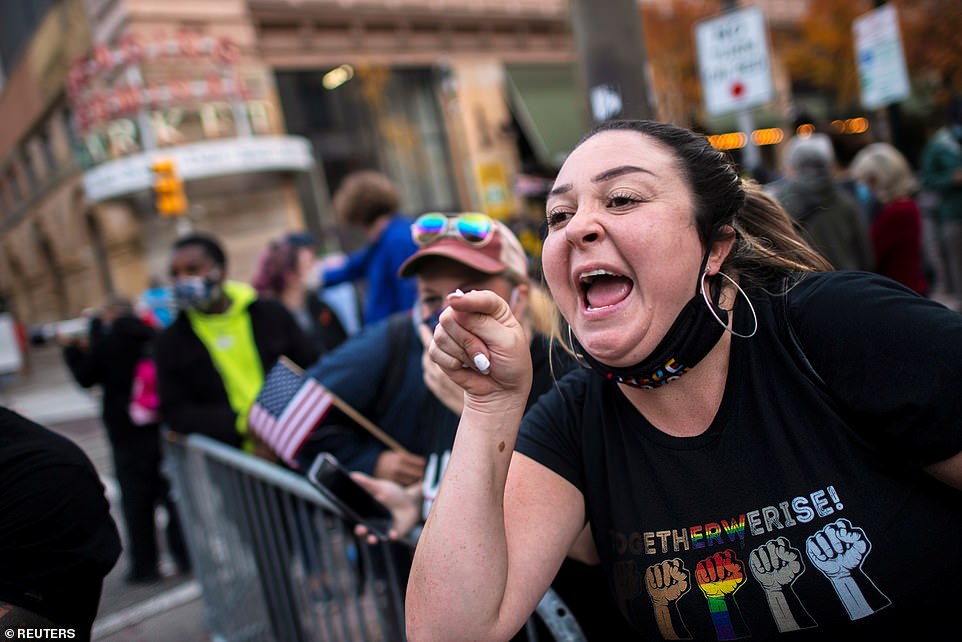 Renee Roberts, a supporter of President-elect Joe Biden, shouts towards supporters of U.S. President Donald Trump across the street, the day after a presidential election victory was called for Biden, in Philadelphia, Pennsylvania 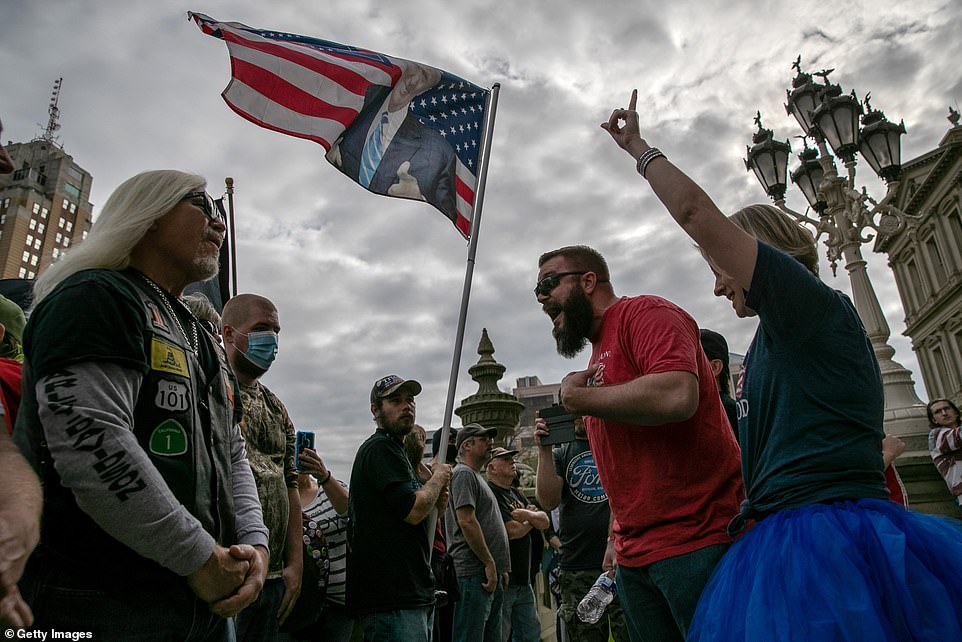 In Phoenix on Saturday, protesters at one point threatened to take down the fence cordoning off the elections department and some media members from the group.

At the state capitol building Saturday afternoon, speakers exhorted the crowd not to accept the results of the election, calling on paralegals and law students to come the president’s defense.

‘We all know President Trump won this election!’ one shouted. Another told the crowd to look in the mirror and ask themselves what they were willing to do. Chants of ‘liberty or death!’ rang out.

A number of far-right and militia groups such as the Proud Boys and Three Percenters were also in the crowd on Saturday, many armed with semi-automatic weapons.

Protesters at one point clashed with a small group of young counter-protesters waving Mexican and U.S. flags on a corner across from the elections department. 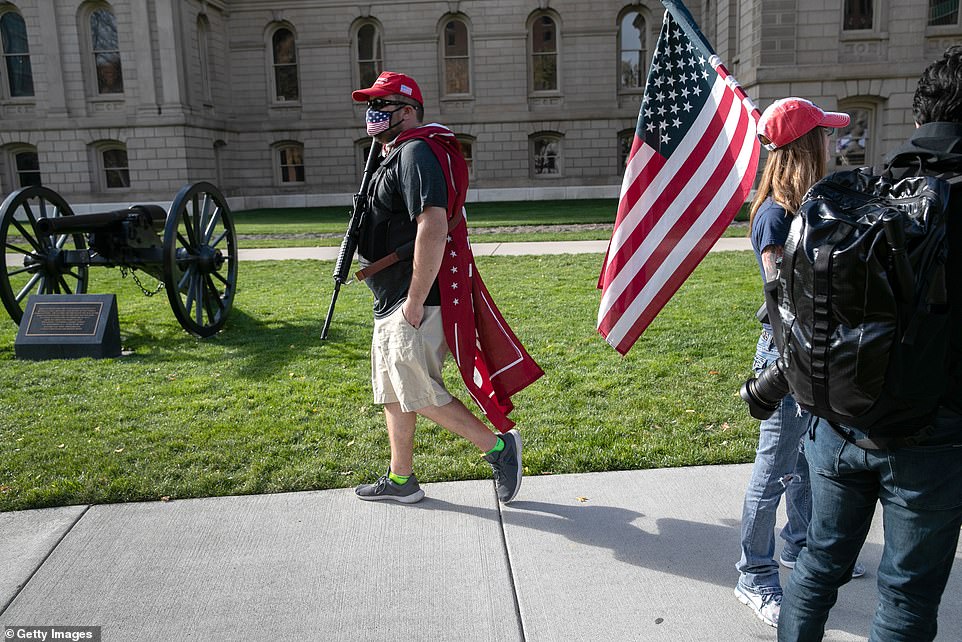 An armed Trump supporter walks through a demonstration at the Michigan state capitol on Sunday in Lansing, Michigan 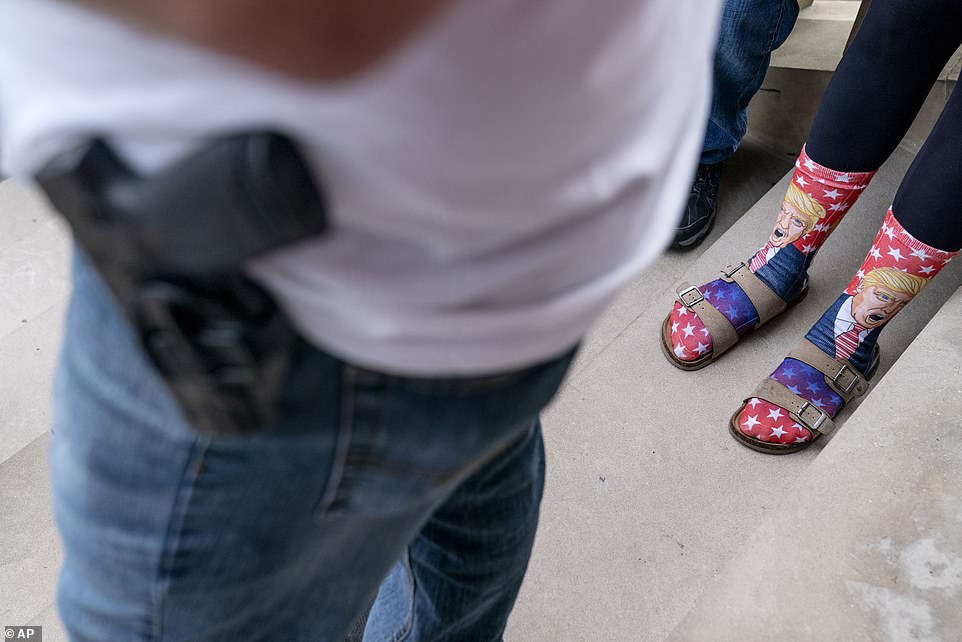 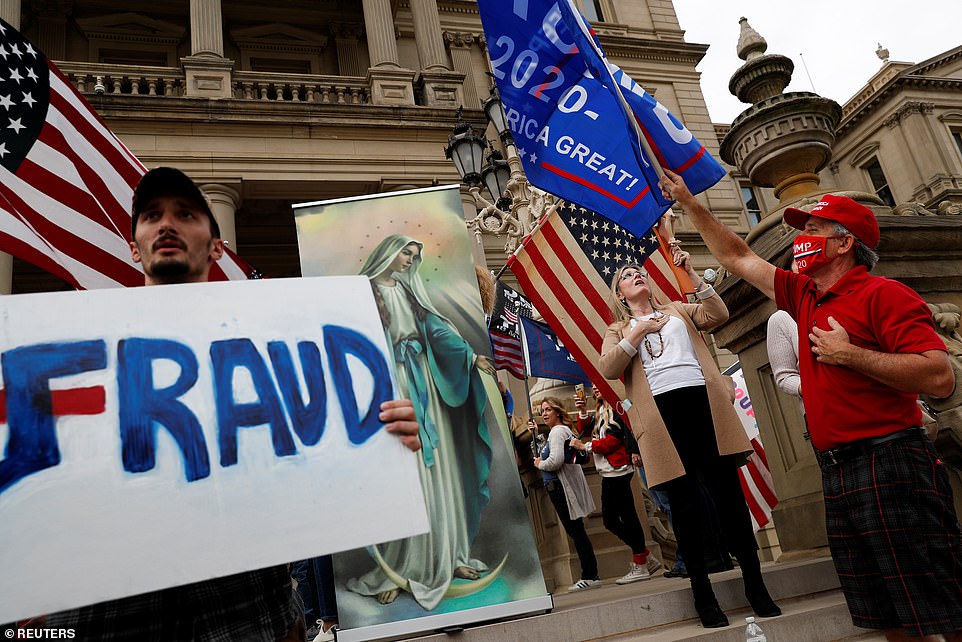 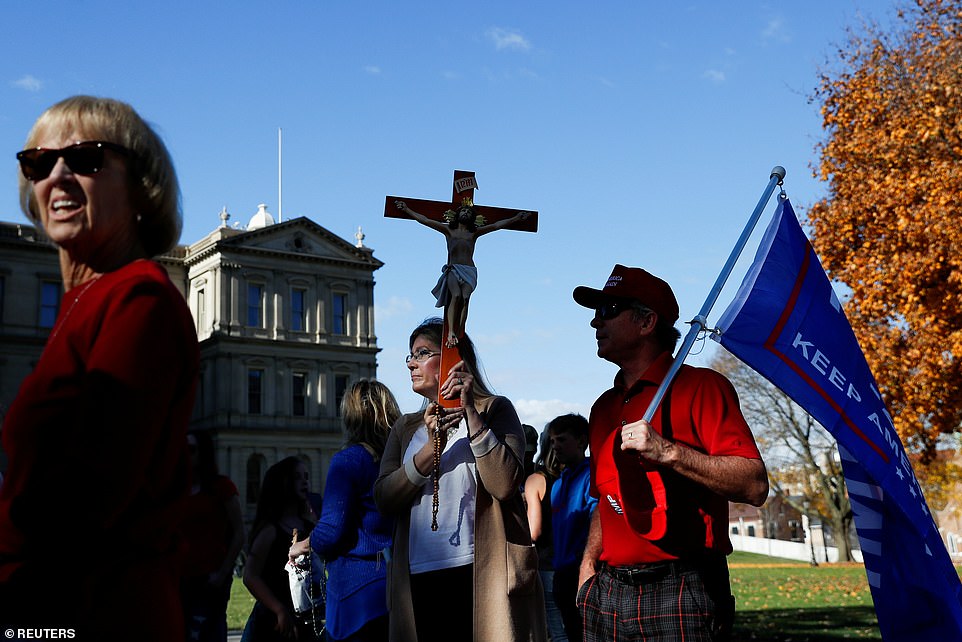 Jacki Valencia, 19, danced with a Biden-Harris sign as an unmasked man who had flown a ‘Blue Lives Matter’ flag shouted ‘USA!’ at her and others.

‘I think it’s ridiculous they’ve gathered here,’ she said. ‘They have no evidence there was fraud.’

The lawsuit, filed in state Superior Court in Maricopa County, said poll workers told some voters to press a button after a machine had detected an ‘overvote.’ 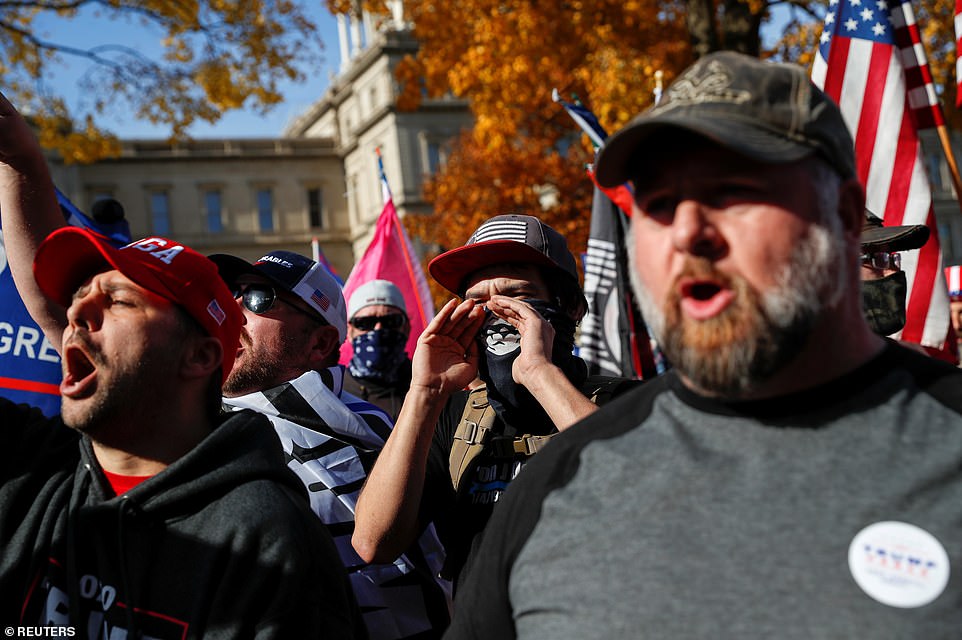 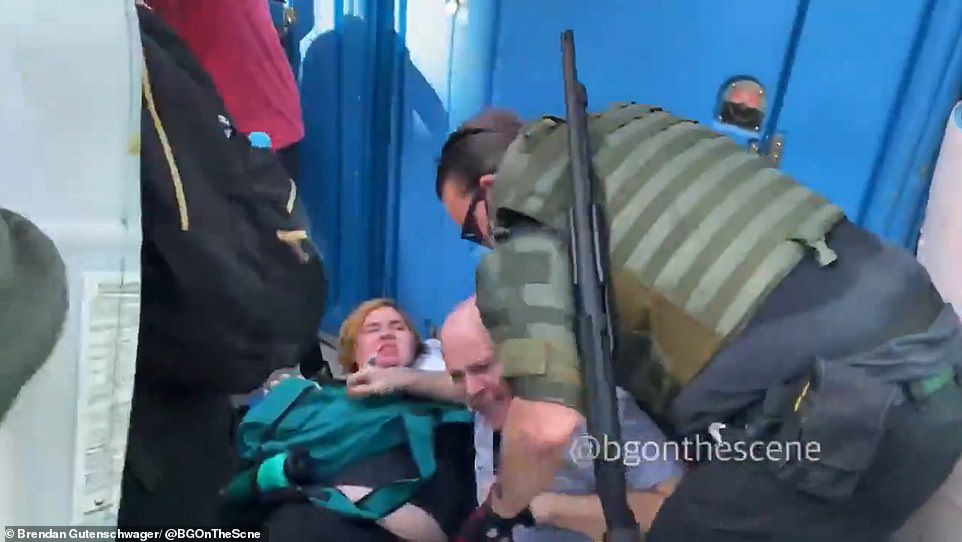 LANSING: Emotions ran high among Democrats and Republicans on Saturday after Joe Biden was finally named the next president of the United States. Pictured: Bystanders intervene in a fight between Trump and Biden fans 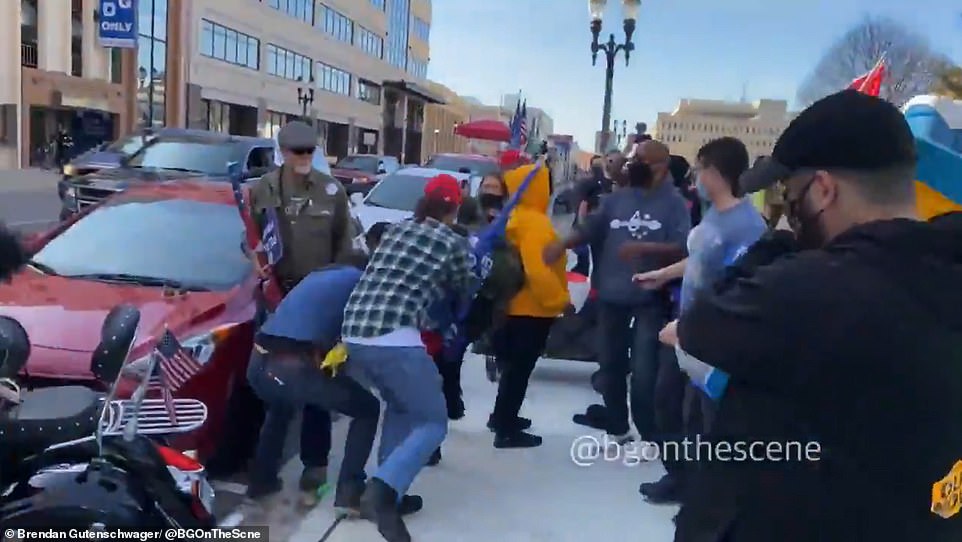 LANSING: Video shared on social media showed a brawl between Trump and Biden supporters during a rally in Lansing, Michigan

The Trump campaign’s lawsuit contends that potentially ‘determinative’ votes in the race between Trump and Democrat Joe Biden, who was declared the winner on Saturday by major television networks, were not counted.

An Arizona official rejected the lawsuit. ‘This is just a stalling tactic to delay the official canvass,’ Arizona Secretary of State Katie Hobbs said in a statement through her spokeswoman. ‘They are grasping at straws.’

The Trump lawsuit, whose plaintiffs include the Arizona State Republican party and the Republican National Committee, cited declarations by some poll observers and two voters that claimed the problem led to rejected votes. 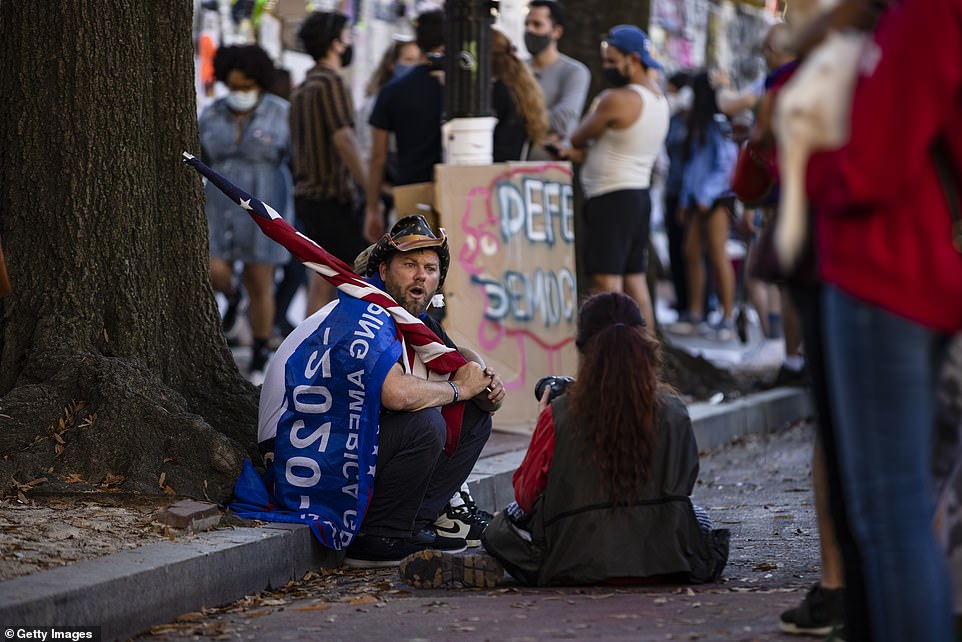 It seeks an order requiring a manual review of purportedly overvoted ballots that were cast in-person. It also asks a judge to bar the certification of the vote until the review is complete.

On Saturday, a group of voters dropped a lawsuit that had made unsubstantiated claims alleging some votes cast for Trump were not counted in Maricopa County because voters used Sharpie pens.

The county last year rolled out new tabulation equipment that made Sharpie pens the best option on Election Day because they have the fastest-drying ink.

Hobbs’ spokeswoman added that they ‘are reviewing (the latest lawsuit) now, but it appears to be a repackaging of the ‘Sharpiegate’ lawsuit. Hopefully, this puts the matter to rest for good.’