In a briefing that stretched an hour and 31 minutes Sunday, President Trump furiously defended his response to combating the coronavirus, showing clips of New York Gov. Andrew Cuomo praising him and yelling at reporters who questioned his record.

‘What I’m doing is I’m standing up for the men and women that have done such an incredible job,’ he said when a CNN reporter asked why he was devoting so much time to showcasing praise with more than 40,000 Americans now dead.

‘Nothing is about me,’ the president insisted. 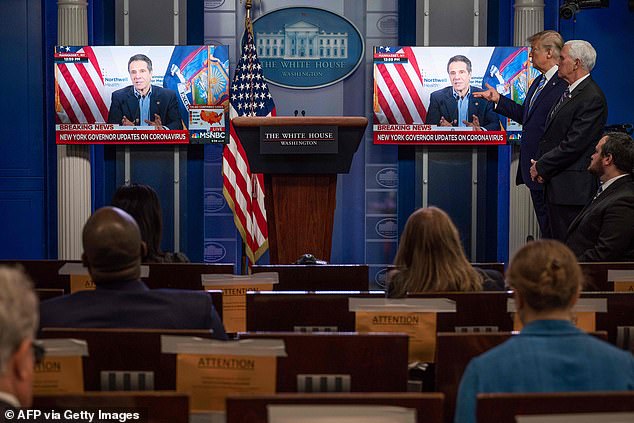 The president had some trouble playing the first clip of Cuomo’s Sunday press conference, as it cut off before it got to the ‘good part’ 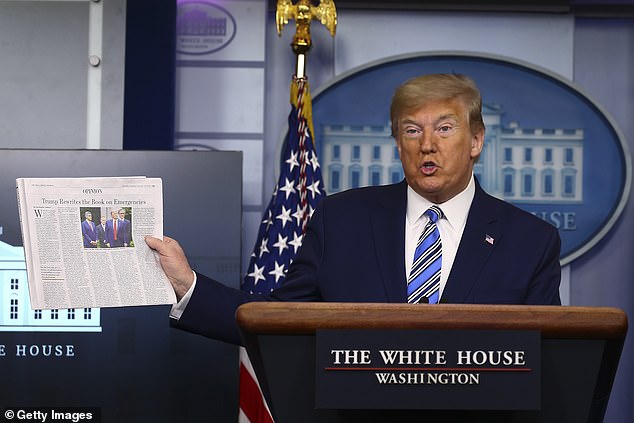 ‘You’re never going to treat me fairly, many of you. And I understand that. I got here with the worst, most unfair press treatment they say in the history of the United States for a president,’ Trump complained. ‘They did say Abraham Lincoln had very bad treatment too.’

Trump made some news at the briefing – he said negotiations with Capitol Hill were ‘getting close’ to adds funds to the Paycheck Protection Program and he said he would utilize the Defense Production Act in order to increase the production of swabs.

He then held up a swab and pulled it out of the packaging so the photographers in the room could get good visuals.

He then handed it off to Vice President Mike Pence, saying he could give it to his wife, Karen.

But Trump mostly used visuals in the briefing room Sunday to promote his own record.

At one point, Trump pulled out a positive Wall Street Journal op-ed and began reading it to the room.

He played clips of Cuomo twice, complaining that in the first clip ‘they left out the good part.’

The video segments were from a press conference the New York governor held Sunday morning.

‘The federal government stepped up and was a great partner,’ Cuomo said in the first clip shown at the White House. ‘I’m the first one to say it. We needed help, and they were there.’ 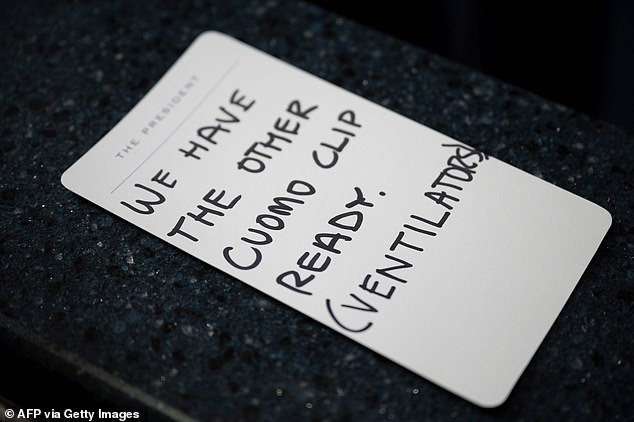 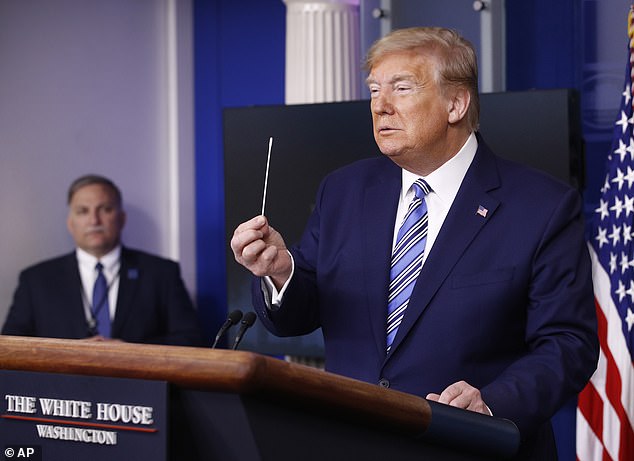 President Trump made some news at the Sunday briefing, saying he would use the Defense Production Act to have more swabs made

Later, spokesman Judd Deere passed along a note to the president informing him the second clip was ready to roll.

‘I just think it’s so good for people because it’s bipartisan,’ Trump said. ‘This is not about Democrats, Republicans,’ he continued.’ This is about a thing that hit our country, the likes of which has never happened to us before.’

In the second Cuomo clip, the New York governor talked about how the state ended up having the supplies they needed. Cuomo had long feared about bed capacity and ventilators and in those areas the federal government had stepped in.