President Donald Trump has said he will ‘negotiate’ a third term in the White House because he’s ‘entitled’ to it.

Trump shared his intent to run for president again in 2024 during a campaign event in Minten, Nevada, on Saturday night.

’52 days from now we’re going to win Nevada, and we’re gonna win four more years in the White House,’ he told a crowd of hundreds of supporters, most of them not wearing masks or socially distancing.

‘And then after that, we’ll negotiate, right? Because we’re probably — based on the way we were treated — we are probably entitled to another four after that.’

Trump has repeatedly suggested that he wants to serve more than two terms in office, alarming critics who believe he isn’t joking about wanting to violate constitutional boundaries.

President Donald Trump said he will ‘negotiate’ a third term in the White House because he’s ‘entitled’ to it during a campaign event in Minden, Nevada, on Saturday night

He made similar comments at a rally in Oshkosh, Wisconsin, last month, saying: ‘We are going to win four more years, and then after that, we’ll go for another four years because they spied on my campaign. We should get a redo of four years.’

But in the past Trump has also claimed that he’s only joking about trying to serve more than two terms.

In November 2018, the president was forced to confirm that he wouldn’t push for an additional four years after he was recorded praising Chinese President Xi Jinping for abolishing term limits.

‘He’s now president for life,’ Trump said at a fundraiser. ‘And look, he was able to do that. I think it’s great. Maybe we’ll have to give that a shot someday.’

In the wake of that clip surfacing, Trump told Fox News’ Chris Wallace that he would not seek a constitutional amendment to allow him a third term.

‘I think the eight-year limit is a good thing, not a bad thing,’ he told Wallace.

Since then Trump has repeatedly backtracked on those comments, charging that he deserves more time in office because of ‘mistreatment’ he’s endured during his first term.

America’s unofficial two-term limit was established under Presidents George Washington and Thomas Jefferson, but was breached by President Franklin Delano Roosevelt, who was elected four times in 1932, 1936, 1940 and 1944. 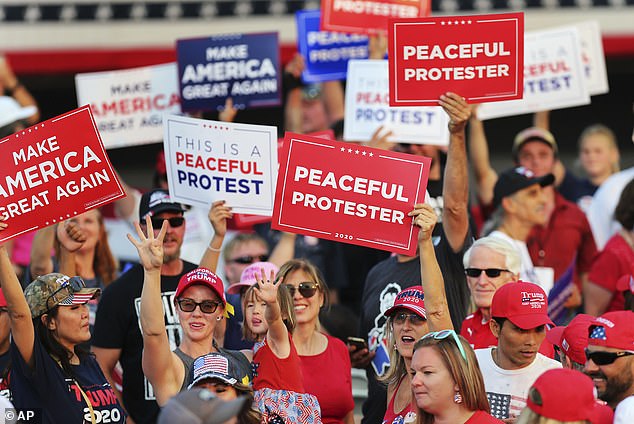 Supporters listen as Trump speaks at a rally in Minden, Nevada, on Saturday night

‘[Biden] is the worst candidate in the history of presidential politics. He doesn’t know he is alive,’ Trump told the crowd at the Minden-Tahoe airport as smoke from wildfires one state over filled the air.

The crowd was riled up, repeatedly yelling ‘four more years’ and ‘we love Trump.’ They waved signs that said ‘peaceful protesters’ – which is what the president has started calling his rallies.

Trump complained that Biden will get a favorable comparison to Winston Churchill, the legendary British prime minister who lead the United Kingdom through World War II. Trump reveres Churchill and often compares himself to the political icon.

‘We have a debate coming up in three weeks and here’s the problem. Winston Churchill was a great debater,’ Trump said.

He said if Biden makes it to the debate and ‘if he gets off the stage they’re going to say it’s the single greatest debate they’ve ever seen. Winston Churchill was nothing compared to Sleepy Joe.’

He repeated several of his previous insults of Biden. In addition to the ‘Sleepy Joe,’ he complained Biden is still in his basement, and railed against Biden’s son Hunter.

‘Using him is just an excuse to get the super libs in there,’ he said.

Trump railed repeatedly against Democratic rival Joe Biden at his rally, saying: ‘He is the worst candidate in the history of presidential politics. He doesn’t know he is alive’

He also attacked Biden’s ability to keep the United States’ safe. Biden has over 40 years of government service.

‘Biden’s plan is to appease domestic terrorists,’ Trump said. ‘He’ll never be able to protect your family, your loved ones, your community.’

He also argued a Biden presidency would ruin the economy. The president has made a strong economy a key to his re-election and it’s one area where voters give him high marks.

He also tied Biden to one of his major pet peeves – windmills.

Trump railed against environmentalists who want to use wind energy, warning people they won’t be able to watch TV at night because the wind’s not blowing.

He complained windmills will kill bald eagles, saying: ‘You want to see a bird cemetery? Walk under a windmill sometime.’

The president also attacked his former Democratic rivals in addition to his 2020 opponent – bringing up Hillary Clinton’s emails, which was a popular line for him on the 2016 campaign trail, and complaining about President Barack Obama’s Nobel Peace Prize.