President Donald Trump said Democrat criticism of the White House response to coronavirus is ‘a new hoax intended to undermine his leadership’.

The President told a rally in North Charleston, South Carolina, that Democrats want him to fail and insisted the steps he has taken had kept cases to a minimum and prevented virus deaths in the U.S.

‘A virus that starts in China, bleeds its way into various countries all around the world, doesn’t spread widely at all in the United States because of the early actions that myself and my administration took, against a lot of other wishes, and the Democrats’ single talking point, and you see it, is that it’s Donald Trump’s fault,’ Trump said.

The coronavirus outbreak’s impact on the world economy grew more alarming today, even as Trump denounced criticisms of his response to the threat as a ‘hoax’ cooked up by his political enemies.

Trump insisted the steps he has taken had kept cases to a minimum and prevented virus deaths in the U.S.

New data released by manufacturing powerhouse China, where the virus was first detected in December, showed a sharp drop in the purchasing managers’ index to 35.7 in February, down from 50 in January. Any reading above 50 indicates expansion, while a reading below shows contraction.

National Bureau of Statistics senior statistician Zhao Qinghe said the novel coronavirus outbreak was a direct cause of the sharp decline.

Despite anxieties about a wider outbreak in the U.S., Trump has defended measures taken and lashed out Friday at Democrats who have questioned his handling of the threat, calling their criticism a new ‘hoax’ intended to undermine his leadership.

Shortly before Trump began to speak, health officials confirmed a second case of coronavirus in the U.S. in a person who didn’t travel internationally or have close contact with anyone who had the virus. 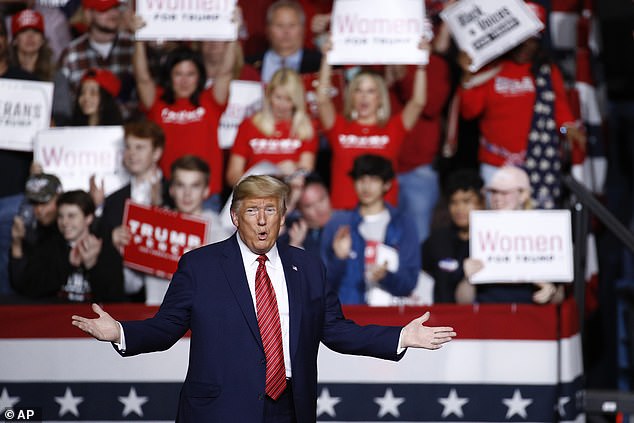 President Donald Trump said Democrat criticism of the White House response to coronavirus is ‘a new hoax intended to undermine his leadership’. Pictured: Trump arrives to speak at a campaign rally in North Charleston

Some Democrats have said Trump could have acted sooner to bolster the U.S. response to the virus. Democratic and Republican lawmakers also have said his request for an additional $2.5 billion to defend against the virus isn’t enough. They’ve signaled they will provide substantially more funding.

The chairman of the Federal Reserve, Jerome Powell, said that the U.S. economy remains strong and that policymakers would ‘use our tools’ to support it if necessary.

Despite that, individual states are bracing for further impact. The speaker of Hawaii´s House of Representatives said Friday he wants to form a committee to examine the potential economic effects of the outbreak so lawmakers can be prepared to cut spending if tax revenue drops sharply.

The list of countries touched by the illness has climbed to nearly 60 as Mexico, Belarus, Lithuania, New Zealand, Nigeria, Azerbaijan, Iceland and the Netherlands reported their first cases. More than 84,000 people worldwide have contracted the illness, with deaths topping 2,800.

Even in isolated, sanctions-hit North Korea, leader Kim Jong Un has called for stronger anti-virus efforts to guard against COVID-19, saying there will be ‘serious consequences’ if the illness spreads to the country.

China, where the outbreak began in December, has seen a slowdown in new infections and on Saturday morning reported 427 new cases over the past 24 hours along with 47 additional deaths. The city at the epicenter of the outbreak, Wuhan, accounted for the bulk of both.

New cases in mainland China have held steady at under 500 for past four days, with almost all of them in Wuhan and its surrounding Hubei province.

With the number of discharged patients now greatly exceeding those of new arrivals, Wuhan now has more than 5,000 spare beds in 16 temporary treatment centers, Ma Xiaowei, director of the National Health Commission, told a news conference in Wuhan on Friday.

Official figures on Saturday showed 1,726 patients had been released in Wuhan the day before, against just 420 new cases in the city.

South Korea, the second hardest hit country, on Saturday morning reported 594 new cases, the highest daily jump since confirming its first patient in late January. Emerging clusters in Italy and in Iran, which has had 34 deaths and 388 cases, have led to infections of people in other countries. France and Germany were also seeing increases, with dozens of infections.

Streets were deserted in the city of Sapporo on Japan´s northernmost main island of Hokkaido, where a state of emergency was issued until mid-March.

More than 60 cases – the largest from a single prefecture in Japan – have been detected on the island prefecture, where experts have raised concern about growing clusters of patients with unknown transmission routes.

Prime Minister Shinzo Abe, who has been criticized for lacking leadership and crisis management, has stepped up measures earlier this week, and urged all elementary, middle and high school across the county to close until the end of March.

The head of the World Health Organization on Friday announced that the risk of the virus spreading worldwide was ‘very high,’ while U.N. Secretary-General Antonio Guterres said the ‘window of opportunity’ for containing the virus was narrowing.

Stock markets around the world plunged again Friday. On Wall Street, the Dow Jones index took yet another hit, closing down nearly 360 points. The index has dropped more than 14% from a recent high, making this the market’s worst week since 2008, during the global financial crisis.

In Asia, Tokyo Disneyland and Universal Studios Japan announced they would close, and events that were expected to attract tens of thousands of people were called off, including a concert series by the K-pop group BTS.

Tourist arrivals in Thailand are down 50% compared with a year ago, and in Italy – which has reported 888 cases, the most of any country outside of Asia – hotel bookings are falling and Premier Giuseppe Conte raised the specter of recession. The Swiss government banned events with more than 1,000 people, while at the Cologne Cathedral in Germany, basins of holy water were emptied for fear of spreading germs.

In a report published Friday in the New England Journal of Medicine, Chinese health officials said the death rate from the illness known as COVID-19 was 1.4%, based on 1,099 patients at more than 500 hospitals throughout China.

Assuming there are many more cases with no or very mild symptoms, the rate ‘may be considerably less than 1%,’ U.S. health officials wrote in an editorial in the journal. That would make the virus more like a severe seasonal flu than a disease similar to its genetic cousins SARS, severe acute respiratory syndrome, or MERS, Middle East respiratory syndrome.

Given the ease of spread, however, the virus could gain footholds around the world and many could die.

Europe’s economy is already teetering on the edge of recession. A measure of business sentiment in Germany fell sharply last week, suggesting that some companies could postpone investment and expansion plans. China is a huge export market for German manufacturers.

Economists have forecast global growth will slip to 2.4% this year, the slowest since the Great Recession in 2009, and down from earlier expectations closer to 3%. For the United States, estimates are falling to as low as 1.7% growth this year, down from 2.3% in 2019.

But if COVID-19 becomes a global pandemic, economists expect the impact could be much worse, with the U.S. and other global economies falling into recession.