Donald Trump pressed Saudi Arabian leadership in 2018 on whether a bone saw was used to dismember the journalist Jamal Khashoggi, a Thursday report revealed.

‘We’re standing behind Saudi Arabia,’ Trump said during a call, ‘but we’ve got to get to the bottom of this.’

Kirsten Fontenrose, then director of Gulf affairs at the National Security Council, would listen in on the calls between Trump and Crown Prince Mohammad Bin Salman and his father King Salman.

Trump, she told Yahoo News, couldn’t get over intelligence revealing that a ‘bone saw’ was used to dismember Khashoggi’s body after he was murdered in the Saudi consulate in Istanbul, Turkey.

She claimed Trump would tell say on calls with the Saudis: ‘This will change everything, you guys. We’ve got to know. We’re with you… but we’ve got to get to the bottom of this.’

The then-president saw prospects of Middle East peace dwindle after MBS ordered the journalist’s murder in 2018.

Donald Trump pressed Saudi’s several times on whether a bone saw was used to dismember journalist Jamal Khashoggi’s body after after he was murdered. Trump stands with senior adviser and son-in-law Jared Kushner (right) and Crown Prince Mohammed bin Salman (left) in Saudi Arabia in May 2017 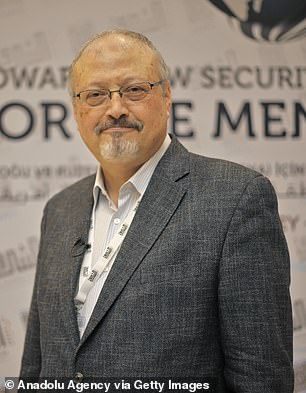 Khashoggi was a Saudi dissident who wrote articles critical of MBS and the government. The CIA concluded he was assassinated at the direction of MBS on October 2, 2018

‘I’ve been in difficult negotiations. I’ve never had to take a bone saw,’ Trump said at the time, according to Fontenrose.

‘Have you ever had to take a bone saw into negotiations?’ Trump asked then-Secretary of State Mike Pompeo.

‘No Mr. President, ha-ha,’ Pomepo responded, and repeated as the 45th president pushed the matter: ‘No, no, no, Donald, we didn’t know anything about it. We’re still trying to get to the bottom of this.’

Khashoggi was a Saudi journalist, Washington Post columnist and dissident. He fled from Saudi Arabia in 2017 and relocated to the U.S. when he became fearful of retaliation for his criticism of Crown Prince Salman.

On October 2, 2018 Khashoggi walked into the Saudi consulate in Istanbul, Turkey to obtain marriage documents, but was never seen leaving.

Three days after the murder, the Crown Prince MBS told Bloomberg that, to the best of his knowledge, Khashoggi left the consulate. However, as Turkish officials started revealing details of the incident – including leaking audio tapes from inside the consulate, the Saudis said Khashoggi died in a ‘fist fight.’

Ultimately, MBS landed on claiming Khashoggi has been murdered by ‘rouge killers’ who acted outside the Saudi government.

‘I just spoke with the King of Saudi Arabia, who denies any knowledge of what took place with regard to, as he said, his Saudi Arabian citizen,’ Trump said on October 15, 2018. ‘It sounded to me like maybe these could have been rogue killers. Who knows?’

The CIA, however, concluded in mid-November 2018 that MBS had, in fact, ordered Khashoggi’s assassination.

The conclusion came after a probe revealed a team of 15 Saudi-linked agents flew to Istanbul on government aircraft in October. 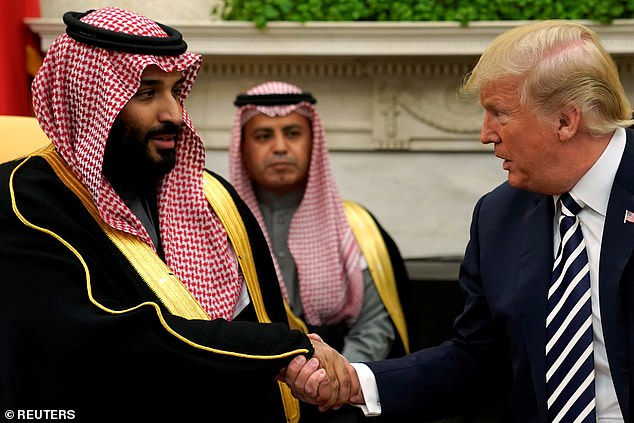 ‘I’ve been in difficult negotiations. I’ve never had to take a bone saw,’ Trump said of the intelligence, according to a Thursday report. Here Trump shakes hands with MBS during his visit to the White House on March 20, 2018 – seven months before Khashoggi’s murder 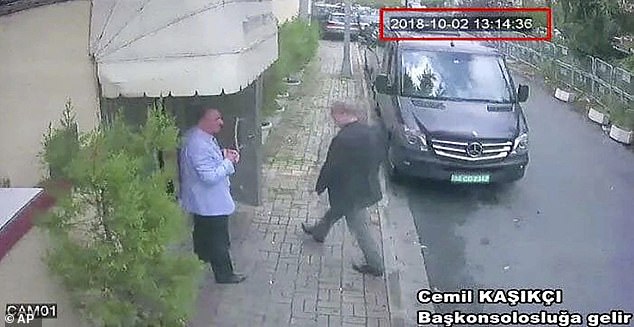 Jamal Khashoggi (right) is pictured in CCTV footage walking into the Saudi Arabian consulate in Istanbul, Turkey on October 2, 2018 to obtain papers related to his marriage. He was never seen again

Khashoggi’s murder sparked a crisis within the White House’s foreign policy team, especially with his son-in-law Jared Kushner, who had made the Saudis the keystone of his Middle East strategy.

In fact, Trump’s first foreign trip as president was to Saudi Arabia and he hosted MBS at the White House.

Trump’s national security adviser at the time, John Bolton, wanted the president to be harder on Saudi Arabia and reveal intelligence related to Khashoggi’s murder.

‘Get the full story out, whatever the full story is,’ Bolton says he and Kushner told the crown prince in a phone call shortly after Khashoggi’s disappearance.

Fontenrose, who monitored the calls between Trump and Saudi Arabian leadership, said the president pushed MBS and his father, King Salman, on what they knew about the murder.

‘The president had multiple calls with MBS and with King Salman, specifically asking them, did you know anything about this?’ Fontenrose told Yahoo. ‘The president would flat out ask, I mean, up to a dozen times on any individual phone call, whether it was with King Salman or with MBS or both of them, ‘Did you have any knowledge of this operation?’ ‘Did you know this was going to happen?’ ‘Did you give this order?’

‘Yes, Donald,’ they would say, ‘we totally understand this makes things difficult for you and we’re trying to get to the bottom of it.’