President Trump pushed back on comments Dr. Anthony Fauci said on Thursday that cast doubt on the U.S.’s ability to do widespread testing for the coronavirus.

Fauci, the director of the National Institute of Allergy and Infectious Diseases, did an interview that was part of a ‘Time 100’ program on Thursday and said the country still needed to ‘significantly’ increase COVID-19 testing. 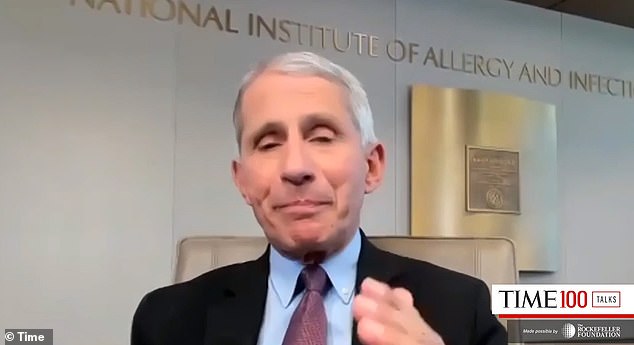 Fauci did an interview that was part of a ‘Time 100’ event and said the country needed to ‘significantly’ ramp up testing capabilities and the U.S. wasn’t there eyt 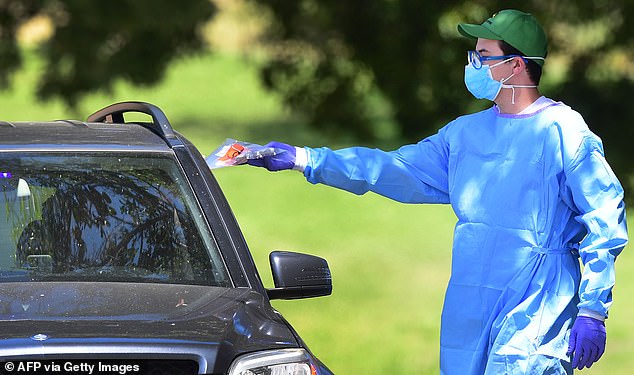 A healthcare volunteer gives a COVID-19 test kit to a driver in Los Angeles, California on Thursday

‘We need to significantly ramp up not only the numbers of tests, but the capacity to perform them, so that you don’t have a situation where you have a test but it can’t be done because there isn’t a swab, or because there isn’t extraction media, or not the right vial,’ Fauci said in the livestreamed Q&A.

‘I am not overly confident right now at all that we have what it takes to do that,’ the doctor continued.

‘We are doing better, and I think we are going to get there, but we are not there yet,’ Fauci added.

For weeks, President Trump has painted a rosy picture of the country’s testing capabilities, while governors – who the president has put in charge of handling testing – have pleaded for help.

Even New York Gov. Andrew Cuomo, who agreed with the president that testing should be done on a state level, still asked Trump to untangle a supply chain issue that’s preventing test manufacturers from getting components of the tests that they need.

He called the situation a ‘quagmire.’

Earlier this week, Ohio Gov. Mike DeWine said he needed the Food and Drug Administration to cut some red tape and allow for a slightly different chemical composition to be used in the extraction reagent.

‘If anybody in the FDA is watching, this would really take our, take our capacity up, literally Chuck, overnight,’ he told NBC News’ Chuck Todd on ‘Meet the Press.’ ‘And that’s, that’s what we need to get moving in Ohio.’

At the Thursday briefing, Trump continued to say, ‘as I’ve said many times, we are very advanced in testing.’

Fauci wasn’t present at the Thursday briefing where Trump rebuffed the doctor’s comments.

But Fauci did discuss his relationship with Trump during the ‘Time 100’ interview and that retweet from the president that included the hashtag #FireFauci.

‘I meet with the president literally every day,’ Fauci said. ‘There was no way he was going to do that, because he had no intention to do that. As he said publicly when he was asked about it, that’s not even on the table,’ the doctor said of axing him.

‘My job always is, and I’ve always done it and will continue to do it, is to give advice on the basis of evidence and science,’ Fauci added.