The Trump Organization is reportedly closing in on a deal to sell off its Washington, DC hotel for somewhere between $370 and $400 million.

If the deal were to fetch $400 million, it would represent a near doubling of the money former President Trump’s family company spent to convert the government building into an ostentatious lodging.

CGI Merchant Group, a Miami-based investment firm, is in talks to acquire the lease, sources familiar with the matter told the Wall Street Journal.  The property is owned by the federal government as the hotel is located in the former Old Post Office, but the lease could run as long as 100 years.

CGI has also discussed with hotel operators, including Hilton’s luxury Waldorf Astoria brand, removing the Trump name from the lodging.

The Trump Organization is reportedly closing in on a deal to sell of its Washington, DC hotel for somewhere between $370 and $400 million 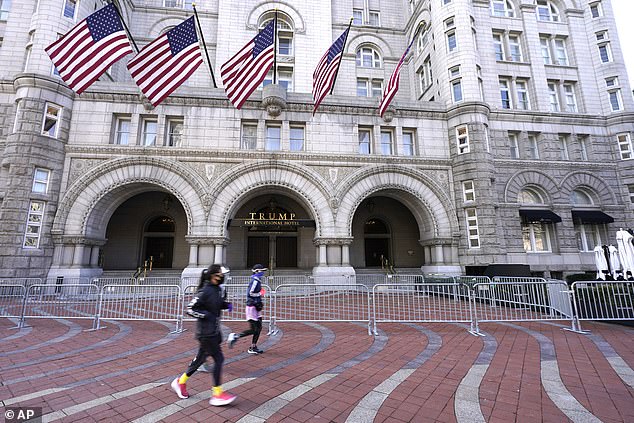 If the deal were to fetch $400 million, it would represent a near doubling of the money former President Trump’s family company spent to convert the government building into an ostentatious lodging

The Trump organization bought the property in 2012 years ago and the hotel opened in 2016. It had beat out some of the biggest names in the hotel business for the lease, including Marriott and Hilton.

Since 2016, the hotel reportedly lost more than $70 million, requiring Trump to inject $24 million in aid from other businesses. The Trumps have disputed such findings.

Just a short walk from the White House, the Trump Hotel offers some of the biggest rooms in the nation’s capital. To book a room for two guests for one night on Saturday, Oct. 16, the cost begins at $636 and could run as high as $1,636 for a signature suite. 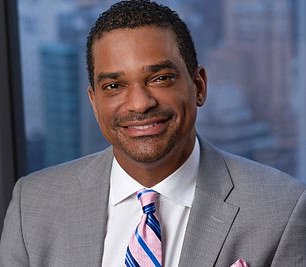 CGI founder and chief executive Raoul Thomas donated $72,000 to Joe Biden and  the Democratic Party in the 2020 election, but more recently has given $25,000 to Florida  Gov. Ron DeSantis’ campaign committee.

He donated to former President Obama in 2008 and Hillary Clinton in 2016, according to campaign finance records.

Just last month, he donated $2,900 to PAC ‘Becker for Arizona,’ to elect Republican Nina Becker to the House in 2022.

CGI owns and invests in a number of other hotels, apartment buildings and commercial real estate properties.

A recent congressional report from the House Oversight Committee found that Trump lost  $73 million on the DC hotel, while claiming multi-million dollar profits in his disclosure forms.

Trump’s most recent disclosure, which covered all of 2020 and the first few weeks of 2021, showed the hotel took a major hit from shutdowns due to the coronavirus pandemic. The hotel’s revenue fell to $15 million, compared with $40 million in 2019. 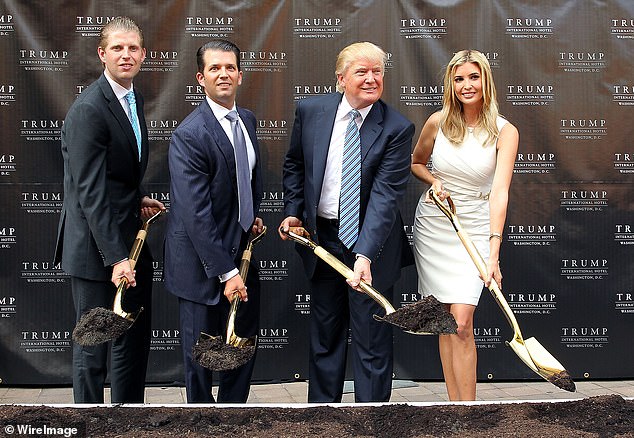 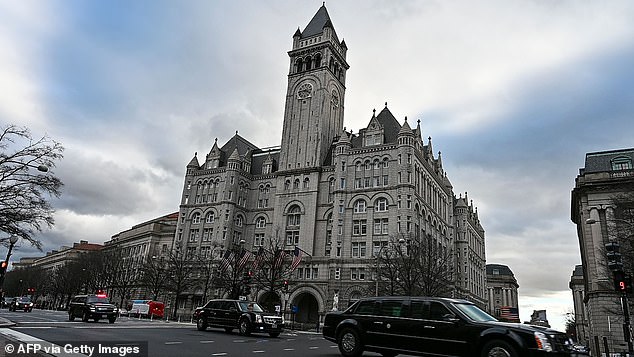 CGI Merchant Group, a Miami-based investment firm, is in talks to acquire the lease 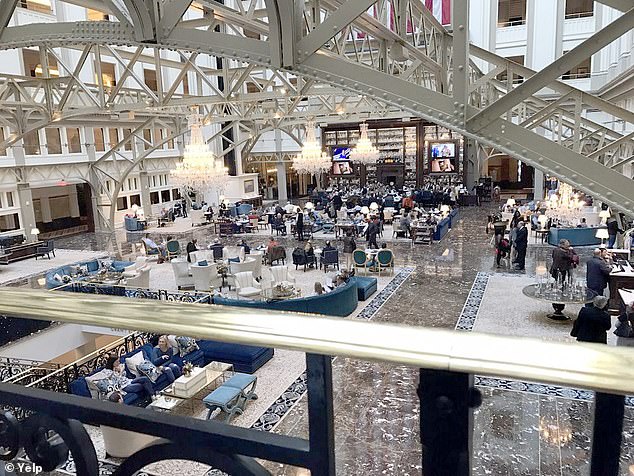 The hotel has come under renewed scrutiny from Democratic-controlled House committees, as it was a fixture of Trump’s 2016 presidential campaign and became a hub of activity for supporters during his administration.

Once bustling with Trump world heavyweights, often including the former first family, the hotel was eerily quiet when DailyMail.com took a trip in the weeks following Biden’s inauguration.

But far from being a revenue-generator, it was a ‘failing business saddled by debt,’ according to a letter the Democratic-run Oversight panel wrote to the General Services Administration, known as the nation’s landlord.

‘Taken together, these documents show that far from being a successful investment, the Trump Hotel was a failing business saddled by debt that required bailouts from President Trump’s other businesses,’ panel chair Rep. Carolyn Maloney (D-N.Y.) wrote.

‘In deciding to conceal the Trump Hotel’s true financial condition from federal ethics officials and the American public, President Trump hid conflicts of interest stemming not just from his ownership of the hotel but also from his roles as the hotel’s lender and the guarantor of its third-party loans.’

The panel found that Trump ‘provided misleading information about the financial situation of the Trump Hotel in his annual financial disclosures; received undisclosed preferential treatment from a foreign bank on a $170 million loan to the hotel that the President personally guaranteed; accepted millions of dollars in emoluments from foreign governments without providing an accounting of the money’s source or purpose; concealed hundreds of millions of dollars in debts from GSA when bidding on the Old Post Office Building lease; and made it impossible for GSA to properly enforce the lease’s conflict-of-interest restrictions by engaging in opaque transactions with other affiliated entities,’ according to the letter.

The letter charges that Trump ‘hid’ the losses from the public by failing to disclose them.

But the letter does not charge that Trump necessarily violated the law. The president is officially exempt from criminal conflict-of-interest laws that apply to other federal employees.

‘While the Committee did not draw a conclusion about whether President Trump’s federally mandated disclosures were in technical compliance with reporting requirements, it is clear that the disclosures failed to provide the public with an accurate picture of President Trump’s businesses, their financial health, and the nature and extent of the conflicts of interest they posed,’ Maloney writes.

Instead, it says, ‘By portraying the hotel as a successful business, President Trump concealed significant ethical issues stemming from his failing business. The hotel’s massive losses decreased President Trump’s personal net worth, compromised the hotel’s ability to repay loans from other entities owned by the President, and potentially jeopardized his other personal assets due to the personal guarantee he provided for the Trump Hotel’s $170 million debt.’

The money-losing state of the hotel follows a report that Trump has tumbled out of the ultra-exclusive Forbes 400 list of America’s richest people for the first time since making it on in 1996, worth $400 million shy of this year’s cutoff, the outlet revealed Tuesday.

According to the committee, Trump renegotiated a construction loan for the hotel with Deutsche Bank, converting it in 2018 to an interest-only loan, with no principal due until 2024.

The former president is worth $2.5 billion, according to Forbes, after he lost $600 million of his fortune during the COVID-19 pandemic. 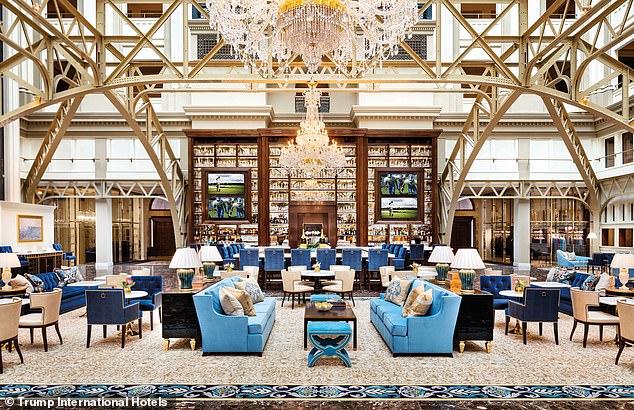 The Trump International Hotel Washington D.C. features a spacious lobby and bar area, where allies of the president are often spotted hanging out

Trump was ranked 339th last year. His highest ever position was at 71st in 2003, the year before he launched his NBC hit series The Apprentice.

But in March 2020, three years after Trump refused to divest from his name-brand real estate holdings, the coronavirus pandemic upended the economy.

Divesting when he took office in 2017 would have been an opportunity to diversify his assets, Forbes argues.

Even if he divested and paid maximum capital gains tax, investing the rest into wider portfolios like the S&P 500 could have left him 80 percent richer than he is today.

If the maximum penalties were applied Trump would have lost about $1.1 billion in wealth, leaving $2.4 billion.

However, if the rest had been re-invested into a stock portfolio tracking something more stable and diversified like the S&P 500 index, Trump could have been worth a staggering $4.5 billion today.

Instead, his narrow wealth portfolio was dealt a blow by the pandemic’s particularly powerful impact on tourism and hospitality, as well as big city real estate prices.

A June Associated Press review of more than 4,000 transactions over the past 15 years in 11 Trump-branded buildings in Chicago, Honolulu, Las Vegas and New York found prices for some condos and hotel rooms available for purchase have dropped by one-third or more.

That’s a plunge that outpaces drops in many similar buildings, leaving units for sale in Trump buildings to be had for hundreds of thousands to up to a million dollars less than they would have gone for years ago.