New York Attorney General Letitia James has sued Donald Trump and accused him of engaging in ‘numerous acts of fraud,’ in a legal move that follows a three-year probe and seeks to rip away his ability to do business in the state for years.

James announced the suit against the former president at a dramatic Wednesday press conference, citing a document that accuses Trump and his three adult children of pumping up property far beyond their actual valuations when seeking lending to expand his real estate empire.

‘Claiming you have money that you do not have does not amount to the “Art of the Deal. It’s the art of the steal,’ she said, referencing Trump’s famous book.

She specifically named Trump and his three adult children, Don Jr., Eric, and Ivanka Trump, and said they ‘persistently’ inflated the value of assets.

She spoke following a review of ‘millions of documents’ with a team of investigators, and told reporters she was suing Trump for ‘violating the law as part of his efforts to generate profits for himself, his family and his company.’

James said he did so ‘to cheat the system and to cheat all of us,’ and is seeking $250 million – while asking a judge to ‘permanently’ bar Trump and his adult children ‘from serving as an officer or director in any corporation or similar similar entity registered and or licensed in New York.’

She also wants to bar Trump and his adult children from obtaining lending in the state, or engaging in commercial real estate purchases for a period of five years – hitting at a business that is at the heart of their livelihood.

Trump would maintain his financial interest in the property even if a judge rules against him in the suit.

And although her suit is only a civil matter, James said she would refer evidence she uncovered to other authorities.

James said Trump’s financial statements were ‘greatly inflated, grossly exaggerated, and objectively false,’ and went on to detail many of those valuations that he claimed.

‘There cannot be different rules for different people,’ she said. ‘Former presidents are no different,’ she added, acknowledging Trump’s station.

Her suit comes after a three-year probe, and less than two months before the November elections, where Trump isn’t on the ballot but many of his preferred candidates are.

That amount is for ‘disgorgement of all financial benefits obtained through the persistent fraudulent practices,’ according to the AG’s office.

James referred specifically to ‘statements of financial condition’ prepared for Trump by his accountants and executives, which were obtained after a lengthy legal battle involving Trump and his longtime former accounting firm Mazars USA that ultimately went to the Supreme Court.

Trump vouched to the accuracy of those statements when submitting them to banks and insurance companies. But according to James, he signed off on things that were not true.

‘We show that they violated several state criminal laws, including falsifying business records, showing false financial statements, insurance fraud, and engaging in a conspiracy to commit each of these state law violations,’ she said. 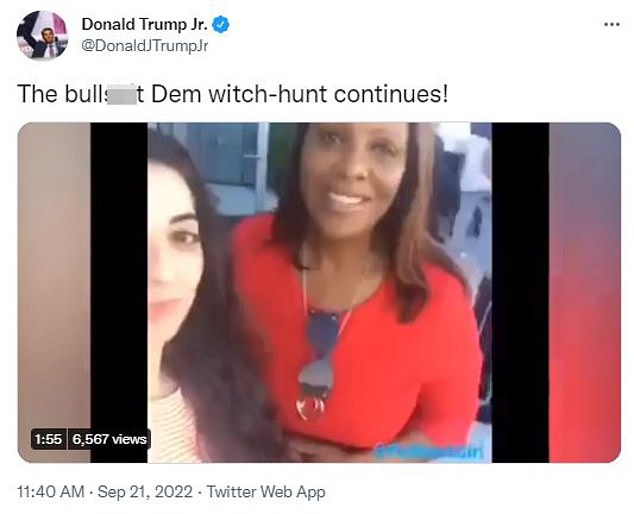 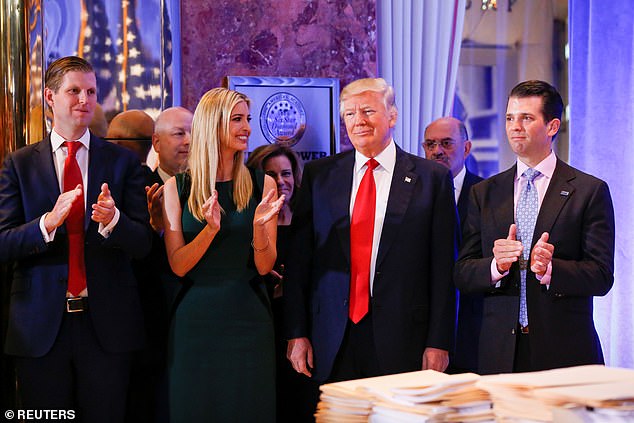 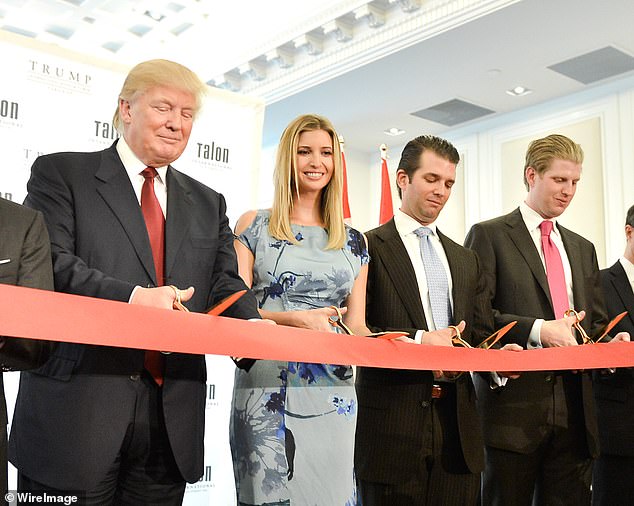 She said Trump inflated his net worth to ‘deceive banks’ 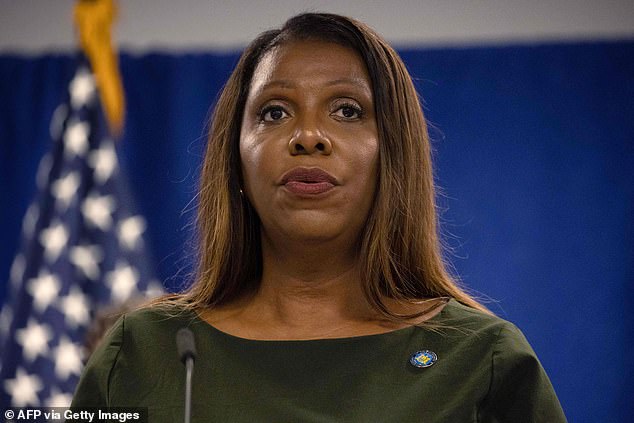 Don Jr. and Eric Trump each accused James of running a ‘witch hunt’ 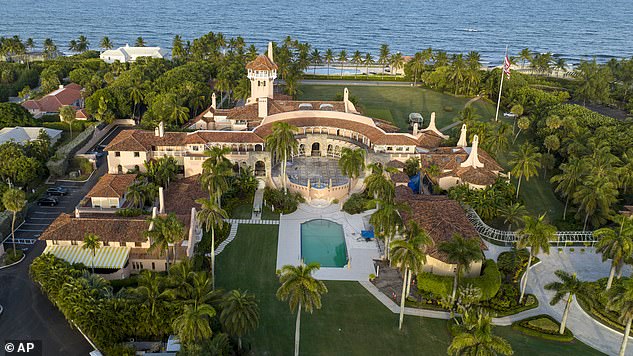 James’ suit accuses Trump of pumping up the value of Mar-a-Lago. Trump has repeatedly attacked the FBI for the raid on the property August 8 in search of government documents

She accused them of creating ‘more than 200’ false and misleading asset valuations.

Among his alleged misdeeds, she accused Trump of ‘intentional and deliberate fraud’ by tripling the size of his Trump Tower penthouse apartment, thereby goosing its value.

‘To this date, no other apartment in New York City has ever sold for that much,’ she said.

Eric Trump also took to Twitter to hit back. ‘Not a political “witch hunt?!” What a joke…’ he wrote.

Trump weighed in about an hour later with a post on his Truth Social site.

‘Another Witch Hunt by a racist Attorney General, Letitia James, who failed in her run for Governor, getting almost zero support from the public, and now is doing poorly against Law & Order A.G. candidate, highly respected Michael Henry,’ Trump wrote. ‘I never thought this case would be brought – until I saw her really bad poll numbers. She is a fraud who campaigned on a “get Trump” platform, despite the fact that the city is one of the crime and murder disasters of the world under her watch!’

Both ran the Trump Organization as executives along with CFO Allen Weisselberg while Trump was in the White House. 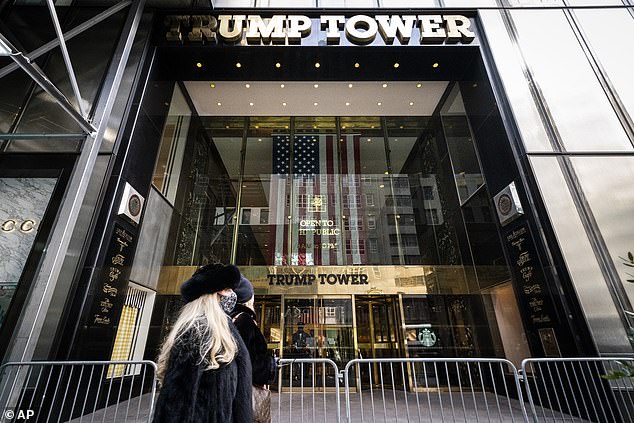 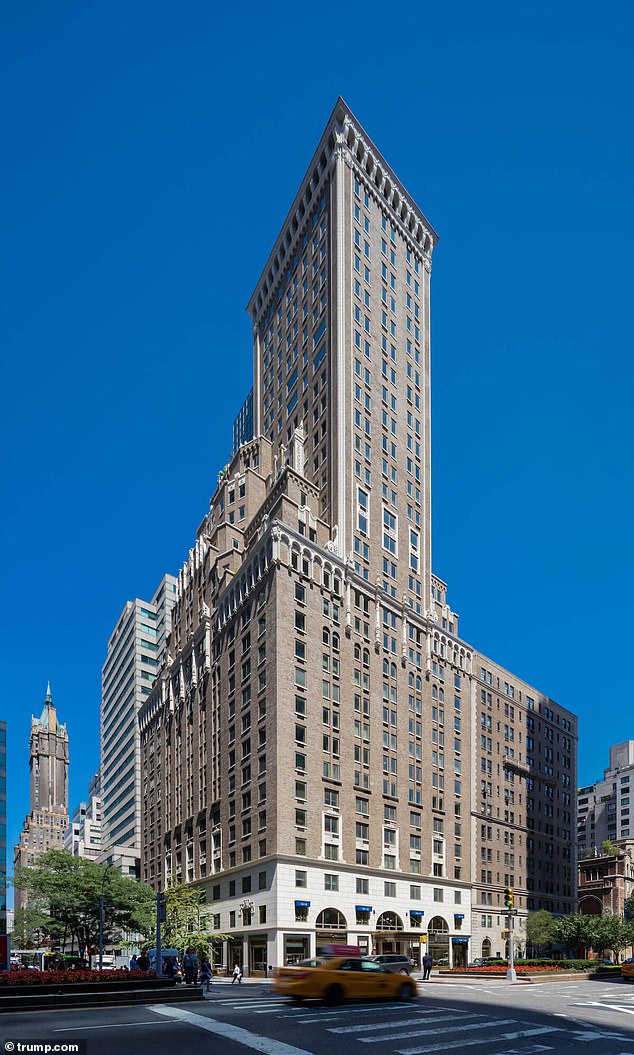 She mentioned a raft of Trump properties including 40 Wall Street 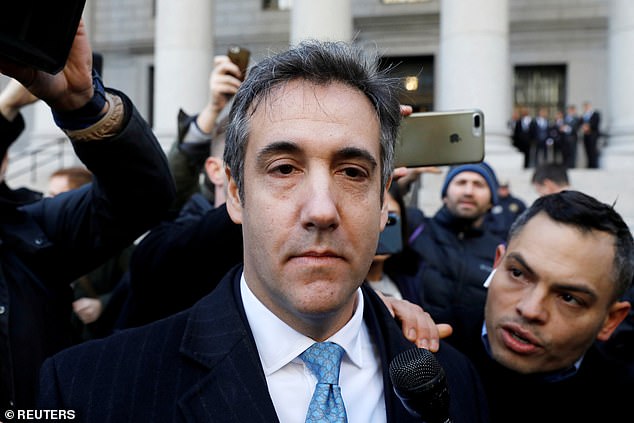 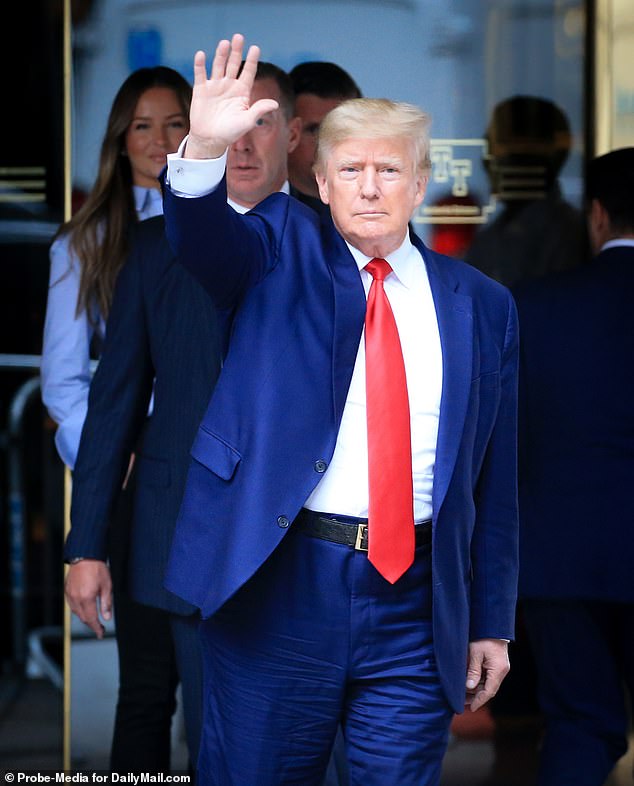 Trump is already facing multiple probes, including a DOJ investigation of 300 classified documents that were held at Mar-a-Lago after he left office 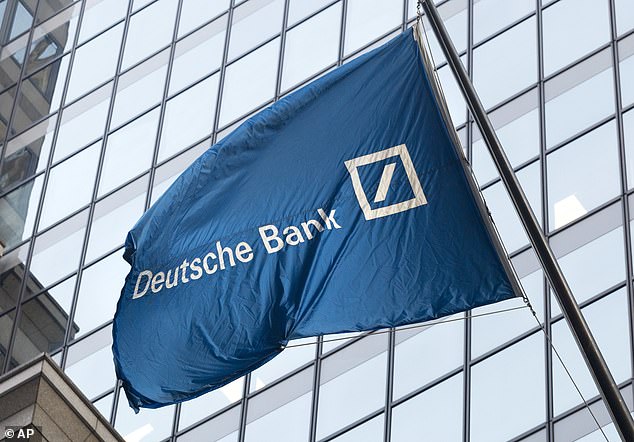 According to James, the ‘false’ statements were used to get funding from Deutsche Bank and other lenders backed up by assets that weren’t worth as much as claimed. She said white collar crime is not ‘victimless’ 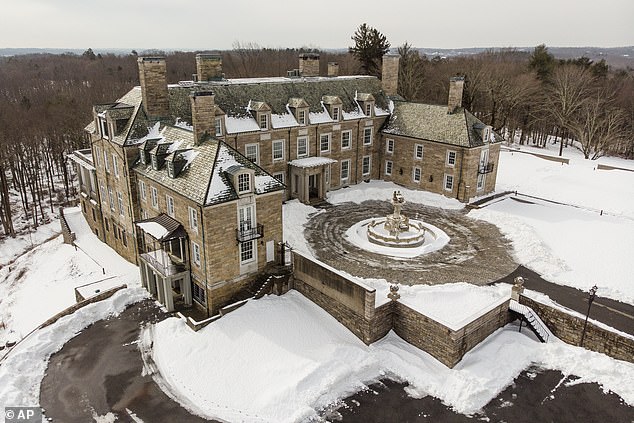 The suit also points to the valuations for Seven Springs, a Trump property in Mount Kisco, NY

Mar-a-Lago for $739 million and a triplex for $327 million: The properties James has accused Trump of inflating

She also brought up Trump properties including 40 Wall Street.

James said he ‘blatantly ignored legal restrictions’ at Mar-a-Lago by stating it could be developed for residential use, when in fact it was subject to numerous limitations. He valued the property based on a ‘false premise’ that it could be sold and used at a private home, and said it should have been valued at $75 million, when the Trumps valued it as high as $739 million.

Financial states to obtain lease on the Old Post Office in Washington, D.C.

She pointed to 12 rent-stabilized apartments at Trump Park Avenue in New York, and said a professional appraiser put them as being worth $750,000 in total because tenants couldn’t be forced to leave.

But Trump ‘valued them collectively on his statements at $49 million,’ she said.

‘Despite this professional valuation, and Mr. Trump knowing full well the legal restrictions [impacting how] the 12 rent stabilized units were valued, he valued them collectively on his statements at $49 million. That is about 65 times the appraised valuation

During her extended remarks, James mentioned a series of Trump properties including: Trump Tower, 40 Wall Street, Mar-a-Lago, the lease on the Old Post Office in Washington, D.C., Seven Springs in Westchester County, NY, and Trump National Golf Club in LA.

She said he submitted ‘false and misleading statements of financial condition’ when engaging in lease negotiations with the federal government during the Obama Administration when he obtained a long-term lease for the Old Post Office Building, a landmark building in Washington D.C.

Her suit runs to 222 pages, and said her remarks ‘barely scratch the surface of the misconduct we uncovered.’

She is asking a court to serve the Trumps for serving as an officer of any company int he state, from entering into any commercial real estate acquisition for five years, or applying for any loans for the same period.

Claiming you have money that you do not have does not amount to the “Art of the Deal. It’s the art of the steal,’ she said, referencing Trump’s famous book.

James said her office would present evidence to prosecutors in the Southern District of New York, the IRS, and the Manhattan US Attorney’s office.

James, who has become a repeated Trump target in fundraising appeals and statements, did not restrict her comments to the facts of the case.

‘Everyday people cannot lie to a bank about how much money they have in order to get a favorable loan to buy a home or to send their kid to college. And if they did, the government would throw the book at them,’ she said.

‘Why should this be any different? It is a tale of two justice systems, one for everyday, working people and one for the elite, the rich and the powerful. Mr. Trump and his allies may say that these penalties are too harsh, or that this is part of a witch hunt.

‘I will remind everyone that this investigation only started after Michael Cohen, the former lawyer, his former lawyer, testified before Congress and shed light on this misconduct,’ she said, pointing to the former lawyer who went to prison for tax and campaign violations following his role in the Stormy Daniels matter.

Trump lawyer Alina Habba said in a statement there was ‘no wrongdoing has taken place’ in the transactions highlighted by James.