‘I’m going to win in a LANDSLIDE!’ Donald Trump claims his coronavirus response will win him the election saying ‘people love Trump’ then attacks ‘hostile’ media and complains his poll ratings should be higher

President Trump said Monday he was likely to win re-election by a ‘landslide,’ while complaining that the poll numbers for his administration’s response to the coronavirus pandemic should be higher.

The president had been asked by PBS Newshour’s Yamiche Alcindor if by downplaying the virus – for example, not wearing a mask – he got some people sick. 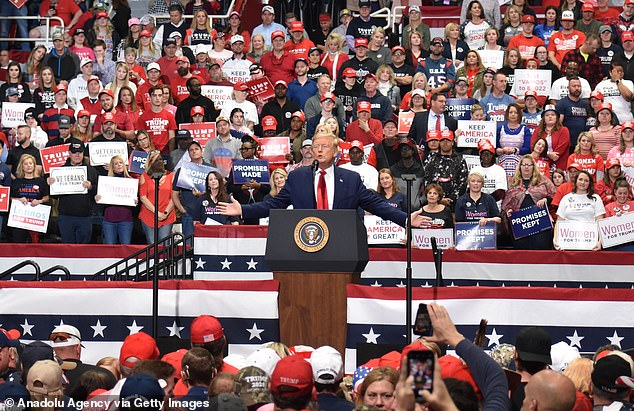 Trump continued to hold campaign rallies through February and into early March. The president continued to point to his travel bans with China and Europe as proof that he did enough

Alcindor spoke of an interview she had conducted with a person who said his family got sick ‘because they listened to you’ and didn’t take enough precautions.

Instead of answering the question head-on, Trump talked about his supporters and then pointed to his initial action on the coronavirus, a late-January travel ban from China, which excluded American citizens.

In February and March the president made a number of questionable statements about the spreading coronavirus and also continued actively campaigning through early March.

When Alcindor pointed out that the president was still holding campaign rallies – such as a March 2 rally in Charlotte, North Carolina, he wouldn’t admit that was the case.

‘I really don’t know about rallies. I really don’t know about rallies,’ he said when she insisted he was still campaigning in March. ‘I know one thing I haven’t left the White House in months,’ he said, adding that the one time he did leave the White House was for a trip to Norfolk, Virginia on March 28 to bid adieu to the USNS Comfort – the hospital ship heading to New York.

At another point in the briefing, Trump complained that poll numbers for his team’s coronavirus response weren’t higher.

‘Look, I don’t understand, when I see, uh, polling and approval ratings for the job,’ he said. ‘This group should get a 95, it really should. And we’re really helping the governors a lot.’

The Real Clear Politics polling average says that 47 per cent approve of the president’s handling of the coronavirus crisis with a slightly higher amount – 50.7 – disapproving of his actions.

The president suggested one problem was that ‘the media foments a lot of anger.’

‘For instance, I’ll be asked a tremendously hostile question from somebody and then I’ll answer it in a hostile way, which is appropriate otherwise you look foolish,’ the president explained. ‘Other it looks like you walk off the stage and bow your head.’