EXPRESS INFORMER > News & Politics > Trump calls Biden an ‘enemy of the state’ at campaign-like rally in Pennsylvania for Dr. Oz

Trump, who’s Mar-a-Lago property was recently raided by the FBI, called Biden an ‘enemy of the state’ who vilified anybody that voted for Trump.

He also said ‘I may just have to do it again,’ referencing a second run at the presidency in 2024 after winning it in 2016.

The event in Wilkes-Barre, Pennsylvania featured other high-profile Republicans like Marjorie Taylor Greene and Doug Mastriano.

He focused much of the speech on Pennsylvania’s largest city of Philadelphia, where crime has spiked recently , and called on gubernatorial candidate Mastriano to work with Oz to change things.

Trump, who’s Mar-a-Lago property was recently raided by the FBI, called Biden an ‘enemy of the state’ at a Pennsylvania rally 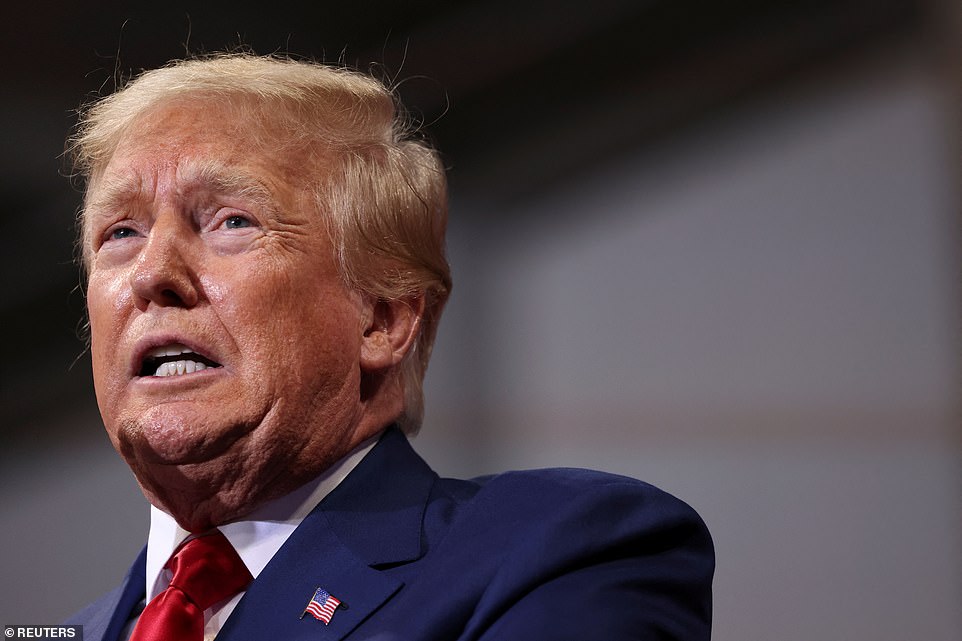 Trump, who’s Mar-a-Lago property was recently raided by the FBI, instigated chants of ‘lock her up’ when he spoke again about Hillary Clinton’s emails 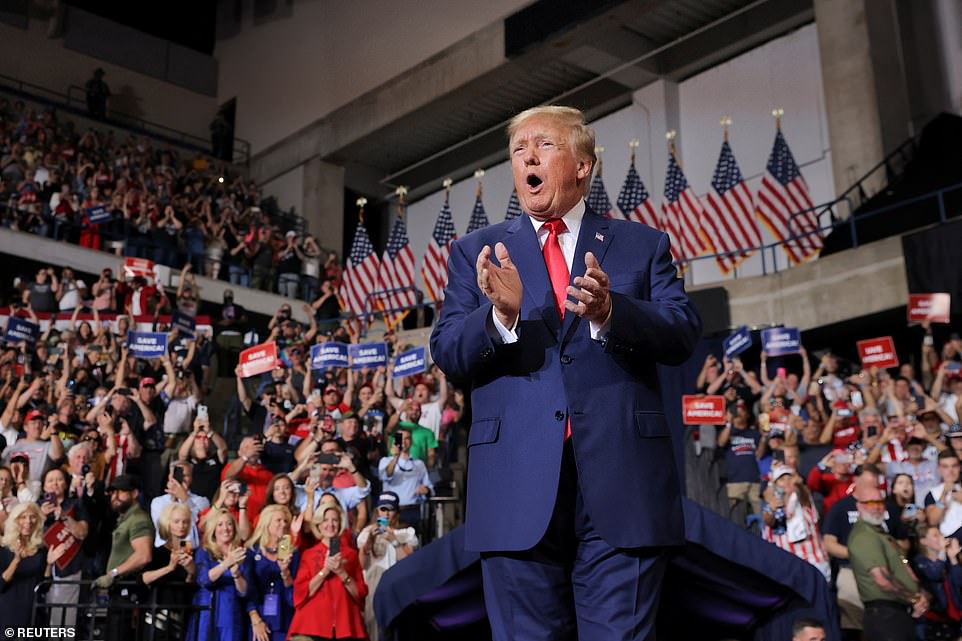 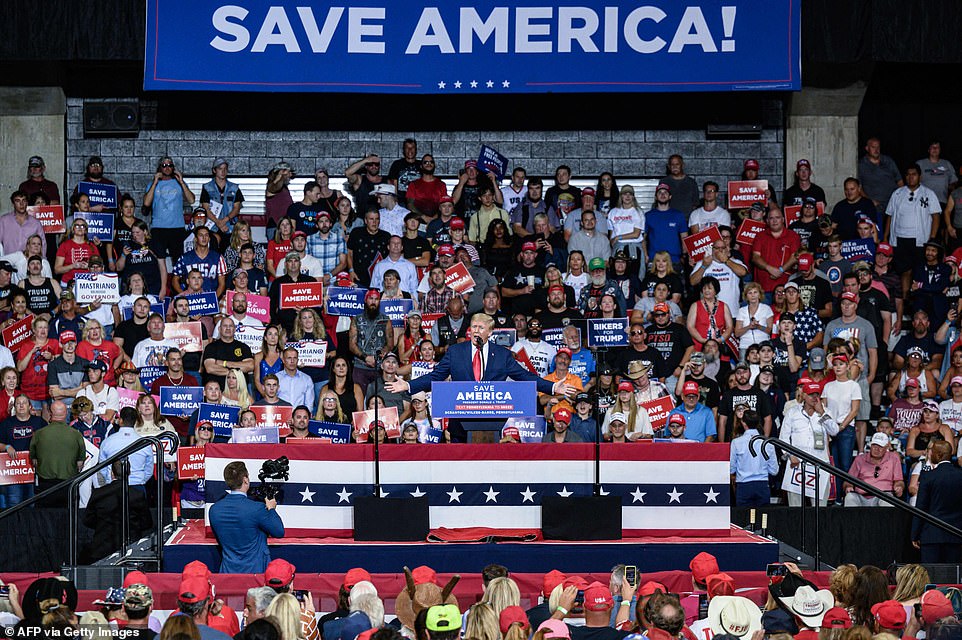 ‘By the way, by the next morning he forgot what he said,’ Trump quipped about Biden’s speech to a raucous applause 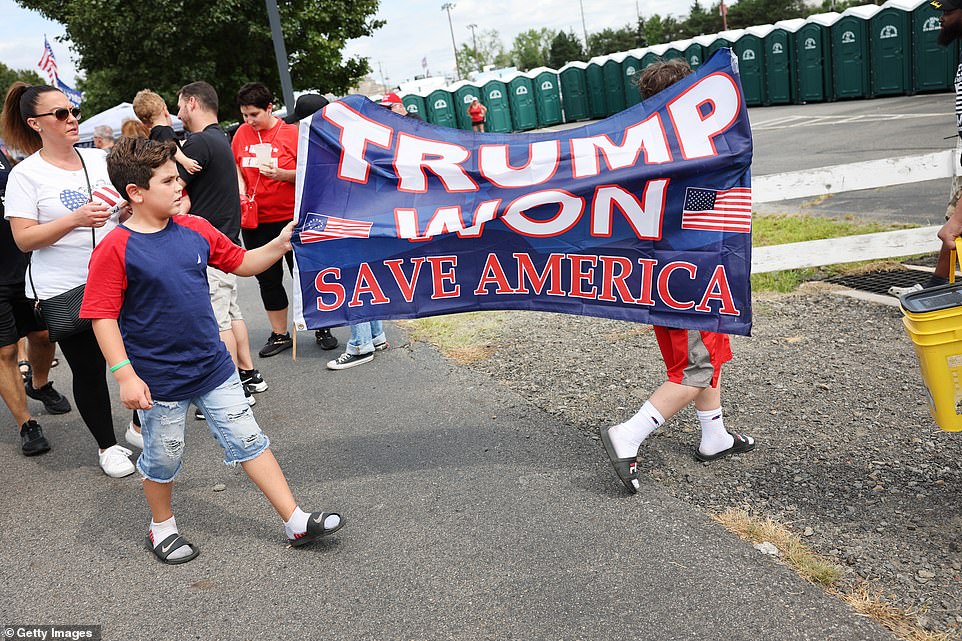 Supporters gathered in Wilkes-Barre, Pennsylvania for Trump’s campaign-like speech where he hinted at another presidential run 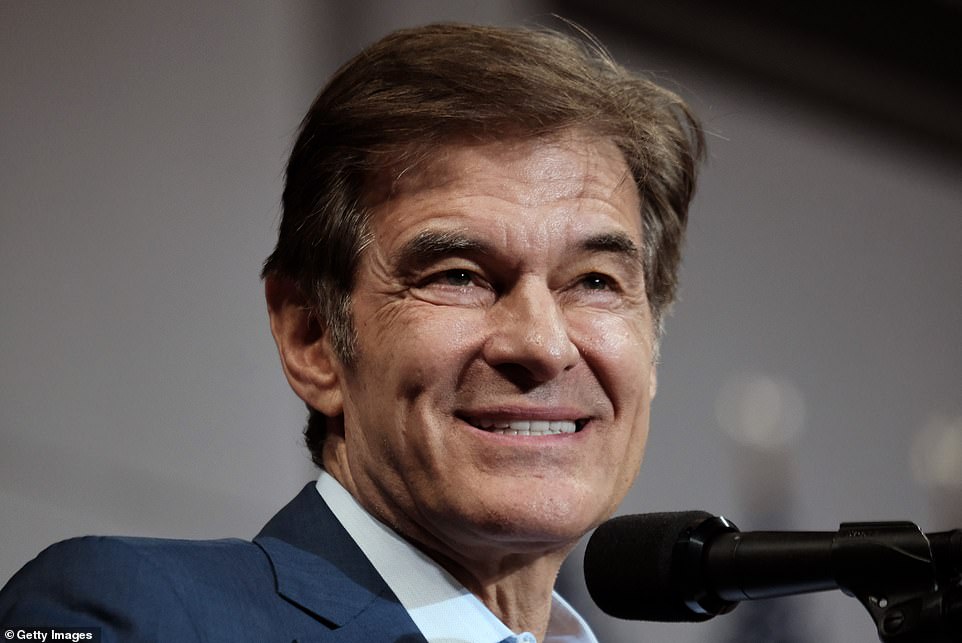 Trump was in the state to stump for Senate candidate Dr. Oz and called his opponent John Fetterman a ‘spoiled and entitled socialist loser who leeched off his parents money’ 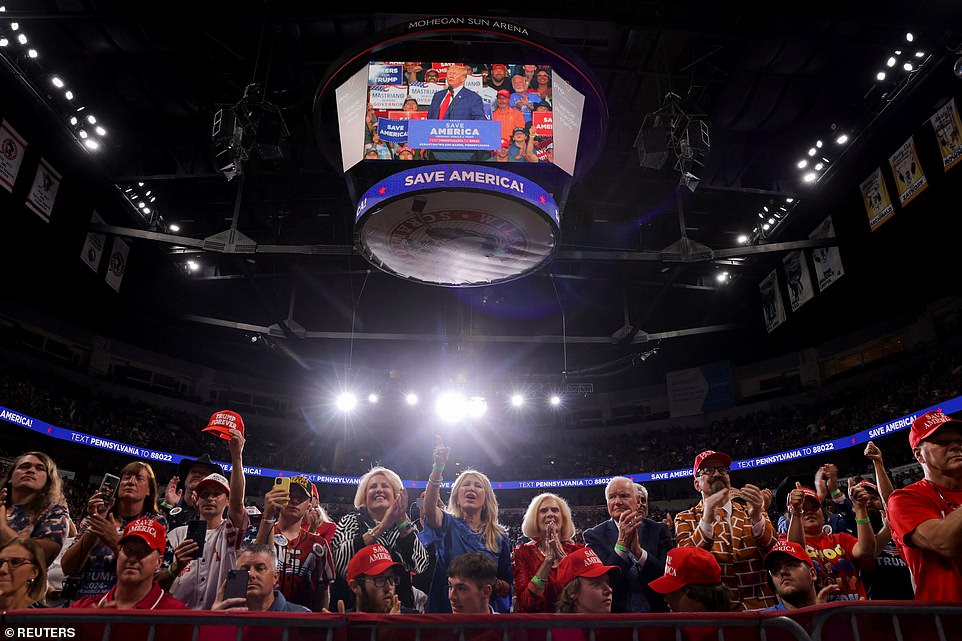 On Thursday, Biden gave a major speech at Independence Hall in Philadelphia where he launched an incensed attack on Trump and accused him of ‘destroying American democracy’.

Biden also branded him – and MAGA Republicans who follow him – as ‘extremism that threatens the very foundations of our republic’.

Trump referenced Biden’s controversial remarks on Saturday and said Philadelphia, considering the state of the city, was a perfect place for Biden to give such a divisive speech.

‘I think Philadelphia was a great choice to make this speech of hatred and anger,’ he said.

‘By the way, by the next morning he forgot what he said,’ Trump quipped to a raucous applause.

The former president stoked an old flame when he slammed Hillary Clinton during the speech, instigating chants of ‘lock her up.’

After she set up a secret, illegal server to hide her family’s pay-for-play schemes… and then deleted, acide-washed 30,000 emails,’ he said.

He took time to give his opinion on Oz’s opponent John Fetterman, calling him a ‘spoiled and entitled socialist loser who leeched off his parents money.’

He also took aim at former President Barack Obama, remarking ‘They say he’s so handsome. They say he’s such a great speaker. What does he say? He says nothing.’ 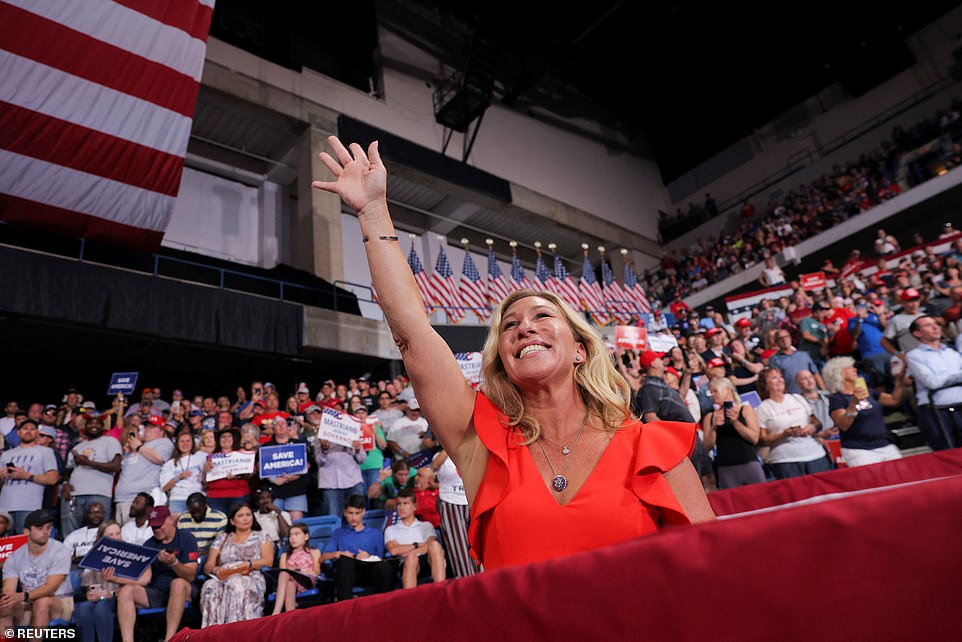 He was joined by fellow Republican heavyweights such as Georgia Rep. Marjorie Taylor Greene 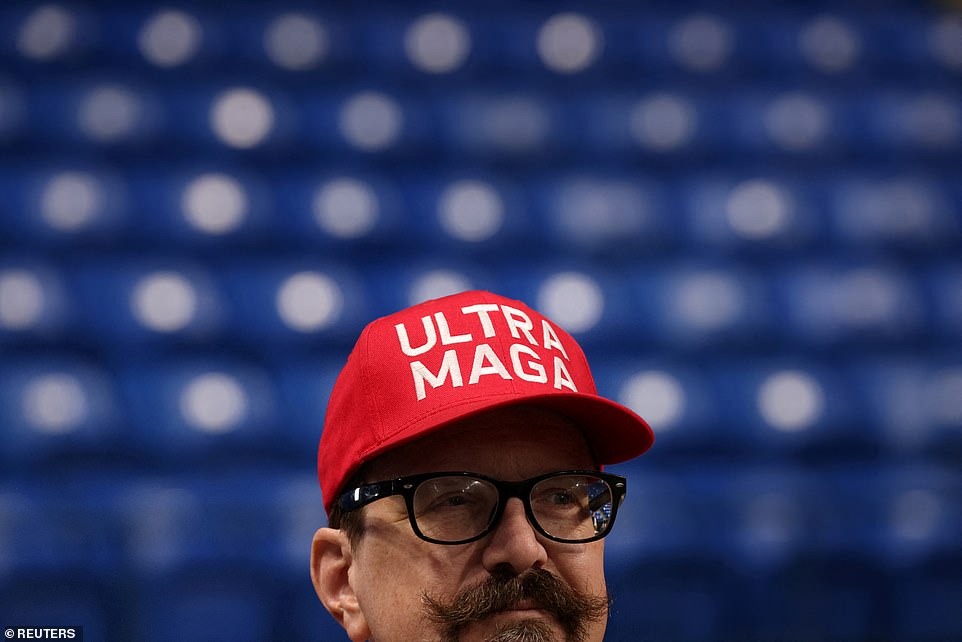 A person in an “Ultra MAGA” hat waits ahead of a rally by former U.S. President Donald Trump in Wilkes-Barre 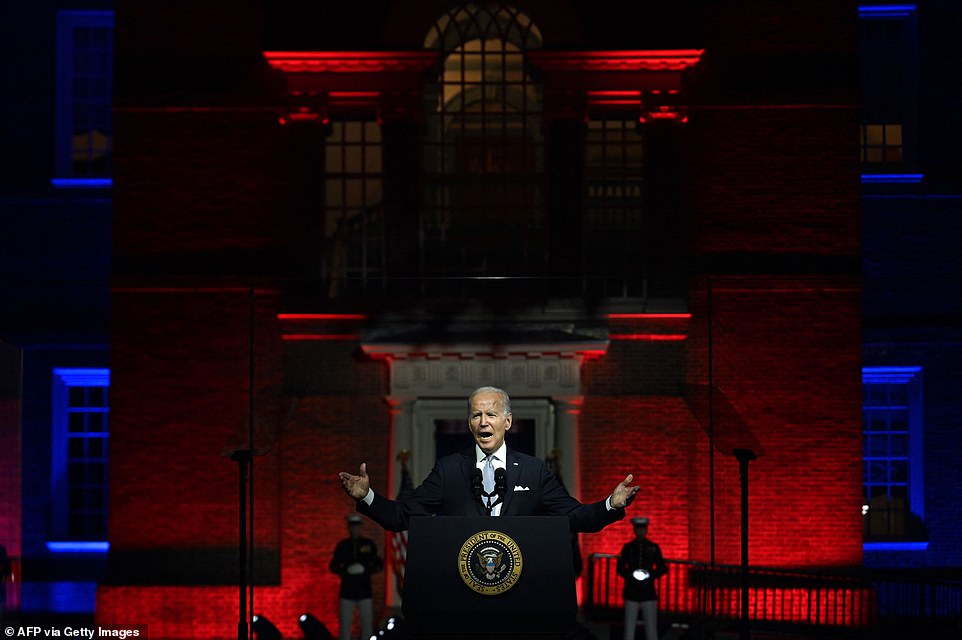 Standing on the darkened stage with ominous red lighting, the Biden called Trump out by name and slammed him for promoting the claim the 2020 election was stolen.

Although he made it clear he doesn’t think every Republican is ‘extreme’ or a threat, he said ‘there’s no question that the Republican party today is dominated, driven and intimidated by Donald Trump and the MAGA Republicans.’

‘And that is a threat to this country,’ he added. ‘Too much of what’s happening in our country today is not normal.’

Trump quickly hit back at the speech on his Truth Social, posting: ‘Someone should explain to Joe Biden, slowly but passionately, that MAGA means, as powerfully as mere words can get, MAKE AMERICA GREAT AGAIN!

‘If he doesn’t want to Make America Great Again, which through words, action, and thought, he doesn’t, then he certainly should not be representing the United States of America!

‘If you look at the words and meaning of the awkward and angry Biden speech tonight, he threatened America, including with the possible use of military force. He must be insane, or suffering from late stage dementia!’

He also shared an uncaptioned image of Biden with the dark red lighting on the stage with his arms raised in fists next to a picture of himself kissing the American flag.