Donald Trump has falsely claimed that his tumultuous first debate with Joe Biden on Tuesday was the most watched event in the history of cable TV – despite figures showing 13 percent slump in viewership compared to 2016.

Trump first made the false claim in a tweet and then again later during a campaign rally in Duluth, Minnesota, on Wednesday night.

The incumbent president told the large, jubilant crowd gathered Minneapolis-St. Paul International airport that the debate ‘had the highest ratings in the history of cable television.’

He also asserted the event – since branded a ‘dumpster fire’ and ‘national disgrace’ by critics – ‘had second-highest ratings of overall television in the history of television.’

Stats show that an average of 73,123,000 viewers tuned in across 16 TV networks from approximately 9pm to 11pm EDT to watch Biden and Trump on Tuesday.

Comparatively, 84 million tuned in across 13 networks to watch Trump’s match-up with Clinton four years ago. 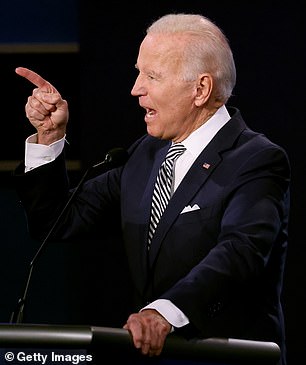 The first presidential debate between President Donald Trump and Joe Biden likely attracted a much smaller audience than the record set four years ago. But Trump said Wednesday that figures were ‘very high’ 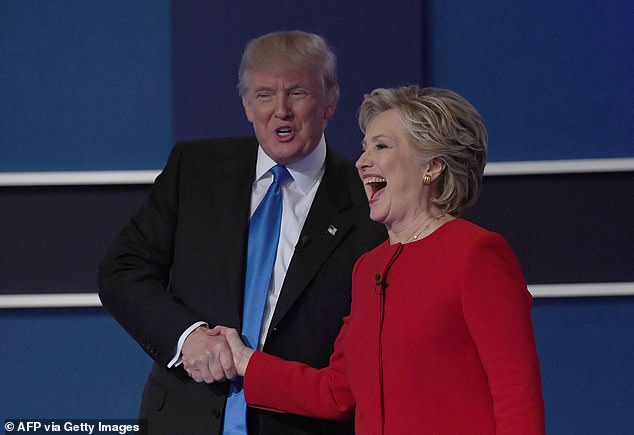 In 2016, 45.3 million viewers watched the debate with Hillary Clinton on ABC, CBS, NBC and Fox but those channels only drew in 28.82 million for this year’s initial ratings

But despite the dip in viewership, Trump spent the majority of Wednesday insisting the programming still received ‘tremendous reviews’.

‘I think the debate last night was great. We’ve gotten tremendous reviews,’ Trump said on the lawn of the White House Wednesday afternoon. ‘I see the ratings were very high.’

During his rally on Wednesday, Trump opened the event with another lie that had been disproven before he even told it.

‘Joe Biden lost badly. He should cancel the rest of his debates. Now I understand that he is going to cancel the debates,’ Trump claimed.

However, just hours after Tuesday’s chaotic debate, Biden’s campaign pledged the former vice president would appear at both the forthcoming face-offs between the candidates slated for next month.

Furthermore, Biden does not have the authority to cancel presidential debates.

‘Liberal media is upset that I took the fight to Biden and exposed his very dangerous agenda,’ Trump told the crowd. ‘Arson is OK, but challenging Sleepy Joe is totally off limits.

‘Now I understand he’s canceling the debates, let’s see what happens. I think that’s not going to be a good move.’ 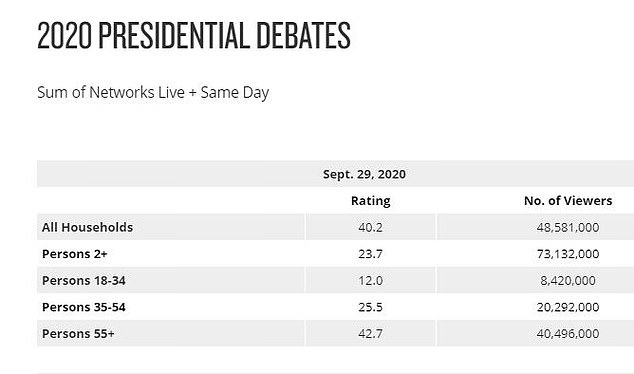 Although Tuesday’s debate fell short of 2016’s numbers, with the exception of Clinton v Trump, only one other debate in the past 45 years has drawn in more viewers: the 1980 presidential parley between Ronald Reagan and Jimmy Carter 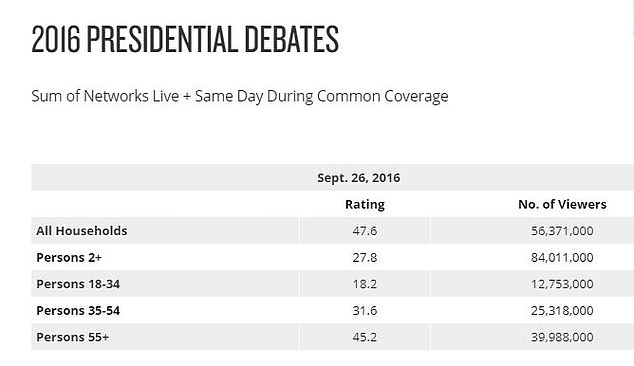 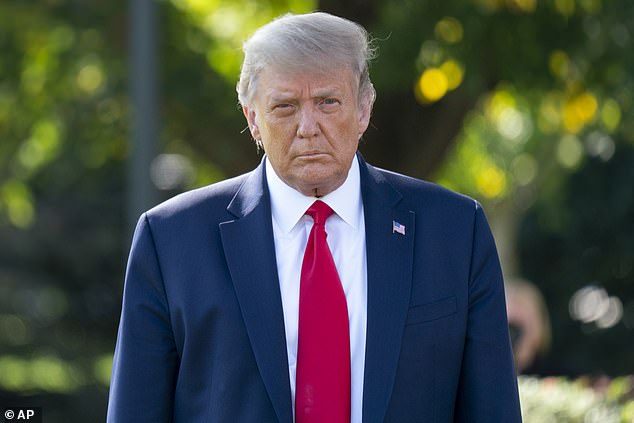 Although Tuesday’s debate fell short of 2016’s numbers, with the exception of Clinton v Trump, only one other debate in the past 45 years has drawn in more viewers: the 1980 presidential parley between Ronald Reagan and Jimmy Carter, which landed an audience of 80.6 million.

Tuesday’s debate was also the most watched event on American TV since the Super Bowl last February (100 million).

Fox News was the most watched of all the networks, drawing in 17.8 million, followed by ABC with 12.6 million, NBC with 9.7 million and CNN with 8.3 million.

It was one of the biggest nights in Fox News’s history, second only to the first Republican primary debate in 2015, which landed an audience of 24 million.

The Nielsen numbers, released on Wednesday, do not include people who streamed the event or watched it online – a habit more common now than it was in 2016 – meaning viewership was likely significantly higher.

Papers and news outlets across the globe slammed the debate as a ‘shame’, a ‘chaotic spectacle of political theater’, and Trump’s potential re-election ‘the first line of America’s obituary’.

CNN’s Jake Tapper candidly summarized the event as a ‘hot mess inside a dumpster fire, inside a train wreck’. He called the debate the ‘worst I have ever seen’ and said the biggest loser by far of the tumultuous 90 minute ordeal was the American people.

His co-host Dana Bash offered an even more frank assessment, describing the proceedings simply as ‘a s**t show’.

Meanwhile, veteran commentator Andrea Mitchell said on NBC that the debate was ‘such a hot mess’ – criticizing the format which allowed Trump to hector both Biden and Wallace.

‘You have to fault the moderator and the way the questions were posed once President Trump was rolling over them and bulldozing them, because they didn’t talk about Covid nearly as much as race and violence and protest,’ she said.

‘It was really in the ball park of the president because he kept bringing things back to that issue and not letting Joe Biden answer a question.

‘So by blowing it all up and running roughshod over everyone else, he didn’t let Joe Biden make the points that he was prepared to make.’

MSNBC host Rachel Maddow said that ‘this sort of debate shouldn’t happen in a democracy’.

‘What happened on that debate stage was unlike anything that has happened on a presidential debate stage ever before,’ she said, calling Trump’s performance a ‘monstrous cavalcade of increasingly wild and obscene lies’.

On CBS, political analyst John Dickerson said that ‘when the stakes were that high, the debate couldn’t have been lower’.

‘And it was not an equal opportunity experience. The president of the United States … was by far responsible for a greater share of the jaggedness of tonight at a time when America does not need jagged.’ 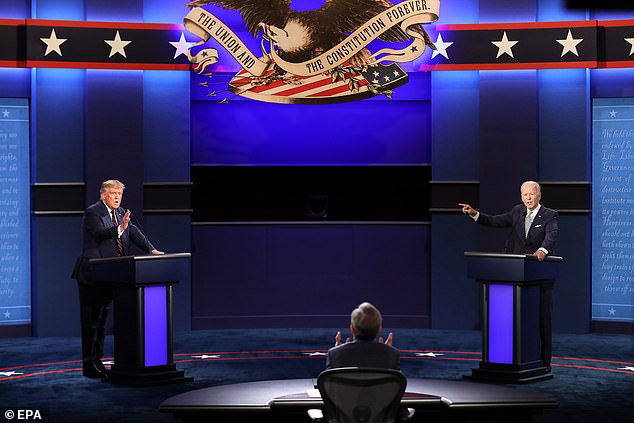 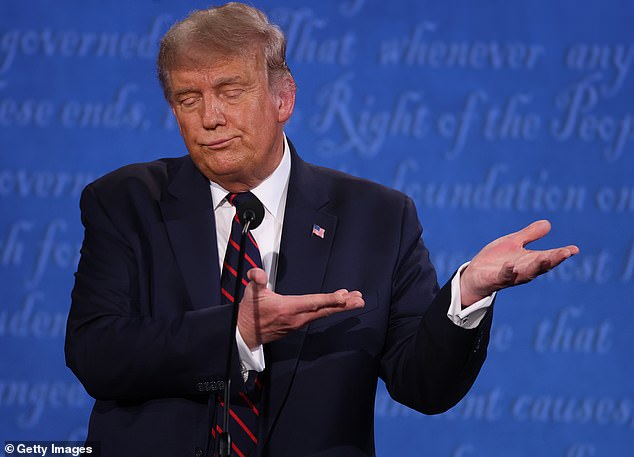 Barely had the night begun when the two candidates began name calling and fighting, with Biden asking Trump to shut up and slapping him down as the president repeatedly interrupted his answers.

‘Would you shut up, man?,’ a visibly exasperated Biden said about 20 minutes into the debate after Trump interrupted him again as he tried to talk about the Supreme Court.

And, about 15 minutes later during a discussion on the COVID pandemic, he told Trump again: ‘Would you just shush for a minute?’

The president tried to command the stage from out of the box, interrupting his rival repeatedly to make his point, counter Biden, and push himself into the conversation.

It happened so many times that Fox News’ Wallace stepped in, asking the president to let Biden finish his answer.

‘I’m the moderator of this debate and I would like you to let me ask my question and then you can answer,’ Wallace said told Trump.

‘Go ahead then,’ Trump said and then later adding to Wallace: ‘I guess I’m debating you, not him. No surprise.’

At other points, Biden called Trump a ‘clown’ and a ‘liar’; Trump, meanwhile urged Biden to never ‘use the word ‘smart’ with him, saying: ‘There’s nothing smart about you Joe.’

If the 2020 debates follow 2016’s pattern, viewership will drop off in the next two events, which are scheduled to take place on October 15 and October 22.

After the record 84 million viewers for the first Trump-Clinton encounter, the second 2016 presidential debate drew 66.5 million viewers, with the third experiencing an uptick to 71.6 million.

Following the chaos of Tuesday’s proceedings, commentators have called for the next two debates to be shelved. Others, including 2016 Republican presidential debate moderator Megyn Kelly, are suggesting giving the moderator the power to cut off debaters’ microphones.

The Commission on Presidential Debates, the body in charge of selecting moderators and overseeing the events, issued a statement Wednesday saying it would considering implementing changes for future debates to ‘ensure a more orderly discussion of the issues.’

The CPD also expressed gratitude to Wallace for ‘the professionalism and skill’ he brought to the event.

A Wednesday report by CBS News claimed that the CPD is planning to ‘issue strict new rules in the coming days that include cutting off a candidate’s microphone if they violate the rules.’