True blue Aussie bushman and rodeo champ, 75, is fined $100 for carrying a POCKET KNIFE on his belt – despite doing so every day since the age of 14

An elderly bushman who has carried a tiny pocket knife for more than 60 years was charged and forced to face court after possessing the item in public.

Wayne McLennan, 75, is a local legend in his hometown of Chinchilla, Queensland, where he the former rodeo champion is affectionately known as ‘Cowboy’.

But last month, when heading home from the local pub, Mr McLennan was stopped and breathalysed by police, before being taken to the station after blowing slightly over the limit.

After producing a second test under the legal blood alcohol level, the policewoman informed him he would be getting charged for another crime.

‘While I was there she said ‘but I am going to charge you for wearing a pocket knife in public’. I said “what? I didn’t know you weren’t allowed to wear one”,’ he told A Current Affair.

Mr McLennan said he has been going about his business on his farm and in town with the tiny knife in his pocket for decades.

The blade, which barely measures more than an inch, is used for common jobs around the property and is a necessary part of every farmer’s toolbelt.

‘Well if I got to go and put a bale of hay out, I use it to cut the string and then open a bag of horse feed, use it to open the top,’ he said.

Cowboy was out in Chinchilla last month having a few beers at the pub with friends before he got some takeaways and headed back to his car.

Police stopped him before he even got in the car and said they were going to breathalyse him, where he blew over the legal limit.

The 75-year-old blew under the legal limit on his second attempt, but police still didn’t let him go.

Cowboy was charged with Section 51 of Queensland’s Weapon Act, which says a person mustn’t possess a knife in a public place or school unless they have a reasonable excuse.

The farmer said he ‘wouldn’t have had one on me if I’d known I wasn’t allowed to wear one’ and was shocked at the decision of the policewoman. 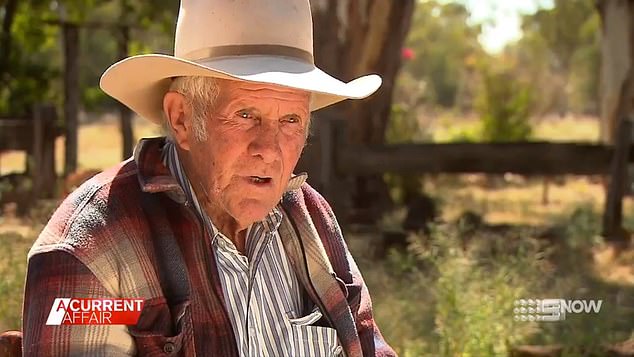 Mr McLennan faced local court where a magistrate fined him $100 and allowed him to leave without conviction.

He says no one around town could believe his story.

‘That’s why people keep ringing me and talking to me about it, they didn’t know whether it was true or false,’ he said.

Other bushmen around town have supported the 75-year-old, saying it was common place to innocently carry a small pocketknife.

‘Oh it’s ridiculous, every second guy here that walks into the pub here on a Friday night, has a pocket knife on their belt,’ fellow Chinchilla local Tom Latimore said.