The Prime Minister of Canada belted out the 1975 hit at an impromptu session in London’s swanky Corinthia Hotel – where suites go for at least $5,000 – while the UK and Commonwealth was in its official period of mourning.

Trudeau, 50, was one of the many world leaders who traveled to the United Kingdom to meet his new monarch, King Charles III and pay their respects to the Queen at the monumental funeral this morning.

Wearing a casual maroon t-shirt, Trudeau was seen standing over a piano during an ad lib singalong with other members of his formal Canadian delegation in the lobby of the central London hotel.

It’s understood that Gregory Charles, a renowned gospel musician from Quebec, was playing the keys while other guests and members of Trudeau’s entourage joined in on Saturday night.

Trudeau, who has become known for his woke virtue signaling politics, seemed oblivious to the solemn reason for his visit to London has he sang along with the lyrics: ‘Easy come, easy go. Little high, little low.’

‘TONE DEAF’: Canada’s Prime Minister has been slammed for singing Queen’s Bohemian Rhapsody with a pianist in the lobby of a central London hotel just two days before the Queen’s formal state funeral 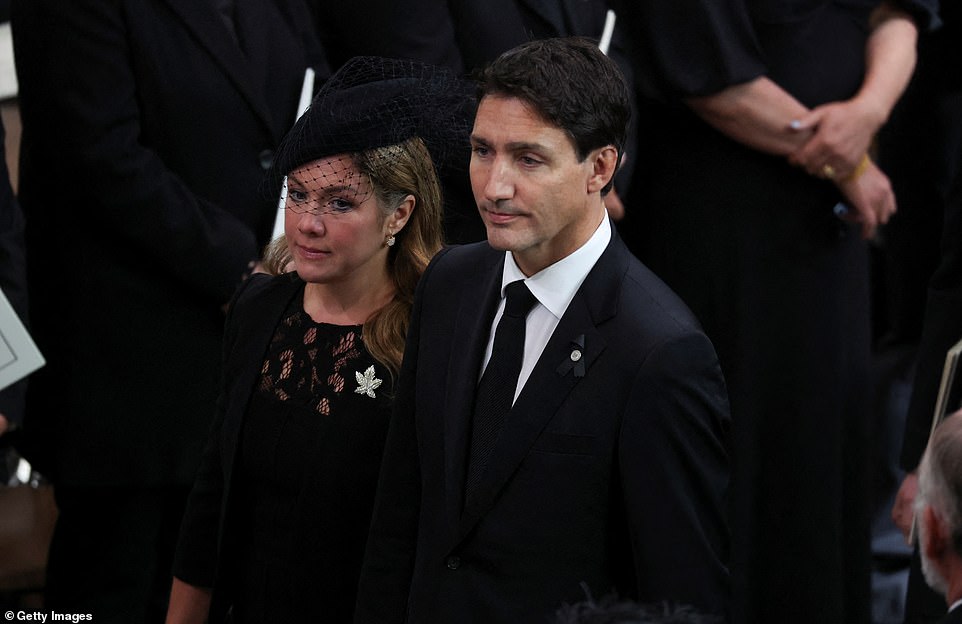 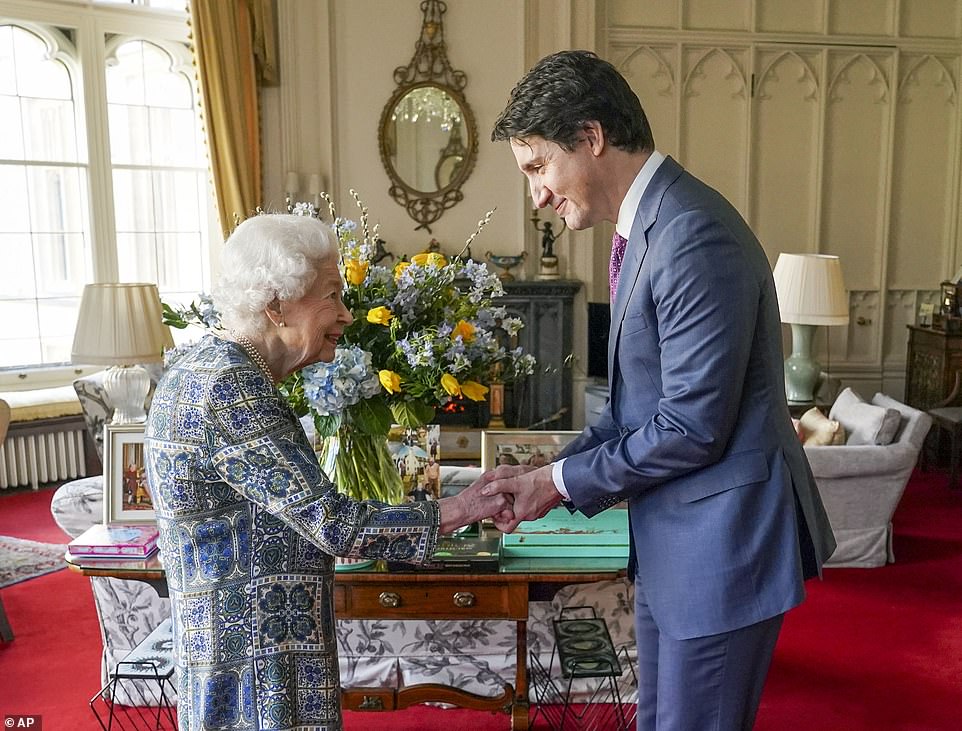 But Trudeau’s haughty harmonizing with the pianist on Saturday quickly went viral online.

It was filmed after the delegation – attended a dinner on Saturday night ahead of Britain’s most solemn day in living memory.

This is just one of a litany of gaffs by the woke world leader – who has admitted to dressing in blackface on a number of occasions as a younger man and spouting woke nonsense such as admonishing anyone saying ‘mankind’ and correcting them with the gender-neutral ‘peoplekind’.

The unearthed video has evoked fury across the world – as many slammed the premier for indulging partying less than 48 hours before the Queen’s funeral at Westminster Abbey. She served as Canada’s head of state for 70 years.

The beloved monarch died at the age of 96 on Thursday September 8, 2022 at Balmoral Castle in Scotland.

Trudeau previously heralded her as ‘one of my favorite people in the world’ after being pictured clutching her hands just six months ago during a heartfelt audience at Windsor Castle.

Upon watching Trudeau’s amateur dramatics, one furious person wrote online: ‘Curious as to how you can qualify this as paying tribute to the life and service of Her Majesty? Because they were singing music from Queen? That’s rather crass!’

Another fuming onlooker added: ‘Paying tribute? How tone deaf do you have to be to think this is somehow a tribute? This is an embarrassment.’

A third said of the former drama teacher: ‘Singing drunkenly is a ‘tribute’? What an embarrassment.’ There is no indication that the Prime Minister had been drinking before singing at the piano on Saturday night. 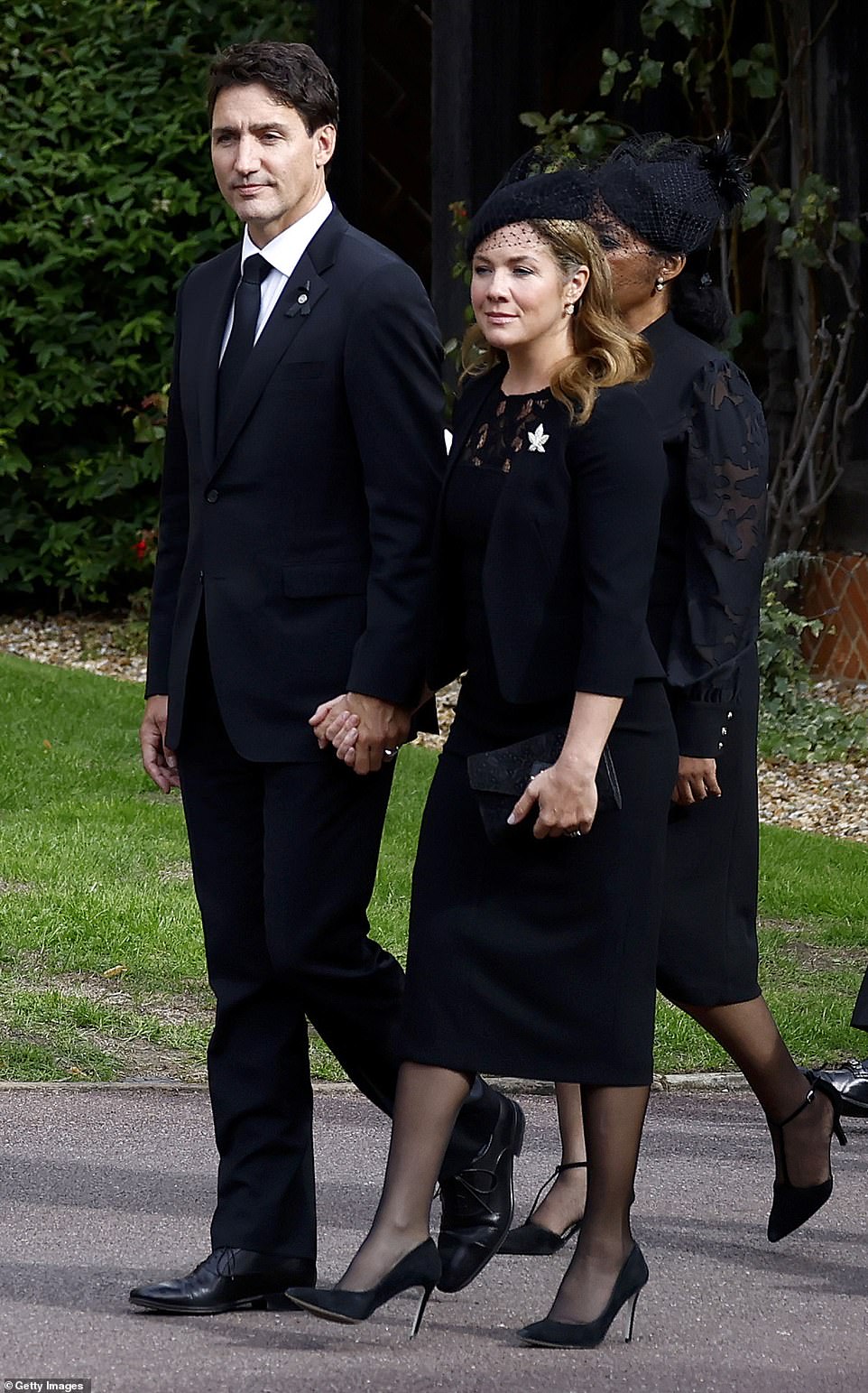 PICTURED TODAY: Trudeau and his wife Sophie, just two days after the premier was recorded singing at the hotel lobby 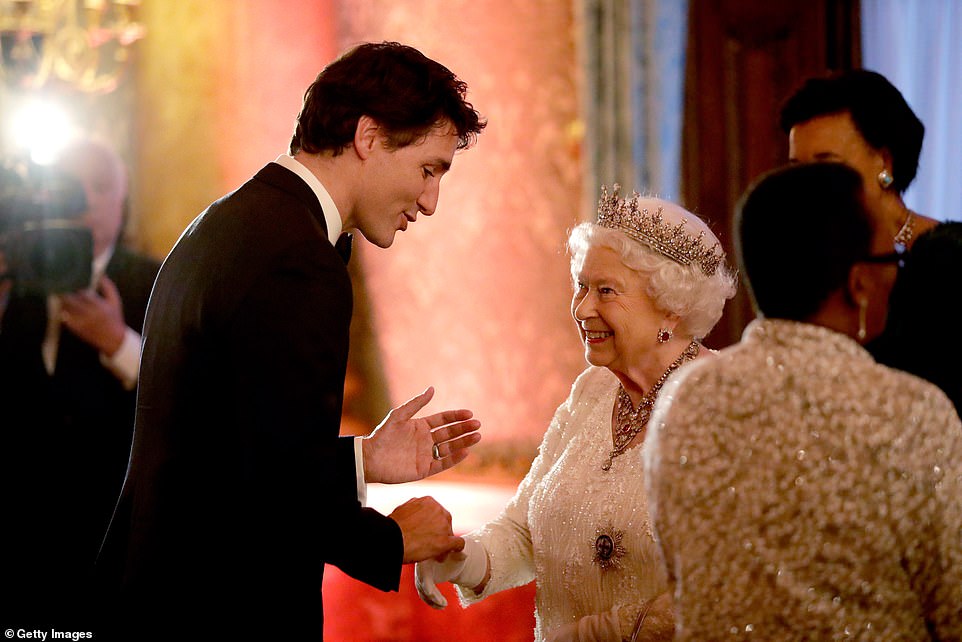 Queen Elizabeth greets Justin Trudeau in a receiving line for the Queen’s Dinner for the Commonwealth Heads of Government Meeting at Buckingham Palace on April 19, 2018 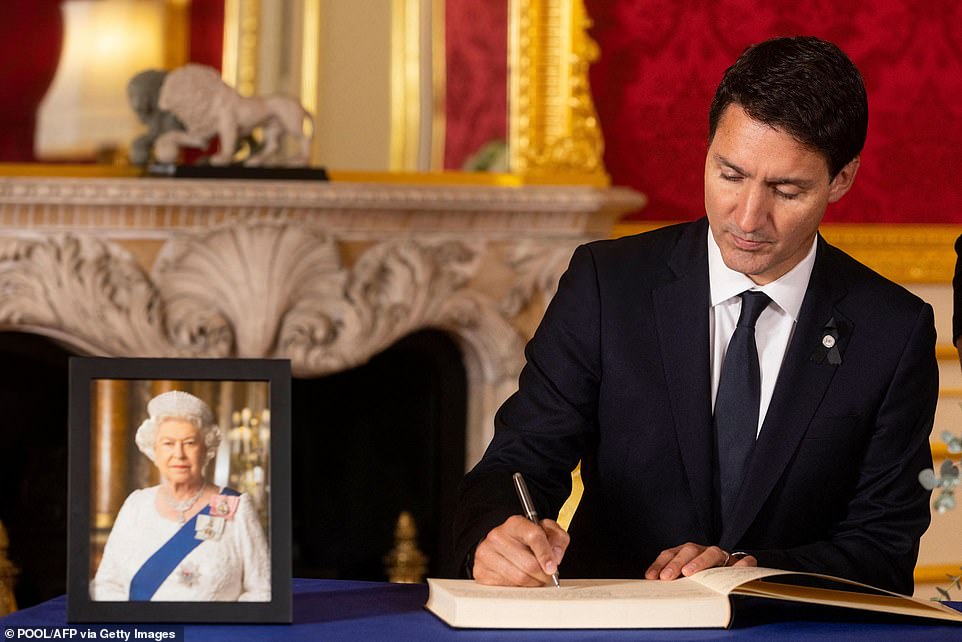 Trudeau signs a book of condolence at Lancaster House, in London in London on September 17, 2022, following the death of Her Majesty 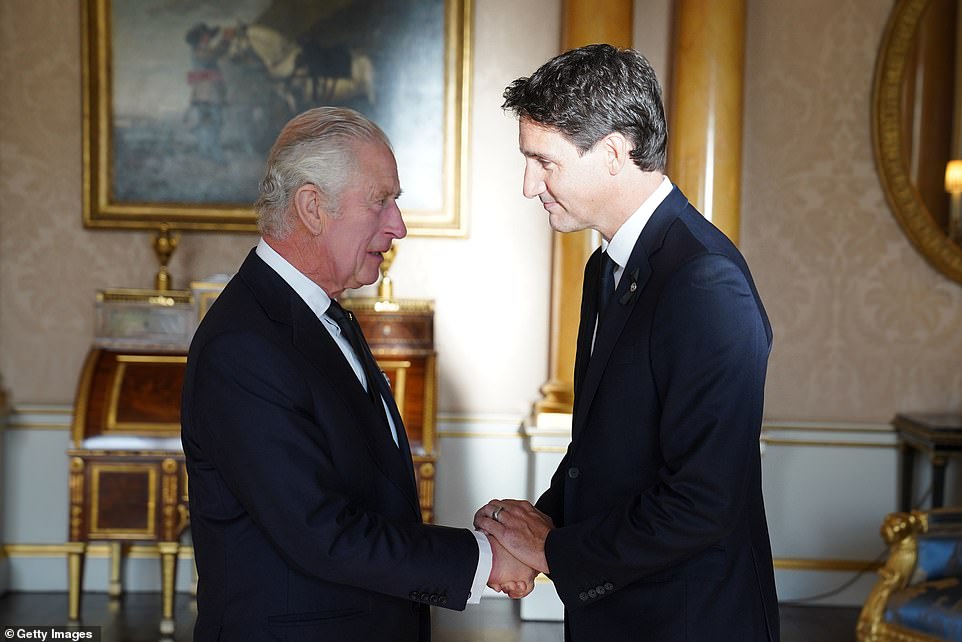 King Charles III sits with Justin Trudeau, as he receives realm prime ministers in the 1844 Room at Buckingham Palace on September 17, 2022 in London, England 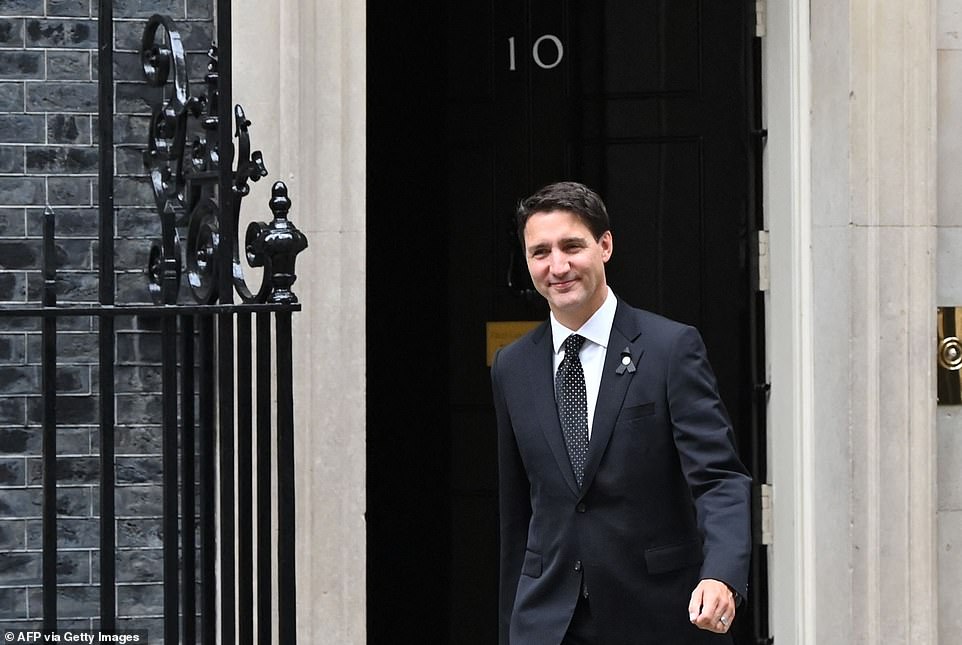 A fifth said: ‘Trudeau sure seems to have a heavy heart as he fools around at a bar last night. I thought he was in mourning?’

But other commentators saw no offence in Trudeau’s actions – believing that after over a week of mourning it was normal for those grieving to let off some steam.

One sympathetic person said: ‘I see no issue,’ while another added: ‘We are reaching here. I don’t see the big deal.’

Coming to his defense, another said: ‘You’re only annoyed of this because you don’t like Trudeau to begin with.

‘There is nothing wrong with him singing and being a normal person during the evening in a non-official event and setting. He’s the Prime Minister, but he’s not a robot.’

The Prime Minister’s spokesperson said: ‘After dinner on Saturday, Prime Minister joined a small gathering with members of the Canadian delegation, who have come together to pay tribute to the life and service of Her Majesty.

‘Gregory Charles, a renowned musician from Quebec and Order of Canada recipient, played piano in the hotel lobby which resulted in some members of the delegation including the prime minister joining.

‘Over the past 10 days, the Prime Minister has taken part in various activities to pay his respects for the Queen and today, the entire delegation is taking part in the State Funeral.’ 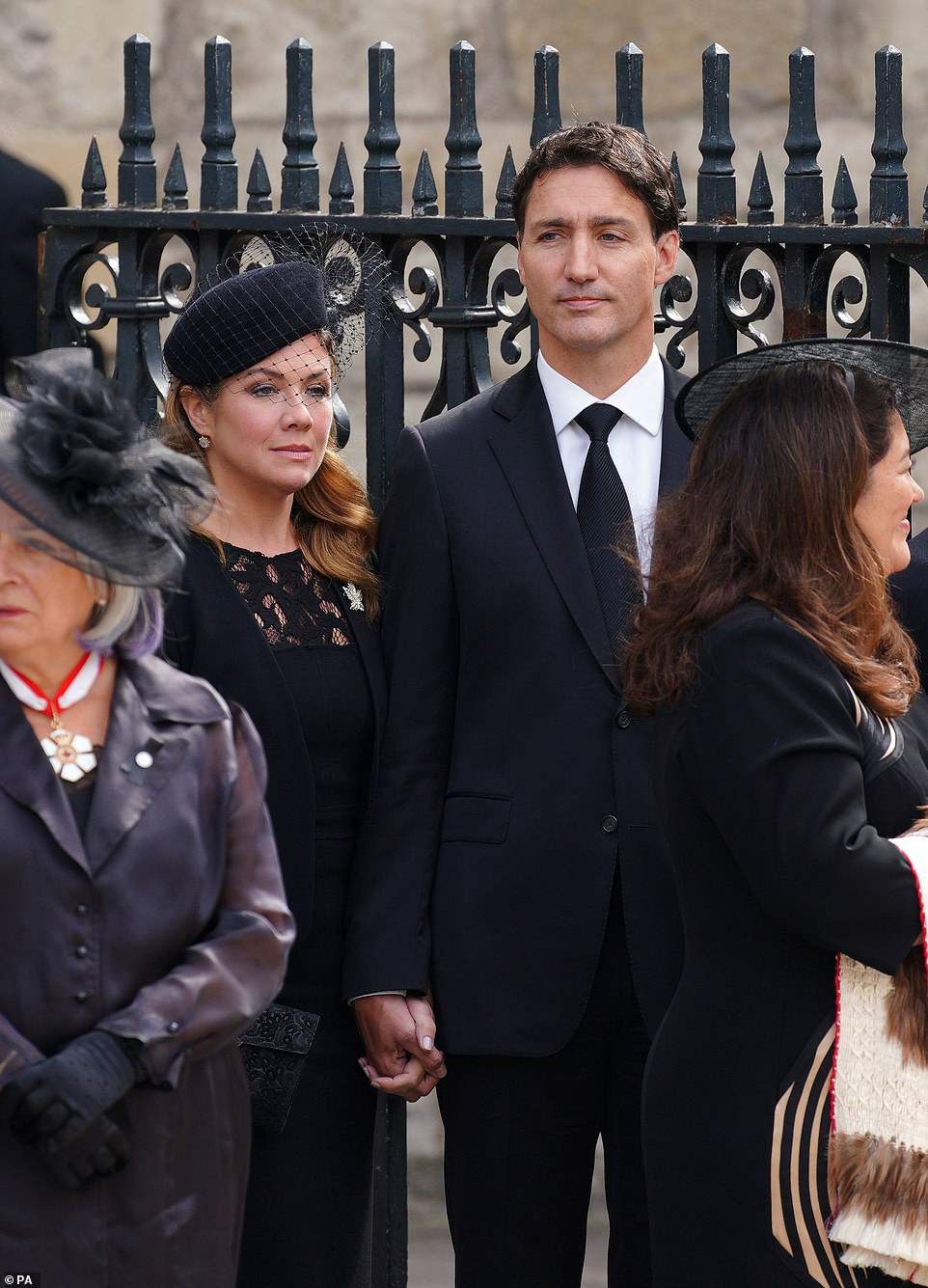 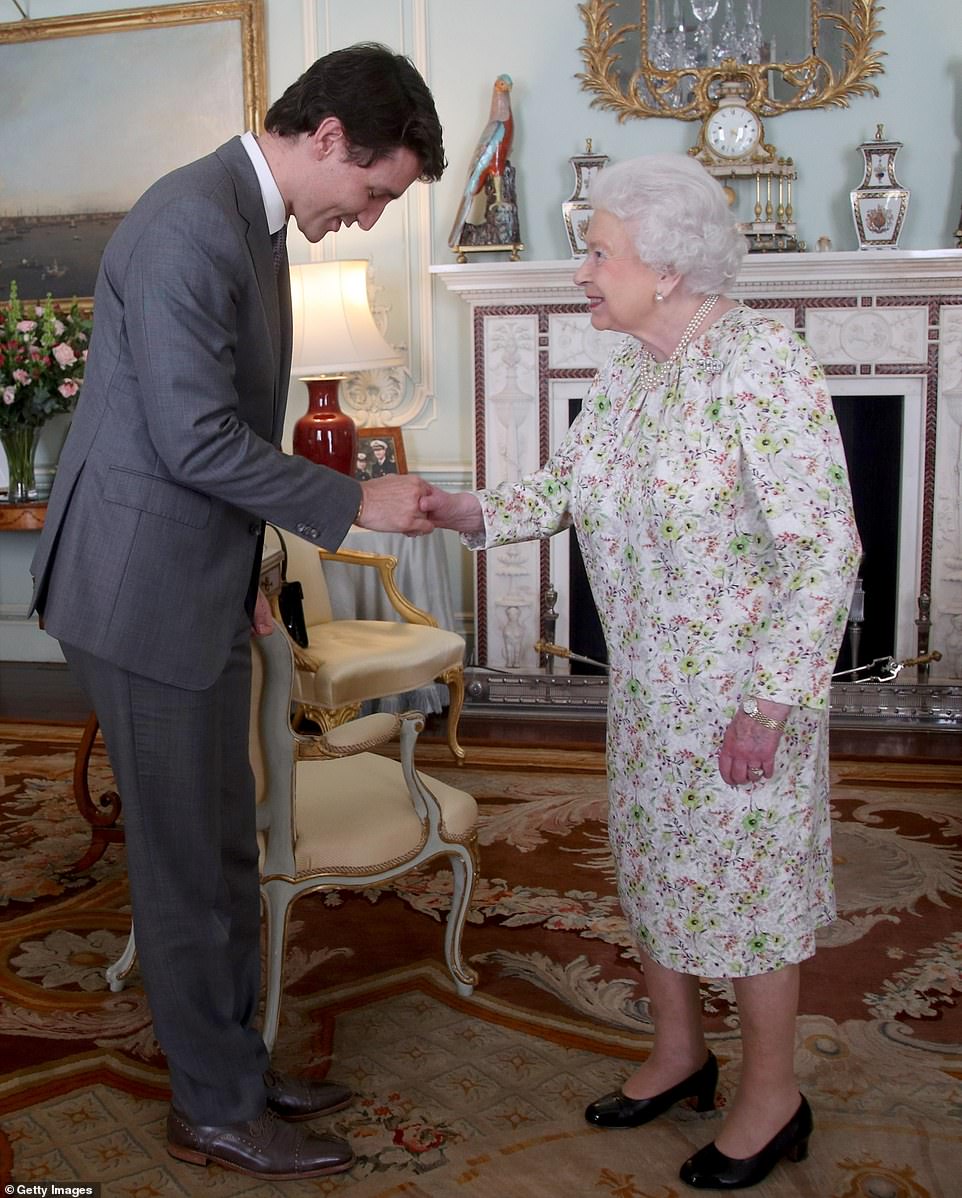 Canadian Trudeau shaking hands with the late monarch during a private audience at Buckingham Palace on April 16, 2018 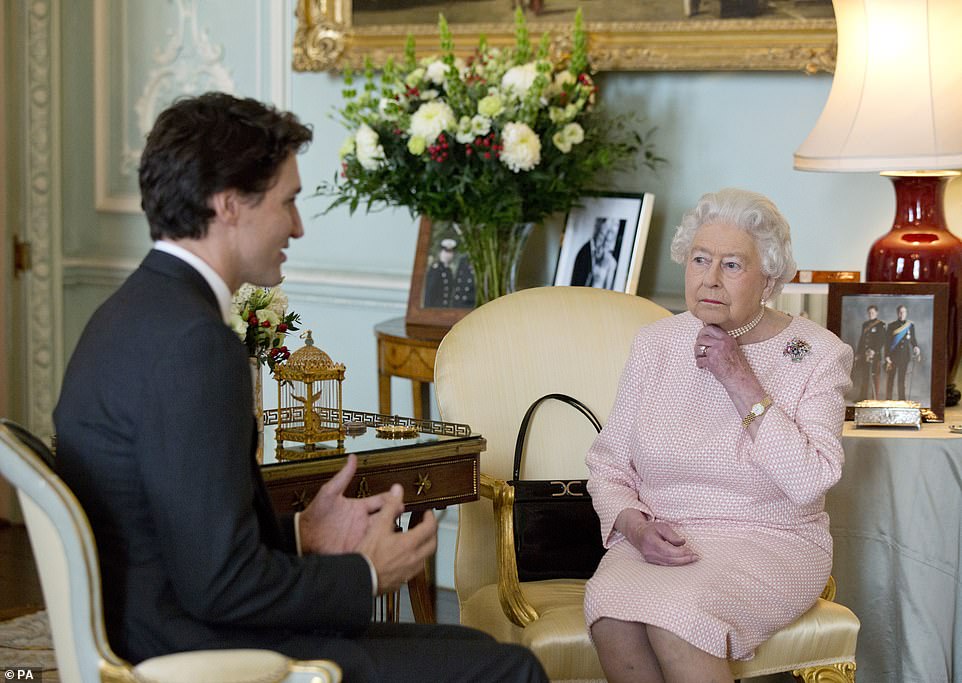 Some people slammed Trudeau for his actions – but others pointed out that he has been a dedicated PM to Canada’s former head of state, Queen Elizabeth II. Pictured, the pair in 2015 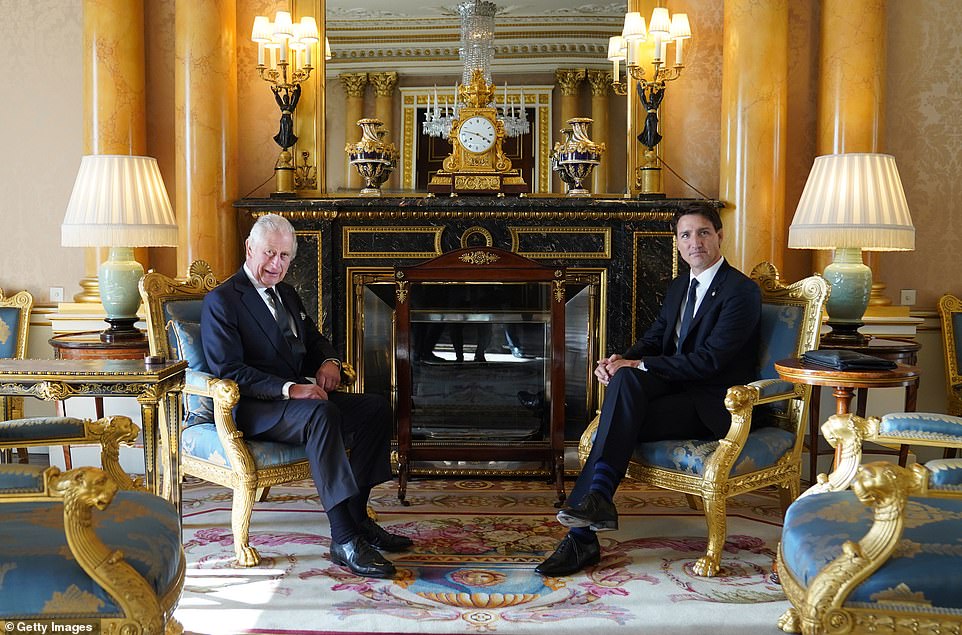 King Charles III pictured with Trudeau on September 17, 2022 – just hours before he was filmed singing songs in the London hotel lobby with his delegation

Trudeau, who has served as held office in Canada since 2015, has been at the center of multiple scandals – including when images of him in blackface were uncovered.

He made a series of apologies after the 2001 photograph of him emerged in brown face at an Arabian Nights party when he was a teacher. He also apologized for a high school incident where he dressed up as Harry Belafonte to sing the Jamaican song Day-O.

A video of him as a young man in blackface also emerged during the 2019 election. It shows him with a black face and raising his arms and sticking his tongue out while dressed in a white t-shirt and jeans.

At the time, he said: ‘I should have known better then but I didn’t, and I am deeply sorry for it.

‘I shouldn’t have done that. I take responsibility for it. It was a dumb thing to do.’

And in 2018, a report emerged that Trudeau, who was 28 at the time, had groped a female reporter while at the Kokanee Summit in Creston, B.C in 2000.

The woman, speaking in 2018 after the story resurfaced, said: ‘The incident referred to in the editorial did occur, as reported. Mr. Trudeau did apologize the next day. I did not pursue the incident at the time and will not be pursuing the incident further. I have had no subsequent contact with Mr. Trudeau, before or after he became Prime Minister.’

Trudeau also found himself in hot water in June 2020. The Canadian government announced the WE Charity would run a new grant program for students hit hard by the COVID-19 pandemic.

It later emerged that Trudeau had personal connections to WE and was involved in the decision-making process, without recusing himself.

A litany of gaffs: The scandals that have engulfed the world’s ‘most woke’ Prime Minister

Justin Trudeau has experienced a number of scandals and missteps since taking power in November 2015.

Canada’s Prime Minister first found himself in hot water with the ethics commissioner when it was discovered he’d broken conflict of interest rules by vacationing at the Aga Khan’s private island during Christmas in 2017.

The Aga Khan’s foundation is registered to lobby the government. In addition, Trudeau also traveled in the Aga Khan’s private helicopter. Trudeau admitted his mistake. 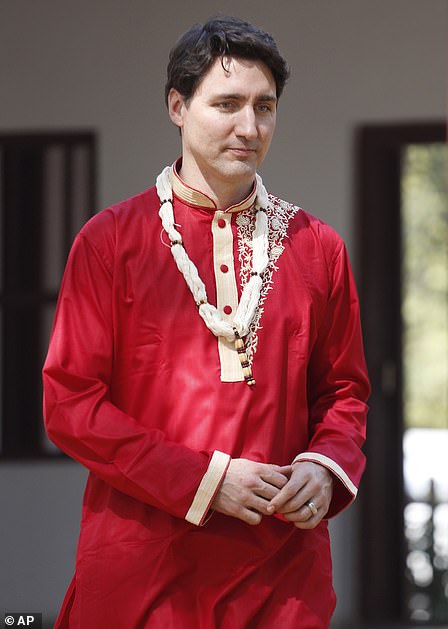 While this is not an ethics scandal, Trudeau found himself being mocked after he proudly dressed in various local costumes during a trip to India in February of 2018.

Also during the trip, Trudeau’s wife, Sophie, was photographed with a man named Jaspal Atwal at a reception in Mumbai.

In 1986, Atwal was convicted of the attempted murder of an Indian politician, which led many to question why he was at the reception in the first place.

In 2018, news emerged that Trudeau allegedly ‘groped’ a young woman at a music festival in British Columbia 18 years ago. When a reporter brought up the allegations at a steel and aluminum workers at Regina in western Canada, Trudeau  said he did not recall the event.

‘I remember that day in Creston well. It was an Avalanche Foundation event to support avalanche safety. I had a good day that day. I don’t remember any negative interactions that day at all,’ Trudeau, who has a ‘no tolerance’ for sexual harassment, told reporters.

Trudeau later apologized to the woman in question ‘in the moment,’ despite commenting that he was confident he ‘did not act inappropriately.

In September 2019, photos emerged of Trudeau wearing blackface at the Arabian Nights party in 2001 and also referred to a high school incident where he dressed up as Harry Belafonte to sing the Jamaican song Day-O. A video also emerged around this time of Trudeau in blackface at a separate event.

Trudeau said his behavior had been ‘unacceptable’ and that he has enjoyed ‘layers of privilege’ in his life. He also  said he took ‘full responsibility’ for the scandal.

In June 2020, the Canadian government announced the WE Charity would run a new grant program for students hit hard by the COVID-19 pandemic.

It later emerged that Trudeau had personal connections to WE and was involved in the decision-making process, without recusing himself. 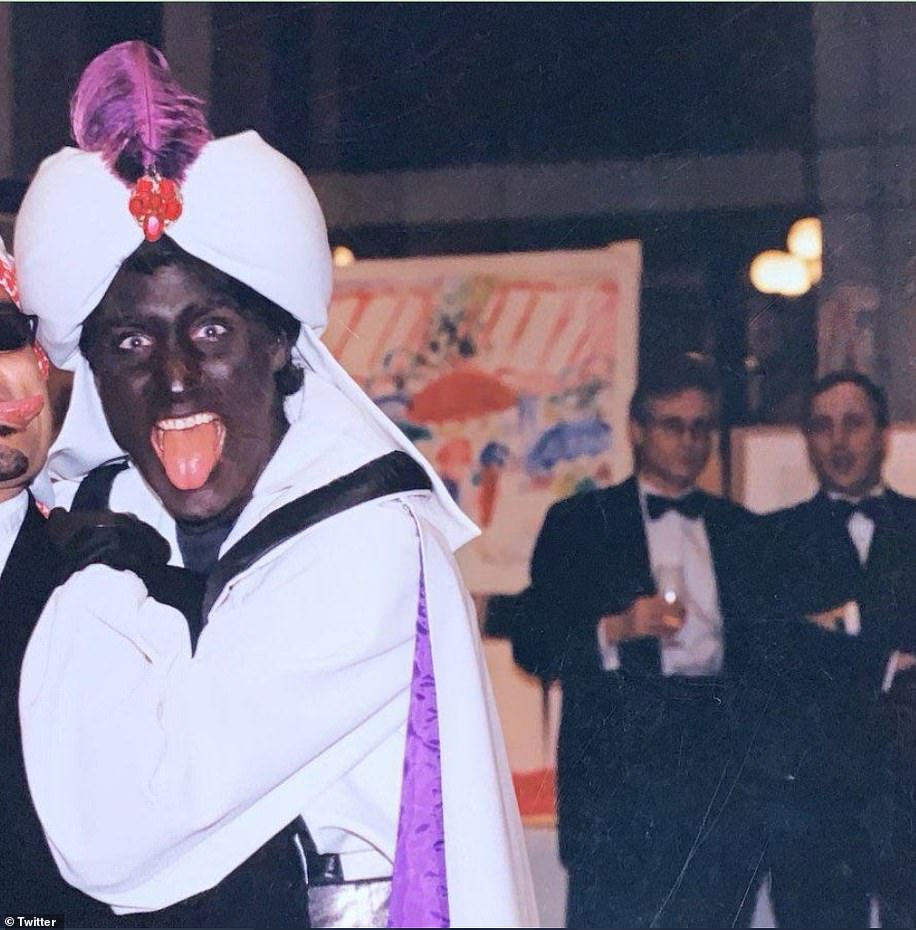 One night before the Canadian Federal Election in 2021, a new photo has emerged of the Canadian Prime Minister Justin Trudeau in blackface