Move that TRUCK! Heated moment an angry woman confronts a truck driver with a stick after his vehicle blocked her from leaving a car park

A fiery war of words has erupted between a furious Aussie woman and a truck driver after she claimed his huge vehicle blocked her from leaving a car park.

Footage of the incident uploaded to TikTok shows the woman waving a large stick at the truckie while yelling, ‘get your f***ing truck out of the way’ as she walks through the car park towards his vehicle.

The truckie fired back, saying: ‘Yeah, put that stick down, alright? I feel threatened, and I will react in self-defence.’ 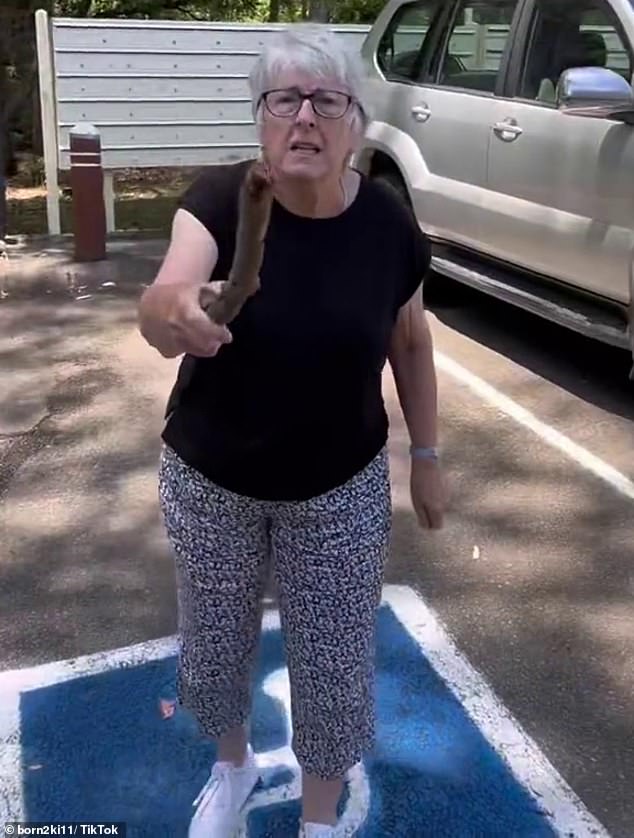 She shoots back: ‘Oh, you’re gonna call the police are you?’

The truckie said: ‘Yeah I will call the police. I’m not taking sh** from an old lady. Put that stick down, I feel threatened.’

The woman continued to wave the stick around and yelled ‘good’.

‘I’m going to report you to the police,’ she said.

The truckie then scoffed, replying: ‘Report me to the police? You just smashed the side of my truck with the stick.’

The woman denied that she’d damaged the truck while pointing the stick at the driver.

‘I’d love to hit you with the stick,’ she said.

The truckie snapped back, saying: ‘You should’ve just stayed in your f***ing car.’

Many Aussies were quick to defend the woman.

‘To be fair don’t park your truck across the back of car parks at a local duck park,’  one said.

‘Trucks should NEVER be allowed in car parks. They’re far too big and often block other vehicles from leaving’ another said.

Others claimed the woman had overacted to the truck driver’s parking blunder.

‘She is acting like a child. If she had asked nicely without waving a stick she could have avoided the confrontation.’