Triple M host Gus Worland was rushed to hospital in Orange, New South Wales on Saturday night, after attending a fundraiser for his charity Gotcha4life.

The radio star, 52, fell ill with a hernia and had emergency surgery on Monday.

Gus will remain in Orange Hospital for a few days.

Gus shared a selfie from his hospital bed to Instagram on Monday, updating his fans.

‘What started with a fundraiser for my foundation @gotcha4life in @visit_orange at the mighty @orangeemusrugby on Saturday night turns into an emergency hernia operation-brilliant staff. Here for a few days,’ he wrote online. 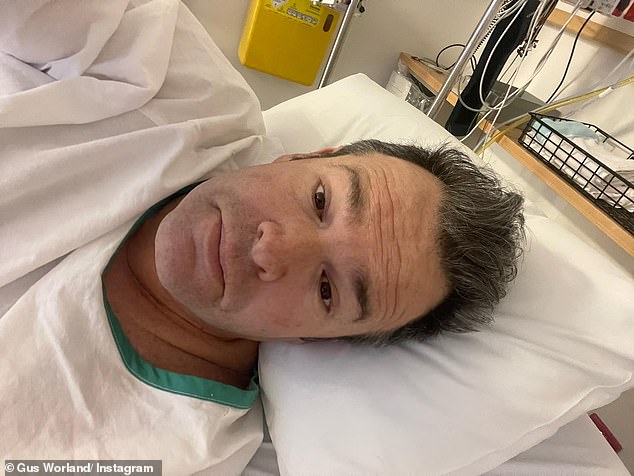 On the mend: The radio star, 52, shared a selfie from his hospital bed on Monday and revealed he had emergency surgery for a hernia. He will remain in hospital for a few days

Their goal is to achieve ‘zero suicides by delivering mental fitness programs that engage, educate and empower local communities’.

Gus has made it his mission to raise community awareness of the dangers of neglecting mental health.

In August, Gus made a controversial appearance on the Today show where he claimed more Australians were taking their own lives than dying of Covid-19.

Gus said the battle to control Covid-19 was resulting in more suicides than the virus was taking lives, and demanded leaders get harder on enforcement.

‘Their numbers are bigger than the numbers that are dying through COVID.

‘At what stage are we going to turn that narrative around and really find out what the real numbers are, which is Australians dying in a lot of other ways because of the lockdowns?’