Tributes have poured in for legendary Bond girl and Avengers actress Honor Blackman who has died aged 94.

The star, best known for her iconic role as Pussy Galore opposite Sean Connery’s Bond in Goldfinger, passed away from natural causes at her home in Lewes, Sussex surrounded by loved ones, her family announced today.

In a statement, they said: ‘It’s with great sadness that we have to announce the death of Honor Blackman aged 94.

‘She died peacefully of natural causes at home in Lewes, Sussex surrounded by her family.

‘She was much loved and will be greatly missed by her two adopted children Barnaby and Lottie, and her four grandchildren Daisy, Oscar, Olive and Toby.’

David Walliams led the tributes after news of her death, tweeting: ‘Farewell Honor Blackman. She will live forever as Pussy Galore in ‘Goldfinger’.’

Piers Morgan wrote: ‘RIP Honor Blackman, 94. A wonderful actress, and my favourite of all the Bond girls when she played Pussy Galore in Goldfinger.

Honor Blackman has died: James Bond’s Pussy Galore and Avengers star has passed away aged 94 due to natural causes (pictured in the James Bond movie in 1964) 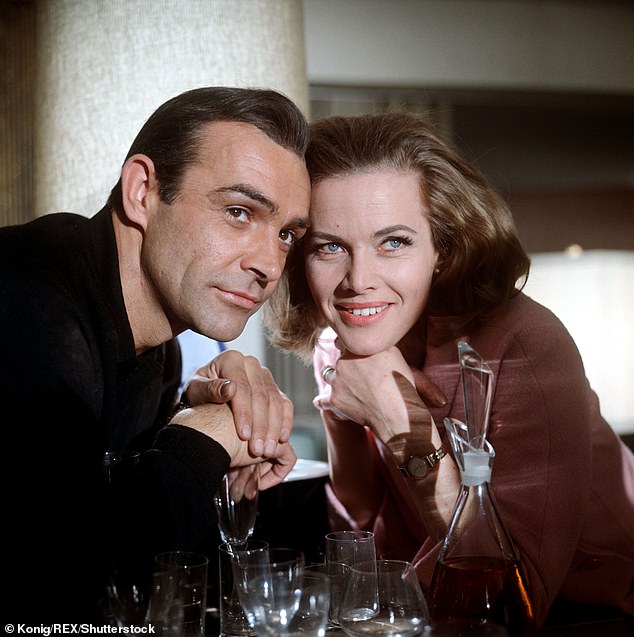 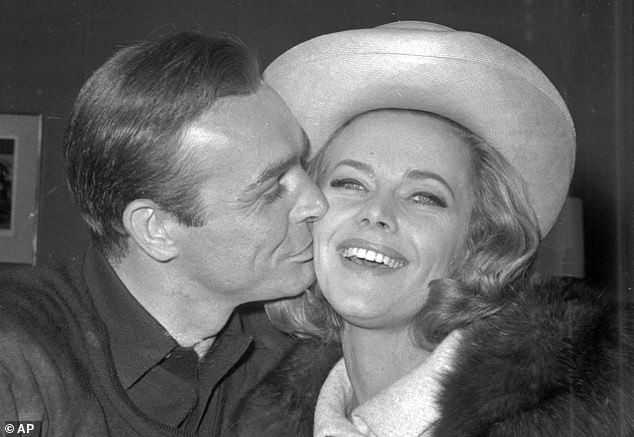 ‘She died of natural causes. Her family said she was ‘an extraordinary combination of beauty, brains and physical prowess’. Yes she was. What a life.

Actor Joe McGann, who starred alongside Blackman in the ITV series The Upper Hand, tweeted: ‘Just heard the very sad news that dear Honor has died.

‘What a woman she was – fiercely bright, superbly funny and a wonderful actress on screen and onstage. I loved every day of working with her and I loved and respected her with all my heart. RIP.’

Her family described the actress as a ‘much adored’ mother and grandmother, alongside an actor with ‘hugely prolific creative talent’ and ‘an extraordinary combination of beauty, brains and physical prowess’.

‘As well as being a much adored mother and grandmother, Honor was an actor of hugely prolific creative talent; with an extraordinary combination of beauty, brains and physical prowess, along with her unique voice and a dedicated work ethic she achieved an unparalleled iconic status in the world of film and entertainment and with absolute commitment to her craft and total professionalism in all her endeavours she contributed to some of the great films and theatre productions of our times,’ the statement said.

‘Her numerous and varied roles included Cathy Gale in The Avengers and Bond girl Pussy Galore in Goldfinger.

‘She is also famous for her role as the vengeful goddess Hera in the Ray Harryhausen, Charles H Schneer, production of Jason And The Argonauts and as Laura West on the TV series The Upper Hand (1990-1996).

‘Honor’s successful career has also extended into theatre including The Sound Of Music, My Fair Lady and Cabaret to name just a few. 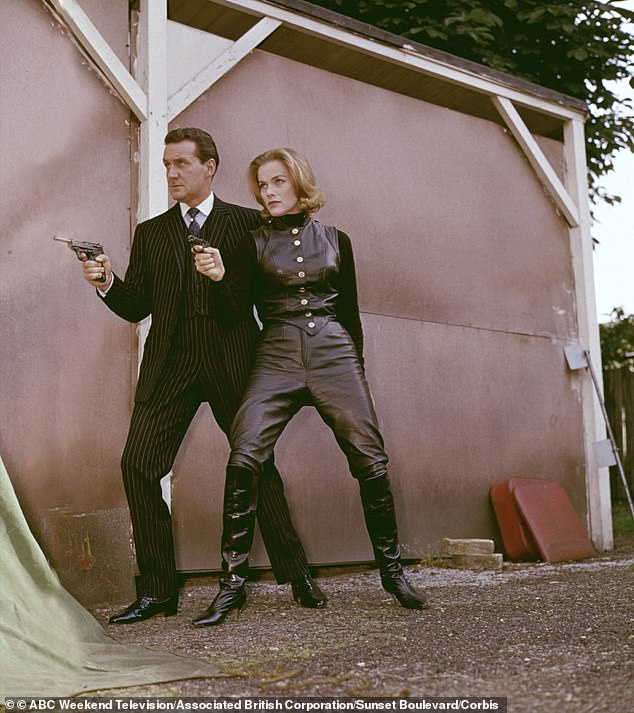 Patrick Macnee and Honor Blackman on the set of the TV Series The Avengers. The actress died today 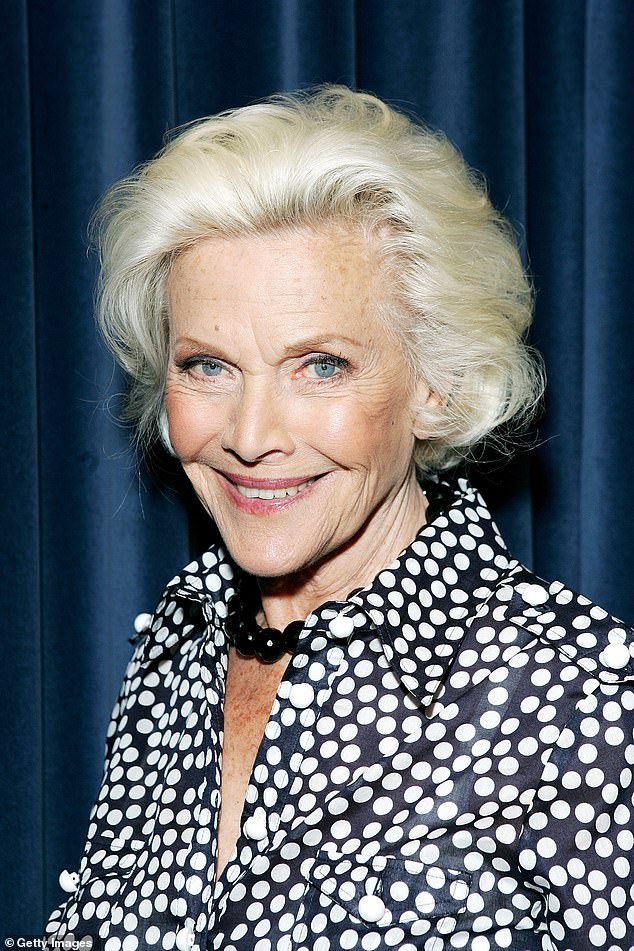 Actress and singer Honor Blackman poses for a photograph whilst recording her single ‘The Star Who Fell From Grace’ at Angel Studios on May 15, 2008 in London

‘In recent years Honor was touring and performing in her show Honor Blackman As Herself at various venue across the UK. In conversation with her colleague and friend Richard Digby Day she looked back over her astonishing life, her beginnings, her family, her rise to stardom with her usual sense of humour and perspective.

‘Honor was an avid reader of news and politics and she particularly loved all forms of insightful unbiased reporting and intellectually enlightened broadcasting.

‘We ask you to respect the privacy of our family at this difficult time’.

In 2014, Ms Blackman spoke to MailOnline about why Sean Connery is a hypocrite and why she turned down a CBE.

She said: ‘They ring you beforehand to ask if you’d like to accept, and I think they were quite shocked when I declined,’ she says.

‘But since I’m a republican I thought it would be somewhat hypocritical to pop up to the Palace. 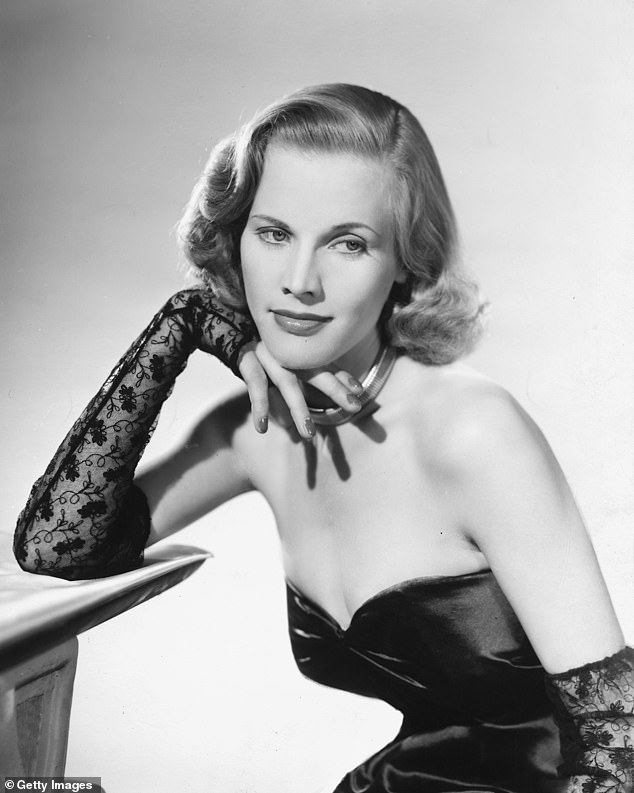 The Goldfinger star passed away from natural causes at her home in Lewes, Sussex 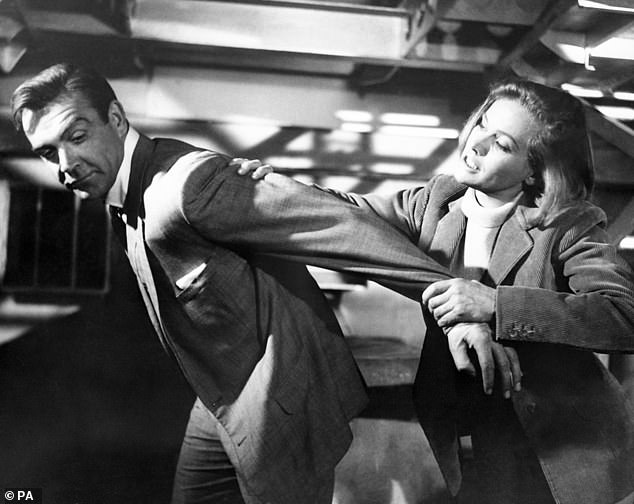 The actress found international stardom as Pussy Galore at the age of 38, alongside Sean Connery, in 1964’s Goldfinger 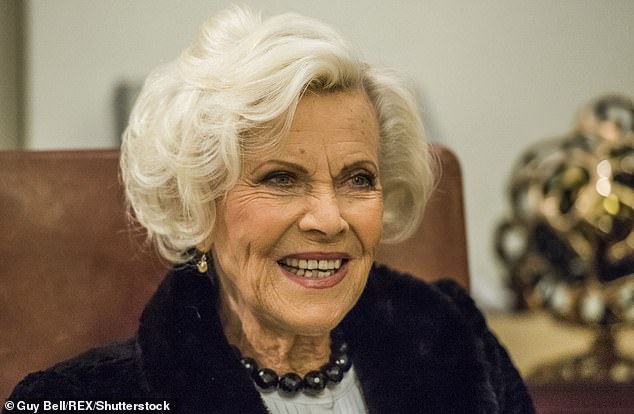 Ms Blackman was born in August 1925, in Plaistow, East London, as were her parents and grandparents before her

‘Not like Sean (Connery), who accepts a knighthood but never comes here, doesn’t pay tax here and supported a yes vote in the referendum.

‘But I don’t think he thinks deeply about politics.’

The actress has nothing but praise for Connery’s Bond, however. ‘He is, I think, the sexiest creature I have ever met. And he was fun, too.

Ms Blackman was born in August 1925, in Plaistow, East London, as were her parents and their parents before them.

A proper East Ender, her father was a World War I veteran and a minor civil servant, who said he was passed over repeatedly for promotion because of his Cockney accent.

Honor Blackman was an English starlet who transformed virtually overnight into the judo-kicking Cathy Gale in the 1960s TV hit The Avengers – and later became Pussy Galore in the James Bond film Goldfinger.

Blackman, whose working life began as a motorcycle dispatch rider for the Home Office during the Second World War, became one of the most popular and loved actresses on stage and screen.

She was playing demanding roles in the West End into her 80s and retained the youthful looks, glamour and style of a much younger women.

Indeed, in 1996, she wrote a book called How To Look And Feel Half Your Age For The Rest Of Your Life. 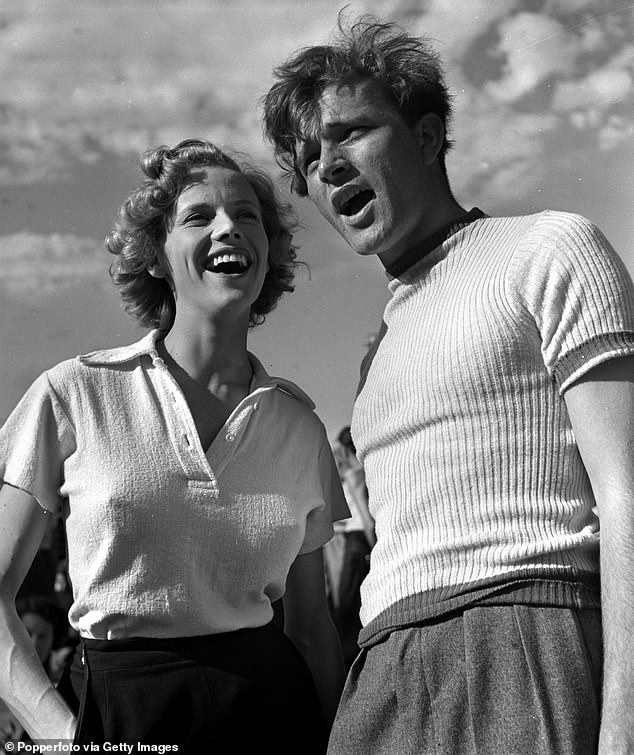 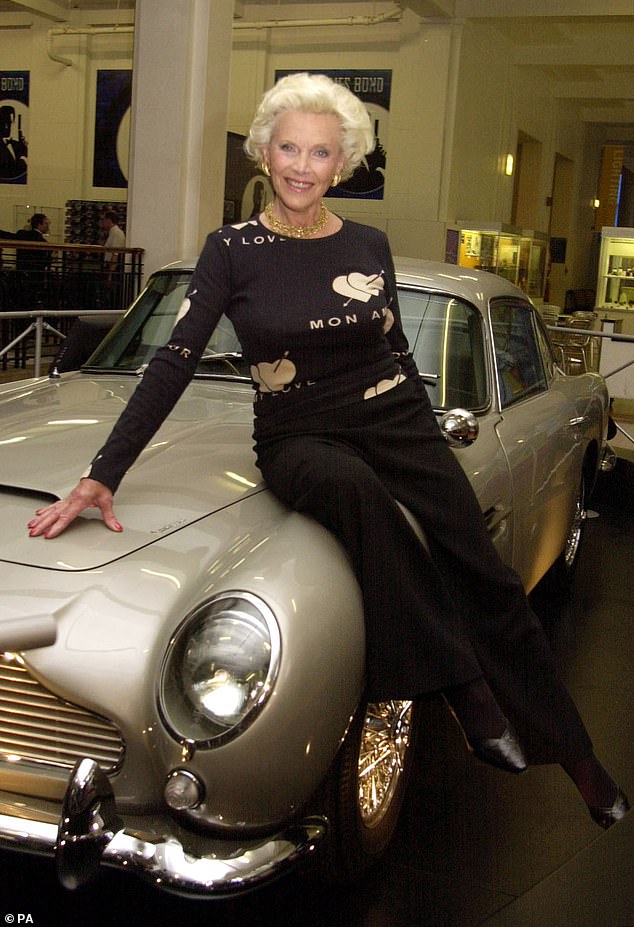 Honor Blackman, who played Pussy Galore in Goldfinger, with James Bond’s Aston Martin DB5 during the opening of ‘Bond, James Bond’ at the Science Museum in London in 2002 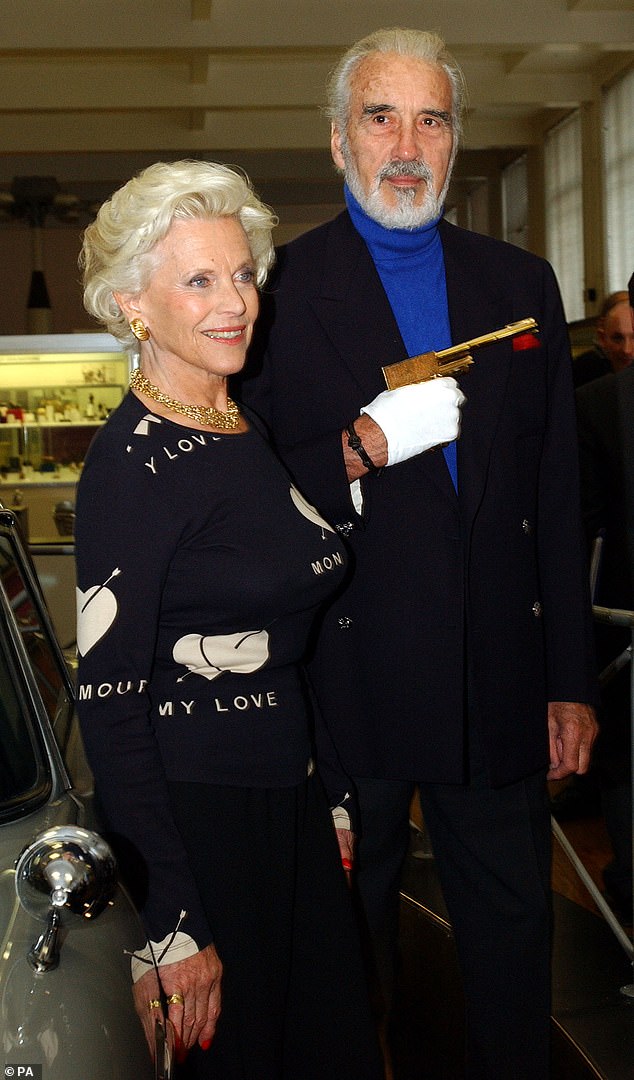 Honor Blackman, who played Pussy Galore in Goldfinger with Christopher Lee who played Scaramanga in The Man with the Golden Gun, during the press viewing of the ‘Bond, James Bond’ exhibition at the Science Museum in London

Honor Blackman was born in Plaistow in the East End of London on August 22 1926. Her father, a strict disciplinarian, taught her how to box, a skill which came in useful when she knocked out two boys who were bullying her brother Ken, who later tragically died of a brain haemorrhage in his early 30s. She was also a judo brown belt.

She left home at the age of 17 when her father hit her for using make-up. She hit him back.

Blackman began acting at the Guildhall School of Music and Drama in the 1940s. She was not, as has often been claimed, a member of the Rank Charm School, but she was certainly a Rank starlet. Her first role was at the Criterion Theatre, London, as an understudy in The Guinea Pig.

At the age of 20, she married businessman Bill Sankey, whom she later described as being like her father. Two years later she had an abortion, which was illegal at the time and nearly killed her. 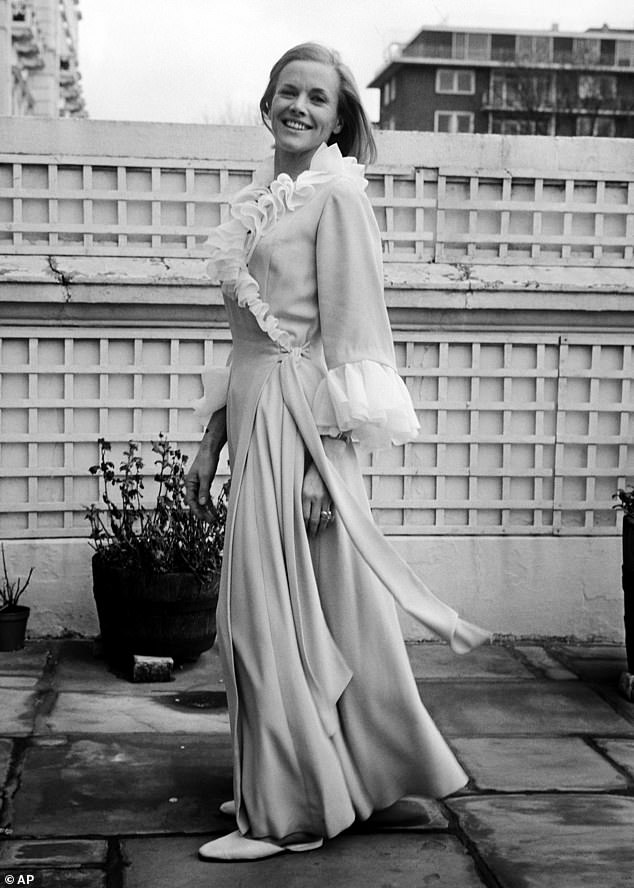 After that she was offered a part in a film to be shot in Spain, and realised how much she enjoyed living on her own. The marriage broke down and ended in divorce, all of which took its toll. Blackman had a nervous breakdown at the age of 29 and spent four weeks in a mental hospital followed by five years in therapy.

At 37, she married her second husband, actor Maurice Kaufman. They discovered that they could not have children together so she adopted a boy and a girl, Barnaby and Lottie.

By now her career was soaring with her role in The Avengers. ‘Everyone thought of me as a glamour puss,’ she said. ‘And I wasn’t offered classic roles or Shakespeare, which I’d like to have done.’

She was in The Avengers from 1960 to 1963 and left when she felt they were recycling old scripts.

It was around the same time her marriage started to break down when her career began to soar but her husband’s went downhill and they eventually divorced.

Blackman achieved international stardom in 1964 as Pussy Galore. The scene in which a menacingly-efficient Blackman throws Sean Connery’s 007 to the ground is regarded as one of the most smouldering of the genre.

But there were more TV successes as well. She starred in the ITV comedy series The Upper Hand which ran from 1990 to 1996, as a glamorous grandmother with a taste for toyboys.

She had a cameo role in the film Bridget Jones’s Diary, and scored a runaway hit in her one-woman show Dishonourable Ladies, about femmes fatales through the ages. At one point, she was touring with her show while rehearsing for Tennessee Williams’ The Glass Menagerie.

In 2000, at the age of 74, she played the part of ageing actress Mme Alexandra in the Jean Anouilh comedy Mademoiselle Colombe at the small Bridewell Theatre off London’s Fleet Street.

In her mid-70s, Blackman was diagnosed with breast cancer. However, early treatment seemed to eradicate the disease.

Afterwards she said: ‘It was an aggressive cancer but I’ve been well looked after. They don’t know what the prognosis is but my specialist thinks he has got me under control. He must be the first!’

Before long, she was back on the stage, doing a six-month stint playing Fraulein Schneider in the West End production of Cabaret in 2007.

In later life, at the age of 90 in 2015, she hit out at the ‘ridiculous obsession’ with the age of women appearing in Bond films.

She also called for an end to stars being referred to as Bond girls because they are ‘women and actresses’.