The grieving family of former NSW Waratahs star Kelly Meafua have broken their silence in a heartbreaking tribute after the rugby union star’s tragic death in France, despite his teammates’ frantic efforts to save him.

The 31-year-old leapt from the Pont-Vieux bridge into the River Tarn in the south of the country on Saturday, Australian time, while celebrating his Montauban club’s 48-40 victory over Narbonne in their final home Pro D2 game of the season.

The former Samoan World Sevens flanker was with teammates when he jumped into the water from a height of more than 20 metres, according to French news reports.

Montauban prop forward Christopher Vaotoa jumped into the water in a desperate effort to save Meafua but had to be rescued by firefighters and was hospitalised with hypothermia. He has since been discharged.

Meafua’s death has rocked the rugby world and sparked an outpouring of tributes from friends and former teammates from both sides of the world as his shattered family prepare to bring his body back to Australia.

The rugby union world has been rocked by the tragic death of Kelly Meafua (pictured: Playing for the NSW Waratahs in 2018)

Older brother Sapati Peniata took to social media on Monday to thank friends for the messages of love, support and encouragement.

‘It is with the utmost heartache and sorrow that we confirm the loss of our beloved baby brother the youngest of us siblings Kelly Peniata Meafua, who tragically passed away in an accident in France,’ he wrote.

‘We will inform everyone once we confirm everything, but first things first is organising for our brother to return back to Australia.

‘Thank you all again for the pillar of love and support we all appreciate it.’

Meafua was born in Samoa and moved to Auckland as a teen before later moving to Australia, where he spent four seasons with West Harbour in the Shute Shield, Sydney’s premier rugby competition.

He missed out by one vote on winning the competition’s Ken Catchpole medal in 2018.

He played for the now-defunct Greater Sydney Rams and was part of the extended training squad for the NSW Waratahs before he moved to France in 2018.

‘We are shocked and saddened by the news coming out of France today. Our thoughts are with the Meafua family,’ the Waratahs posted. 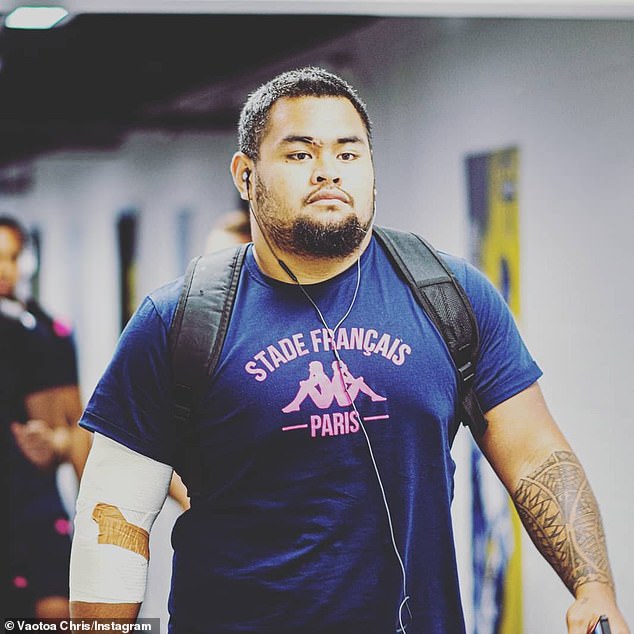 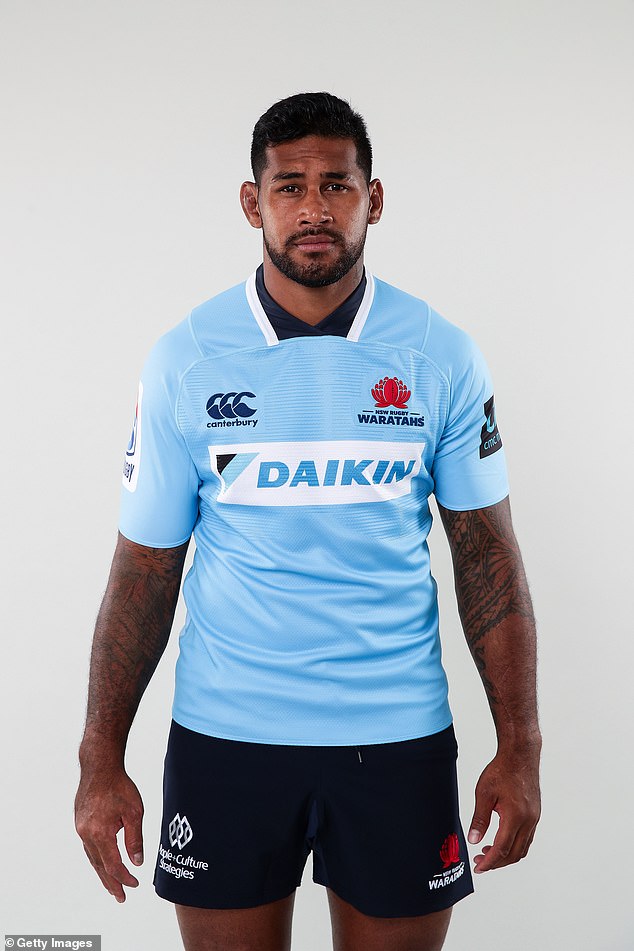 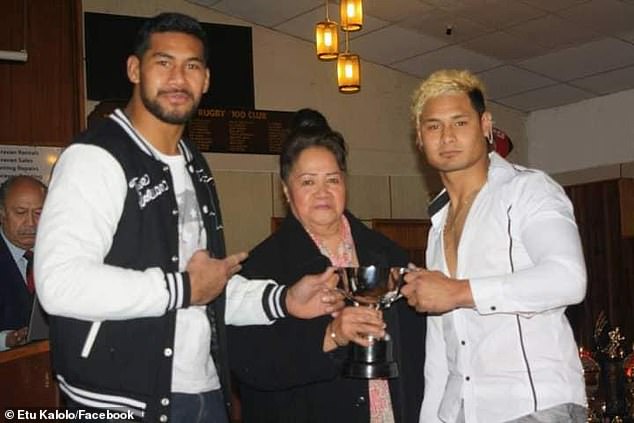 His Shute Shield club remembered Meafua as a hard hitting and abrasive player.

‘Kelly played for the Pirates for many years and was renowned for his hard hitting abrasive play,’ West Harbour posted.

‘Kelly was a former winner of the Shute Shield rookie of the year and spent time at the Waratahs before forging a successful career in France. RIP Uso.’

His former West Harbour coach hailed him as one of the toughest players he’s ever coached.

‘Kelly was always at the centre of everything and he was a hard man on the field, that’s for sure,’ Todd Louden told the Sydney Morning Herald.

‘He had a ton of talent and he was a leader through his play on the field, but also just vibrant all of the time. My fondest memory of Kelly was every time he smiled, he lit the room up. He was a smiling assassin, someone no one wanted to play against, and everyone wanted to play with.’

‘He was an honest and forthright member of any squad and my memory of him was that he was a pleasure to have involved in the club not just as a player, but as a man on a mission to work hard and provide for his family to the best of his ability,’ Harrison said. 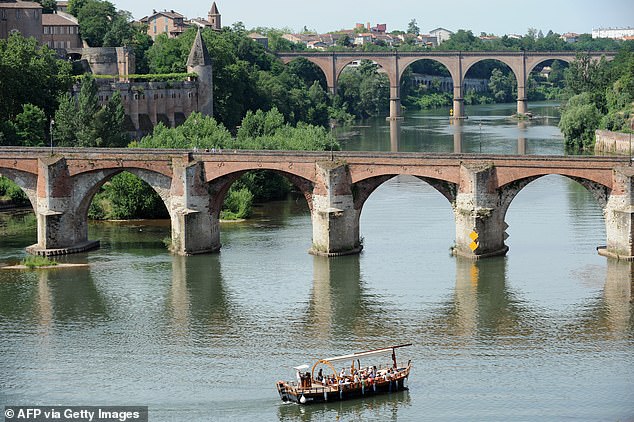 ‘So sad to Hear of the shock passing of my uso in France. I will never forget our last conversation when you rung about our uso Kawwa. Thinking of your family & kids at this time. A Beast on the Field,’ one mate posted.

Montauban expressed their shock at the tragic news in a club statement which read: ‘The entire club is shocked and everyone is thinking of his wife, his children, his teammates and more generally everyone who loves the club,’ a club statement read.

‘Kelly was a player who was well liked by everybody. His joy for life was infectious and radiant. Today we have lost a player, a friend and a brother.’

The Union Sportive Montauban Sapiac team posted a tribute to him online.

‘U.S.M. Sapiac painfully announces the death of Kelly Meafua on the night of Friday to Saturday,’ the club statement said.

‘One of his teammates tried to rescue him, without success.’ 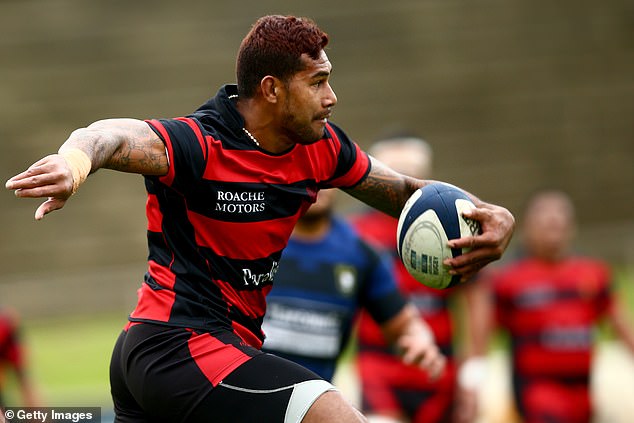 ‘The entire club is shocked and everyone is thinking of his wife, his children, his teammates and more generally everyone who loves the club,’ a club statement read.

‘Kelly was a player who was well liked by everybody. His joy for life was infectious and radiant. Today we have lost a player, a friend and a brother.’

Meafua only started playing rugby at the age of 20 after moving to New Zealand when he was a teenager.

The 32-year-old played for the NSW Waratahs in the Global Tens tournament in 2018 and starred in Sydney club rugby for West Harbour and the Greater Sydney Rams.

He also made the Samoa team for the 2013 World Rugby Sevens Series, moved to France to play for Narbonne in 2015 and switched to Beziers in 2018 before joining Montauban in 2020.

This season Meafua had scored eight tries in 24 Pro D2 matches for Montauban. 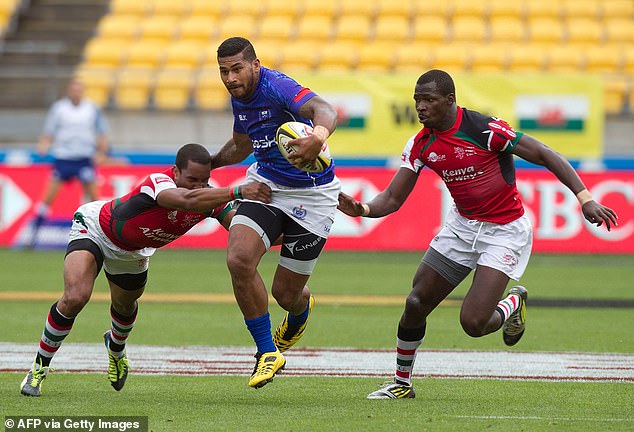