Trembling hand of fire chief as he announces grim death toll after South Korea Halloween stampede: Official is filmed shaking uncontrollably during briefing to press in wake of tragedy

A video shows a fireman in South Korea trembling as he gives a press briefing about the Halloween stampede that killed over 150 people.

Last night 153 people died in a crush in Seoul, with another 82 injured, as huge crowds gathered in the popular nightlife area Itaewon for a Halloween festival.

Footage of Chief of Yongsan Fire Department Choi Seong-beom informing the media in calm manner that the death toll of the crowd crush had risen has been shared widely online.

The ‘heartbreaking’ video, which was taken several hours after the deadly incident occurred, shows the exhausted emergency worker slightly shaking as he holds the microphone.

Online people responded to the video to share their sympathies with Choi Seong-beom and other emergency workers who attended the traumatic incident.

More than 1,700 emergency workers were deployed from across South Korea to respond to one of the deadliest crowd crushes in recent history – including about 520 firefighters, 1,100 police officers and 70 government workers. 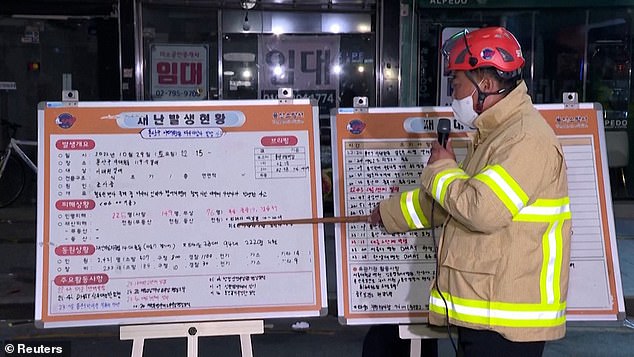 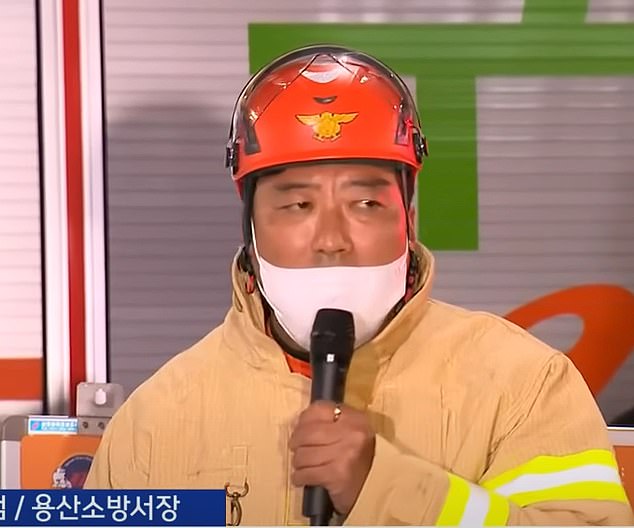 Online, people noticed Choi Seong-beom’s hand was shaking as he held the microphone and suggested it may be due to the traumatic nature of the incident 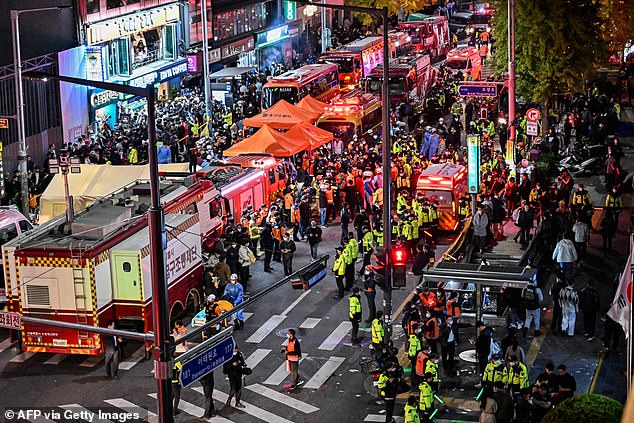 Onlookers, police and paramedics gathered where dozens of people suffered cardiac arrest, in the popular nightlife district of Itaewon 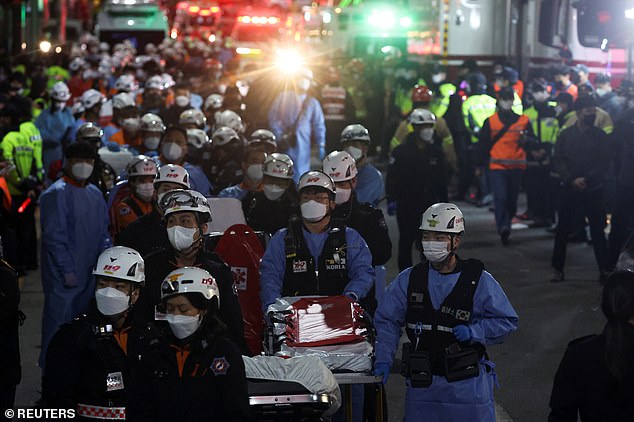 The scale of the emergency response in Seoul saw emergency workers called from across the country, including 140 ambulances 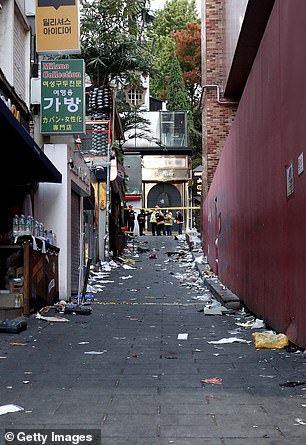 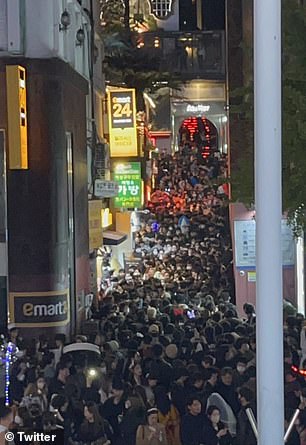 Left: The alleyway is seen early on Sunday morning. It remained cordoned off as police continued their investigations into the tragedy. Right: The same alleyway is seen shortly before the crush. Hundreds of people are shown packed in

The account which shared the video online said: ‘I am worried about the trauma of everyone who was at the scene. I hope that the country will take responsibility and support the trauma management after the accident of all the personnel who were put into the field today.’

Racheal said: ‘You know it’s traumatic when the head of fire department has trembling hands.’

Another user tweeted: ‘Being a first responder to an awful calamitous event amidst a celebration would impact even those accustomed to tragedy.’

Reid said: ‘I feel for him– can you imagine being him? I certainly pray for all the law enforcement, emergency workers, and others who responded to the tragedy.’

One Twitter user suggested his hands may be trembling from CPR, while another person said: ‘This is heartbreaking. I hope they all receive free therapy sessions.’ 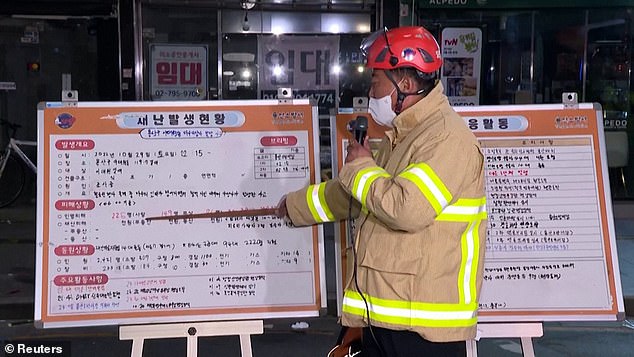 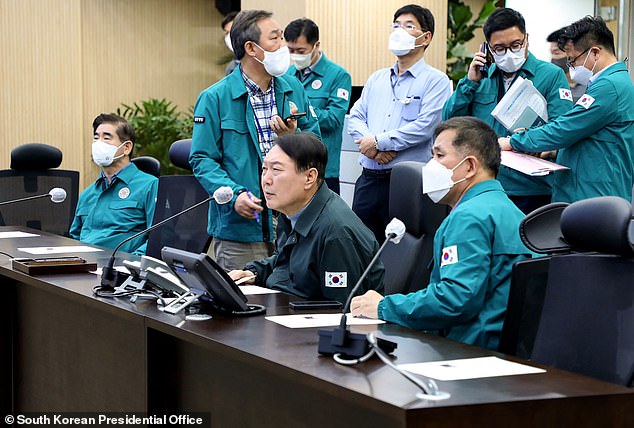 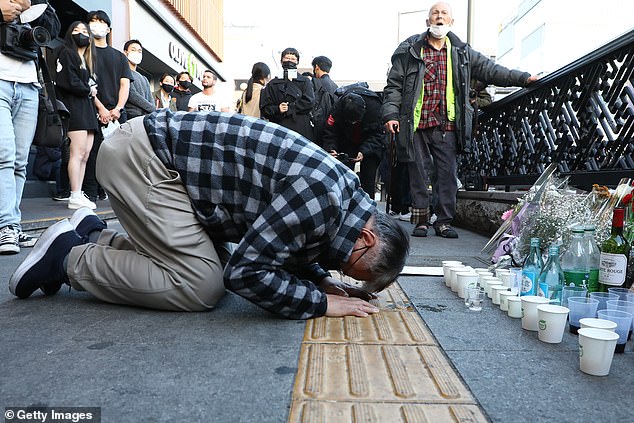 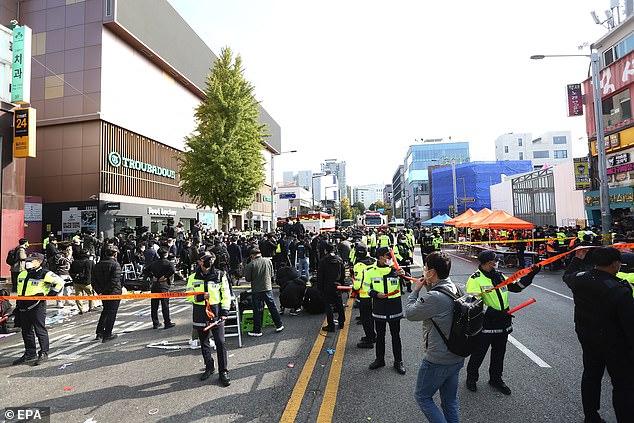 South Korea has now declared a week of mourning after people reportedly ‘fell like dominoes’ around 10:30pm during the fatal crush at the Halloween festival, where a 100,000-strong crowd had gathered in narrow streets.

Dozens reportedly suffered cardiac arrests and the current death toll stands at 153, including at least 19 foreign nationals, with many of the victims being women in their 20s.

South Korea’s President Yoon Suk-yeol declared the week of national mourning and after visiting the site earlier today said that the deadly stampede ‘should not have happened’.

‘In the centre of Seoul, a tragedy and disaster occurred that should not have happened,’ Yoon said in a national address, vowing to ‘thoroughly investigate’ the incident and ensure it could never happen again.

Reports from last night also detail how some revellers continued to party in the neighbourhood after the crush – despite desperate pleas from the police to go home.