Treasurer Jim Chalmers has taken a swipe at embattled Reserve Bank governor Philip Lowe’s suggestion that Australian borrowers can cope with rising interest rates and inflations because they have savings.

The Federal government confirmed on Wednesday that inflation surged 6.1 per cent in the June quarter – increasing the chance of a super-sized interest rate rise by the RBA next week.

Chalmers today took exception to Dr Lowe’s suggestion most borrowers had a savings ‘buffer’ from staying at home during lockdown, and therefore could cope with variable mortgage rates and the surging cost of living.

‘Well, there’s a lot of commentary about people having buffers in their home loans for example, which wrongly assumes, in my view, that interest rate rises and inflation isn’t hurting people,’ he said.

Dr Lowe, who is paid a total package of $1,076,029, last week suggested most borrowers could cope because they had built up sufficient savings ‘buffers’.

‘The household saving rate is still higher than it was before the pandemic and many households have built up large financial buffers, including through payments into mortgage offset accounts,’ he told The Australian Strategic Business Forum.

Australia’s big banks are all expecting the Reserve Bank to raise the cash rate by 50 basis points in both August and September.

But some economists, including the Commonwealth Bank’s head of Australian economics Gareth Aird, have said there was an outside chance of a 75 basis point increase, which would be the most severe monthly increase since December 1994. 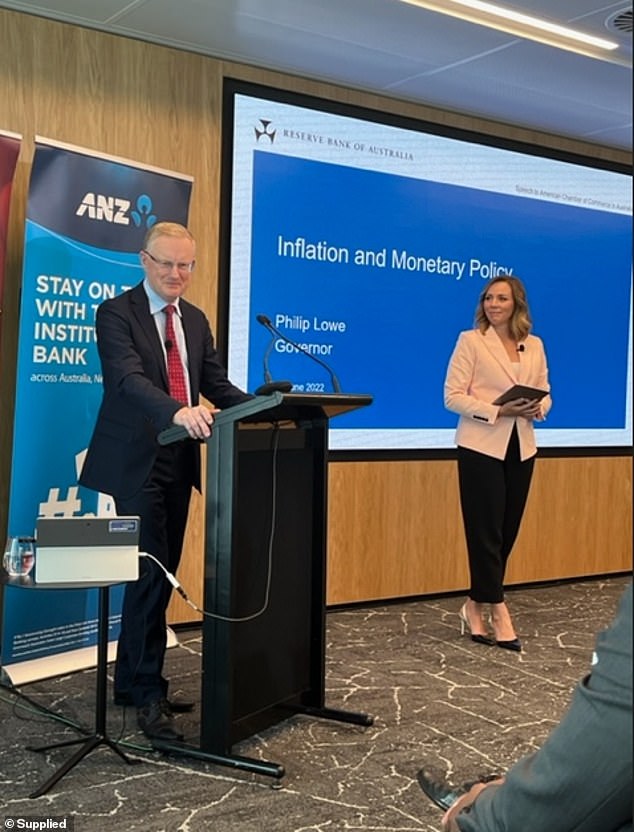 Borrowers in May, June and July have already copped rate increases of 1.25%, the most severe hikes since 1994.

‘For every dollar that people find to service their mortgages, every extra dollar, it means a dollar that can’t go to funding the skyrocketing costs of other essentials,’ he said.

‘We need to take a broad view about the impact of inflation on the economy but also on the most vulnerable Australians.’

‘Some households are more likely to face financial stress than others,’ she said.

‘Highly indebted households are especially vulnerable in the event of a loss of real income through higher inflation, particularly if combined with rising interest rates, and a decrease in housing prices.’

In his speech, Dr Lowe acknowledged some borrowers would struggle, but only in reference to his colleague’s remarks.

‘But as my colleague, Michele Bullock, discussed yesterday, not all households are alike,’ he said.

‘Recent borrowers and borrowers with lower incomes tend to have smaller buffers.’

The consumer price index in the June quarter soared at the steepest pace since mid-2001, after unemployment last month fell to a 48-year low of 3.5 per cent.

But when the one-off effect of the GST introduction was excluded, Australia’s CPI was the highest since the December quarter of 1990, during the first Gulf War.