A friend of Tyson Fury has been jailed for four years for kidnapping a young mother and holding her prisoner in his caravan during a dispute over a litter of puppies.

Connor Hamer, 27, who has been pictured with the boxing champion, forced the woman to drive 60 miles with her infant son after they argued over which animal they would adopt.

The woman, who cannot be named, deliberately drove erratically in the hope another motorist would report her for drink driving, Bolton Crown Court heard.

However, the mother was held captive inside his caravan in Bury, Greater Manchester, overnight before she was able to escape and call the police.

Jurors heard how the woman was grabbed by the hair, thrown to the floor and punched during the ordeal in June last year.

She suffered a fractured finger and several bruises.

Connor Hamer (above), 27,  forced the woman to drive 60 miles with her infant son after they argued over which animal they would adopt 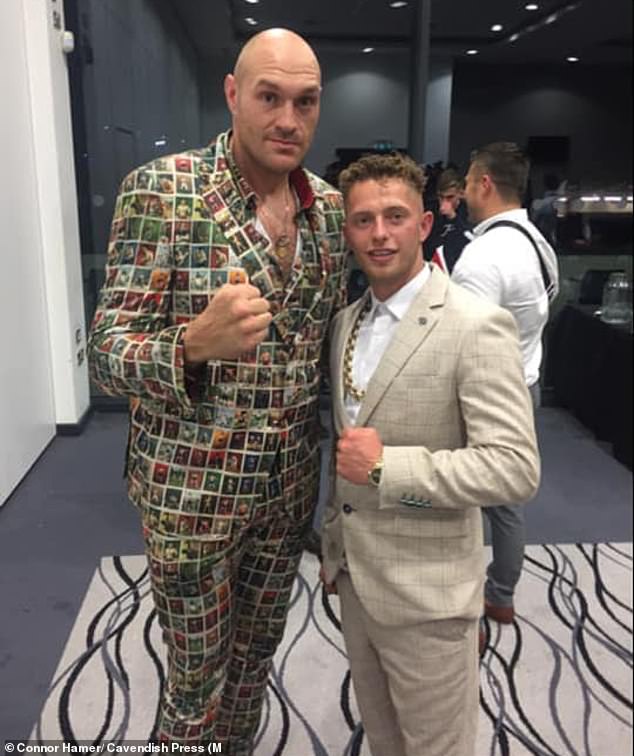 Hamer is pictured with boxing champion Tyson Fury, who he often shares images of online

Hamer was found guilty of kidnap following a trial and was jailed for four years.

During the hearing, Hamer’s lawyer insisted it is ‘not accurate’ that Hamer is a ‘man of the travelling community’ despite having ‘connections and friends’ within it.

Since his sentencing hearing on Thursday, an image which appears to show Hamer inside prison has been posted to Facebook with the caption: ‘Get me out of here.’

Previously, Hamer has shared videos and photographs with Mr Fury, including a clip of the heavyweight champion ‘living life on my monkey bike.’

In another post, he refers to Mr Fury’s father John as a ‘true pal’.

The charges against Hamer relate to an incident in June 2020, in which he and the victim, from Morecambe, became embroiled in a feud over which puppies they would share. 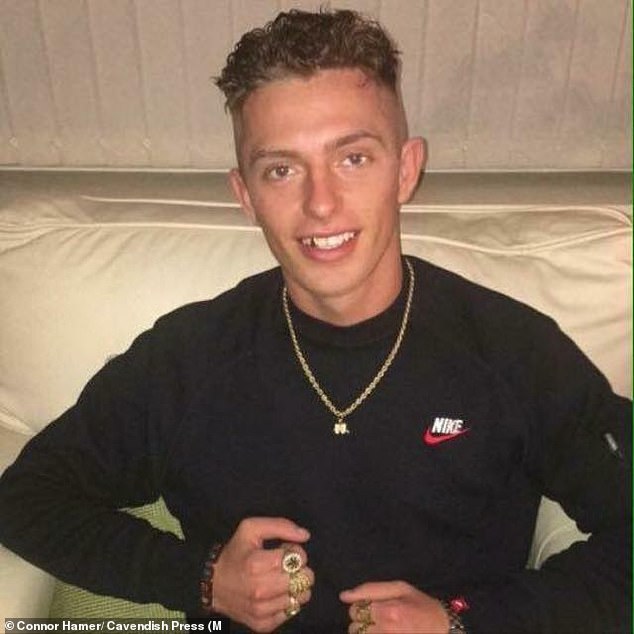 During the hearing, Hamer’s lawyer insisted it is ‘not accurate’ that Hamer is a ‘man of the travelling community’ despite having ‘connections and friends’ within it 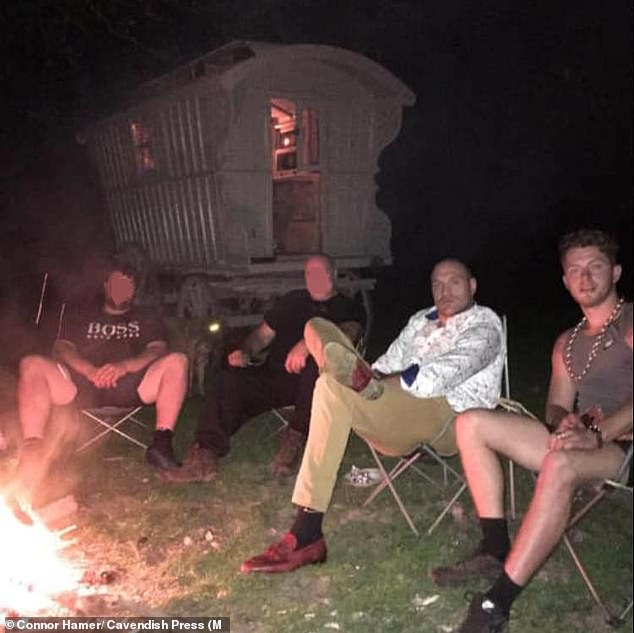 The woman, who cannot be named, deliberately drove erratically in the hope another motorist would report her to police, Bolton Crown Court heard. Pictured: Hamer with Tyson Fury

‘She was at home. She put her baby to bed and had gone outside for a cigarette then saw the defendant arriving.

‘He said he was going to take the dog and the puppies and was trying to provoke some sort of argument.’

Jurors heard how the victim, realising Hamer was trying to get into a fight, ran away from him up a drive outside a house.

However, Hamer chased her and ‘grabbed her by the hair,’ Mr Cadwallader said. 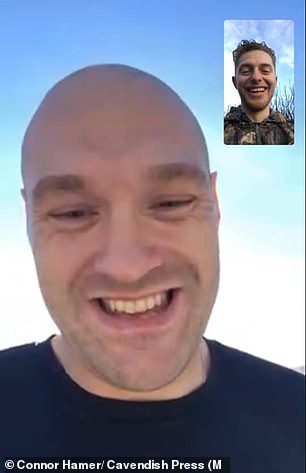 Pictured: Hamer in a FaceTime call with Fury

He told the court: ‘He threw her to the floor and started punching her. He dragged her down the drive and into the house. She said she was frightened and did what she was told.

‘He pushed her down on the bed, before throwing the phone against the wall and then picking it up and snapping it. The baby started crying and the defendant allowed her to use a dummy to calm him down.

‘He told her to get the baby dressed then took hold of her and told her she was driving. She got in the car and drove to Bury.

‘On the way she kept tapping on her brakes and weaving erratically, thinking that someone would think she was drink driving and call the police.

‘When they got to Bury, he was screaming and shouting. They drove to his caravan. They got in the caravan. The baby was crying. He told her to calm the baby down. She lay on the bed with the baby to try to get him to sleep.

‘The three of them slept on the bed together. He barely spoke to her the next morning. He made her go to the bank and get some money.

‘By then, a friend of the defendant had taken the dogs away.’

Mr Cadwallader then drove with the victim to Lancaster, where he said she attempted to take out money for him but the bank denied the transaction.

He said: ‘He said he wanted money, pushing her to try another then drove to her house. She went to her friend’s house, she broke down and subsequently phoned the police.’

Hamer denied wrongdoing but he was convicted of kidnap after a trial. 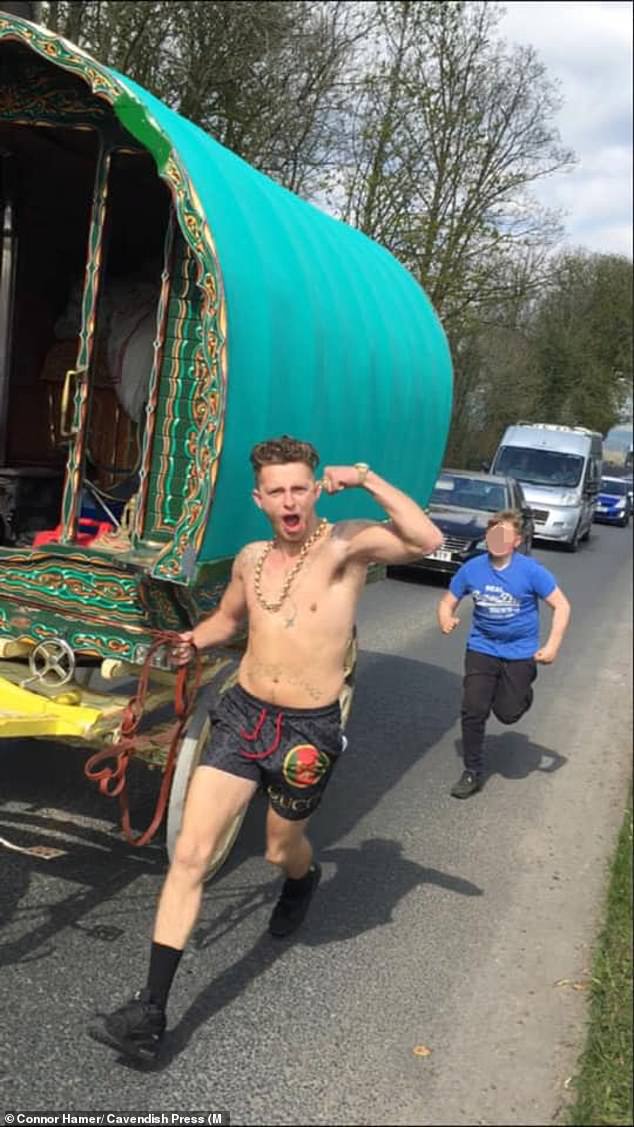 Defence counsel Miss Kathryn Johnson said: ‘When he was much younger, he did have anti-authority attitudes but he has matured and grown up and realizes that these views are pointless.

Sentencing Judge Timothy Stead told Hamer: ‘Although she didn’t want to be with you at all, let alone overnight, the best course, she thought, was to give you the impression that she was making up her differences with you and was entirely willing to go along with your wishes.

‘It was against her will, although she was keeping it to herself and she remained in the caravan overnight and the next day when you wanted money, you requested her to go with you to a bank in Bury, and when that didn’t succeed to a bank in Lancaster to secure money.

‘There were various opportunities for her to escape but what has happened here is that a woman has been required to go with you overnight. She was very much affected. It would have taken her time to cope with the shock.

‘Indeed, when she saw a friend the next day, she has the courage, upon breaking down, to raise the complaint. This was not a kidnapping that happened over a matter of minutes or a moment, or even an hour or two. It lasted overnight and into the next day.’