Watch a frugal airline passenger get an entire extra bag onto his flight for free with sneaky travel move: ‘This man is a master of his craft’

A traveller has revealed how he beats airlines’ stringent baggage allowances by sneaking an extra bag onto a plane without paying.

The man concealed his backpack by wearing a jumper over it before walking confidently towards busy airline staff to get his boarding pass checked.

Unbeknown to staff, the passenger – who was also holding a briefcase – was approved to board the plane wearing an extra bag he didn’t have to pay for.

Another passenger spotted the move and shared it on TikTok.

She posted footage of the man’s jumper stretched taut over the bulky backpack with the caption: ‘When you don’t want to pay for that extra bag’.

Viewers were impressed by the man’s ingenuity.

‘Man that was clever even I didn’t see it,’ one viewer wrote.

’20kg of something inside that bag. He is a master of his craft,’ another said.

In another sneaky situation, a man reduced the weight of his check-in bag by propping his foot underneath it while it was being weighed.

The man made sure to maintain eye contact with airline staff as he pulled off move and avoided paying a hefty excess baggage fine.

The cost of bringing an additional bag on budget airline Jetstar costs about $45 on a domestic flight in Australia and New Zealand.

On flights between the two countries, the fee can jump to about $70. 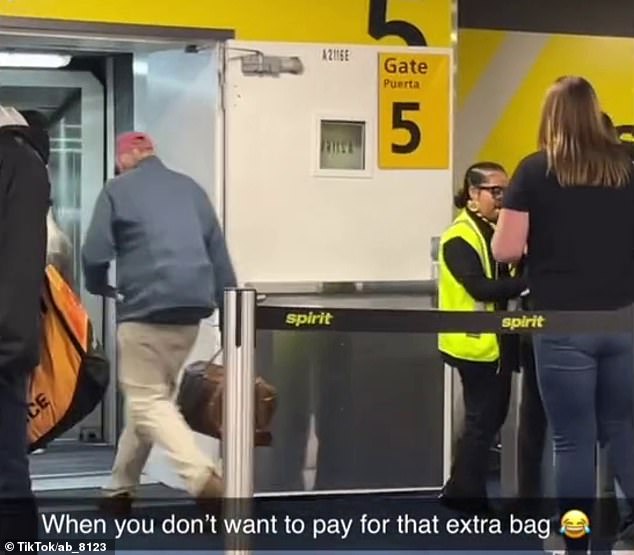 Unbeknownst to staff, the passenger – who was also holding a briefcase – was approved to board the plane wearing an extra bag he didn’t have to pay for (pictured)

Earlier this year, a flight attendant revealed his hack for sneaking extra hand luggage onto a plane without being charged.

Miguel Muñoz, who has been a flight attendant for more than a decade, said the trick to sneaking an extra carry-on bag onto any plane is disguising it as a duty free purchase by concealing it in a shopping bag.

He said many passengers are unaware that duty free bags aren’t counted in your carry-on luggage allowance – a fact that travellers can use to their advantage whenever they find themselves with more baggage than they’re permitted.

According to Miguel, passengers hoping to sneak some extra luggage onto their flight should just ask staff at one of the airport’s duty free shops for a shopping bag – which they can then slip their own carry-on into.