Emirates’ premium cabins are among the flashiest in the world – but do the high standards extend all the way back to economy?

Four travel experts from The Points Guy UK (TPG UK) decided to find out, boarding a London-Heathrow-bound Emirates A380 in Dubai with their video cameras to record experiences in all four classes simultaneously – economy, the brand-new premium economy cabin, business class and first class.

Standards turned out to be impressive throughout, but as the site’s fascinating video shows, there’s a vast difference between the back of the plane and the front, which was a world of caviar, Dom Perignon Champagne and even hot showers. Scroll down for the full verdicts… 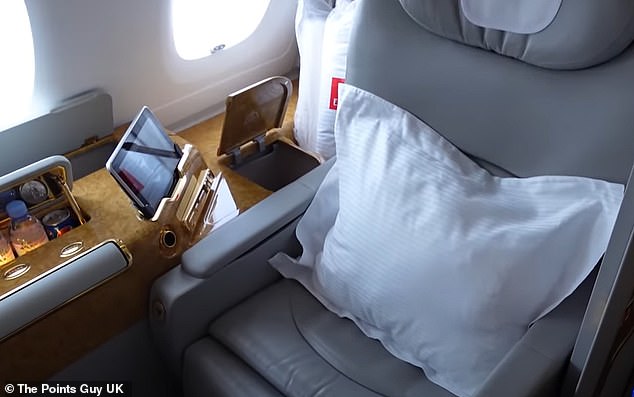 Nicky Kelvin, Head of TPG UK, had the enviable task of putting the Emirates first-class cabin to the test 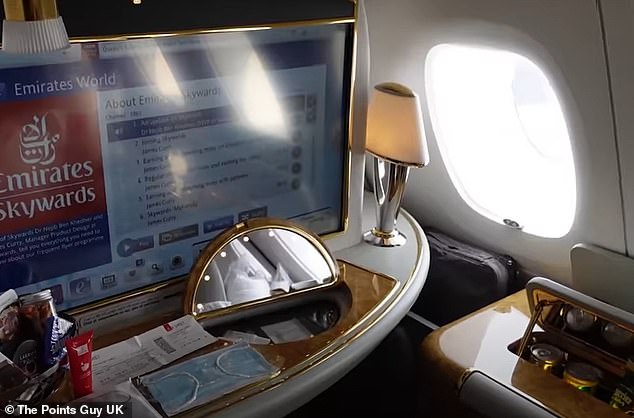 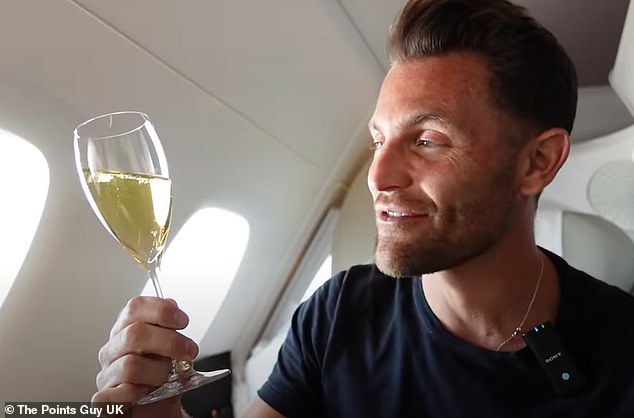 Did Nicky rate the experience? A beaming smile rarely leaves his face throughout the footage

Nicky Kelvin, Head of TPG UK, had the enviable task of putting the Emirates first-class cabin to the test, with the site paying £2,144 as a cash fare from Tel Aviv to London, via Dubai.

Did he rate the experience? Put it this way – a beaming smile rarely leaves his face throughout the footage.

He was whisked to the airport from his hotel in Dubai by a private limo service – then ascended to the top deck of the A380 to one of 14 luxury lairs.

Nicky told MailOnline Travel that the dining was one of several plus points: ‘The food and drink on board was spectacular.’ 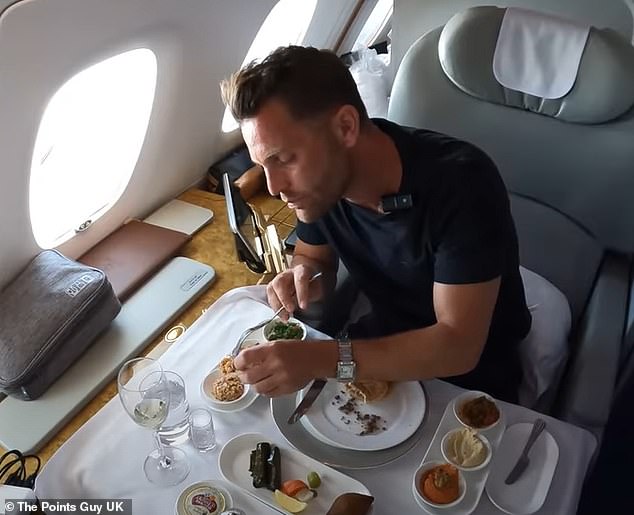 Nicky told MailOnline Travel that the food on board was ‘spectacular’ 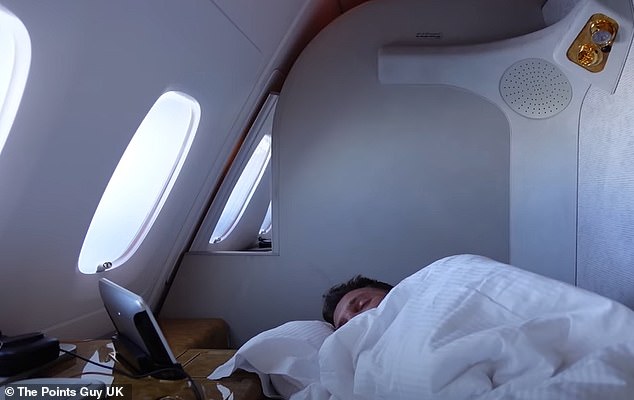 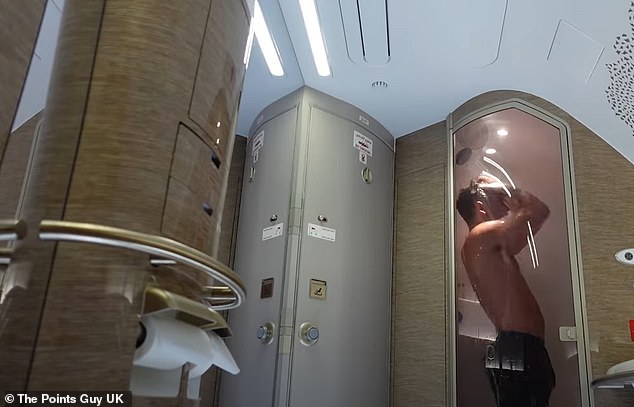 ‘Having access to a shower 35,000 feet in the air is a truly unique and luxurious experience,’ said Nicky 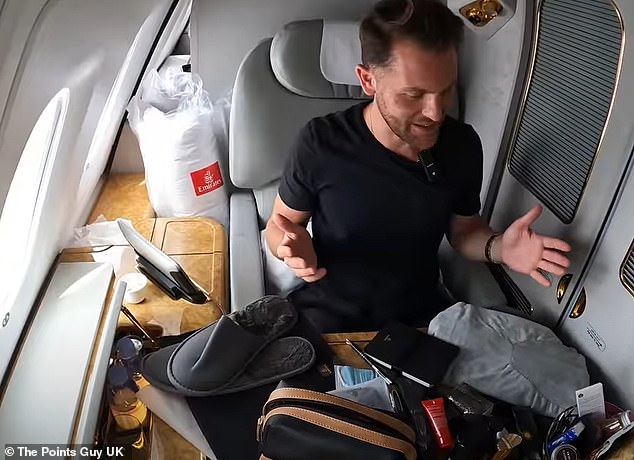 Christmas came early: Nicky marvels at all the freebies he’s given

As well as caviar and Dom Perignon, there were £1,000 bottles of cognac and delicious Arabic mezzees. ‘This was fine dining at its very best,’ said Nicky.

The shower was a winner, too.

Nicky continued: ‘Having access to a shower 35,000 feet in the air is a truly unique and luxurious experience.’

Were there any downsides? A couple, apparently.

Nicky said: ‘With 14 seats in the cabin, it’s less exclusive than some other airlines’ first-class cabins. And the seat is not quite as impressive as the “game changer” 777 First Class suite I flew in a couple of years ago.’ 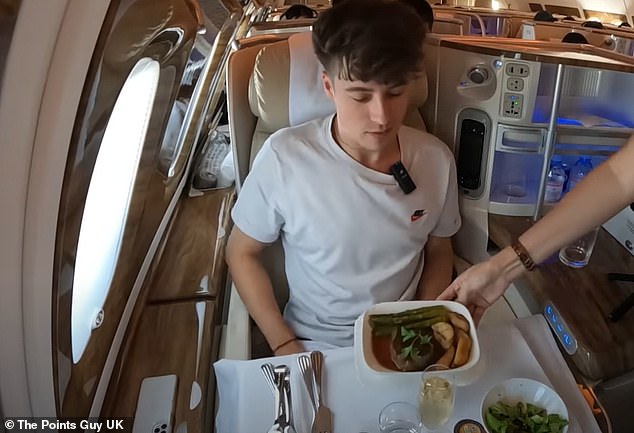 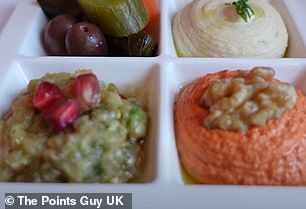 The food was ‘excellent’, said Liam

The Points Guy UK paid 72,500 Skywards miles plus £385 in fees, taxes and surcharges for a one-way business-class redemption ticket from Dubai to London.

Stretching out in this almost-top-tier cabin was Liam, who said that the seat was ‘one of the comfiest and best-looking’ business-class berths he’d ever sat in.

He continued: ‘The cushioned headrest combined with tons of personal space meant that I was able to kick back and relax for the entire journey. I also loved the cream and laminated wood colour scheme.’

The on-board bar went down a treat, too – ‘it elevated my experience to a new level of luxury’.

Liam said: ‘There’s nothing quite like being served a freshly made mojito at 35,000 feet and this element certainly brought a “wow factor” to my flight.’

Praise is also dished out for the cabin crew.

Liam said: ‘Emirates staff went above and beyond to make sure I was looked after at every step of my journey. From a super-speedy check-in to being served Champagne in the business-class lounge, there wasn’t a part of the trip that felt at all stressful.’ 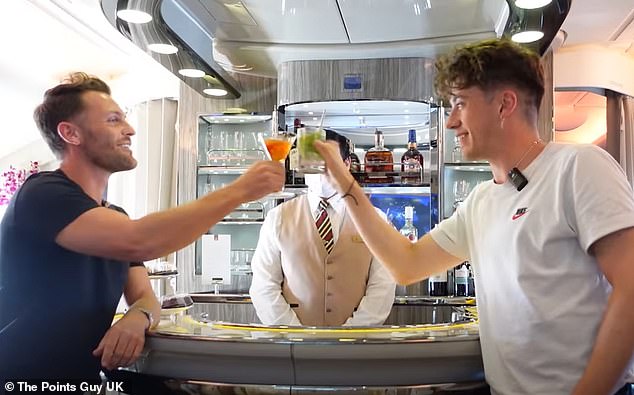 Any downs? The lack of a privacy door in the suite was one.

Liam said: ‘Because my business-class seat didn’t feature any kind of sliding door, it means this seat still ranks below the likes of Qatar’s Qsuite or British Airways’ Club Suite in terms of privacy.’

The frequent flier wasn’t enamoured by his starter, either.

Liam added: ‘The food, on the whole, was excellent, but I was slightly disappointed by my starter. Some of the bread was fairly cold and hard and not too dissimilar to what you might be served in economy.’ 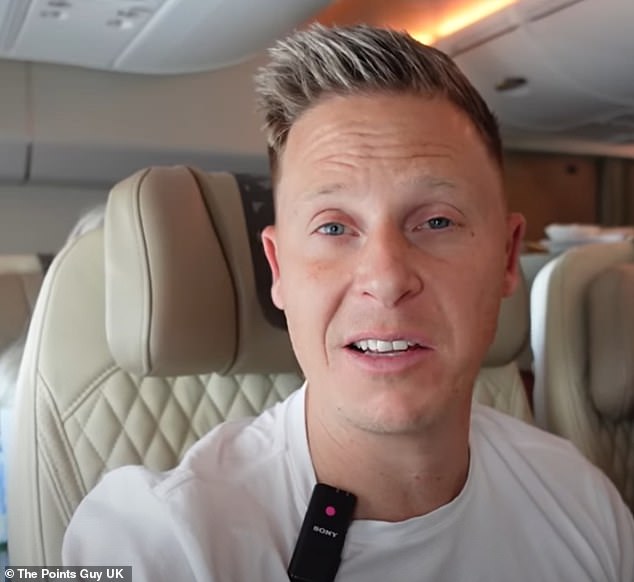 Casting a scrutinising eye over the new premium economy cabin was Ben. The Points Guy UK paid £1,622 for his London to Dubai return ticket, with the outward leg in economy 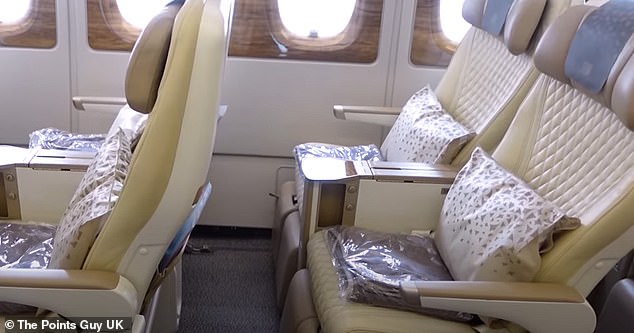 Ben was generally very enthusiastic about his berth. He said: ‘The seat and cabin finishes were very high-end without feeling too “blingy”‘

Casting a scrutinising eye over the new premium economy cabin was Ben, with The Points Guy UK paying £1,622 for his London to Dubai return ticket, with the outward leg in economy.

Ben was generally very enthusiastic about his berth.

He said: ‘The seat and cabin finishes were very high-end without feeling too “blingy”. Service was at a business-class level from start to finish, especially with the way the wines were described, presented and poured. And the food was the best I’ve had in premium economy in terms of taste, presentation and quantity.’

He also rated the in-flight entertainment – ‘among the best in the industry and the new screens are large, high-quality and packed with shows and movies’.

There were some niggles, though.

‘The tray tables were a little too small, and not centred over the seat,’ said Ben. ‘And the headphones and blanket felt cheap and were the same as those offered in economy.’ 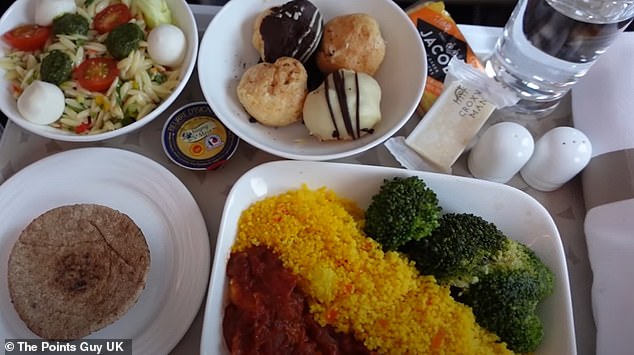 ‘The food was the best I’ve had in premium economy [above] in terms of taste, presentation and quantity,’ said Ben

Ben was also slightly put out by the tea and coffee being served in takeaway plastic cups, ‘rather than the real china used for the rest of the meal’.

The lack of an amenity kit was the final ‘downside’. 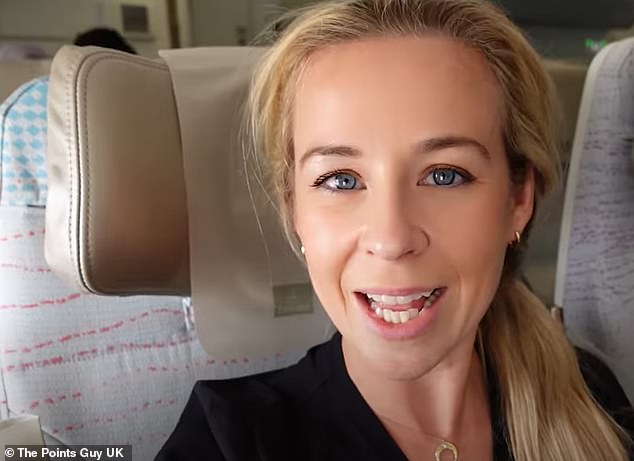 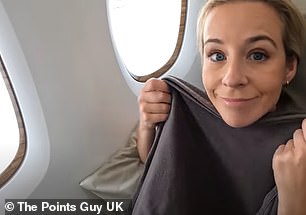 Maren said there were multiple plusses to the economy cabin

Sitting at the back in seat 84K was Maren, with her return from London costing The Points Guy UK £1,138.

She revealed that there were multiple plusses to the Emirates economy experience.

She said: ‘The tray table was large with a classy wood-grain finish, the seat-back entertainment screen was massive with loads of entertainment options and the butter chicken curry main course and lemon milk cake dessert were both tasty and well presented, and alcohol was complimentary.

She added: ‘You definitely feel like there’s a bit of luxury, even though you are in economy.’ 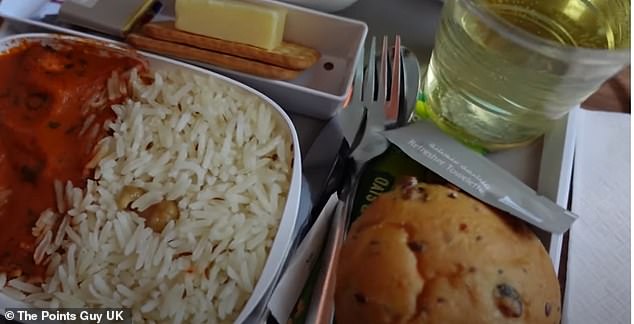 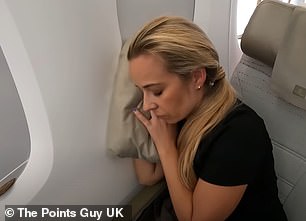 Maren tries to get some sleep

Any downs? A handful of minor issues.

Maren said: ‘It took quite some time for crew to answer the call bell [59 seconds], boarding was quite chaotic with so many passengers squeezing onto the world’s largest passenger aircraft – and the headphones weren’t great quality, or that comfortable.

For more information on travel tips and tricks, sign up to The Points Guy UK. To see the full Emirates A380 four-way cabin battle review video click here. 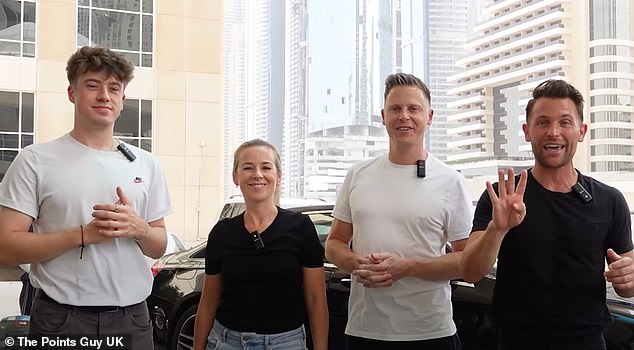 Ready, steady… Liam, Maren, Ben and Nicky at the start of their trip in Dubai