TfL, under control of London’s Mayor, has been running advertisements for Istanbul-based dental clinic Dentakay, which offers the ‘Hollywood Smile’ treatment.

The controversial dental procedure, made popular by stars such as Katie Price and Love Island’s Jack Fincham, involves filing down natural teeth to pegs then replacing them with crowns or veneers.

But numerous Britons say they have been left in pain and suffering complications by having the treatment abroad, where it is cheaper.

The resulting trend has been dubbed ‘Turkey Teeth’, though MailOnline is not aware that Dentakay has received any complaints from patients regarding the work they received and critics of the advertising said it was not an attack on the company, but the concept of encouraging treatment overseas where UK safeguards are not applicable.

UK dentists have previously warned the complications can leave patients with huge medical bills to fix work, with some even refusing to touch patients treated abroad because they do not want to take responsibility for them.

Dentakay’s ad, which has run on the Tube and buses, features a photo of a smiling woman with the text: ‘If you can’t smile back, you should fly to Istanbul. Book now.’

Transport for London, under control of London’s Mayor Sadiq Khan, has been criticised by UK dentists for hosting advertisements urging Britons to head overseas for cosmetic dental treatment

Crowns and veneers: What’s the difference?

Veneers and crowns are both dental treatments that can improve the look and function of your teeth.

The most significant difference between the two is that a veneer only covers part of the tooth while a crown covers the entire tooth.

A veneer is a very thin layer of porcelain, but can be made from other materials, and is usually chosen more for cosmetic purposes.

A crown is roughly twice as thick and covers the whole tooth in a far more invasive procedure than veneers because most of the tooth is removed to make room.

It can be made from porcelain, porcelain fused to a metal alloy or an all-metal alloy.

While crowns are also chosen for cosmetic purposes, they also offer a solution for those with conditions including broken, decayed or crooked teeth.

‘Questions should be asked on if TfL have done their due diligence on keeping potential patients safe,’ she added.

She said the fact that cosmetic dentistry was being advertised to thousands of people who use TfL services, without any warning, was not right.

‘People are being taken in by predatory marketing,’ she said.

‘It’s companies that are trying to make money on impressionable and often vulnerable people, who are unaware of the ramifications of what they are getting themselves into.

‘I’m not allowed to advertise like that to the under-18s yet you have a treatment there which isn’t general dentistry, it’s not your six month check-up… this is very aggressive, “keep it for life or have problems with it forever” dentistry.’

Dr Rowland-Warmann called for such ads to have a disclaimer on them warning people of overseas dental or cosmetic work.

‘It should come with a disclaimer the way gambling does,’ she said.

TfL did not confirm to MailOnline how much it earned from Dentakay’s adverts, but it is likely to be in the thousands.

The transport network outsources its ad space to independent companies and then takes a cut of the money.

One of these company listed the cost of TfL ad campaign of ‘significant impact’ of costing at least £5,000.

A TFL spokesperson said the advert aligned with their policies but added they were now seeking further clarification from the UK’s advertising watchdog.

‘This campaign was reviewed by our advertising partner and complies with the policy,’ they said.

‘We have also written to the Advertising Standards Authority for guidance on whether any additional disclaimers for such advertisements are required.’

A spokesperson for Dentakay said:  ‘We avoid the over-invasive interventions that some clinics offer, and are proud of the natural look that we achieve for our patients.

‘We have received over 4,000 reviews online from patients who give us an exceptional rating of 4.95 out of five. We have extremely low numbers of patients experiencing problems, and work to remedy any that arise.’

They added that British dentists shouldn’t criticise the standards of Turkish dentistry.

‘We have seen disturbing examples of patients let down by NHS care and unable to afford the high prices of private dentists in the UK,’ they said.

‘We have seen people who have been waiting years for treatment using alcohol to prevent tooth pain, and we have treated many who have resorted to pulling their own teeth out.’

The spokesperson added that as some 70 per cent of Dentakay’s customers now come from the UK it was natural that the company advertise there.

‘The content of the adverts is entirely uncontroversial,’ they said.

‘We recognise people have concerns about the safety of health tourism – though we would note that some of the criticism comes from expensive UK private clinics who are seeking to protect their own business and justify their high prices.

‘There are good and bad clinics anywhere, and we would suggest people should avoid clinics without a dental tourism certificate from the Turkish Ministry of Health.’

They added that all of the business’s dentists and had a minimum of five years experience and that the company insisted on world-class standards so criticism of them was ‘totally unwarranted’.

Turkey Teeth sprung to national attention this summer amid reports thousands of Britons were getting the procedure in their quest to get a celebrity-esque smile. 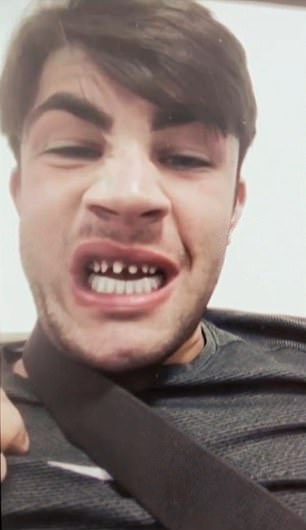 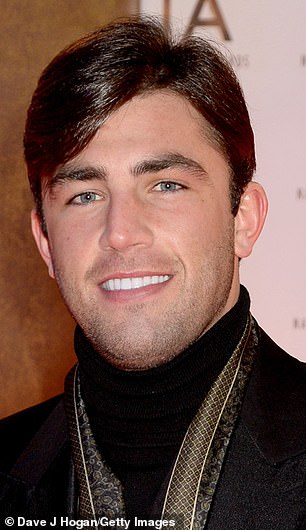 Love Island’s Jack Fincham was one of the first to share his Turkey Teeth story after getting the treatment before appearing on the ITV reality show in 2018. Pictured: Before and after 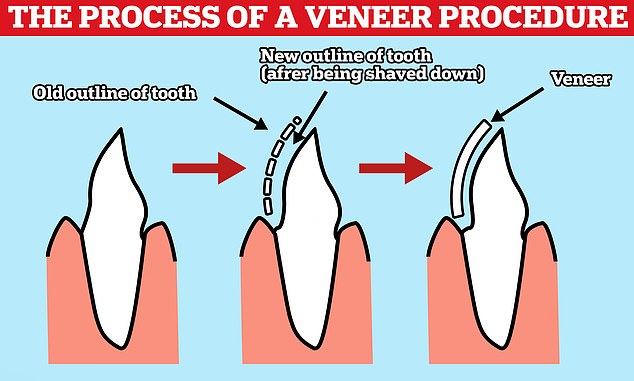 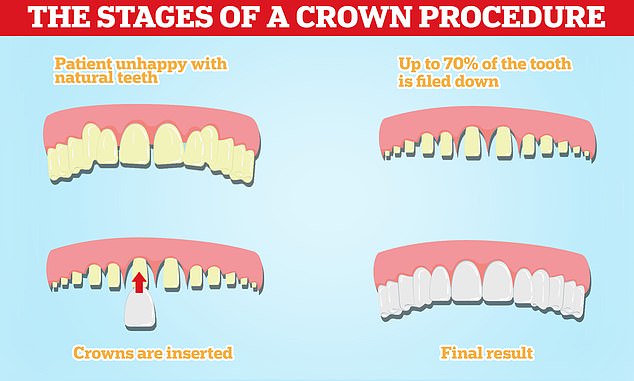 Interest in the procedure was fuelled on social media by the hashtag #Turkeyteeth on platforms such as TikTok where has been viewed more than 250million times.

But some people have claimed to have been given crowns by overseas dentists instead of the veneers they requested and being left in agony as a result.

While both veneers and crowns can improve the look and function of your teeth, the latter is far more invasive.

A veneer is a very thin layer of porcelain, but can be made from other materials, and is usually chosen more for cosmetic purposes.

Only a bit of the tooth is shaven down for the veneer to be placed on top of.

Whereas a crown is roughly twice as thick and covers the whole tooth. Most of the tooth is removed to make room.

Dentakay boasts on its website that it can offer the treatment within a single day, and at far cheaper cost than dentists in the UK.

Similar procedure in the UK can cost up to £500 per tooth, whereas Dentakay says that in Turkey it can cost as little as £850 for an entire set of teeth.

Dr Rowland-Warmann added that it was important to highlight the issue was not with a single company but with the industry as whole.

‘We’ve got to be careful about not letting xenophobia or nationalism cloud our opinions,’ she said.

‘Not all dentists in Turkey are bad, the vast majority are wonderful and ethical.

‘It’s bad dentistry that we’re talking about, not foreign dentistry.’

Dr Rowland-Warmann added that UK dentists are held to a high ethical and regulatory standard which allows patients financial support if things go wrong, a system not always present overseas.