Danielle Laidley fought back tears as she reflected on the strained relationship she shares with her three adult children following her transition to becoming a woman.

In a tell-all interview with 60 Minutes that aired on Sunday night, the 55-year-old AFL legend revealed she’s been dressing up in woman’s clothes in secret for most of her life and remains hopeful the bond with her loved ones will improve.

‘All I can say is, in God’s time, we’ll be a family again,’ Laidley said through tears.

‘They have endured enough. And one day, hopefully, in a few years’ time we’re sitting back here and we’re all in a great place.

‘It leaves a huge hole in my heart. They’ve been my life.’

Laidley said she was confident there was time to repair the fractured relationship with her three adult children, daughters Molly and Brooke and her son Kane.

‘There’s no rush. I’m not going anywhere for a long time,’ she told the program.

The news of Laidley’s transition first came to light after Victorian police officers leaked photos of her after she was arrested in May, 2020.

The officers who took her into custody leaked a photo of her wearing a dress, wig and make-up onto social media which quickly went viral.

Laidley was charged with stalking and breaching a family violence order, which resulted in an 18-month good behaviour bond without a conviction or fine.

However, the pain the photos caused her and her family was hard to reconcile.

‘The photos were an invasion of privacy,’ she told reporter Sarah Abo. 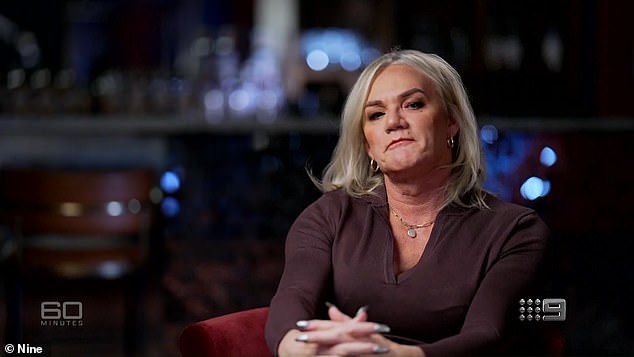 ‘I was living a quiet life, I got lost and went off the rails for the first time in my life and it was very embarrassing for me.

In a lengthy piece for the Sunday Herald Sun, Laidley said she had first applied ‘Coca-Cola red’ nail polish when she was just six years old and had been wearing makeup and dressing as a woman in secret since the 1990s. 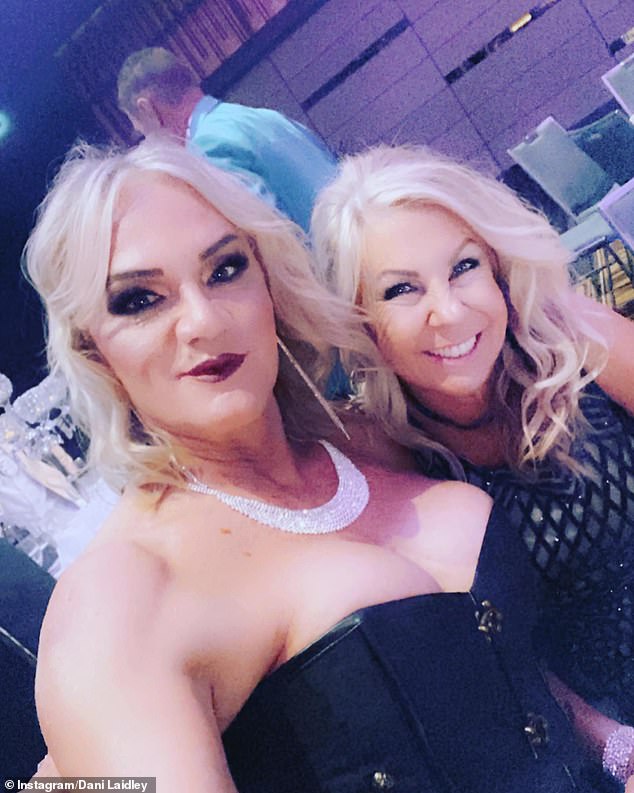 Dani Laidley with childhood sweetheart Donna Leckie. Laidley has opened up about her transition to a woman in a tell-all interview with 60 Minutes 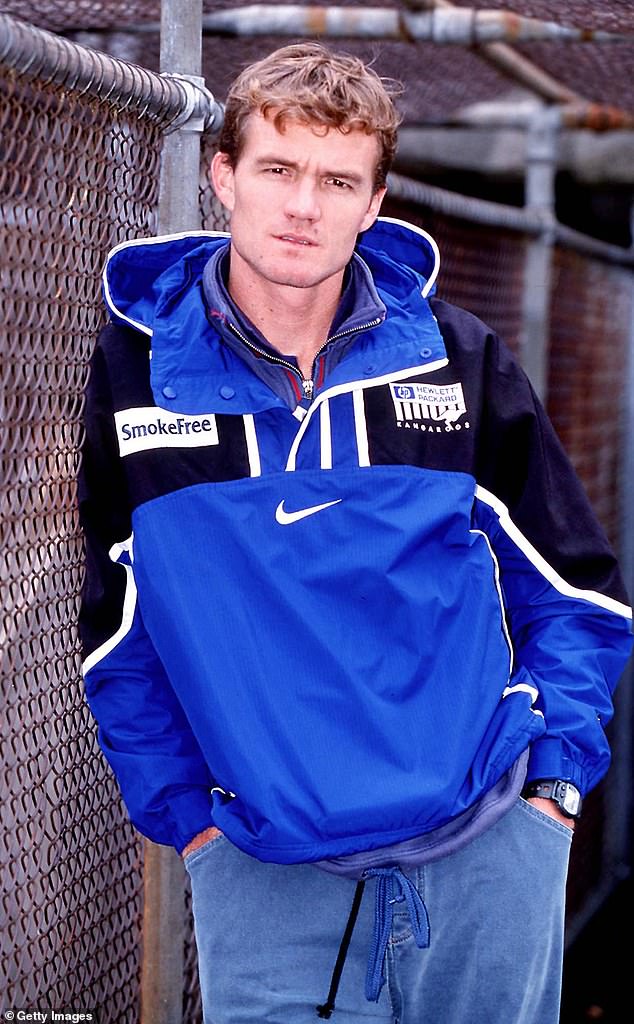 In the 1990s, Laidley said she would take every private moment she had to explore her gender identity despite feeling guilty she was taking time away from her wife, children and the West Coast Eagles.

She kept a garbage bag full of dresses and makeup in a hole in her ceiling and one day decided she would make her first public appearance as a woman.

‘I have a few precious hours to myself today, and I’m planning to use them well. I’m going to finally indulge a desire that’s gone unmet for years now,’ she recalled.

‘I find the outfit I like most, the makeup that looks just right, blow a kiss into the mirror and walk out of my front door.’

Laidley forced herself to do a lap of Perth’s Subiaco markets before becoming overwhelmed by the ‘dizzying’ experience and retreating to her car.

In 1992, she made friends with a group of transgender women who understood all too well her emotional pain from gender dysphoria – a person’s feeling of unease that there is mismatch between their biological sex and gender identity. 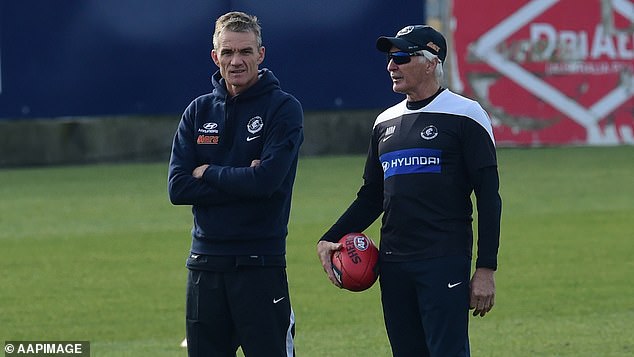 While Laidley (left with Mike Malthouse) was a special guest in commentary on Triple M for the Western Bulldogs and Hawthorn, she said she has no plans on formally returning to the sport 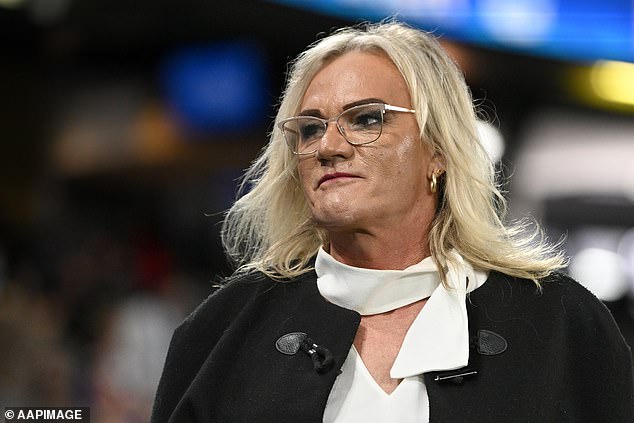 Laidley was 25-years-old with a wife and children, but had travelled to a club in Prahran, an inner-city suburb in Melbourne, to relish in being her true self.

‘They ask me about my life outside footy and they make no assumptions. A trans person probably feels imprisoned by their partner, right?’ she wrote.

‘They’ve gotta feel boxed in by their kids, yeah? Nah. I love my wife. I adore my children. The girls understand these seeming contradictions and complications.’

Laidley said she had found love with her high school sweetheart Donna Leckie.

‘We’re only just getting started. We’re working really hard to enjoy our lives and have our family around us,’ she said – adding her affinity for women has not changed.

‘Our sex is the bits that we’re born with and our sexuality is who we are attracted to.’ 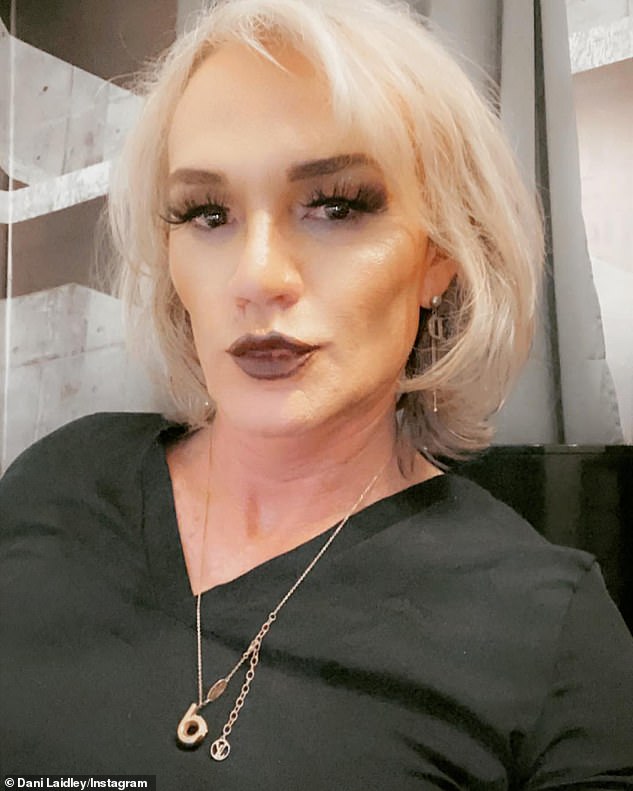 While it was only five years ago that Laidley received a formal diagnosis of gender dysphoria and only 2020 when the transition process began, it’s something the former ALF player and coach has struggled with for a long time.

Despite the hardship she has felt ‘unconditionally’ supported by the AFL since her transition, a community she has been involved with for over 30 years.

However fearful she is of being judged, she hopes to be a role model for future generations and pave the way for other transgender sports players.

‘There’s going to be a few punches on the nose. First person in any change ends up bloody and marred,’ Laidley said.

‘If that has to be me for the next generation, I’m the one, and I’m happy about that.’

Laidley was born Dean James Laidey and played 151 AFL games for West Coast Eagles and North Melbourne before carving out a 149-game coaching career with the Kangaroos.

While Laidley was a special guest in commentary on Triple M for the Western Bulldogs and Hawthorn, she said she has no plans on formally returning to the sport.

For now, she is happy to just enjoy her football and her position as a role model in the transgender community.