Fresh hell for commuters as trains out of London King’s Cross to Edinburgh, Leeds, Lincoln and Bradford are cancelled due to overhead power line damage

Trains out of of London King’s Cross to Edinburgh, Leeds, Lincoln and Bradford have been cancelled in fresh hell for commuters.

All trains out of the major station in London were cancelled at around 5.30pm this afternoon after damage to overhead electric wires in Biggleswade, Bedfordshire.

The overhead lines were entangled on a train, pulling neighbouring lines and lowering them.

Engineers are on site but disruption between London and Peterborough and Cambridge is expected to continue until the end of the day.

Commuters are facing fresh hell after damage to overhead electric wires in Biggleswade, Bedfordshire, cause all trains coming out of London’s Kings Cross to be cancelled this afternoon. Pictured: Customers on an LNER service exit the train after it is halted 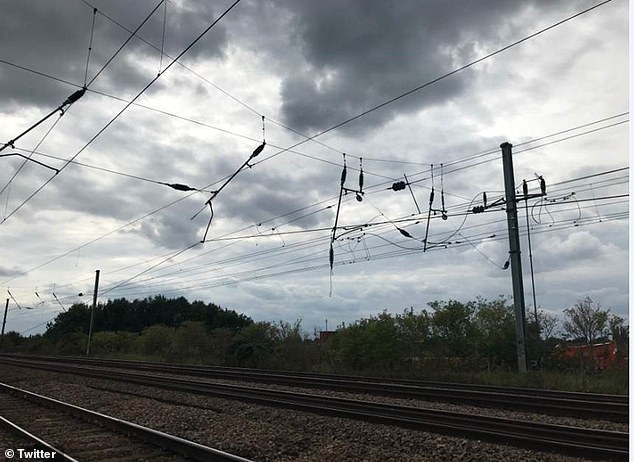 The overhead lines (pictured) were entangled on a train, pulling neighbouring lines and lowering them

Grand Central trains between London Kings Cross and Bradford Interchange and Sunderland have also been affected.

Trains are currently unable to run between Stevenage, Hitchin and Peterborough.

The line between Hitchin and Cambridge has now reopened and trains will begin to operate between these stations but journey times may be extended by up to 90 minutes.

Managing Director of LNER David Horner said: ‘My apologies to LNER customers affected by this afternoon’s disruption at Biggleswade due to damage to the overhead electric wires.

‘Engineers are on site but we expect the disruption will continue for the rest of today.’

LNER said: ‘Overhead lines form the power supply that move trains. Earlier today, these got entangled on a train, and also pulled neighbouring lines, lowering them. 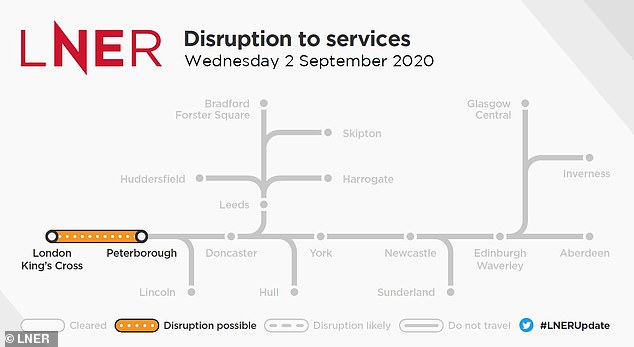 ‘This essentially meant trains are unable to move. Network Rail are currently assessing the damage.

‘Attempts are currently being made to reopen the line towards Cambridge.

‘This incident will have a severe impact on services to/from Peterborough, with work required overnight to resolve the issue.

‘Therefore, you may wish to look at alternative travel arrangements for any journeys on this route.’

Great Northern and Thameslink are advising passengers to not travel at this time.