EXPRESS INFORMER > Health & Medicine > Trainee flight attendant, 22, who had no clue she was pregnant gave birth on the loo

A new mum has revealed how she had a shock birth on the toilet at her parents’ home after not realising she was pregnant.

Trainee cabin crew Lucy Jones, 22, from Bristol, dramatically gave birth to her daughter, Ruby, in March this year – having assumed that her backache was down to period pains.

The 22-year-old worked 70 hour weeks, went clubbing multiple times and still had regular periods – and was taking the contraceptive pill – in the months before giving birth to her baby daughter Ruby, who was delivered at full term.

As a trainee flight attendant, she’d also passed a ‘fit to fly’ medical – including two pregnancy tests – declaring that she was safe to work at 30,000ft just a month before giving birth.

Describing the ‘terrifying’ moment her daughter arrived, Lucy said she felt her stomach ‘flip’ while she was in bed, and after dashing to the toilet she felt a ‘crash’ – only to look down and discover ‘two feet sticking out’ of the toilet bowl.

Spring surprise: Trainee flight attendant Lucy Jones, 22, from Bristol had passed a ‘fit to fly’ medical – including two pregnancy tests – declaring she was safe to work at 30,000ft 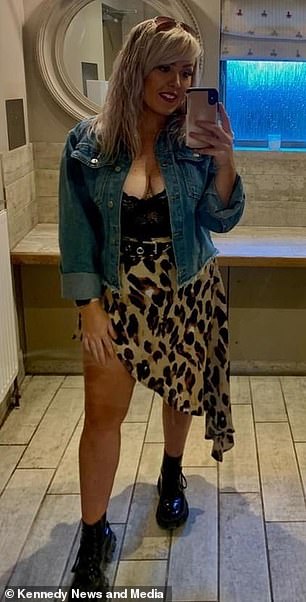 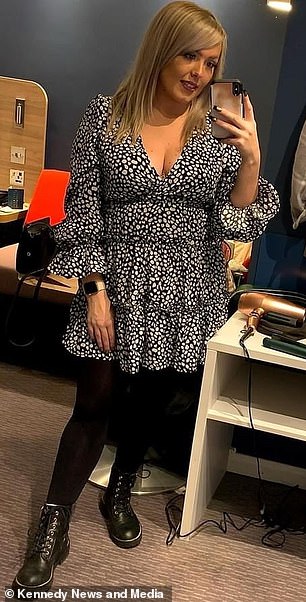 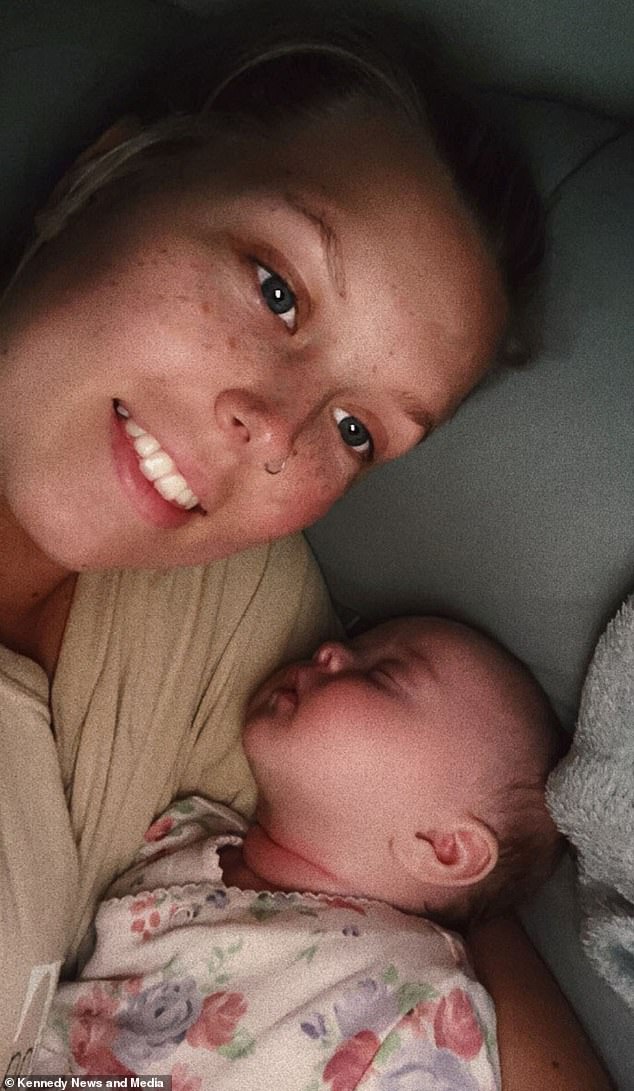 Duck to water: The new mum says that despite Ruby not being expected, she’s loving being her mum

Despite her now four-month-old daughter Ruby ‘magically arriving’ with no notice, Lucy said she’s taken to motherhood like a ‘duck to water’ and wouldn’t change anything for the world.

Photos captured by the mum-of-one before the life-changing trip to the loo show her out clubbing with a drink in hand blissfully unaware she was expecting – as she dons tight-fitting shift dresses with no sign of a bump.

After a whirlwind experience, the devoted mum is now keen to raise awareness that cryptic pregnancies, which is when a woman is unaware that she is pregnant, can and do happen.

Lucy, of Bristol, said: ‘I had no bump, no sickness and had a period every month.

‘I had two negative pregnancy tests, because of my new cabin crew job I had to take them for that.

‘I would have been eight months pregnant when I went for my medical and did the pregnancy tests.

‘He [the doctor] pressed all down my stomach and body, and he suspected nothing. I was still taking the pill. I took it every day and had been on it for six or seven years.

‘I went up one dress size after Christmas and then I went back down again, and I put that down to eating and drinking a lot.’

Lucy claims she received her fit to fly certificate the month before she gave birth. 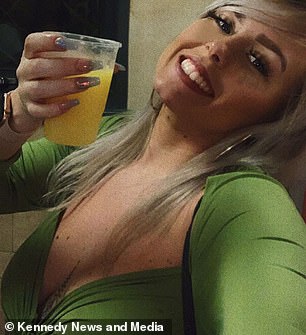 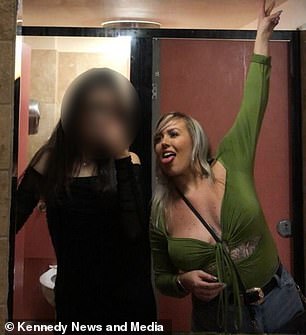 Snaps of Lucy taken enjoying a night on the tiles with friends; the 22-year-old says she drank alcohol throughout her pregnancy, not realising she was expecting daughter Ruby 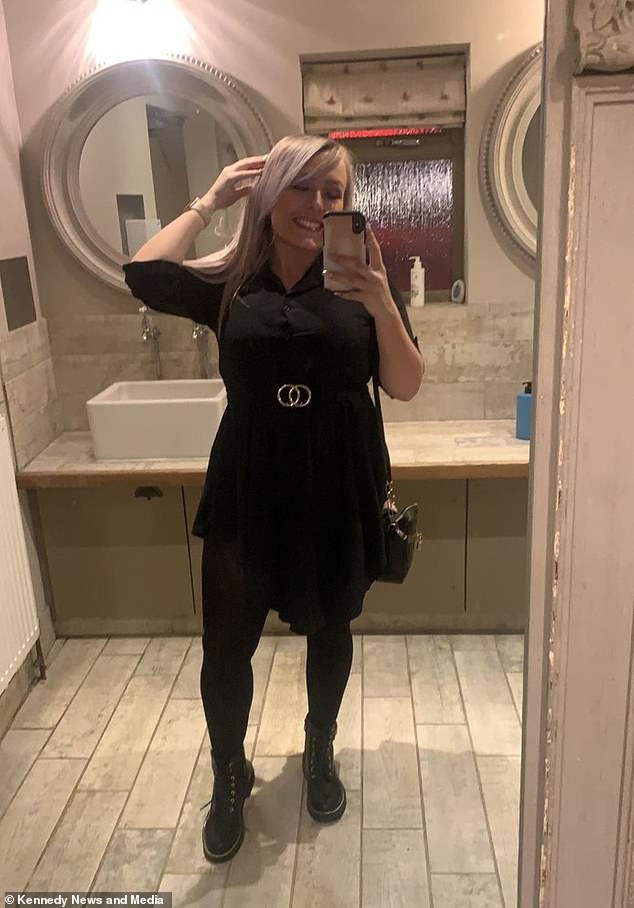 At five-and-a-half months pregnant; the trainee flight attendant says she had two negative pregnancy tests as part of a fit to fly medical

She said she’d often work long hours as a pub manager and had her last shift just ten days before having Ruby.

Lucy said: ‘I did a weeks training [for cabin crew] came home for two days and that’s when she magically arrived.

I went up one dress size after Christmas and then I went back down again, and I put that down to eating and drinking a lot…

‘I had tummy and back ache the night before but I was due my period at the end of the week so just put it down to that.

‘I woke up in the morning, had a bath and just thought I’d sleep it off before I went back to Bristol for work.

‘I was in bed for about 45 minutes and it felt like my stomach flipped, it’s the only way I can describe it, and I just felt like I needed a poo.’ 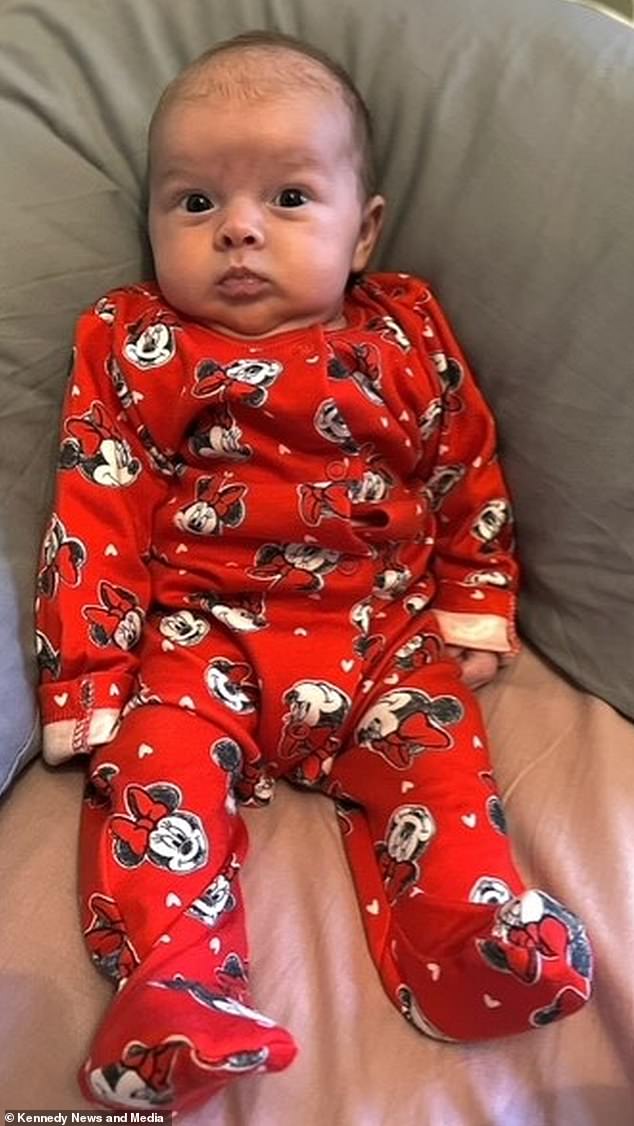 Ruby pictured recently; she arrived in March and shocked doctors and Lucy, who says she was taking the contraceptive pill throughout her pregnancy and had a period monthly 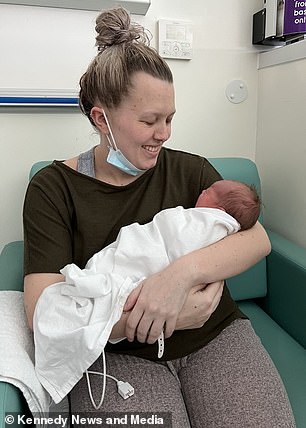 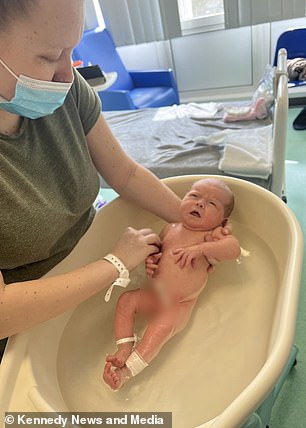 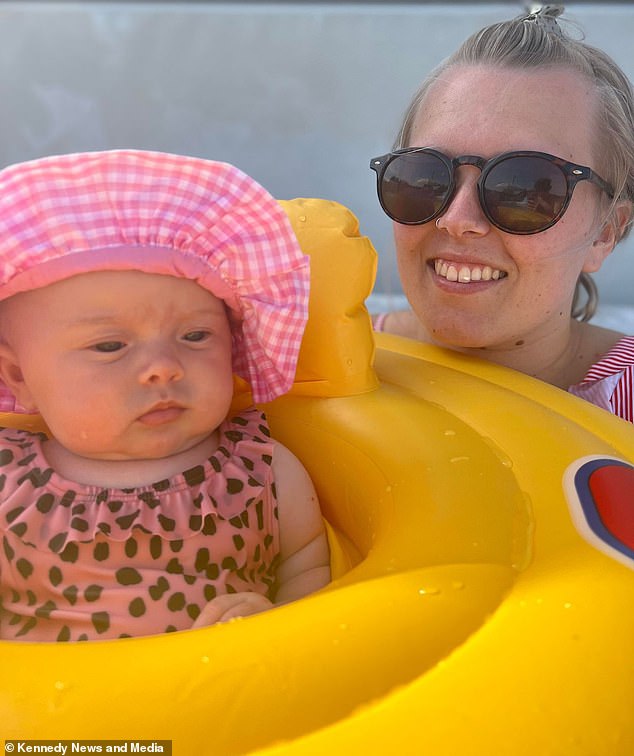 Back on the pill: Lucy’s Dad told her, ‘If you any more, I’d like at least nine months notice.’

The new mum pictured just eight weeks after giving birth – she says she’d always thought people couldn’t not know they were pregnant, until it happened to her

She continued: ‘I ran to the toilet and gave birth to my daughter in the toilet at home by myself. I heard a crash and looked down and there was two feet sticking out of the toilet.

‘I didn’t have any pain. No-one could believe that. I had my back ache and tummy ache but there wasn’t actually any pain when I was physically, what I thought was pushing out a poo.’

Lucy said she wrapped her daughter in a towel before placing her in the kitchen sink.

She was home alone at the time, called her dad and her parents arrived back around ten minutes later.

They also rang for an ambulance while they were on their way. Lucy said: ‘I had no idea I was pregnant until I saw the baby in the toilet. 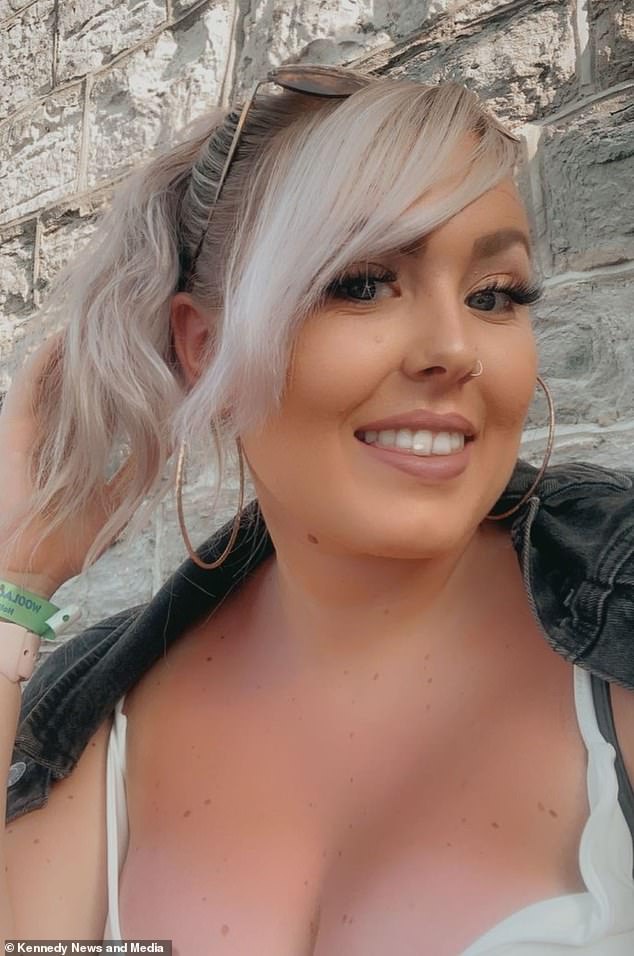 Lucy says she lived an active life, including personal training sessions in the months she was pregnant, adding: ‘I went clubbing in Bristol the Saturday before I gave birth.’ 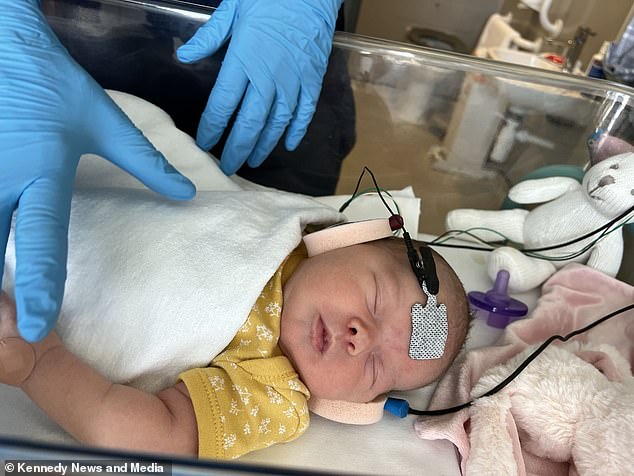 Despite worrying that her dramatic birth meant her little girl might have had early health issues, she was quickly declared fit and well by doctors

‘I was hysterically screaming saying ‘there’s a baby’ and they were expecting there to be a miscarriage, not a full-sized seven-pound baby in their kitchen sink.

‘I was terrified. I didn’t know what had hit me. It was just the shock. I felt numb in a way.

She revealed that when her parents walked through the door ‘it all went a bit blurry because I think the shock just took over’ and her next memory is being in hospital with her new baby.

‘Dad described the kitchen – it just looked like a murder scene because when I’d ran from the toilet to the kitchen to get my phone the cord had snapped and there was just blood leaking out. It was up the walls, the door, fridge and freezer.’ 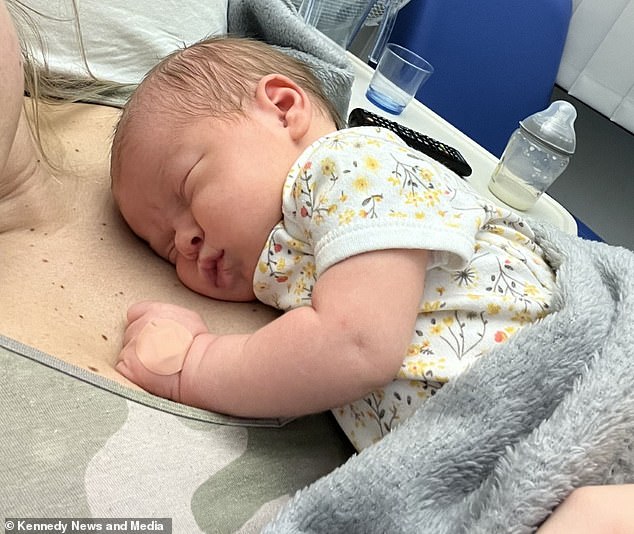 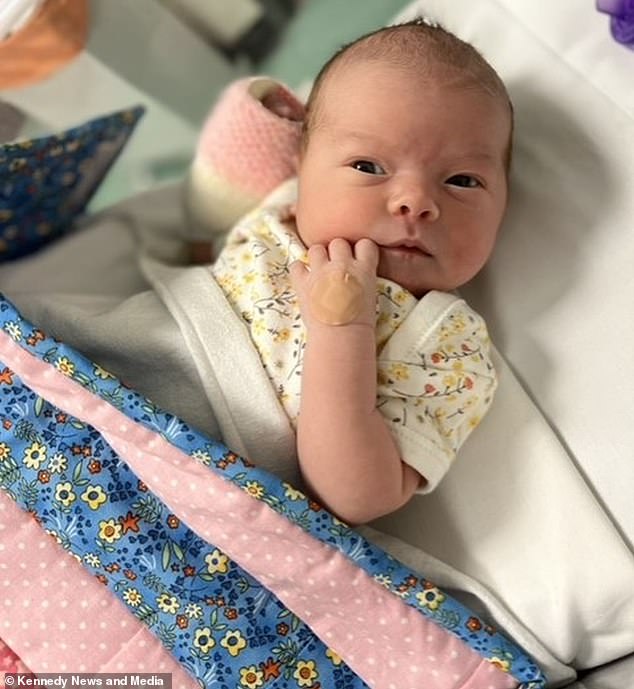 Shock: ‘Even now as a family, we still can’t get our heads around what happened. There’s still moments where we’re like “wow”‘

Shortly after the paramedics arrived, Lucy was dashed to hospital in an ambulance.

Lucy said: ‘Properly holding her for the first time felt weird. I’d held babies, but never my own. Probably on day four or five it became reality.

‘My dad rang around the family and when he told everyone there was just like silence on the phone, noone could believe it.

‘Even now as a family, we still can’t get our heads around what happened. There’s still moments where we’re like ‘wow’.

‘It’s one of the stories that you read about, but you never think it would be you, your friend or someone you know.’

I was still doing everything – going out drinking, partying, to festivals and the horse racing…

But stopped once she’d started her training and last went to the gym around two to three weeks before giving birth.

Lucy said: ‘I was still doing everything – going out drinking, partying, to festivals and the horse racing.

‘In my personal training sessions I’d be doing squats, sit ups, press ups on the rowing machine and the bike and lifting weights. 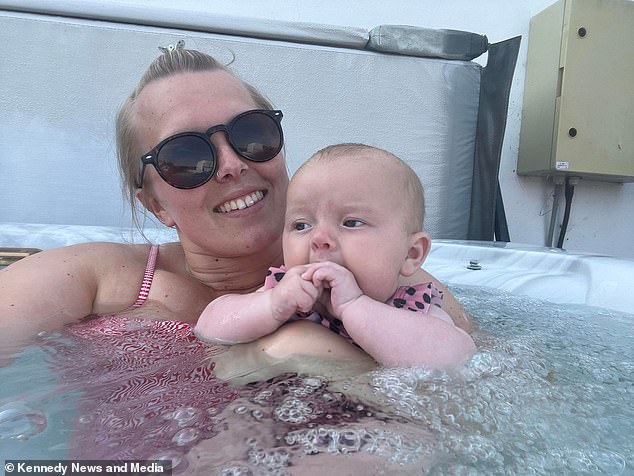 ‘If I had a drink I’d sometimes socially smoke, but not every time I was drinking. I roughly had four cigarettes a month if that.’

She said she’s adapted to pregnancy like ‘a duck to water’.

Lucy described her little girl as ‘happy, content and chilled’. She said: ‘I think I’ve done alright, I’ve adapted pretty well [to motherhood] and had to adapt pretty quickly obviously.’

‘You don’t believe it and you sort of shame upon other people thinking ‘how did they not know that they were pregnant?’ Whereas now I’ve actually lived through it, I kind of regret thinking that as I know what other people have been through now. It is a real thing, it does happen.’

‘I’ve gone on the injection now, so hopefully I won’t have any more surprises. Like my dad said, if I have any more he’d like at least nine months notice.’