Canadians who are interested in learning to code but are short on cash can now trade a stake in their future earnings for an education.

Toronto-based HackerYou College of Technology is launching a new payment option known as an Income Share Agreement, an arrangement that essentially enables a student to go to school for free in exchange for handing over a predetermined portion of their earnings later on.

Students who choose the ISA option at HackerYou would pay $1 up front for a nine-week, full-time web development boot camp program that otherwise costs $12,000. Once a graduate earns a before-tax salary of $50,000 a year or, they would be required to pay the school back 17 per cent of their income for 24 months.

CEO Heather Payne says she hopes ISAs can help make her school accessible to a more diverse group of students.

“There are way more people who we think could be amazing professional developers than just the ones who have $12,000 in their bank account,” said Payne.

A HackerYou graduate who earns exactly $50,000 a year would end up paying $17,000 in tuition at the end of two years of payments.

If a student doesn’t get a job that reaches the $50,000 per year threshold within five years of graduating, they are off the hook and don’t have to pay the school back.

However, successful graduates could end up paying 250 per cent of the standard tuition cost, because the cap for payback is $30,000.

Some coding schools in the U.S. already run similar programs, such as the Silicon Valley-based online learning startup Lambda School that recently caught the attention of venture capitalists, who pooled $30 million US to fund the school’s expansion plans.

HackerYou is taking on the financial risk of the ISAs by tapping into the private college’s profit as well as a loan from the Business Development Bank of Canada.

Students attending private colleges can sometimes get government-backed student loans, but Payne says HackerYou’s boot camp is ineligible because the program is too short.

Bruce Sellery, a personal finance expert, author and host of the SiriusXM radio show Moolala: Money Made Simple, says it’s encouraging to see people try to innovate and tackle the problem of education affordability, but he questions whether this is the answer for those pursuing jobs in the tech industry.

“This is insurance you don’t need,” according to Sellery.

He says students would essentially be paying a premium for a safety net, but the industry seems to be hungry for workers to fill good-paying jobs.

“Unless the headlines are lying, everybody is looking for coders,” said Sellery.

Sellery said graduates could be confident in their ability to pay off a personal loan in a controlled, set amount that doesn’t fluctuate based on their income.

HackerYou says in 2017 it enrolled 135 full-time students and had a graduation rate of 98.5 per cent. In a survey of graduates, the school estimates 97 per cent got a job — most of them in the first three months after graduating.

HackerYou graduates’ average starting salary in a permanent position is $53,872, accoring to the survey. If the average graduate used an ISA, they would pay $6,000 above the $12,000 tuition.

Payne acknowledges that paying up front is the cheapest way to fund an education at HackerYou, whether it’s through savings or a personal loan, but she believes the ISAs will make it easier for some people to take the plunge.

“It’s my hypothesis that there is a lot of people who are not taking our program even if they potentially had the money or could get a loan because of their risk appetite,” said Payne.

Jeannie Ly, 32, is currently taking a two-week JavaScript course at HackerYou, but says she would’ve opted for the more expensive nine-week boot  camp if the ISA had been an option earlier.

“It would’ve been huge,” said Ly, who takes unpaid time off from her current job to further her education and also pays tuition for the course. 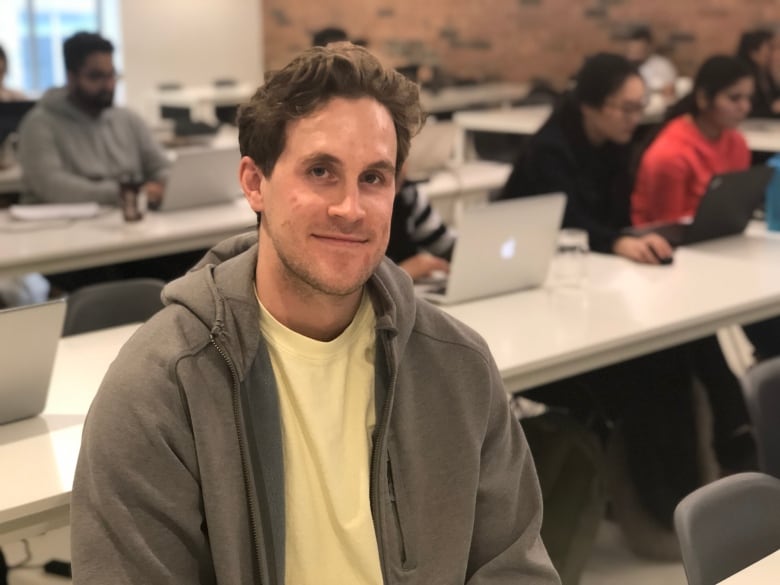 Marli Dunker isn’t sure whether he’ll use HackerYou’s new ISA, but thinks it’s a good option for students to have. (Laura MacNaughton/CBC)

Marli Dunker, 27, already has a philosophy degree, and recently worked for a cryptocurrency company, but he felt he needed to reinvent himself when the crypto market cooled off. He plans to enrol in HackerYou’s boot camp, but he’s still on the fence as to whether he’ll use the ISA option.

“The best part is, is there’s now a choice where there wasn’t one,” said Dunker. “It’s a big decision to make a career turn, and it makes it a little bit easier knowing that you don’t have to dig deep into your pockets — immediately, at least.”

While there is criticism of ISAs for being a form of indentured servitude, Payne is optimistic that they could be part of the future for education.

“I wish that when I went to school I could’ve said, ‘I’ll pay you a dollar and let’s see what you do for me, and I’d be happy to pay you back based on the success that I feel.”

She acknowledges that not all schools would be willing to bet on the employment outcomes of their graduates — but that could spur some to make changes.

“I actually feel that it’s irresponsible to train a student in a skill, major or vocation where there are not job prospects,” she said.