If only sex was like it is in the movies.

The lighting is perfect, undressing is elegant, our body parts do what they’re supposed to and everything runs exactly to plan.

Real life sex is so far removed from this, it’s hard to imagine it’s the same activity.

Messy, sweaty, unpredictable and often unflattering, there’s a LOT that can go wrong during sex and a multitude of excruciatingly embarrassing scenarios waiting to strike.

Happily, most are easily resolved with education, calm and communication.

Here’s how to keep your cool when disaster strikes.

Women are timid around penises that aren’t very hard.

We’ll grab onto it with gusto when it’s solid and stiff but switch to a nervous, tentative touch the second there’s any sign of softness.

In fact, the opposite should happen.

If he’s only semi-erect, he’ll appreciate a firm grip and firm massaging. Combine this with the right attitude – that it happens all the time and so isn’t a big deal – and all will be solved. 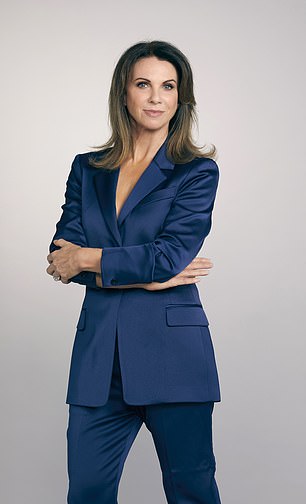 Tracey Cox says that when things can wrong, they can easily be resolved with communication and education

It doesn’t need to be fully erect to penetrate – use your fingers to stuff him inside and keep your hand there to make sure he doesn’t fall out. Massage his testicles as he thrusts slow and steady to start with and if you can reach, firmly massage the perineum with the pads of your fingers.

Above all, keep the (mental) pressure off and let him know you’re completely unperturbed. If the relationship is new and he’s had erection problems in the past, could be he just needs time to feel comfortable with you.

All women get wet when they are aroused, right?

It’s a myth both men and women fall for – and it’s false.

So many things affect vaginal lubrication, it’s amazing it happens at all. Cold and flu medication, prescription medication, drinking too much alcohol, being dehydrated, where you’re at in your menstrual cycle, feeling stressed, tired or anxious, not enough foreplay, ineffective technique – all these things affect lubrication.

Another factor is genetics. It’s unlikely your grandmother or Mum told you about their dry vagina, but they should have.

If you’re anxious about it happening, you can insert some lube high into the vagina before you start having sex and let the warmth of your body pull it downward.

Otherwise, if this happens with a long-term partner, simply tell them the reason why you think you aren’t lubricating (‘That was a big night last night. I’m dehydrated so we’ll have to use lube’), reach into the bedside drawer where you keep it and apply (or get them to).

If you need to educate your partner about the many reasons why lubrication doesn’t just happen, do it after sex is over.

If it’s a new relationship, stop and say, ‘I’m a bit dry today. Do you have any lube?’. If they don’t, saliva (theirs or yours) is a good back-up.

Again, unless your partner appears offended by what’s happening, you can save the why-that-happens chat for when you’re finished. If they do, stop having sex and explain right there and then.

A toy or condom gets lost

Have your own horror story to tell?

‘I was travelling around Bali with my girlfriend and unaware that she had ‘Bali Belly’ – diarrhoea from eating the street food. She didn’t want to ruin the romance by admitting to it – and the unspeakable happened as I was giving her oral sex.’

‘I’d just left my marriage and was eager to enjoy some casual sex. I got chatting to a hot guy in a bar and took him home with me. The sex was fantastic but immediately after we finished, he burst into tears. Turned out he’d had a fight with his girlfriend and felt guilty about what he’d just done.’

‘I was getting a BJ from a girl I’d never had sex with before. It hurt a little at the start, which was odd, but I still climaxed. When we turned the lights on, we got the shock of our lives. There was blood everywhere. She had a snaggle-tooth that ripped my foreskin to pieces.’

‘I had a coughing fit in the middle of sex that was so violent, it not only pushed him out of me at the crucial moment, pee came out as well.’

‘Does any guy really think we fall for the ‘Ooops! Wrong hole!’ thing? I’ve never felt pain like it and don’t believe he didn’t mean to do it.’

‘I went down on a girl who clearly had some health issues going on. She smelt foul. I visibly recoiled and she noticed so I had to tell her. I couldn’t have gone anywhere near her anyway.’

‘I was planning on leaving my husband but hadn’t told him officially yet. He was meant to be away on a boy’s weekend but came back unexpectedly – to find me having sex, in the marital bed, with a friend of mine. He turned on the light, looked at us for one second, then turned it off and shut the door. I have never felt so ashamed in my entire life.’

Out of the two, it’s less of a problem if something’s lodged high in the vagina because there’s an ‘end’ to it. Chances are the sneaky little condom or love egg is hiding above or behind the cervix. Simply fish around with your fingers until you find something that feels like the top of your nose and hook your fingers around to feel in the nook behind it.

It’s hard not to panic if this does happen, but the best thing to do is simply to wait for your next bowel movement and see if it makes a reappearance. If it doesn’t, or you experience any sort of fever, abdominal pain or start to bleed, it’s off to the emergency ward immediately. Yes, it will be humiliating to explain but believe me, they’ve seen far worse than this.

Your body makes an embarrassing noise

An unfortunate (or fortunate, depending on how you look at it) by-product of sex is that it’s brilliant at releasing trapped gas.

‘Queefs’ happen when air is pushed into the vagina by his penis – especially if he pulls back too far before re-entering – only to be expelled in a most unseemly manner.

Regardless of where or how it happens, it helps to recognise that we’re human beings. Our bodies make weird noises when they’re doing their stuff.

There is only one way to react if one of you burps, farts or queefs – laugh! Why not? It’s amusing.

Laughing instantly dispels any embarrassment and makes you feel closer. You can relax and enjoy sex completely when you know an unwanted noise isn’t an issue.

Someone walks in on you

The degree of humiliation and awkwardness depends on who walks in and who you’re having sex with.

Being caught ‘in flagrante’ with your lover by your husband is a different scenario than your flatmate walking in during a one nighter.

Assuming you’re not cheating, the first thing to realise is the person walking in is probably more embarrassed than you are.

Humour (as always) helps, but so does letting them know it’s not their fault they caught you.

Prevention is better than a cure for this one.

Lock the door if there’s a lock. Have a sign or signal that other people sharing the house know means not to disturb you. Be aware of roaming relatives/friends that might be in search of a spare pillow on group holidays.

If there is a chance someone might come in, choose sexual positions you can untangle from easily. If it’s bedtime and you’re under the covers, have intercourse ‘spoon’ style. You look like you’re hugging and no-one’s any the wiser. Keep as many clothes on as possible, avoid oral sex (ever tried to come up with a sensible reason why your head is where it is, other than what’s actually happening?) and instead use hand stimulation.

He falls out all the time

It could be because you’ve used too much lube or you’re very wet – both easily fixed by using a tissue or small towel to wipe away the excess.

The position, size of his penis and thrusting style are also factors. If his penis is quite short and he thrusts long – pulling back on each stroke rather than staying deep – it’s bound to happen. The bigger he is and the closer he holds you, the less likely he is to fall out.

Hold him close by grabbing onto his buttock cheeks or wrapping your legs tightly around him. Or reach around with your hand and hold onto the base of his penis to keep him inside.

Does his erection point a particular way? Most point up but some stick straight out or point downward. Choose your position for intercourse accordingly, bearing in mind your vagina curves up toward your tummy.

You (or they) say someone else’s name

There’s a reason why most of us stick with moaning and groaning – it gets you in a lot less trouble.

Saying someone else’s name can seem like a momentous, unfixable faux pas but, truth is, it’s mostly habit that causes us to do it more than a longing to be back with that person.

If one of you just came out of a long-term relationship, it’s particularly understandable if the wrong name gets blurted.

Apologise profusely, explain that it’s habit rather than a desire to be with your ex, continue to reassure and all should be forgotten in a few days.

Harder to get out of is saying the name of someone your partner has never heard of (an affair?); even worse the name of the best friend your partner is convinced (and now knows) you lust after.

It’s still not proof that someone is cheating, or even wants to, however. If your gut instinct tells you it was a mistake, your partner is mortified and shows and tells you they love you, I’d give them the benefit of the doubt.

He can’t climax through intercourse

His most reliable and frequent orgasms are nearly always DIY, by hand – his hand. If he’s not orgasming easily through intercourse, it’s often because he needs a specific stroke that he uses and only a hand can provide. Your vagina can’t replicate firm, rhythmic tugging, for instance (kegel exercises work to a point but they’re not that good).

Add the extra stimulation he needs by holding him firmly around the base the next time he penetrates and use your hand to slide up and down his penis as he slides up and down inside you.

Have sex at a tourist destination, master the ‘wheelbarrow’ and fantasies about other people…these are the New Year sex resolutions Tracey Cox says you NEED to make

Try ‘edging’, triple foreplay and use his penis as a sex toy: Tracey Cox reveals 21 PROVEN ways to get your man to last longer in bed

How to make a unforgettable first impression in bed! Men tell Tracey Cox the seven things they wish women would do