A toxic chemical found in lunchboxes and other household plastics raise the risk of womb tumors, a study has found.

The non-cancerous growths are common — affecting about eight in ten women in their lifetime — and normally harmless, often going unnoticed.

But in up to a quarter of cases they grow so large they cause fertility issues and miscarriages — requiring complex surgery to remove.

Researchers at Northwestern University looked at 712 pre-menopausal women and their exposure to diethylhexyl pthalate (DEHP), which is used to strengthen plastics.

They found a ‘strong association’ between higher levels of DEHP and the risk of developing large fibroids that cause symptoms.

In a lab experiment, the researchers showed DEHP activates a process that causes fibroid tumors to grow more quickly.

Because DEHP was classed as a ‘reproductive toxicant’ – meaning it could damage fertility – it was banned under European law in 2015.

But it is still used in many consumer goods in the US.

Chemicals used in plastics to make them more durable and flexible could raise the risk of women developing uterine tumors, a study suggests (file photo) 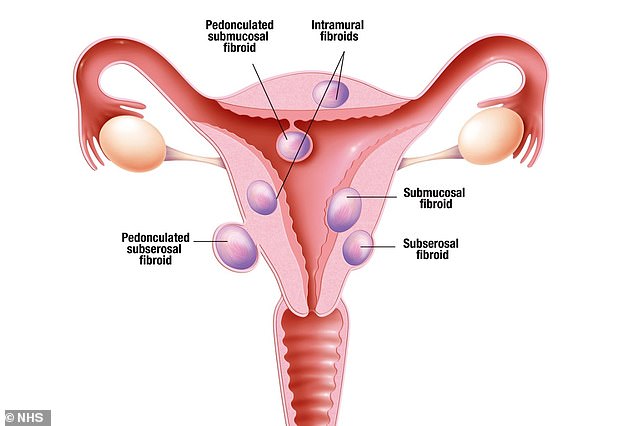 Uterine tumors are common, affecting eight in ten women, and normally trigger no symptoms. They can range in size from a pea to a watermelon. The above diagram shows where they may grow within the uterus

DEHP is used in plastics to improve their flexibility and durability, including in food packaging, shower curtains, plastic toys and others. It is also used in some cosmetics.

Over time, the particles can shave off and settle as dust, where they may be breathed in or ingested by people.

Maine and Vermont have completely outlawed the use of several phthalates including DEHP in food packaging, but no federal law exists.

Fibroids are non-cancerous growths that develop in or around the womb (uterus).

The growths are made up of muscle and fibrous tissue, and vary in size. They’re sometimes known as uterine myomas or leiomyomas.

Many women are unaware they have fibroids because they do not have any symptoms.

Women who do have symptoms (around 1 in 3) may experience:

In rare cases, further complications caused by fibroids can affect pregnancy or cause infertility.

Uterine fibroids are common non-cancerous tumors affecting about one in eight women that appear in or around the womb.

They are often no bigger than a pea and trigger no symptoms.

But in about a quarter of cases the growths trigger heavy periods, abdominal or lower back pain and the frequent need to urinate.

In these cases doctors may treat them using drugs but, if this fails, complex surgery will be needed to have them removed.

For women who want to have children in the future, they are offered a myomectomy — which sees growths removed from the uterus. But in more extreme cases the whole uterus may need to be removed entirely.

The exact cause of fibroids is unknown, but they are thought to be linked to the hormone estrogen. Most shrink after the menopause when estrogen levels fall.

Women of African-American descent and who are obese are more at risk of fibroids.

Several studies have also suggested exposure to chemicals such as DEHP may raise the risk.

In the latest paper, scientists re-analyzed data from a previous study conducted between 2006 and 2015, which surveyed 780 premenopausal women.

It monitored symptoms they faced and analyzed urine samples for the presence of DEHP and other phthalates.

In the second arm of the study, fibroid tissue was taken from 48 premenopausal women who underwent surgery to remove the growths.

Cells were then separated and exposed to phthalate levels that matched those recorded in urine samples.

Chemicals they were exposed to included MEHHP, which is made when DEHP is broken down in the digestive tract.

Cells exposed to higher levels of the chemical were found to grow faster and be less likely to die.

Corresponding author Dr Serdar Bulun, an obstetrician, said: ‘These toxic pollutants are everywhere, including food packaging, hair and makeup products and more, and their usage is not banned.

‘These are more than simply environmental pollutants. They can cause specific harm to human tissues.’

The European Union has outlawed the use of DEHP in cosmetic products, and all other products.

In the US its amount in products must not exceed one per cent of its weight.